One of my favourite new trends in tourism is that regions are beginning to establish routes or trails so that independent travelers can create their own food themed vacations. But I’m not sure there are any more up my alley than Stratford’s Bacon and Ale Trail.

You win me over immediately with pork and pints. And although I have followed many food, wine and beer routes this one was a bit different in a really great way.

ALSO READ: The Best Places to Eat in Stratford Ontario

Usually when you tour wine country or a craft beer route you need to hire a driver or enlist a friend to volunteer as the designated driver.

However, most of the Bacon and Ale Trail participants are a short walk from each other in downtown Stratford and the others are just on the outskirts and pork focused so no need for a DD.

My recommendation is to go there first so you can park your car in Stratford enjoy a day walking around. 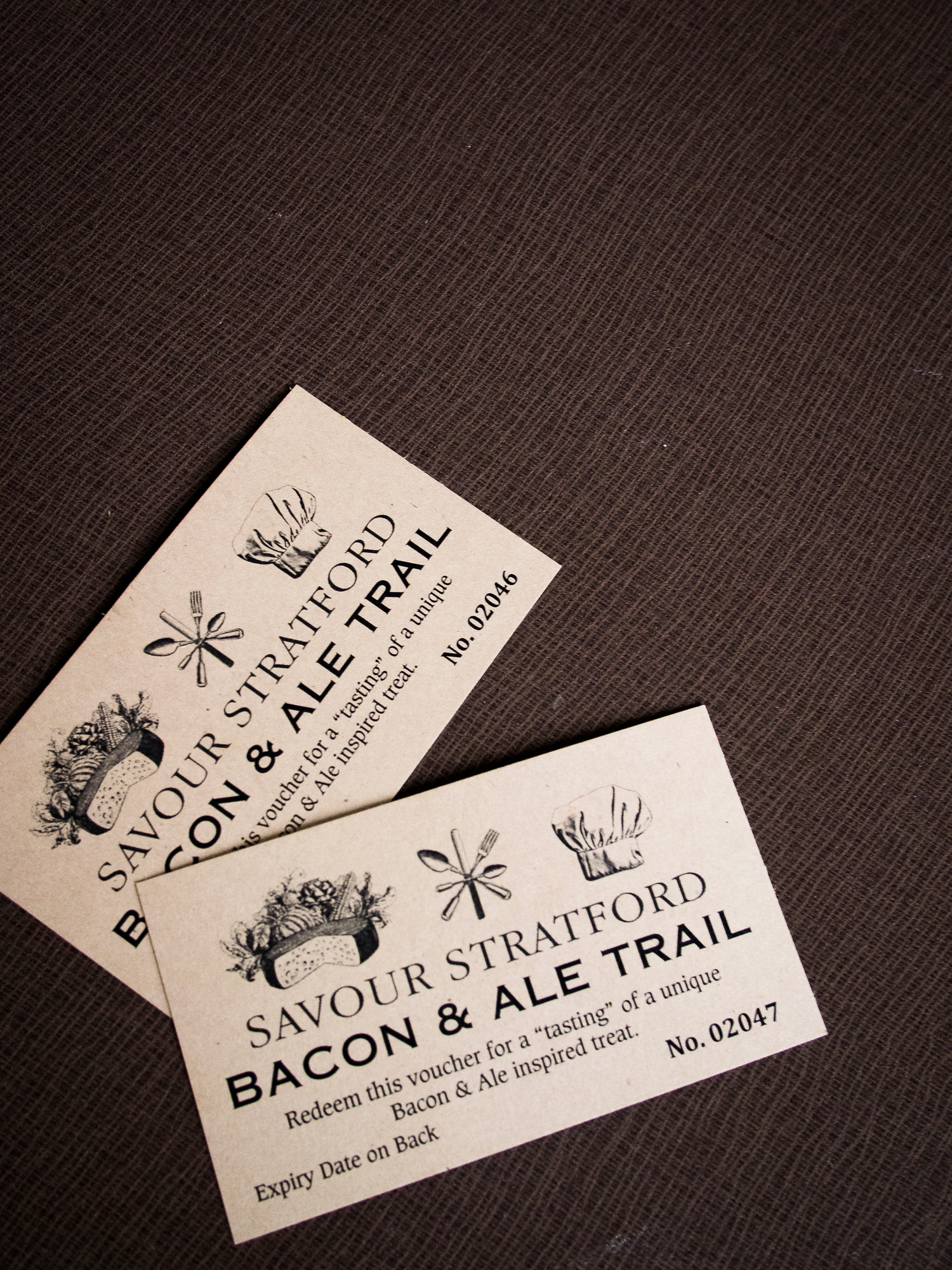 How the Bacon and Ale Trail Works

A pass costs $30+HST and you can choose five locations on the trail. You can order online and then redeem at the Stratford Tourism office.

There’s no pressure to do all five stops on one day as the pass lasts one week from redemption.

There are 13 possible stops on the bacon and ale trail. There’s an asterisk for locations I did not visit but based on what I did see I don’t think you could go wrong with any of them.

Locals rave about the 14 signature burger options and the commitment to serve craft beer, local spirits and Ontario wine.

Here you can try a small Bacon Jam Poutine with crispy fries, cheese curds and bacon jam made from Black Swan EPA brewed across the street. Available from 2-4pm every day it’s also generously paired with a Black Swan EPA.

Black Swan beer is not available at the LCBO, sadly locals are drinking ALL of it – but that’s one more reason to come to Stratford.

Here it’s available on tap in many of the restaurants and pubs in town. At the brewery you can use the Bacon and Ale Trail pass for a mini tasting flight of 4 seasonal craft beers.

It’s a busy place with most locals popping in to buy growlers, chatting with staff.

The founders were two teachers who were home brewers that took things to the next level – it’s so easy to get lost in the fantasy of doing it yourself – if only you knew how to brew beer.

Also have a look at the t-shirts with the softest fabric; I couldn’t leave without buying Dave beer and a t-shirt. 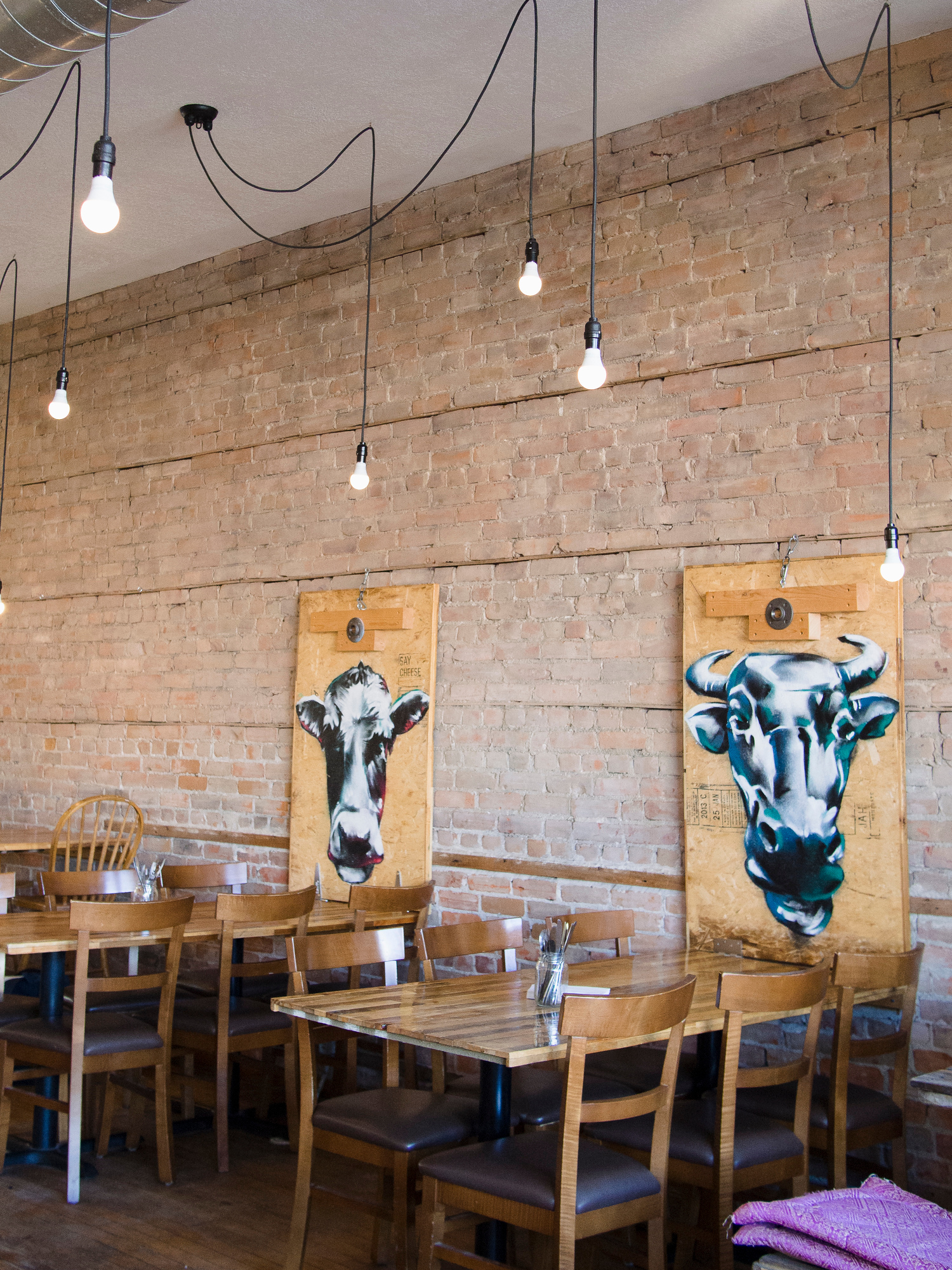 Monforte has a well established named in Toronto and are at most of the farmers markets but I love their location in Stratford. It somehow blends Canadian agriculture with the feeling of an Italian wine bar.

Monforte offers house-made charcuterie featuring pork from David Martin’s whey-fed pigs, alongside Monforte cheese and an Ontario craft beer. If it’s sunny out ask if you sit on the patio in the back.

This is not the only location for this Canadian chocolate company and they’re well known for their diverse offering.

They really do have something for everyone – including candy and caramel apples to transport you back to your childhood, decadent chocolate dipped bananas and cheesecakes and so many options for food souvenirs or treats to take home.

On the Bacon and Ale Trail they offer a decadent chocolate covered toffee with smokey bacon flavour. There are so many things that I like about this description: smoke. toffee. bacon. chocolate. 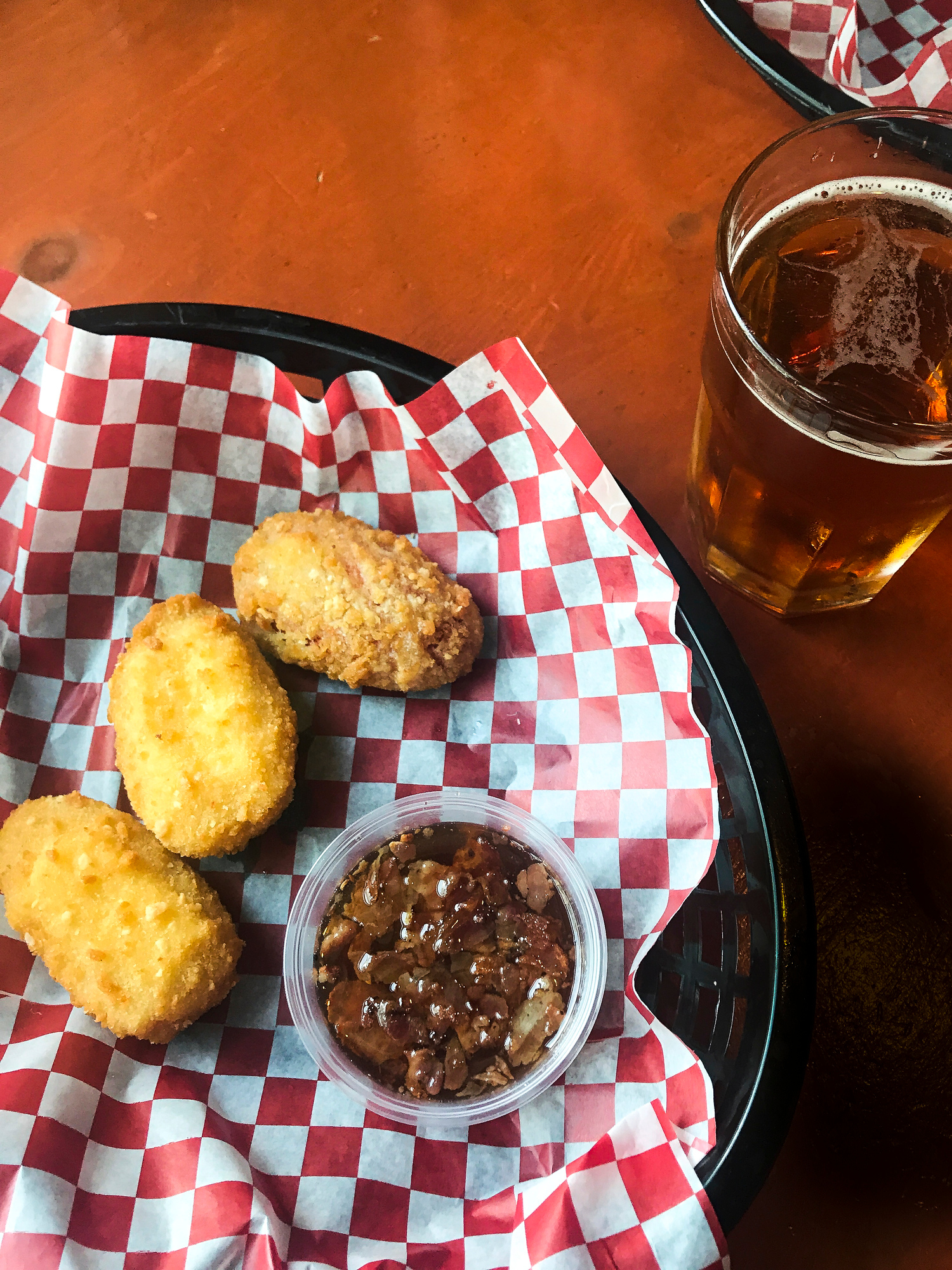 Known for its award-winning wings, so many people in Stratford listed the Boar’s Head as their favourite late night spot.

It’s housed in the historic Queen’s Inn, which is family owned, which often doesn’t mean much but here there is a real sense of community.

Barb Ford (one of the owners) who may be one of the sweetest people I’ve ever met, has a daughter that is celiac and staff take it seriously so don’t avoid this pub if you’re gluten-free.

What is it about jalapeños stuffed with cheese that is so addictive? Definitely on my list for top 5 deep fried foods.

A cute funky shop specializing in local handmade items, Justin Bieber fans must stop here to visit an entire section of the store dedicated to him.

If you’re looking for something unique they feature local makers creating nostalgic and retro items that are great for gifts.

This stop features a soap made from real beer, which you can wash your hair with or shave along with an instagram friendly BeerMo bottle moustache. 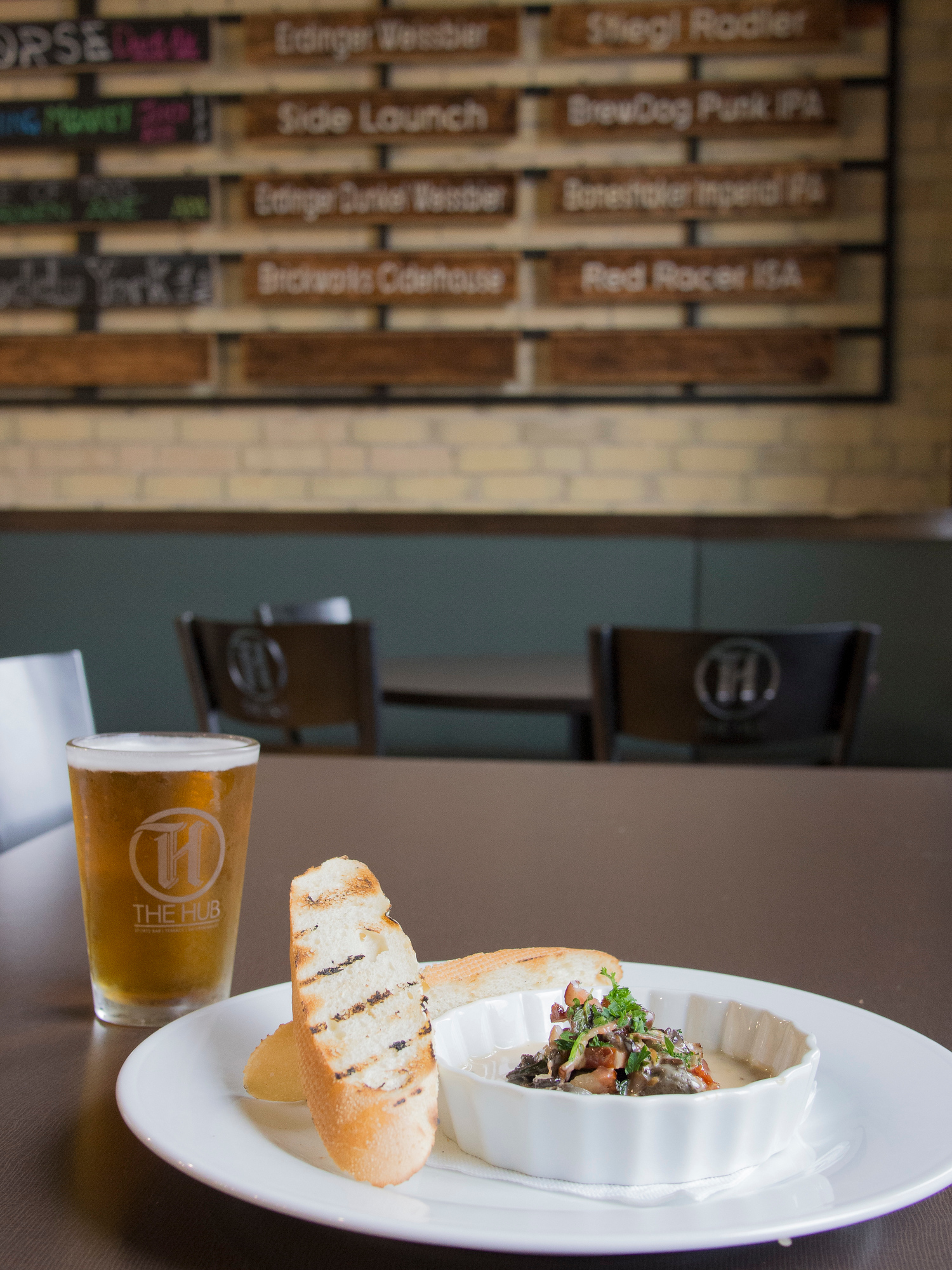 Located above Bard’s Steakhouse it’s easy for tourists to pass by the location. However, locals know it well.

It has a European beer hall feel with a vast menu of international beer. Burgers are freshly ground and they make all their sausages in-house and you can get a sausage board on Saturday before 5pm for $10.

With daily specials and a weekly open mic this is a family friendly location. There are vegetarian options as well as gluten-free buns for those with food restrictions.

On the Bacon and Ale trail you can try the escargot fricassee served with bacon, mushrooms, sherry cream and garlic bread paired with a Leffe Blondé Abbey Ale. 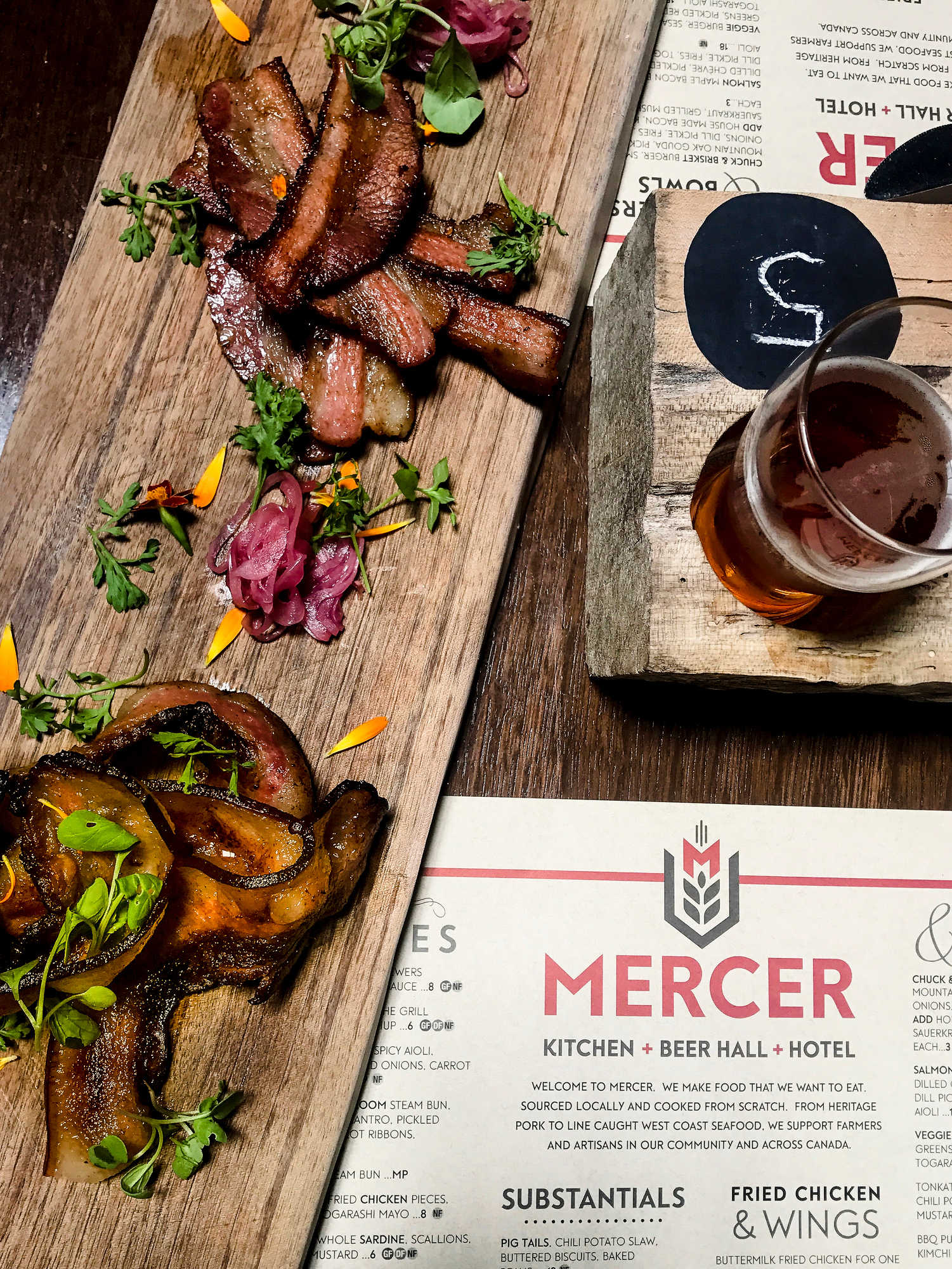 I love that Chef Ryan O’Donnell’s time in Japan influenced the menu, which features familiar items with a Japanese twist.

Although we came for the Bacon and Ale Trail I couldn’t help but also try the most popular item – the pork steam bun.

The menu here is great because it’s large enough for someone like me to find interesting things I’ve never tried but also satisfy timid diners with items like chicken wings and fried chicken.

Beer lovers will love the depth of the offerings with 14 beers on tap, cask, and a deep bottle and can list. For the beer-adverse there are also cocktails and VQA wine.

The bacon and ale trail offering is true to its name with two types of artisan bacon – Churchill Farm smoked bacon and Mercer’s dry cured tesa (unrolled pancetta cured for only a week) paired with 6oz pour of a local craft beer.

Yet another story of a small entrepreneur, Kandy Cosstick makes incredible fondant cakes and cupcakes at her shop on York Street.

These aren’t your average cupcakes with a local taste such as strawberries in season.

On the Bacon and Ale Trail you can choose two large cupcakes on the trail. To stay on theme get the Sea Salt Caramel Bacon or Dark Chocolate Porter infused with Black Swan’s porter.

Although if local strawberries are in season (she refuses to compromise and use frozen) you may have to get a third cupcake. 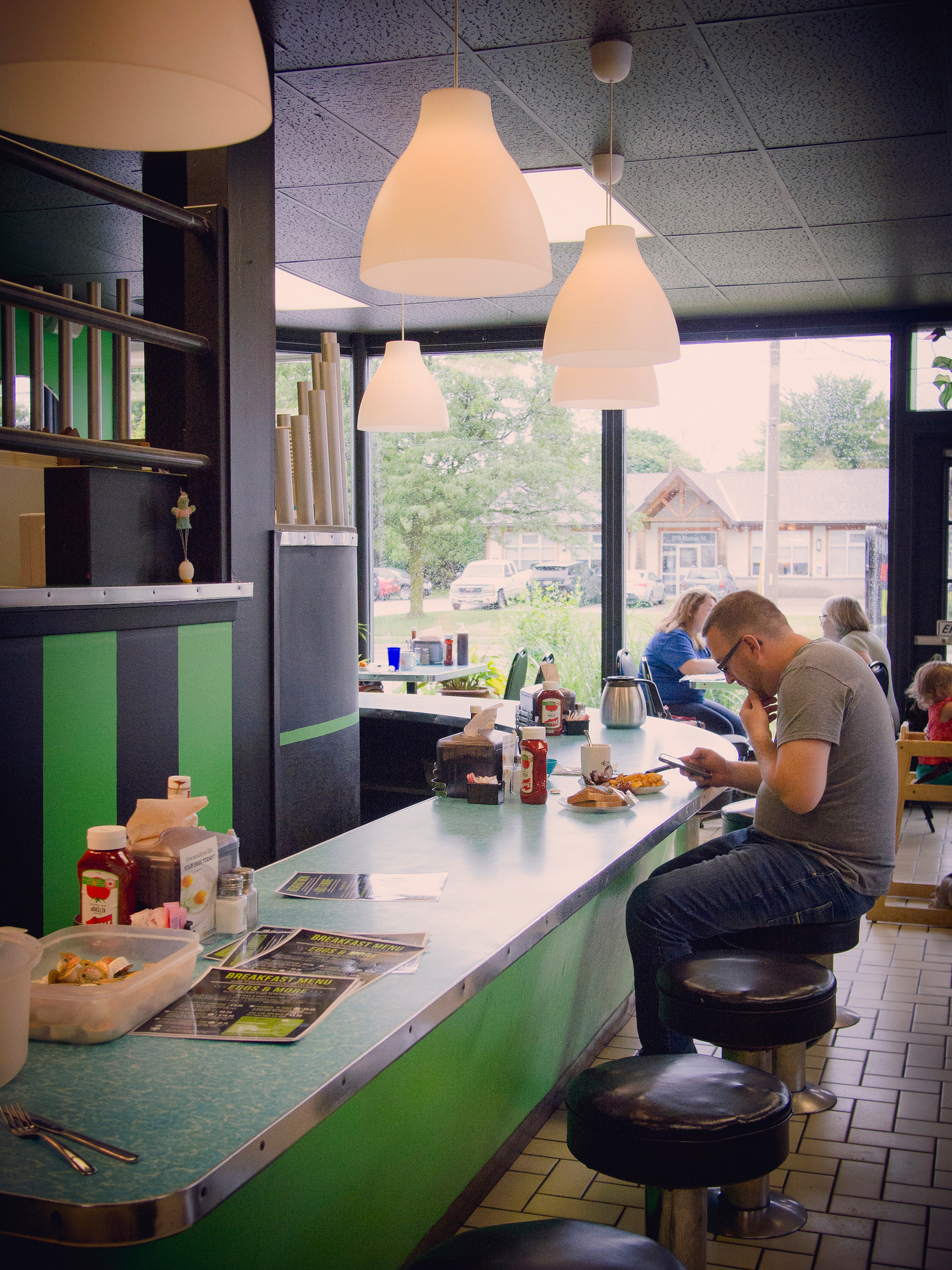 Bacon and Ale Trail Stops Just a Short Drive Away

If you want an authentic, family-owned, old school diner filled with locals you need to get to Madelyn’s. Locals come here just for the butter tarts and often for several if they’re visiting friends.

Madelyn’s has sold over 160,000 butter tarts since 2009. Waiting in line there was much discussion over which flavour was best.

But everyone agreed you wouldn’t go wrong with the Bacon and Ale Trail offering of a 1/2 pound butter tart.

Black Angus started as a popular local restaurant that also catered, so popular it needed to expand and when the space on Erie Street opened they jumped on it.

Now this second outlet offers so many different kinds of shortbreads it will make your head spin on which one to choose.

Fortunately they offer a mixed pack with both sweet and savoury. If you’re staying a while the bakery offers prepared meals made from scratch with a lot of gluten-free items.

They offer a dozen bacon shortbread cookies to bacon and ale trail participants – although I suspect you’ll want to pick up a few more things as well.

Although this is the farthest from Stratford’s city centre it is it’s own experience. The family farm has operated for over 160 years and specializes in many local products including maple, natural meats, home-made baking and preserves and produce.

They offer a pound of their farm-raised bacon for the Trail participants.

ALSO READ: The Best Eats Outside Stratford in Perth County

If you’re coming from Toronto this shop is on the way to Stratford. You can’t miss the shop as instagrammable Percy the ten-foot pig statue will catch your eye.

Offering a number of pork products including Ayrshire bacon, pea meal back bacon, pork and bacon wraps, bacon burgers and smoked side bacon. If you’re not feeling the need for pork there are also lots of local baked goods as well.

They offer Trail participants 4 uncooked bacon Bburgers to BBQ and enjoy at home and a one-time 5% discount on other bacon meat products. 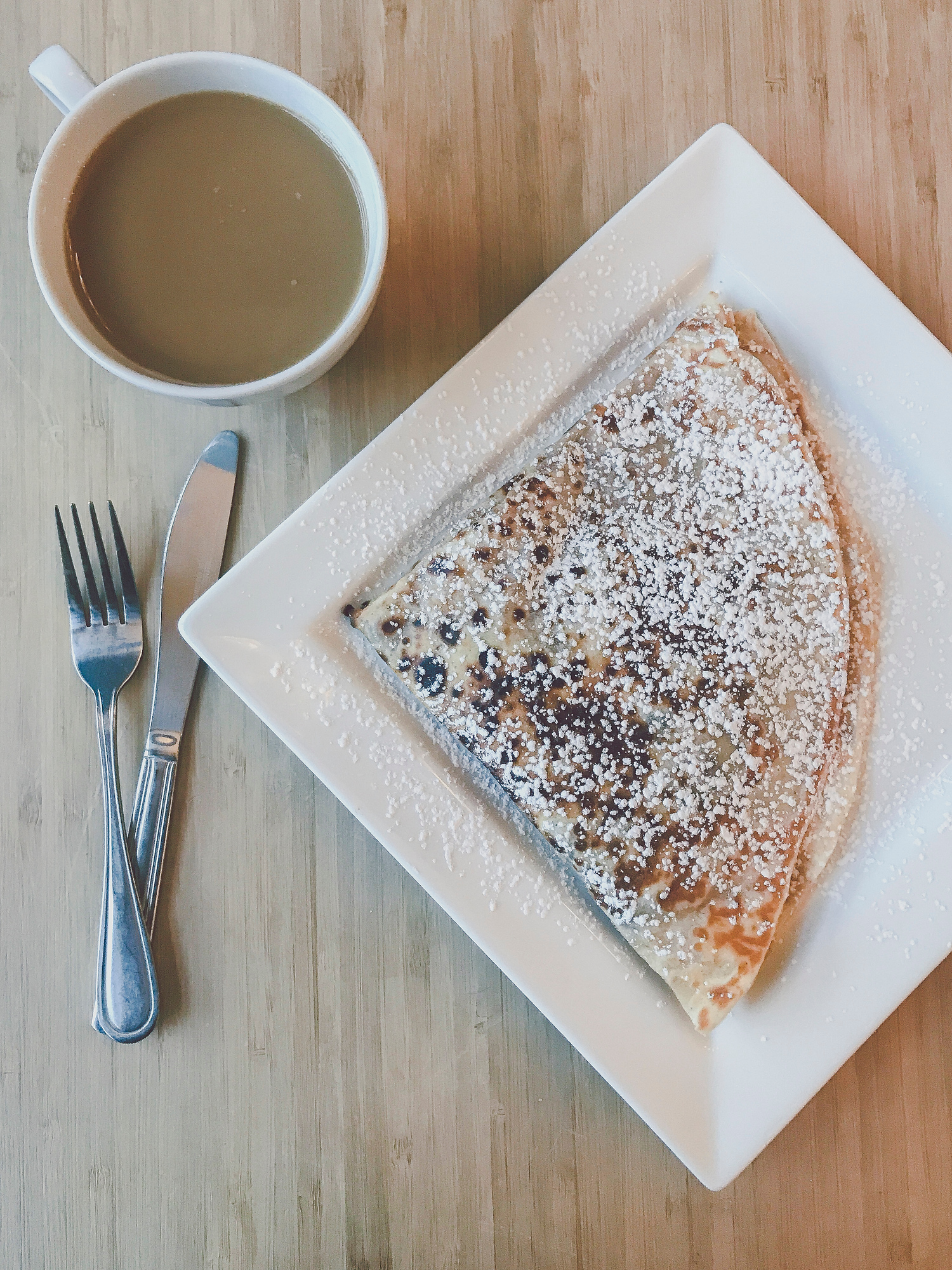 Although this is not technically on the Bacon and Ale Trail, it’s worth a non-pass visit.

A coffee roaster and cafe, it’s also home to fantastic sweet and savoury crepes including the peanut butter and bacon crepe…and if you are nice you can convince them to throw a bit of chocolate on it too.

If you have time to explore more then check out the Chocolate Trail, I have not taken it but chocolate pairs so well with bacon.

In addition, in autumn there is a pumpkin trail from September – October and a Maple Trail that runs seasonally March-April.

Also check out Christina’s post on other delicious food trails in Canada.

Disclosure: This post about the Bacon in Ale Train in Stratford was in partnership with the Stratford Tourism Alliance. However, they knew just how to win me over – with pork and pints…although now I’m eyeing the chocolate, maple and pumpkin. 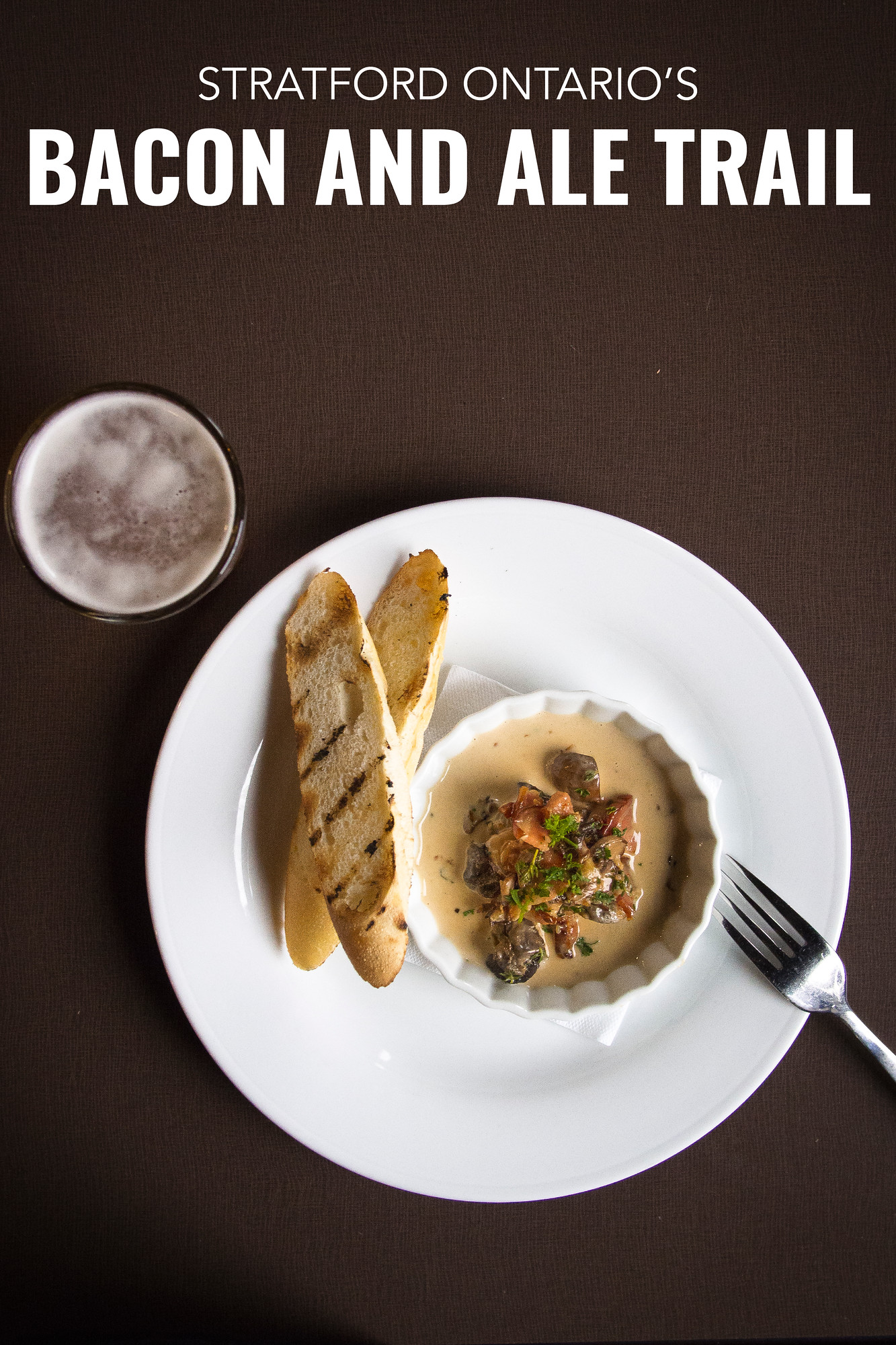