When I first started talking to Travel Manitoba about coming to Churchill I was warned that this was not polar bear season. In the dead of winter you can head out in the safety of a Tundra Buggy and see tons of them. But this was summer and it was beluga whale season.

And believe me the beluga whales are amazing and going in the summer is amazing. But there is still this little bit of hope that you may see a polar bear.

So when locals told us that there were some bears in the area I was getting excited. Polar bears in Canada get off the ice floats for summer but always begin to migrate toward Churchill because it is where the water first freezes and they are desperate to get on ice so they can hunt again. 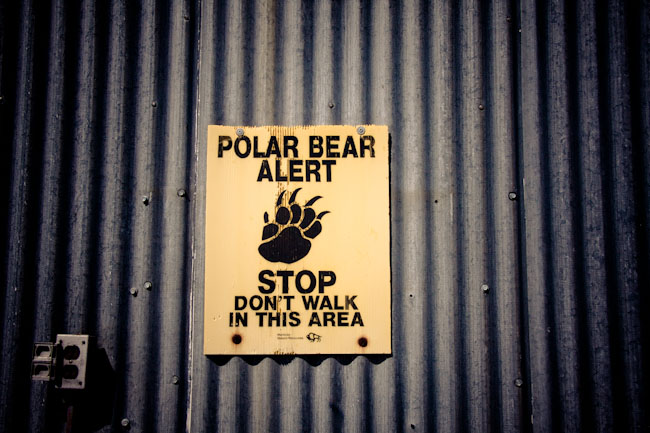 This is also why Churchill is very serious about safety in the town. Although it is patrolled, there are only a couple of streets you should walk on and you should never go down to the beach alone because if you are between the water and a bear you are done for.

Our Frontiers North guide also told us that none of the homes or cars are locked just in case you see one and need to get inside. And if one sees you, as you are running for your life throw off your hat, scarf or other pieces of clothing in hopes that the bear may stop to sniff it.

Most of all, don’t ignore the signs.

But that is exactly what happened our first day. A visitor decided to go to the beach, walking by the signs that said not to and he saw a bear, but then the bear smelled him and started after him. Luckily a conservation truck was coming by, got between the guy and bear and the man ran into a home.

Here is a video of him explaining the story, alas I wasn’t able to embed it on my site. But it includes the video he took while the whole thing was happening.

The story ends sadly. This bear was old, hungry and hadn’t eaten for a whole and got aggressive with the patrol so they had to shoot it.

It’s not something they like to do, in fact I have awoken to blasting caps going off scaring young polar bears away. For the most part they stay out of town.

But I still wanted to see one…from a distance.

And then I did. From a far far distance needing binoculars I saw one near the water. Too far to take a photo. Then we moved on to another location and saw 3 white dots even farther away. So exciting.

But Frontiers North knows as exciting as that is, it’s not close enough so today while we were out with the belugas we made a detour to a point where a couple of bears had been seen. 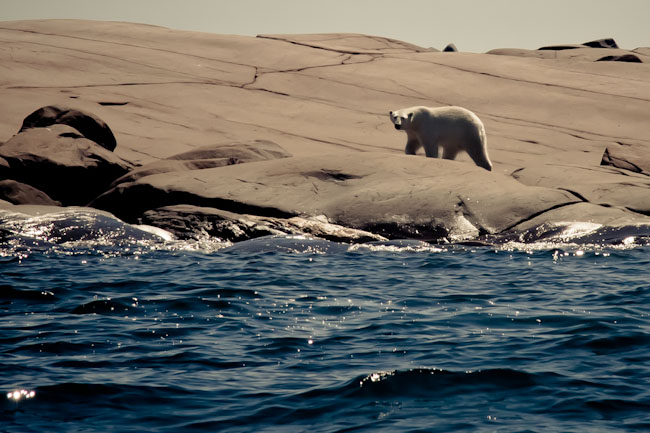 And here’s the photo.

Sure it’s a bit blurry. It was taken from a distance but that is how I wanted to meet one here.

I didn’t want the locals to be telling another story of a tourist that didn’t listen.