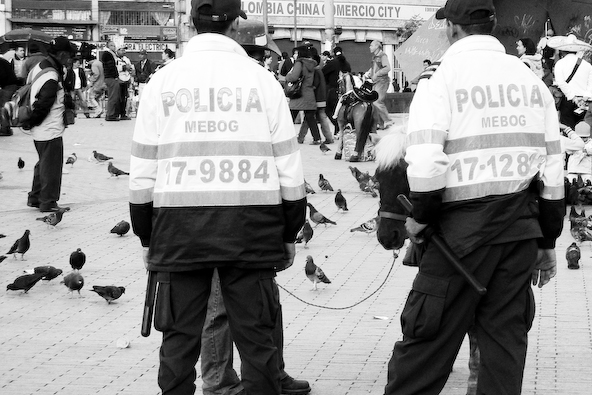 Not surprisingly I was feeling a bit deflated after hearing the robbery story that day. While earlier that morning I had decided to take out my DSLR, I resigned to the fact that I may not be able to safely take my camera out for a while.

Why do people want to rob me?

Unfortunately the day did not get better. After hiding out in the hostel for the afternoon I conquered my fear and went for dinner and drinks with Michael from GoSeeWrite.

After midnight I started walking back to the hostel with two girls also staying there. I had shared the news of the robbery that day so we were speed walking with determination.

And we dutifully turned the corner with suspicion, being prepared to turn on our heels if we saw a man wth a machete.

As we’re huffing it back to the hostel at lightening speed I hear a motorcycle behind us. I’m a bit paranoid as motorcycles are never good and with about 25ft to the hostel it catches up and I see that it’s the police.

They must be escorting us to make sure we’re okay, right?

They tell us to stop and hand them our bags to search. They question us about where we’ve been and where we’re going.

After they find nothing I ask in Spanish if we are okay to leave, and the older policeman is puzzled and says “oh hablas espanol?”
I answer “si” and his expression changes and his face softens.

He stops questioning us and then launches into a big diatribe about how we should not walk alone and we need to be careful.

I explain that’s why we travel as a group and were walking so quickly.

He let’s us go and we wish him “buenas noches.”

It was one of the most peculiar situations I have encountered. I don’t know why he was surprised any of us spoke Spanish as often I speak the least Spanish in a group but I am certain it changed the dynamic of how we were treated.

For me it was an affirmation of why I wanted to learn Spanish, not only to communicate with locals but to be able to understand and communicate in situations such as these.

Safely inside the hostel gates one of the girls told me the same guy stopped a group of them the night before and searched them all.

What do you think?

« The Ethics of Being Robbed
Eating Lunch in Taganga »