Well I haven’t either, apparently Botero has several homes around the world and lives in Europe.

But you cannot travel Colombia without hearing his name or seeing his work as he is undoubtedly the most successful artist from Colombia.

Born in Medellin, there are copies of his work everywhere, but he’s also donated hundreds of pieces to the city. His work is very recognizable as he’s most famous for portraying very large people and animals. Many people have their photo taken with his sculptures, and there’s no shortage of hawkers who will gladly take your photo for a price.

But the most amusing aspect is that the human forms have genitalia and the men have oddly anatomically small bullet shaped ‘junk’ which seems to further encourage people to get a little pervy with the sculptures. 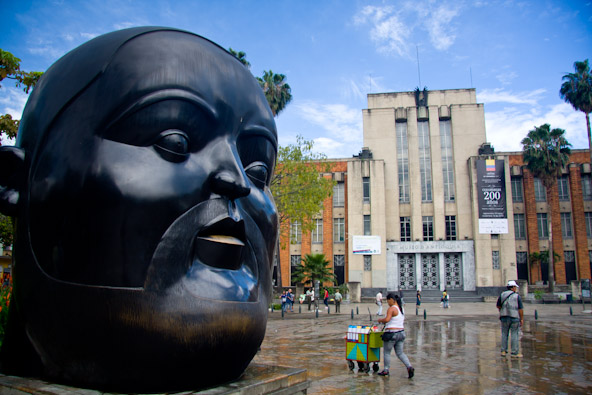 But like most famous artists, Botero came under fire for his use of ‘fat’ art but responded simply with the following:

An artist is attracted to certain kinds of form without knowing why. You adopt a position intuitively; only later do you attempt to rationalize or even justify it.

I thought it was interesting that you could apply this quote to much of life, who knows why we do things, it’s only afterward that we try to make sense of it.