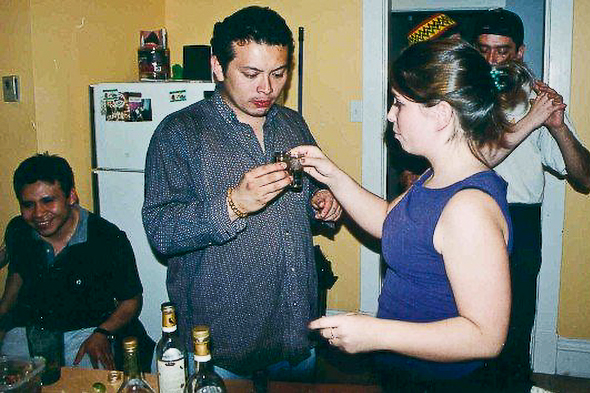 I met my first Casanova nearly ten years ago. I was fresh out of university with a contract position in Halifax.

After a quick search I found a group of people looking to share a house and within 15 minutes of meeting them I called my Mother to tell her I was moving in with four guys from Mexico – she knew better than to question me.

Juan Carlos Perez-Casanova, like the others, was in Halifax for his PhD. He spoke the best English so we quickly became friends.

He tolerated me constantly nagging him to eat a green vegetable every day and was sweet enough to tell the loser who bought me Valentine’s Day roses after one date that I wasn’t home when I really was sitting next to him.

I also have an embarrassing drinking story where I threw up into my side table and Juan Carlos made me bring it back inside the house after 3 days of rain for fear of warping wood, but that’s for another post.

I’m sure he would say the most important thing he taught me was never to drink the clear tequila.

So when I realized it was possible to go to Campeche, his hometown, I immediately asked him what to do. The first thing on his list was to visit his family’s restaurant, Potros. I’ve been to many taquerias during my time in Mexico although none without red plastic chairs.

Potros will be the nicest place I eat this year I’m sure. Juan Carlos suggested I eat Portada Feliz, his brother scoffed at my request for water and suggested horchata a drink made from rice and coconut although I’ve been told most restaurants do not include the crucial coconut. Portada Feliz blew me away.

Despite so many ingredients they all melded together for an intense earthy flavour and I regretted eating lunch and later Mexican antojitos.

This may be lame but I was so excited to see mushrooms as I hadn’t had them in weeks, convinced they did not grow in Mexico. Guadalupe came by to give me a big hug and talk.

Her English is about as good as my Spanish and she was so kind as she slowly spoke and waited patiently while I thumbed through my dictionary, trying to express my gratitude for the meal and her son.

As only a mother would, she insisted that Jose Maria drive me back to my hostel. A round of photos and lots of hugs were exchanged and I was sad to go.

Jose told me I was welcome to come back anytime. I promised the next time we would speak in Spanish.

Seeing Juan Carlos’ city and family has been truly a highlight. His family was so kind and I can see why he’s such an amazing person.

I can only hope that now that he’s engaged his fiance makes him eat more green vegetables.

« Campeche: The Greatest City in Mexico You Haven’t Heard About
Must Try Street Food in the Yucatan Peninsula »