I arrived just in time to judge the Maui Agricultural Festival but before the event I met the other judges and we went to tour the Maui Gold Pineapple Farm.

Is there anything more iconically Hawaiian?

The first thing that caught my eye was the pineapple express bus, and I was relieved I wasn’t the only one to pass an immature giggle before we started the tour. I learned cute facts like that pineapples are not native but from Brazil.

They were named pineapple because they look like a pine cone and taste like an apple. And that you should never cut the top off but twist it and store it upside down so that the juice from the sweet bottom can resettle throughout the fruit.

And I expected this to be a light breezy tour, but that soon ended when I started thinking about how much we pay for food.

I won’t buy a pineapple if it costs more than $3.99 but I had no idea what actually goes into growing one.

Turns out a lot.

It takes two years to grow the first generation pineapple. It’s only one year for the next but the following fruit is much smaller. Pineapples are still planted and harvested by hand.

Relatively speaking the workers are the mostly highly paid in farming. Most plant 7000 pineapples a day and can make $40/hour.

But this is a young man’s job as most of the day is spent bent over. They only plant three times a week and I’m guessing on the other days they are at the chiropractor.

This is not an easy job and I’m sure they pay for it later in life. 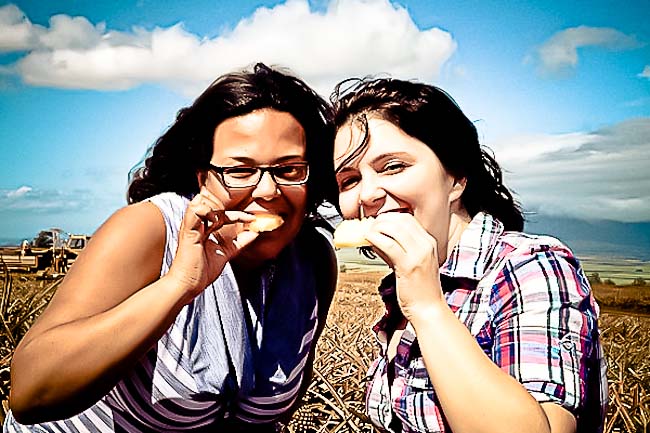 We tried different types of pineapple and it was delicious but all I kept thinking about was the manual labour and two years of growth. I will never complain about the price of pineapple again.

« Chef Sheldon Simeon’s Star Noodle on Maui
Where Have All the Farmers Gone? »