Checking out Bembos, the Peruvian fast food chain was a savior on a long, strange day. My re-entry into Peru has been an eventful 12 hours, which included:

1) My first bus taking off with my backpack but without me.
2) My second bus not having record of my reservation which lead to me begging them not to leave me at the border at 4am and instead sitting in the bus stairwell for hours.
3) Ultimately being propositioned by my 60-year old bus driver.

Arriving in Piura, I was dressed for the Ecuadorian Spring-like weather and unprepared to be kicked in the face with a heat wave.

I did the only logical thing, headed to the air conditioned mall and ate in the food court.

And so we have round two of local fast food vs. the big McDs. While I don’t like McDonald’s it is a fierce competitor; Colombians professed that El Corral was superior but I wasn’t convinced.

Bembos arrived in the late 1980s and was the only local chain able to keep up with the international burger joints, perhaps because it was wise enough to offer such toppings as egg, ham, pineapple and sauerkraut.

Also aji! I can’t get enough of this pepper sauce. In addition to fries you can get yuquitas made from yuca root.

Today there are over 50 Bembos throughout Peru. They stay competitive by not copying McDonald but sharing the local flavour of Peru.

I chose the double cheese burger with bacon. I hadn’t intended on paying extra for bacon but I didn’t entirely understand the girl and did what I always do in that situation – nodded in agreement. 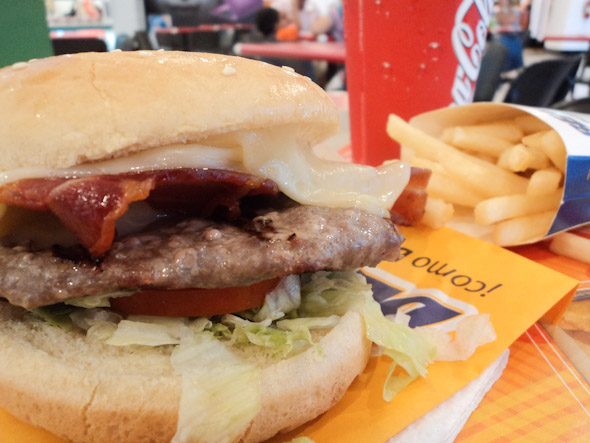 Assessment:
The fries are identical to the thin, crisp McDonald’s fare but Bembos has a slight edge with the offer of both ketchup and mayonnaise.

The burger itself was impressive. The double cheese was real and not the plasticy singles. It has a homemade quality feel that reminded me of of A&W and all I needed was a root beer.

On the downside I’m a salt fan but the Bembos Peru burger was far too salty. I started to feel a pang in my arteries.

To be fair I had just ordered “seasoned” meat topped with processed meat and cheese. I knew a bit of salt was to be expected but not as if I licked the Bolivian Salt flats. It was all a bit much and I couldn’t finish the burger.

Verdict:
I’ll probably never eat it again but Bembos wins with a slight edge of quality cheese and mayonnaise on the side.

Interested in Peru: Check out 5 Reasons You Must Visit Northern Peru