Who wouldn’t want to eat all the food in Singapore?

If there’s one thing I miss most when I travel, it’s the food of my home town, Singapore.

Out of the South East Asian countries, Singapore is often considered one of the more expensive places to visit.

But compared to most other countries in the world, it’s still relatively easy to find a diverse plethora of cheap good street food that’s available anytime here in Singapore.

If you want the quintessential Singaporean food experience but have limited time and a tight budget.

Here is a list of my biased top 5 Singaporean foods you can get for under S$5 (US$4) – trust me when I say that narrowing down this list was HARD because of the myriad of options available, but this is what I would take my guests out to eat for the Singaporean experience.

BREAKFAST: Half Boiled Eggs, Kaya Toast and Kopi (photo above)

Runny half boiled eggs with a dash of soya sauce and pepper, alongside crispy toasted bread spread with kaya and butter.

This seemingly odd combination of foods are one of Singapore’s most traditional and favourite breakfasts. Commonly referred to as a Breakfast Set, a standard one usually comes with 2 half boiled eggs still in their shells, crispy browned toast with coconutty kaya spread and a bit of butter, and topped off with a steaming cup of kopi (coffee) or the (tea).

Crack your eggs into one of the two saucers that it will come with – You’ll want to ensure that your eggs are properly runny and not too undercooked (where the egg white is still clear) or overcooked (hard egg yolk). Mix it up with a dash of dark soya sauce and pepper for flavor, stir with your little teaspoon and slurp it up. I like to dip my kaya toast in for extra flavour.

Most coffee shops (known locally as ‘kopitiams’ – check out this post for more unique lingo only found in Singaporean kopitiams) only sell this in the morning during breakfast time, but it’s gained popularity in recent years and several specialist chains have popped up so you can enjoy a Breakfast Set any time during the day. You don’t even have to brave the heat of the open-air coffee shops even, as many of these chains can be found in the malls! Some of these chain store menus offer fancier bread options (French Toast instead of Kaya Toast) but it also costs twice as much as your average coffee shop.

This spicy seafood noodle soup dish Laksa has its roots in the Peranakan culture, that of the ethnic Chinese who settled down in the Malayan straits.

You can find an Assam version in Malaysia, but Singapore is particularly popular for the Nyonya version, or what’s known in Malay as ‘Lemak’, which refers to the rich coconut milk taste in the soup.

Expect to find cockles, shrimp, fish sticks and some bean curd along with your noodles.

What’s unusual for Katong Laksa is that all you need to eat this noodle dish is just a soup spoon – the noodles are cut into short strands that you can scoop into your mouth quite easily.

It’s also garnished with coriander and additional sambal chilli on the side if you like it spicier.

This dish is better known as Katong Laksa because most of the good stalls serving this dish are found in the Katong area on the Eastern side of Singapore and popular as a Peranakan heritage area.

Which stall was the original creator is is debatable, and who serves the best Katong Laksa really depends on your individual taste.

The stalls are mostly located along the same stretch of road, so if you’re in a group, consider hopping from stall to stall and sharing your portions so you can truly decide for yourself which bowl of Katong Laksa is the best.

Hainanese chicken rice should more accurately be known as Singaporean chicken rice because you can’t find it in Hainan or anywhere else in the world.

Chicken-broth flavoured rice topped off with either steamed (White Chicken ‘Bai Ji’) or roasted chicken (‘Shao Ji’) served at room temperature and drizzled with a bit of sesame oil and some cucumber slices.

It’s usually served with a complimentary bowl of chicken broth soup if you’re eating in.

Garnish with dark soy sauce or the garlic chili sauce for added flavor, and even if you’re health conscious, do eat some of the chicken skin like you’re supposed to.

You can even choose your preferred part of the chicken when you order, just remember that the drumstick usually costs a little extra!

Most stalls can do a fairly decent chicken rice, but I find the secret to true awesomeness really lies in getting the rice right – flavorful, separated grains, but not too oily.

Chicken rice stalls are easy to find in hawker centres or food courts, there’s usually at least one dedicated stall and they are recognizable by the chickens and roast meats hanging in their windows.

The humble roti prata is essentially a fried piece of flour usually hand-flipped on a flat grill, almost like a pizza.

It is one of the most flexible meals you can have and because prat a shops tend to be 24-hrs, they are good for any time of the day.

Similar to Malaysia’s Roti Canai, Singapore’s roti prata is outstanding due to sheer creativity, where the humble piece of dough has evolved into a complete meal in itself.

The traditional style is ‘kosong’, a plain version which is dipped in a vegetable or meat curry, or sugar if you like it sweet.

I like to get my prata with an additional egg cooked into it, and even then you can request for something called ‘plaster’, where the egg is literally plastered on the surface and still runny if you like that sort of thing.

These days, roti prata menus are pretty extensive, you can throw just about anything on one: more common ingredients added on are cheese, sausages, mushrooms, onions, or even sweet condiments like chocolate sauce and ice cream!

Prata styles even have their own names: ’tissue’ usually refers to a really thin and crispy prata, almost wafer like; ‘prata bom’ is a denser type of prata that includes condensed milk and butter

If you have some space left over after your meal, I suggest topping it off with my personal favourite drink – the Milo Dinosaur, a malt chocolate drink that comes with a whole pile of extraneous chocolate powder undissolved on top, just because it’s awesome. 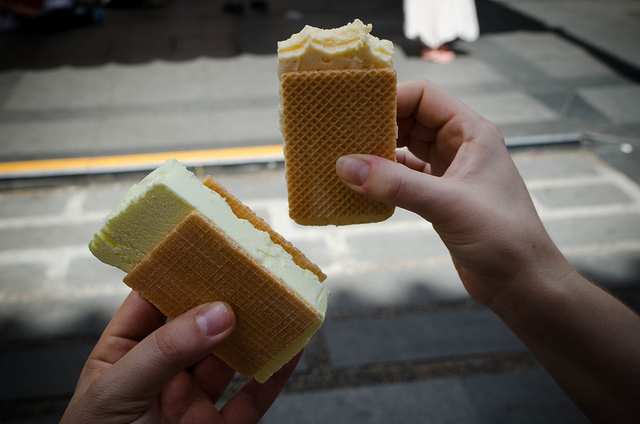 And if you have $1 to spare after all that food, look out for these little ice cream vendors with their umbrella-covered carts usually found on the sidewalks for some dessert!

The charming thing is that the price of the ice cream has remained at S$1 for about as long as I can remember (don’t buy from those trying to charge you $1.50!

Orchard Road, Clarke Quay and other tourist areas are chockfull of these vendors, and they are the perfect way to stay cool on a hot day.

Get your ice cream in a traditional sugar cone or cup, but my preferred way to eat them is either ‘Wafer’ – a block of ice cream sandwiched between 2 pieces of airy wafer (the block can be pretty hard at first, but eat fast, these things melt quick!) or ‘Bread/Mian Bao’, where the ice cream is scooped into these odd soft breads with multi coloured swirls.

There you have it – food in Singapore:  a fun and cheap way to experience the country up close and personal. Have you been to Singapore?

Tell us what are your favourite cheap eats – if there’s one thing we like almost as much as eating, it’s debating where our next meal will be and who makes the best version of it.

(Definitely don’t diss it! We’re really proud of our food culture here – more tips on other things that piss off Singaporeans here).

Jaclynn Seah is The Occasional Traveller, a Singaporean girl and deskbound wanderluster with a full-time job who hopes to remind other working professionals like herself to get out and travel more.