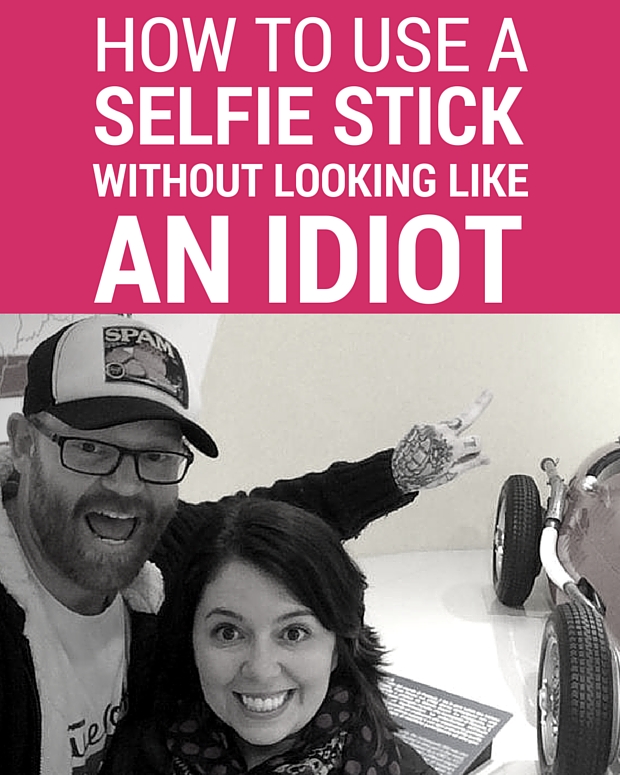 We landed in Italy without ever having heard of the selfie stick but it was a fast and furious introduction in Rome as we were bombarded by street sellers pushing them in our face once they realized we were the only tourists in Rome without one.

We first turned our travel snob noses up passing tacky tourists foolishly taking photos and waived the street hawkers with disdain. But 24 hours later they started to look list a good idea. At 5′ tall I certainly don’t have the arm span to take photos and Dave is no giant either. The Oatmeal Weighs In

Reluctantly we decided to get one and as the street hawker explained how to use a selfie stick and connect the bluetooth remote to the phone I was already hooked. This was perfect for travel selfies. He wanted 25 Euro for a selfie stick but Dave haggled down to 13, we knew we could have haggled more but we thought $20 was a fair price.

We learned quickly that the best way to take photos was for him to put it into position, me to hold it steady and then hit the remote. Otherwise the photo can be a bit blurry as you try to keep an iPhone three feet away perfectly still. It takes some practice.

You Know You Want One

It’s not surprising that selfie sticks have been banned in most museums, Brazilian soccer stadiums and many music festivals.

We also learned that it’s banned in the Colosseum in Rome, but hey there’s no ban outside!

Selfie sticks are basically just monopods, extreme sports athletes have been using them for ages for action shots and video. But with the selfie trend spreading faster than the Bubonic plague it was inevitable that we evolved past the outstretched arm into an extendable stick.

Selfie stick has a built-in bluetooth remote shutter.One of the biggest issues with selfie sticks is that you need to remove your phone from its protective case and it’s terrifying to think it could drop and shatter on beautiful European cobblestone.

Selfie stick and a bluetooth wireless remote shutter is what we bought. It’s pretty easy to set up and Dave and I had no issues with it although I’m sure at some point the remote shutter will need a new battery. But this is still my favourite option as you could place your phone down and take a shot 10 feet away without the selfie stick.

Plug and shoot selfie stick. This option doesn’t have the remote device which is awkward but also means fewer technical difficulties. Insert the cord into your headphone jack and take pictures with the remote shutter control on the handle. There’s also an adapter mount regular cameras.

Selfie sticks may be obnoxious and maybe even err on the douchey side but we don’t care, it gives us an opportunity to take photos without harassing a fellow traveler to take a horribly composed shot. I saw a nun trying to take a photo of herself outside the Vatican and she couldn’t get everything she wanted in the shot – that nun needed a selfie stick!

There are nearly 1 million photos on Instagram tagged #SelfieStick

If we all agreed upon a few rules of selfie stick etiquette I think we could learn how to use selfie sticks without being completely narcissistic travelers.

1.  Don’t use them in crowded spaces, it’s rude to take up so much space or poke someone’s eye out  while you turn to get just the right angle. Don’t whip it out and hog the view, be mindful of your surroundings and other travelers. You aren’t the only one trying to take photos.

2.  Don’t use a selfie stick indoors, do you really need a photo of you next to the Mona Lisa? Probably not.

3.  Let’s all agree not to use it near cliffs, subway station platforms for anywhere else that is too tempting to step back and plummet to our death.

4.  Have some cultural sensitivity, it’s not the place to pull out in cemeteries, disaster sites or war zones. I was shocked I saw people posing with smiling faces at the 911 Memorial in New York.

5.  Be aware it puts you and your phone in a precarious situation as it’s easy for thieves to snatch and run. As someone who has been robbed in Vietnam, robbed in Nicaragua and with my sister when she was robbed in Quito, Ecuador I’m wary of tempting thieves by dangling expensive goods.

6. If you’d rather ditch the phone, check out these useful GoPro accessories.

One final word of caution:

Selfie Sticks Can Be Dangerous