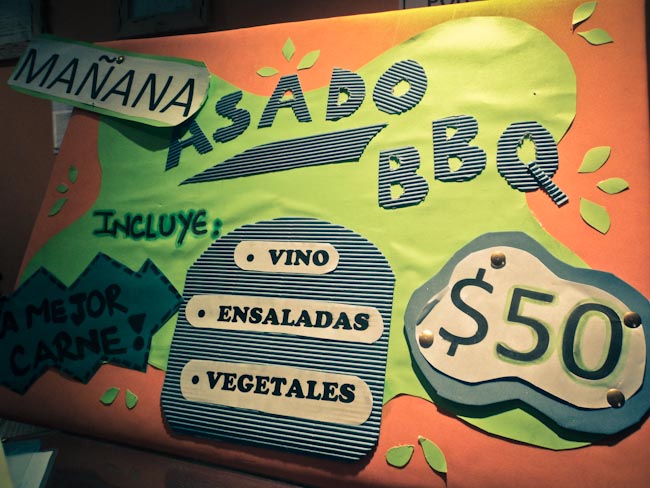 It turns out if I wanted to see Salta in Argentina it was easiest to travel from San Pedro de Atcama, at least that is what Coca told me and she is always right.

I embraced the change in itinerary, for the last year all I had heard about Argentina was that the steak and red wine were incredible.

After months and months of chicken, with only a brief break with pork in Ecuador, I was ready to move onto beef with lots of chimichurri sauce.

I was in luck, there was an asado at my hostel that weekend. Asado means barbecue and this was a hostel with a lot of Argentine’s so expectations were high.

Asados are not just simple barbecues, often on the weekend they are three-hour long events and are taken very seriously.

There’s something so throwback about a big meat event that I gave a vintage tone to all the photos.

I grew up in a culture where everything needed to be no carb, no fat, no sugar no flavour and there’s something salacious about an event that’s just dedicated to the pure love of meat, without thinking of what it may do to your waistline.

So off I went with Barbara from Buenos Aires and I knew she would be a tough critic as she explained the ‘rules’ of asado.

Men serve the meal and as hosts its their job to make sure wine is topped up and no plate is unwillingly empty. Salad is brought around first as a weak gesture to pretend that this could be slightly healthy.

Don’t laugh, just take a bit and play along.

The meat is served as it is ready. It generally means a few cuts of steak and sausage. They did not have organs at this barbecue and Barbara told me that was a big mistake as mollejas and other organs are almost always there.

However, she noted the meat was well cooked and as she doesn’t eat the organs anyway she could forgive the oversight.

The men also foolishly try to serve me potatoes and squash – I will not fill up on carbs in this meat feast but I do accept the roasted vegetables as I’ve learned never to turn down veggies in Latin America because you never know when you will see them again.

We finish with a bit of flan but I’m so full I know I need to choose between the flan and the rest of my red wine.

« How a Year of Travel Can Change Your Life
Where Have All the Hippies Gone? »