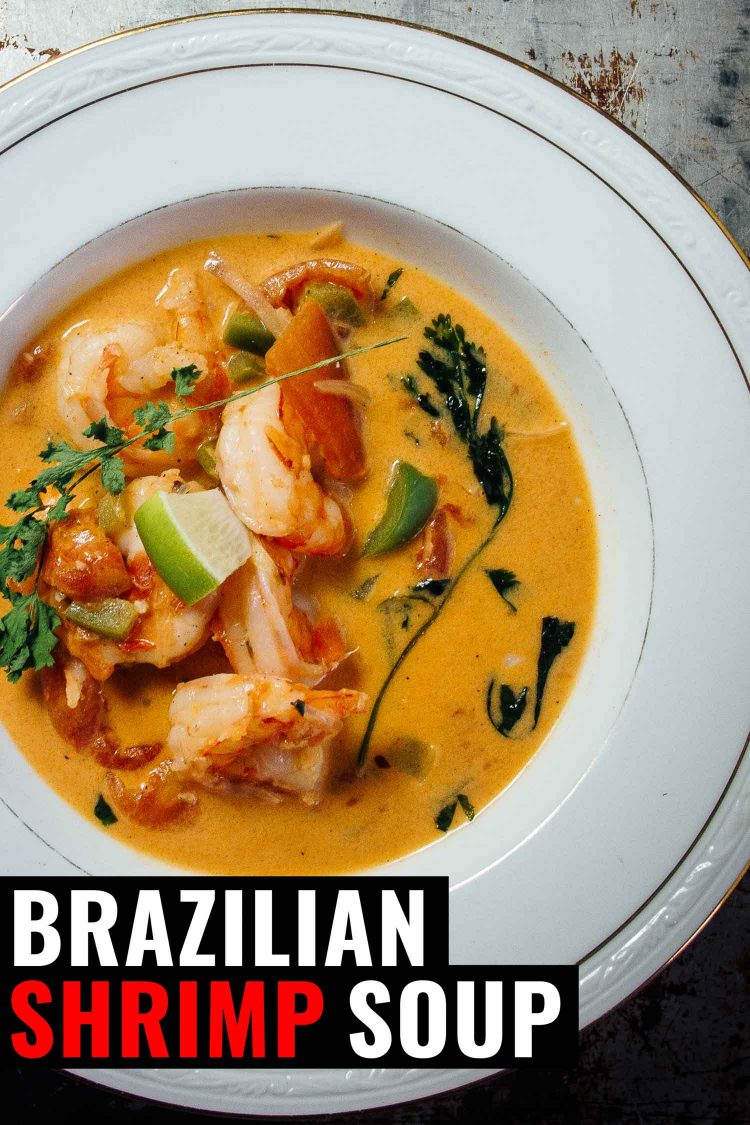 Colder weather is upon us, which means it’s soup season! One of my favourites is Brazilian shrimp soup.

While you may consider Brazil a country of sand and sun this is a dish from the Northeast region of Bahia that’s common in fall and winter.

One of the reasons I love South America is that it is so diverse in culture and history.

Brazil’s story is complex with influences from the indigenous culture, invading Portuguese and African slaves.

The food reflects this history and makes for dishes that aren’t well-known in other regions of Brazil.

Brazilian cuisine is literally a melting pot of cultures that brought ingredients and techniques from their native lands.

The biggest culinary influence in modern cuisine is from the African slaves who were brought to work in the sugarcane fields, coffee plantations, gold mines and to cook for their masters.

Beginning in 1530, nearly 4 million slaves came from West Africa until abolition in 1888.

With a mass influx of slaves over the years there wasn’t the same segregation that existed in South Africa or the United States.

And so over generations there were interracial marriages and today many Brazilians have some African heritage in their family tree.

Today the Afro-Brazilian culture is strong in Salvador, the capital of Bahia.

Most of the great traditional Brazilian foods, like the Brazilian shrimp soup known as moqueca de camarão were created in this state. This Brazilian cuisine reflects the indigenous, African and Portuguese history.

Moqueca – One of Brazil’s Most Important Dishes

Found throughout Brazil, each coastal village having its own distinct recipe.

The two most well-known moqueca are moqueca capixaba from the South and moqueca bahiana from the North.

The Bahia version more strongly reflects the influence of Afro-Brazilian cooks as it uses what is known as “the trinity” of palm oil, coconut milk and malagueta chile peppers.

It is a perfect storm of combining ingredients as the Portuguese brought coconut trees to Brazil and African slaves introduced palm oil, which gives a distinctive orange colour to the dish.

Why Coconut Oil Instead of Palm Oil

Known as dendê, palm oil is the world’s most popular vegetables. Unfortunately it is also an environmental and sustainability disaster.

Palm oil is extracted from the fruit of an African oil palm tree, which is originally from West Africa but now grows anywhere tropical.

Most of the commercial palm oil today comes from Indonesia and Malaysia.

Deforestation is a major concern.

The World Wildlife Fund says that 300 football fields of rainforest are cleared every hour for palm oil plantations and the endangerment of many species of animals.

The industry is linked to major issues such as deforestation, habitat degradation, climate change, animal cruelty and indigenous rights abuses in the countries where it is produced.

Both land and forests must be cleared for the development of the oil palm plantations.

Plantations are often touted as a way to help the economy in rural regions.

However, many indigenous groups are forced off their land, leaving them without any economic benefit or a home.

You can still buy palm oil in Brazilian and African markets but we can do better.

Bahia is known as the Coconut Coast and is the largest producer of coconuts in Brazil.

You can you can find it in a regular grocery store in the international section.

CHECK OUT THE:
Sao Paulo Market

What to Serve with Brazilian Shrimp Soup

This is a perfect, healthy weeknight dinner as it takes only one pot and can be made start to finish in 20 minutes.

But in Brazil a moqueca is meant to be shared with friends and family.

If you want to make it a special dinner serve it with traditional accompaniments: white rice and toasted manioc flour (farofa).

This isn’t from Brazil but snow crab cakes would also be fantastic.

A cold pilsner beer or caipirinha cocktail always make for a great pairing.

Disclosure: This was a paid partnership with Grace Foods Canada. They invited me to create a recipe using their Organic and Natural Coconut Products. I’ve used their products in the past and am happy to use them for the Brazilian shrimp soup. You can also find Grace Foods Canada on Facebook, Twitter and Instagram.