One of the few countries in South America that does not speak Spanish. Brazil is a country which has a diverse and varied population, and Brazilian cuisine is like none other in South America.

But there are also plenty of different areas in Brazil that are inland in farming areas or even in the tropical rainforest.

Why is Brazilian Cuisine So Diverse?

Much like Cuban food, there are significant African influences in Brazilian cuisine resulting from the slave trade.

Later Brazilians recruited Europeans and Japanese immigrants to work in the coffee plantation.

There are now currently 1.6 million people of Japanese descent in Brazil, the largest population outside Japan.

This combined with the Amerindian population has created what we know as Brazilian food today.

As food in Brazil is incredibly region, it means you cannot find everything on this list in one region.

You must explore each region as the coast offers much different opportunities than inland Brazil.

Meat plays an important role in Brazilian cuisine. In fact, the rodizio restaurant is one of the cultural phenomena that Brazilians embrace and enjoy a variety of different meats.

But like vegetarian food in Peru, there are also a number of traditional Brazilian foods that just happen to be meatless. 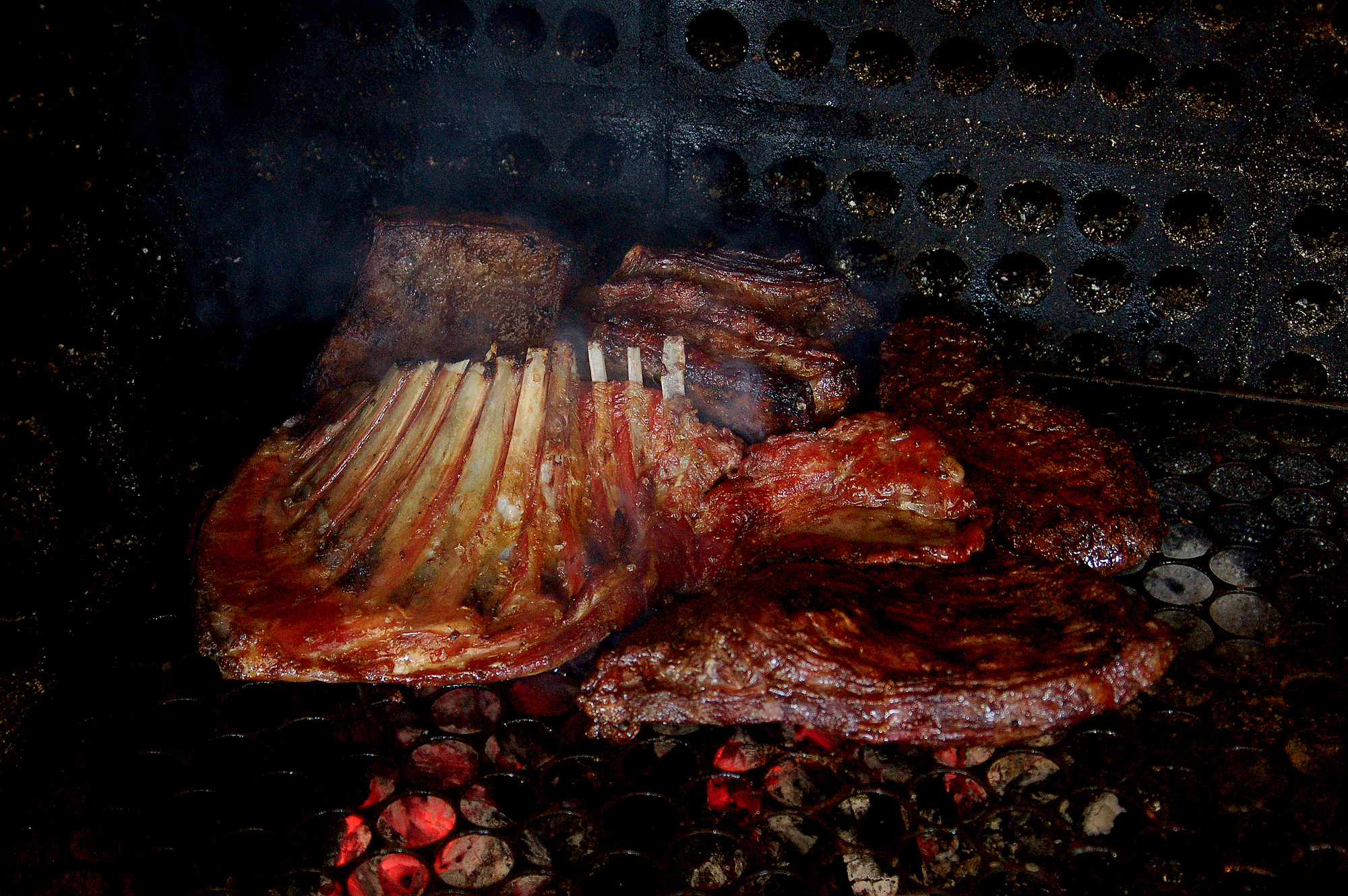 This is one of the iconic meals that you can enjoy in Brazil. Brazilian barbecue is usually a part of a family or group barbecue often on a Sunday.

It is most common in southern Brazil, in areas like Rio Grande.

If you don’t know people you can go to a Brazilian steakhouse, known as a churrascaria, where one meats are stretched across a metal grill, and then cooked over hot coals.

ALSO READ: How to Host an Argentinean Asado

There will usually be a selection of steaks and other cuts, along with sausages and black pudding, while others attending the asado will bring side dishes to go with the meat.

It’s common to serve meat dishes with a chimichurri sauce.

Often considered to be the national dish, this Brazilian food is a stew which is made with pork and black beans.

They are supplemented with tomatoes, cabbage and carrots that round out flavour. Together, they are cooked over a low heat for several hours to ensure the whole stew is tender and tasty.

These pastry pockets are found in many areas of Brazil. They are a Brazilian food served in the streets for little money but you can also find them in the market like in the video above.

Made with pockets of pastry that are either curved or rectangular similar to empanadas.

Stuffing can include cheese, ground beef and chicken, along with more unusual fillings such as heart of palm and guava jam.

I loved the shrimp and cheese pastel I ate in the video about the São Paulo Municipal Market.

Another popular street food in Brazilian cuisine is bolinho de bacalhau. It is especially common in the coastal areas around the south of Brazil.

Bolinho de bacalhau are small balls of white fish that are coated in batter and deep fried. They are usually served with a generous squeeze of lime juice.

Similar to the brigadeiros, these small sweets are little balls made with coconut instead of chocolate.

These are very typical Brazilian treats and popular at parties and other celebrations.

The pequi is a nut that is found in the north east of the country.

This Brazilian dish is served with chicken and rice, and the strong and rich flavour is one that can be a surprise to many people tasting the pequi for the first time. 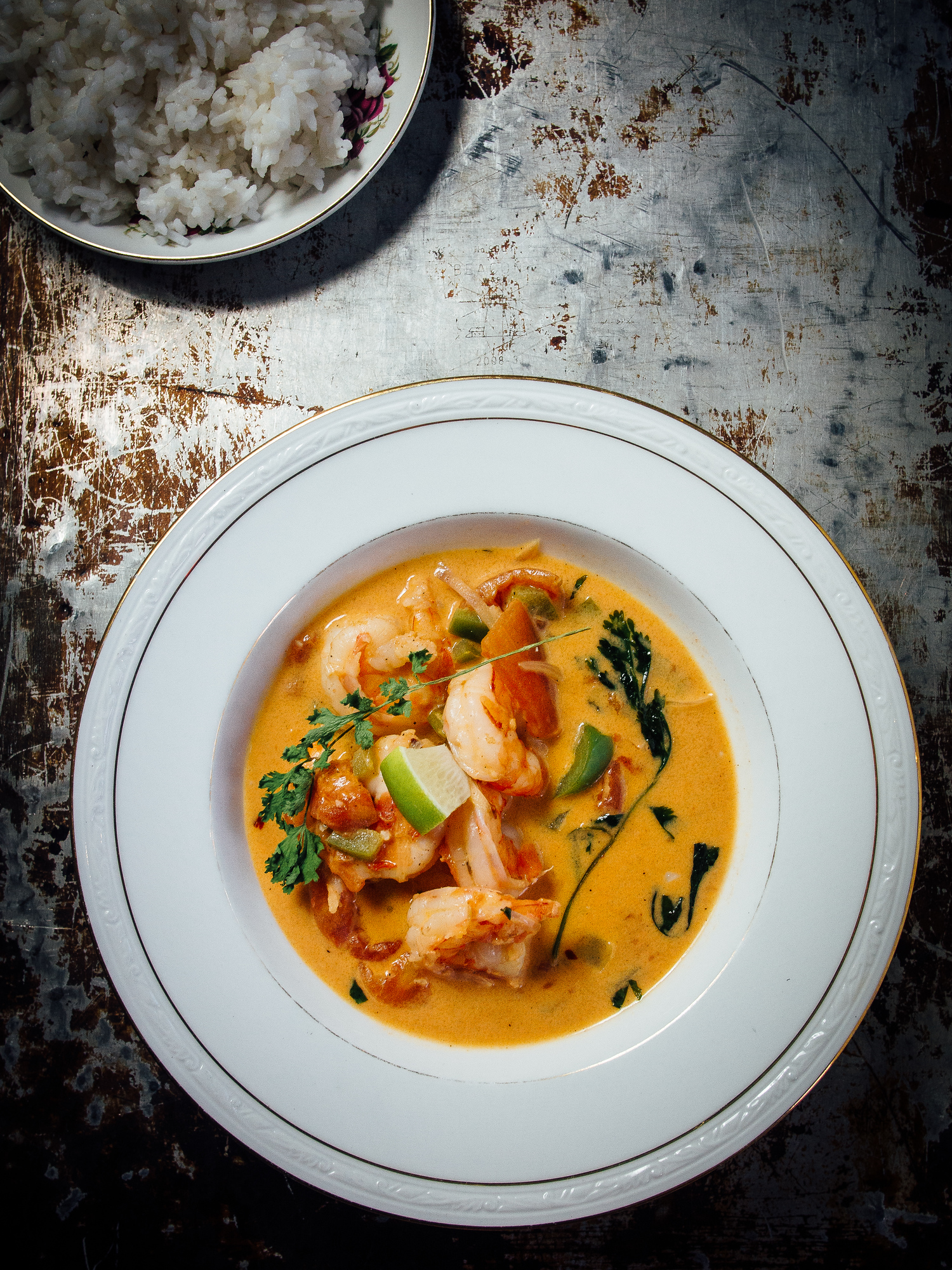 This fish stew is one that is usually found in coastal areas of Espirito Santo and Bahia.

It is made with salt water fish which is cooked in a sauce including coconut milk, tomatoes, onions and garlic. Some people use shrimp to make the stew.

Vatapa is a creamy paste that is commonly eaten with acaraje and rice, and it is prepared by mashing bread, shrimp, coconut milk, ground peanuts and palm oil together until it has a smooth texture.

At first it may seem that vatapa and moqueca are the same as in English the shrimp version is translated as Brazilian shrimp stew for both.

To make things more confusing they are both found in the same region, Salvador Bahia the north and northeast regions of Brazil.

But vatapa uses ground peanuts that are mashed into a paste, which you do not find in moqueca.

To make things even more confusing, bobó de camarão is a shrimp stew also found in the Bahio region.

However, it’s more often translated to chowder as it is made with manioc flour, which is from the cassava route. And so the texture is a bit different.

Bobó de camarão is a dish influenced so heavily from Africa, it’s actually the same dish to the West African dish Ipetê.

These cheesy little buns are usually eaten as a breakfast food in Brazil, and are made with cassava flour and garlic, while the cheese used in making the bread is usually Parmesan.

Many Brazilian desserts use coconut among the ingredients.

This white pudding combines the coconut with tapioca and sweetened condensed milk for a simple but wonderfully tasty dessert that is most often eaten during the winter.

This dish originated in the Amazon jungle. It is essentially boiled duck served with a tucupi sauce.

The sauce is extracted from the manioc root, which has to be boiled separately for several hours to make it edible.

One of the staple meals for those coming from the São Paulo area, this is a dish that includes a pork chop, sausage, cabbage and rice, along with fried bananas. 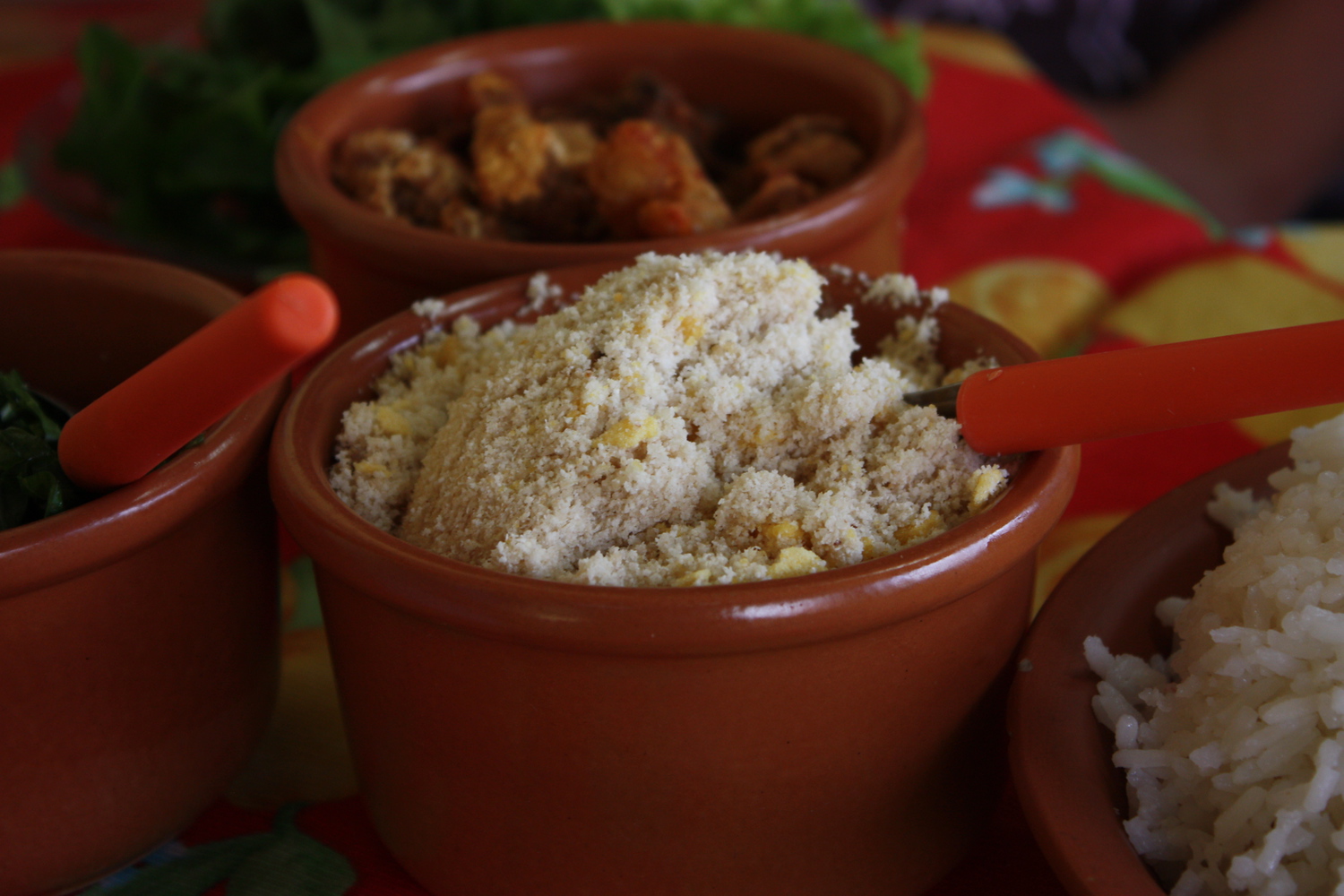 Famous for its distinctive smoky flavour, this cassava flour mixture is one that has been cooked with salt, smoked meat and spices.

It is most commonly eaten as a side dish or sprinkled over feijoada.

Prepared with beans, cassava flour and bacon, this simple dish is one that was commonly used to feed military troops, and uses eggs and the flour to bind the ingredients together after they have been fried.

I love to snack. It’s not just eating in between meals that I love, but the actual snacks.

I would far rather order a plate of appetizer than a main meal. And while so many people hate the small plate movement I adore it.

I have a fear of commitment. Not just with partners. Or places to live. Also with food.

How can I possibly commit to one entree when there is so much delicious food in Brazil.

And there are so many Brazilian snacks, I’d rather just grab a caipirinha and head to a bar and have snacks for dinner.

Here are some of my favourite Brazilian snacks.

My first thought with these small croquettes was that they reminded me of kibis, one of the antojitos in Playa del Carmen and similar to falafels, which are made with chickpeas or other beans.

Like Mexico, Brazil also had a history of immigration from Lebanon in the late 19th century. Quibe (pronounced kib-eh) are a sure sign of Lebanese influence on Brazilian cuisine.

It was no surprise that bulgur wheat is combined with ground beef and onions before heading to the deep fryer. Afterwards they are dipped in tahini sauce.

They are quite similar to the Lebanese snack, except the originals are made with ground lamb.

These teardrop shaped snacks are commonly eaten as a street food.

They are essentially chopped chicken that has been mashed with onions and seasoning and then covered in a doughy batter before being deep fried.

These small pastries sound like they would be similar to empanadas found across the continent.

MAKE IT AT HOME:
Empanadas Recipe

In Brazil they are a little smaller, and can be filled with chicken, pork or other meat and can also include heart of palm and cream cheese.

Many popular snacks that are influenced by the African culture in Brazil. Acaraje are made by peeling beans and then mashing them and forming them into a fist sized ball.

They are fried in palm oil, before being split open and stuffed with spicy pastes and sauces.

There are a number of possible toppings. This acaraje is a deep-fried ball stuffed with shrimp paste, cashew nuts, tomatoes and chili sauce.

This simple Brazilian snack reminds me of similar food on the coast in Canoa Ecuador called corviche where you would have a similar deep fried balls.

However unlike acaraje in Brazilian cuisine, corviche is made with plantain and filled with fish and pickled vegetables.

Brazilian cuisine is rich with lots of tropical fruits, an abundance of sugar and a population with a sweet tooth.

Forget cookies, when you go to someone’s home they offer much more decadent Brazilian sweets.

I always profess that I don’t like sweets but even I have a hard time saying no.

One of the favourite desserts of many Brazilians, but who wouldn’t love passion fruit? It is often simply a blend of sweetened condensed milk and passion fruit pulp.

It’s easy to make, just blend and then chill in the fridge.

However, like most Brazilian food it is so versatile there are many versions, even a vegan version that replaces the condensed milk with tofu.

Also a popular food in Panama, coconut squares that can be either light brown or the much darker varieties made with brown sugar.

Cocadas are traditionally gluten-free desserts and are very common treats, similar to having cookies in the house. Unlike cherry balls, they are available all year round.

They are made with condensed milk, coconut flakes, butter, vanilla and sugar. But cocadas are so versatile there are many variations of cocada flavours.

They are also one of the most popular Peruvian desserts.

Quindim is a simple but popular dessert that originated in the north east of the country.

However, it’s so popular you can find it across Brazil.

It is a baked custard dish made with sugar, egg yolks and ground coconut. You cannot miss its distinctive bright yellow colour.

Translated to brigadier these small sweets are made from condensed milk, cocoa and butter and covered with chocolate sprinkles.

Brigadeiros were first made in the 1940s.

Now you will find this Brazilian dessert at any celebration and they are one of the best Christmas cookies around the world.

But you must arrive as they are snatched up quickly.

Pin it For Later: Brazilian Food