While most people think of Nova Scotian food as being mostly fish and seafood, I grew up in an agricultural valley.

Other than apples and blueberries we don’t export much of our produce outside the Maritimes. But we have excellent produce in our backyard.

And so while people in cities are touting the virtues of buying local, that is simply the norm in Nova Scotia.

To drive from one town to another you pass by farmers markets and local shops that have the latest local produce in season.

We’re not on a trend, it’s simply how things are done.

And many restaurants don’t even bother to advertise they use local food suppliers because it is expected.

And so while I highly recommend eating seafood at the best restaurants in Nova Scotia I also don’t want people to miss our fresh local flavour.

When food is fresh, nothing beats it.

And that’s how I felt at Avondale Sky Winery. Lunch here made the biggest impression on me because it was simple food done exceptionally well.

They didn’t have Nova Scotia seafood chowder on the menu, but it’s one of my favourite restaurants anyway.

We started with fresh sourdough bread made daily at the winery. Then a dish of mozzarella made by the Venetian cheesemaker who lives in the area and country ham by Oulton’s Meats with a honey mustard drizzle.

And then this gorgeous grape and cherry tomato salad came out. It was so vibrant, fresh and simple but this is what eating local is all about.

I think sometimes restaurants feel like they have to turn food into something different. That to truly be an experience they need to manipulate it into something complicated.

But Chef Justin Floyd let the tomatoes speak for themselves and it was fantastic.

Avondale Sky Winery makes wine specifically for food. And with a glass of the 2015 Canadian Oak L’Acadie Blanc I was smitten.

I cannot bear food waste. Normally when I’m researching food in an area I eat half the food and take the rest to go.

When I can, I’m that person who brings their own Tupperware containers and tries to discreetly pack away half their meal.

On this trip I’ve also been dropping leftovers at my aunts house, because I know she loves great food too.

This was the only meal that I almost completed, save taking some of the country ham back home with me. 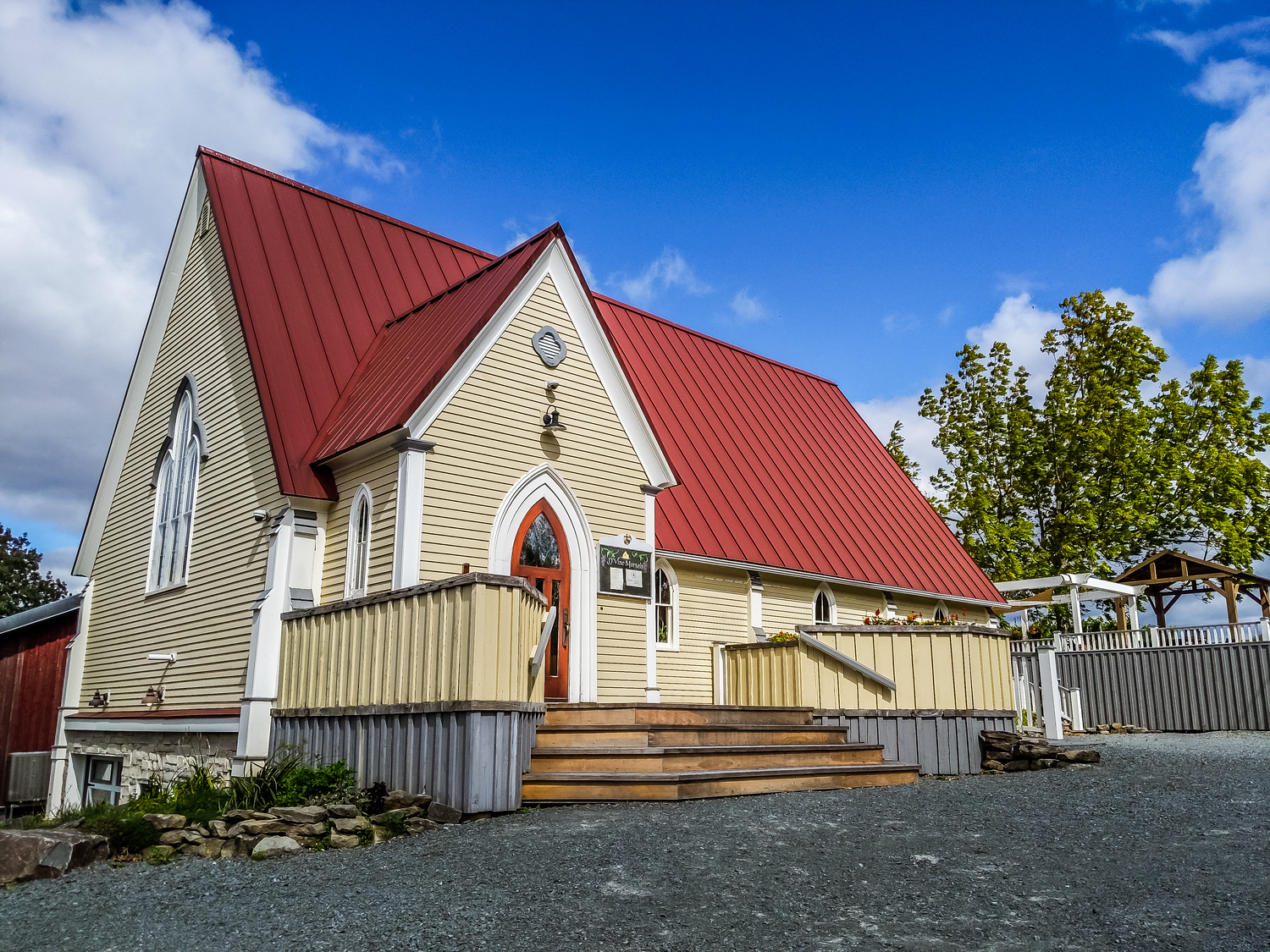 The Church That Walked on Water

This Nova Scotian winery is not in the main Wolfville/Gaspereau winery hub but it is well worth the drive. Many people come here just to see the building.

When locals heard there was a new winery being built, they offered up suggestions for churches that were no longer in use.

No one wants to see these beautiful buildings go used. It was a great fit as Avondale Sky incorporates a philosophy of sustainability and wanted to repurpose old buildings, rather than build new.

It chose St.Matthew’s church, which was built in 1837. Avondale Sky Winery saved it from destruction as they floated it down the river in order to restore it to be used as the winery.

Why You Shouldn’t Put Tomatoes in the Fridge

The most important part of this cherry tomato salad recipe is getting great tomatoes from a farm stand. And if you can don’t put them in the fridge.

If tomatoes are put in temperatures below 12C/54F they stop producing some of the attributes that make them taste so great – just as putting corn in the fridge makes it lose some of its sweetness.

You know those tasteless tomatoes we get at the grocery store – you can bet they were cooled at some point.

I only put them in the fridge if:

Buy the tomatoes fresh from a farmer or farmer’s market and make this salad immediately.

A Few Notes on this Tomato Salad Recipe

This is an incredibly versatile recipe. While this recipe uses cherry tomatoes and grape tomatoes you could use any local ripe tomatoes.

Get the tomatoes right and use a high-quality olive oil and good salt and you’re set.

I’ve mentioned before I really like this inexpensive grey Celtic sea salt in French pistou and Catalan tomato bread.

But if you’re IN Nova Scotia, you should try the Annapolis Salt harvested from the Bay of Fundy.

How to Make Crème Fraîche

Stir two cups heavy cream with 3 tablespoons of buttermilk and pour into a jar. Cover with cheese cloth and store at room temperature for 24 hours.

Crème fraîche is a soured cream with a high fat content and gives a tangy flavour to a dish. It’s not as sour as sour cream and has a more fullness of a cream flavour. I’ve included instructions on how to make creme fraîche. You can also buy it at specialty stores, albeit expensive.

Although it’s not the same, I think you could also substitute:

And if you just want to go for a caprese salad spin, tear up fresh mozzarella balls.

How to Roast Garlic in 25 Minutes

Take one head of garlic and coat in a neutral oil, like vegetable or sunflower. Wrap in aluminum foil. Bake in oven at 300F for about 25 minutes or until the garlic cloves are soft and spreadable.

This is SO easy. You cannot screw this up and once you make it you’ll want to make even more. I like to roast it for 40 minutes until it’s mush and spread on toast.

I once paid $17 for this at a restaurant until I realized how easy it was to do at home.

This dish is at its best in the heart of the summer while tomatoes are perfectly ripe and sweet like candy.

How to Make Crème Fraiche

Stir two cups heavy cream with 3 tablespoons of buttermilk and pour into a jar. Cover with cheese cloth and store at room temperature for 24 hours.

How to Roast Garlic

Take one head of garlic and coat in a neutral oil. Wrap in tinfoil and bake in oven at 300 for about 25 minutes or until the garlic cloves are soft and spreadable.

This recipe is so simple with few ingredients so they must be the highest quality.

Don't use grocery store olive oil on this salad. I've suggested a few that are easy to order and while they are more expensive, you only need a little.

This fresh cherry tomato salad is part of a paid partnership with Tourism Nova Scotia where I independently explore where I grew up to share what I think is the best food and wine in the Annapolis Valley. I am thrilled to work with him as it’s a dream job to promote my home. And big thanks to Avondale Sky Winery, who graciously hosted me for lunch and also gave me this cherry tomato salad recipe.