Before I met Rease in Costa Rican I had been in Playa del Carmen and with so much work to do I decided to go dry for three weeks to stay focused. But when I did finally meet up with her in Puerto Viejo I was armed with a list of tropical Costa Rican drinks I wanted to try.

It seems like this would be an easy task. It was not.

It seemed that the mojito had become the most popular drink in many bars. I guess that’s fine for some.

But the mojito was invented in Cuba, and I have had plenty of them the last year in Havana. I wanted a taste of Costa Rica.

But people did tell me that these drinks existed in Costa Rica, I was just unlikely to find them on this trip in Puerto Viejo.

For this reason I wanted to share my list of drinks in Costa Rica as maybe it will help someone else out. Because I’m not so sure I’ll come back.

But here’s a fun fact…

You drink and drive in Costa Rica!

Don’t get too excited because it IS illegal to drive if you’re drunk.

Like much of the Caribbean, alcohol isn’t reserved for special occasions and often something people have daily.

Perhaps that’s because it has always been affordable as sugar cane has been a common crop in Costa Rica.

So similarly to how rum is readily available in Cuba, the national alcohol, guaro is never difficult to find.

Personally I’m an all or nothing kind of person. If I know I need to drive I don’t even have a sip.

But you can have a drink and then drive, but if you’re stopped and deemed to be over the limit you’re in trouble.

The national drink of Costa Rica, the name is trademarked to be associated with Peru…similar to pisco in Peru.

It’s a clear sugar cane alcohol, basically the same as aguardiente in Colombia. It’s from the same family as rum, but isn’t as mature.

And if this reminds you of the most popular Brazilian drink cachaça, you’d be right!

It tastes similar to a young vodka.

Since 1851, there has only been one official producer of guaro. It is produced at the national factory, Fábrica Nacional de Licores.

Cacique guaro may seem tame because it’s only 30% alcohol. But it’s a bit dangerous because it’s quite smooth and the Costa Rican drinks also often contain refresco or fruit juice, which can mask it even more.

You can also drink it straight by sipping it from a shot glass. But this may not be the best way to try guaro the first time.

One of the more popular ways to drink guaro is as a guaro sour. Similar to a whisky sour, it’s a simple but strong cocktail recipe with two shots of water, lime juice, sugar and club soda.

HOW TO MAKE:
The Perfect Pisco Sour 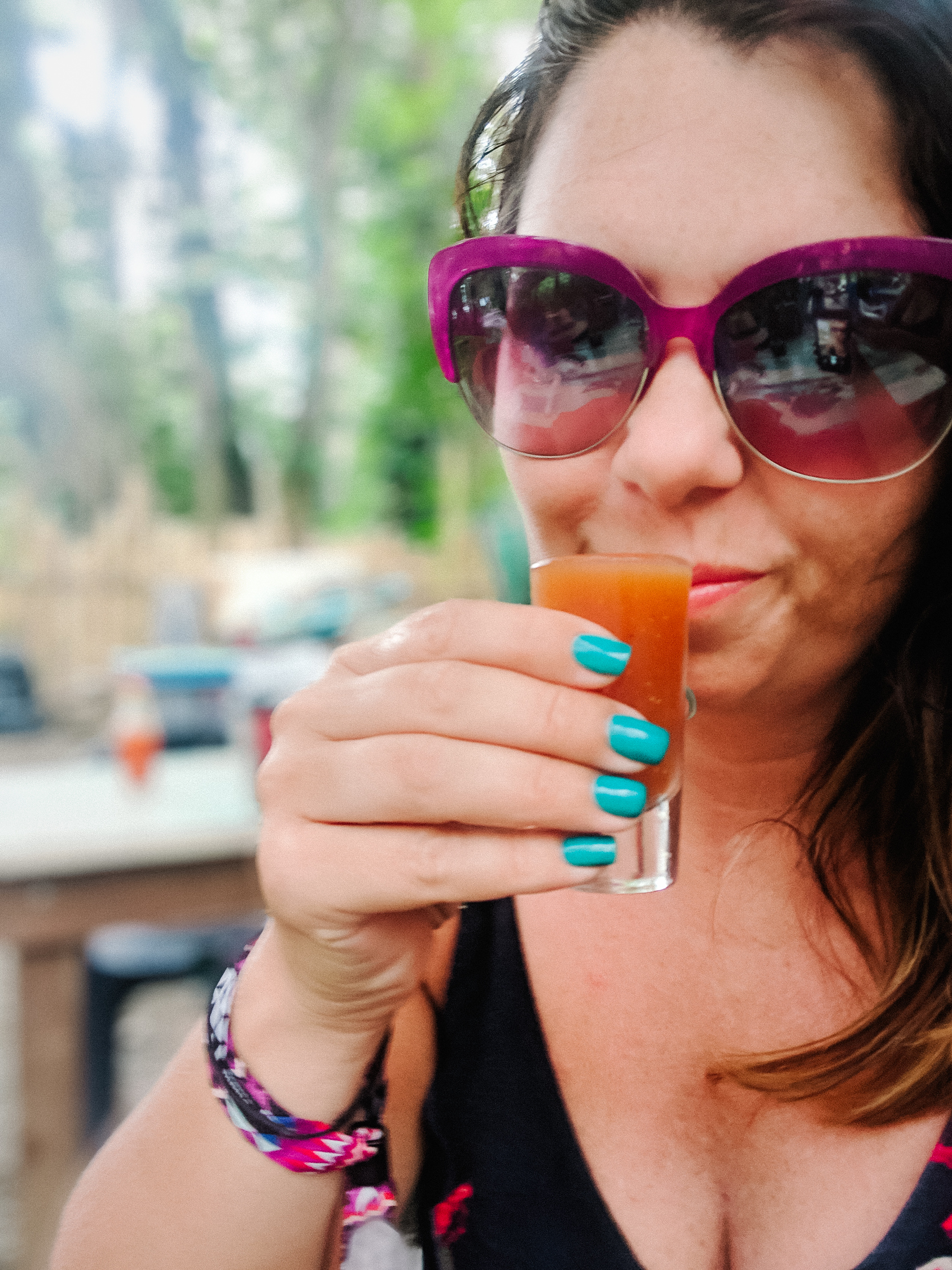 You can’t go far without seeing a chiliguaro shot. It’s one of the simplest Costa Rican drinks with only guaro, tomato juice, hot sauce and lime juice. It tastes a bit like a bloody mary or caesar drink.

Everyone has their thoughts on who makes the best chiliguaro, and there are also competitions. But wherever you go, it’s an inexpensive pick me up.

Many Costa Rican drinks are spins on classics and instead use guaro. The coloada fresca recipe is no different as it’s similar to a piña colada.

Instead of the cocktail using rum, it is made with guaro and spiced honey syrup along with coconut and pineapple. 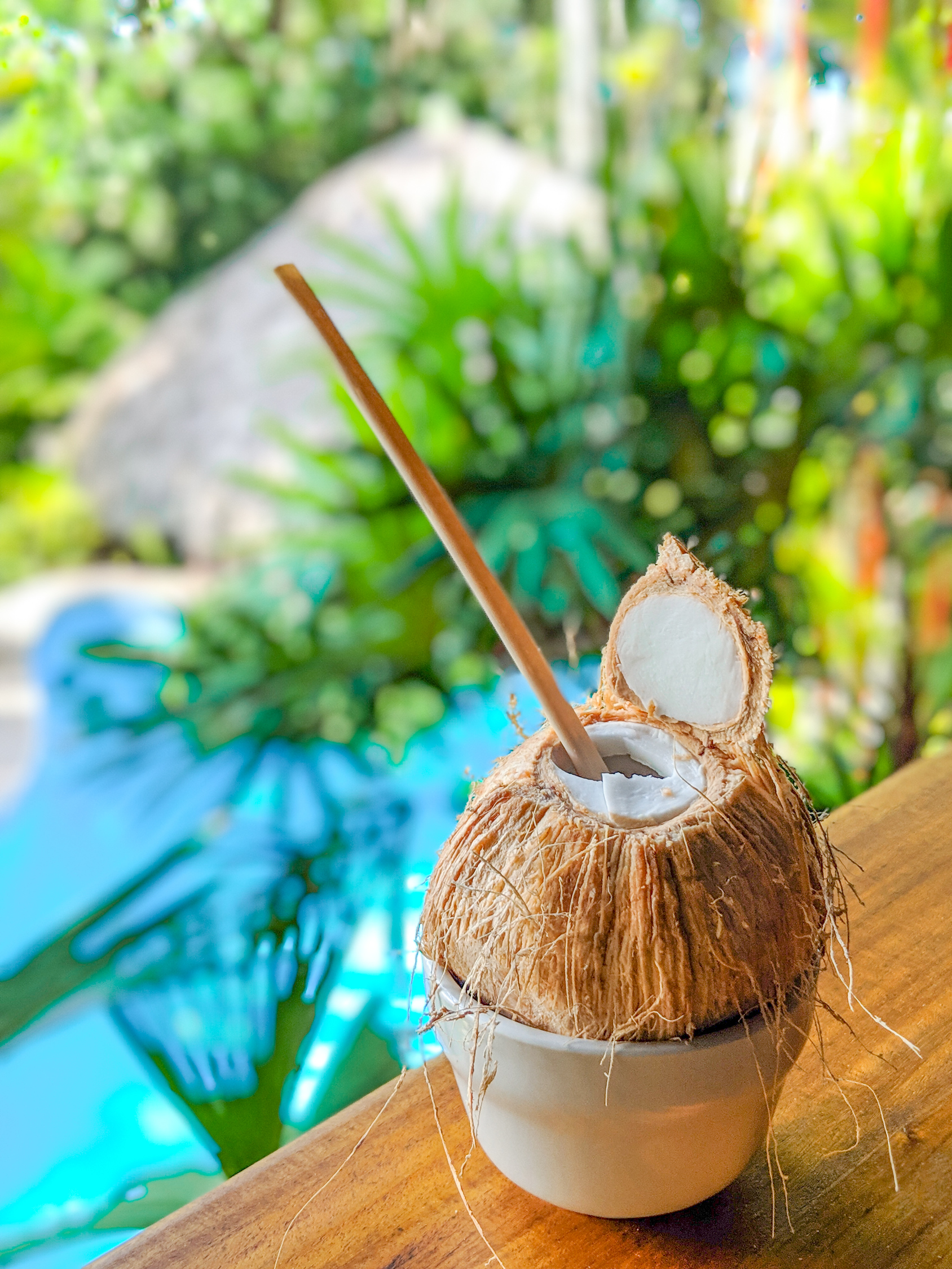 It’s very common as beach bars and may be served shaken or as a frozen blender cocktail.

Pura vida is the national philosophy of Costa Rica, While it translates directly to pure life, it’s kind of used like aloha – to greet someone hello, to say goodbye, or just send someone good thoughts.

This drink is similar to a rum punch in the Caribbean, the recipe is pretty loose and it’s also dangerous. In addition to guaro, orange and pineapple juice, it may include triple sec, grenadine or lime juice.

The common theme is deliciously fruity and strong! 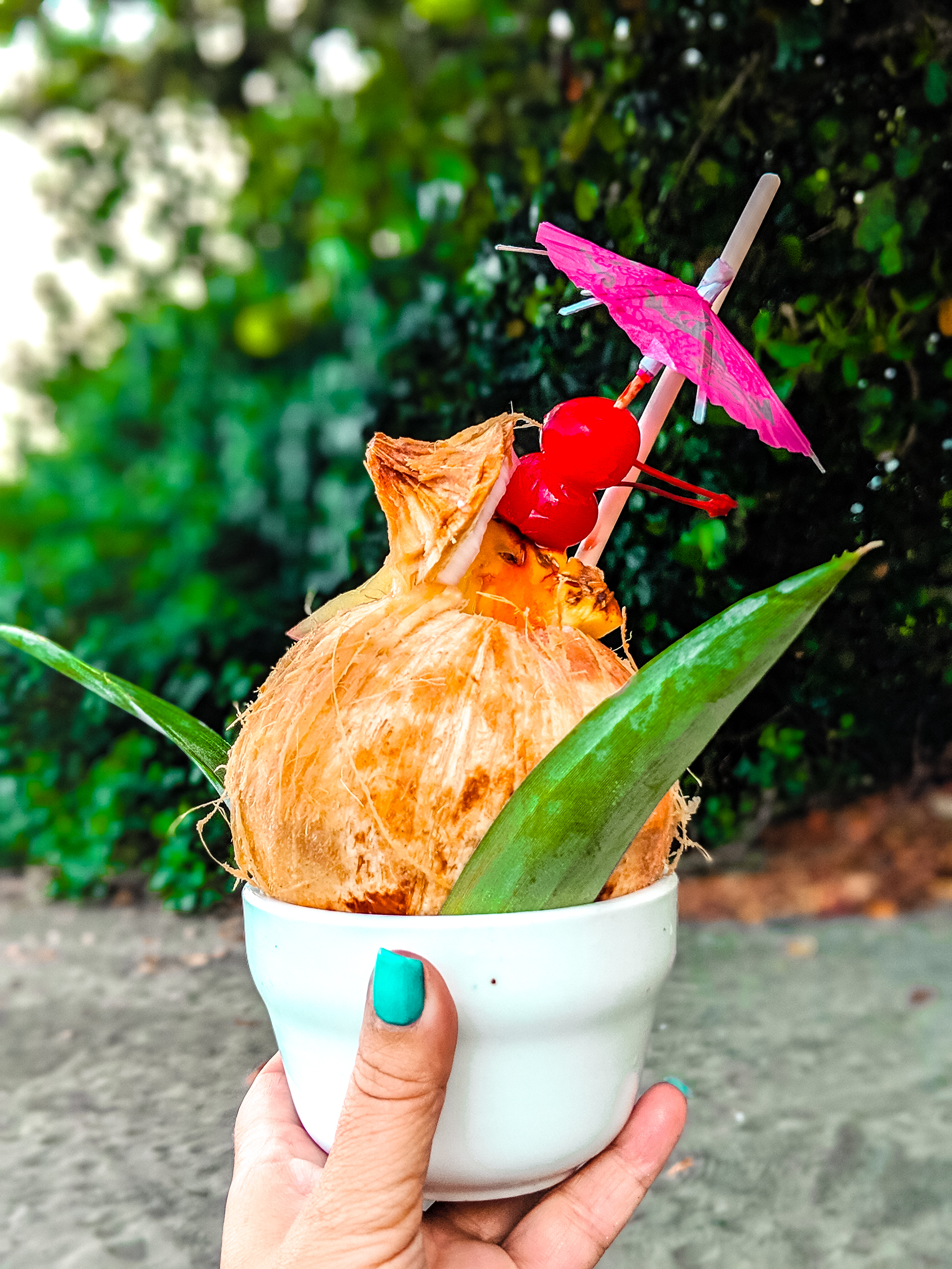 Costa Rica is not the only country to have a Coco Loco cocktail. The most famous is in Colombia, but that doesn’t mean it can’t be part of a Costa Rican drinks list too.

To make it you’ll need a sharp machete, as serving it in a green coconut is key. Mix guaro with the coconut milk, fruit juice and any other flavours.

The key difference between the Pura Vida cocktail and Coco Loco is the addition of coconut.

Costa Rican drinks are fantastic but did you know Costa Rica has such a thriving beer scene.

With such a large international population there are German-style national beers with typical generic lagers and ales that you see in the Americas.

But there are also dozens of Costa Rican craft breweries in the country. They are making fun and interesting beer.

It’s easy to find them as lots of restaurants, grocery stores and even convenience stores stock craft beer in Costa Rica.

Also known as chicha de coyol, I’m not so sure that it is really wine. This Costa Rican drink is more like moonshine and mostly found in rural areas of the country.

It is a spirit made from fermented sap of a coyal palm and while it originated in southern Mexico, but is most often associated with Costa Rica. 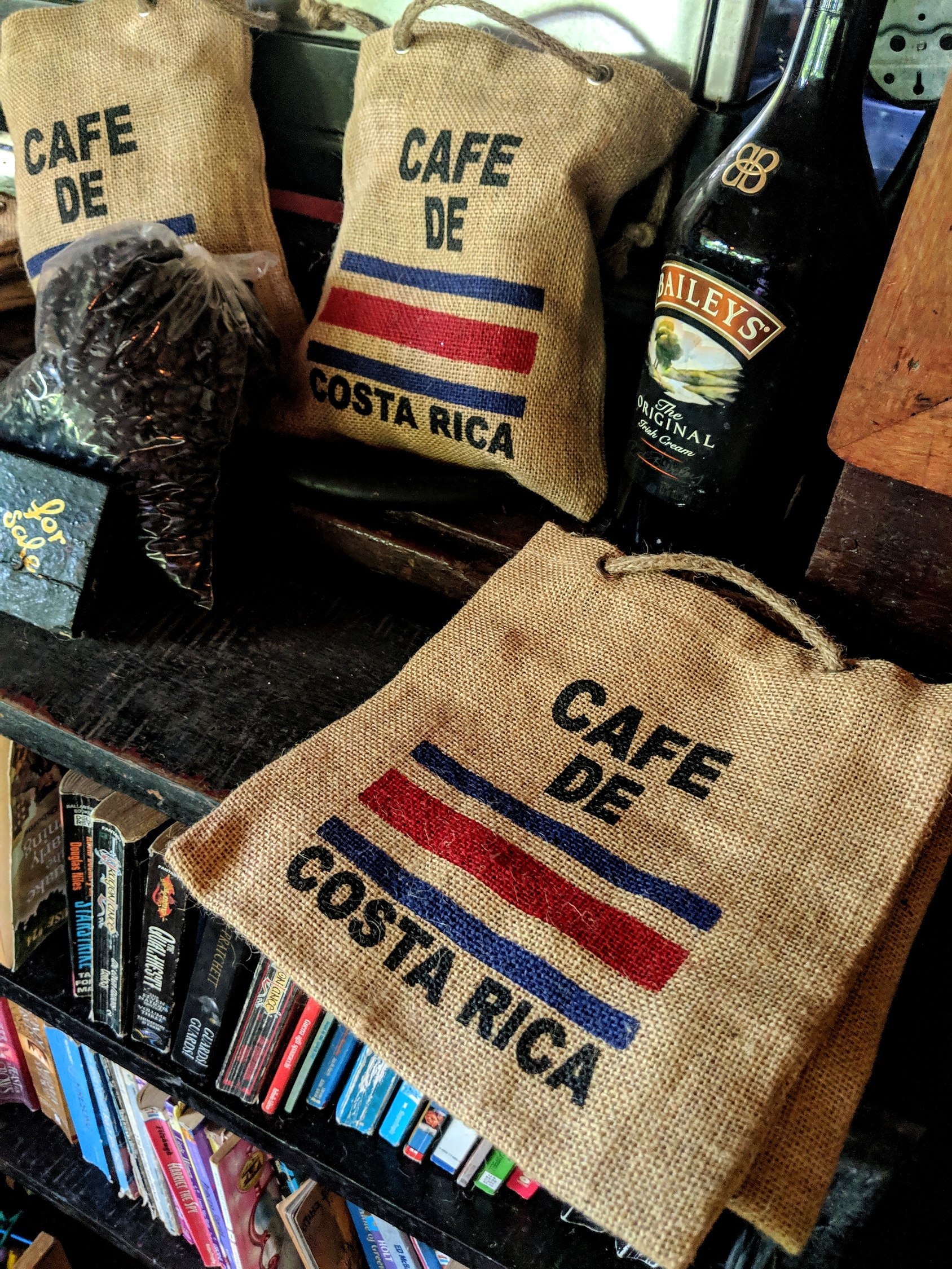 Okay so not all great Costa Rican drinks need to be boozy. Costa Rica is a tropical paradise and I don’t remember the last time I was somewhere so lush.

What the country lacks in authentic tourism, it makes up for in the number of incredible Costa Rican fruits and vegetables.

It could be paradise. It looks like paradise, that is for sure.

One of the traditional drinks in Mexico, and throughout Latin America is horchata. Although this is one of my favourite Costa Rican drinks, it’s also a bit unusual because it’s made with rice and sometimes cornmeal.

It is blended to a creamy texture and sweetened condensed milk and cinnamon are added. What that sounds strange it really is delicious.

Translating directly to sweet water, it’s not surprising that this is literally water that is sweetened with sugar cane juice.

It’s common in Central America amongst farm labourers as it’s a cheap drink made with easy ingredients to find.

The drink is needed for working out in the sun, and the sugar gives a quick energy boost.

One of the dirty secrets of coffee producing countries is that locals rarely get to drink the good stuff.

Premium coffee is almost always exported. Colombia is well known around the world for its stellar coffee, and yet instant coffee brand Nescafe is alarmingly prevalent there.

Side story: One of my favourite jokes is that they call Nescafe: no es cafe – or it’s not coffee.

Cuban coffee is also incredible. But the country (like Colombia) allows for local coffee to be diluted with a local legume called chicaro stretches the rations.

The truth is we have the privilege to drink the best coffee around the world, in the comfort of our home.

It is changing a bit for tourists as cafes are starting to cater to (and charge for) tourist demand. And Costa Rican coffee is fantastic.

It’s actually the only country, by presidential decree, to only grow one form of coffee. There are 70,000 coffee producers in Costa Rica growing in all seven distinct regions:

You can only find Arabica coffee grown in Costa Rica. The flavour is different than other countries as much of the land has a significant volcanic ash content. This gives Costa Rican coffee a unique taste.

Translating to fresh juice, one of the most common Costa Rican drinks is simply juice made from fresh juice. It’s common to see one of these exotic fruits:

ALSO READ:
How Many of these 27 Costa Rican Fruit Have You Tried?

There are several options when you dine at a soda (typical Costa Rican restaurant) and you even pick up a to-go juice from a street vendor.

Like many other places in Latin America, these juices are so cheap if you buy from a vendor it may be sold in a plastic baggie tied around a straw to drink from. 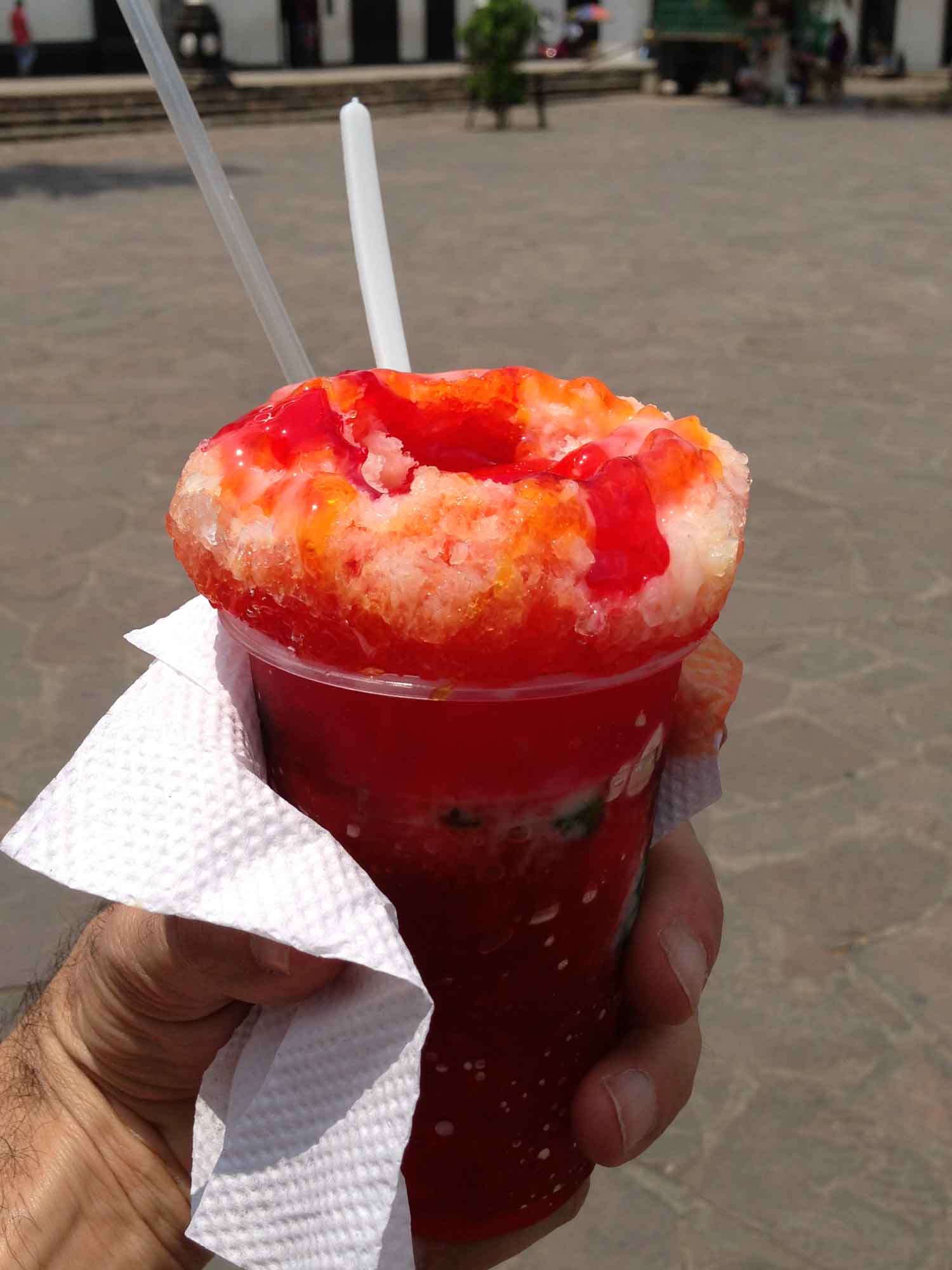 My favourite is frio frio in Dominican Republic, which just means cold.

At its base it’s a slushie, shaved ice topped with a flavoured syrup and sometimes sweetened condensed milk. The most popular is kola, which is a cherry flavour.

After coffee, one of the most popular hot drinks in Costa Rica is atoles. It’s a sweet drink thatis very common to have at breakfast or an afternoon snack. It’s even easier to make.

The basic recipe is heating milk with corn starch and cinnamon, but you can also get many other flavours such as pineapple, orange, or even corn.