A round-up of some of the best fiddlehead recipes from fantastic food bloggers.

Anyone who has known me for a long time, but still loves me, would say that I’m a bit…frugal. I’m not stingy with others. But I LOVE a good deal. I thrive on bargains.

And I think that was my initial attraction to foraging. There are so many edible spring plants in Canada that you can pick for FREE!

Well, if you know where to go and you make sure you’re not eating the poisonous ones. I never go without multiple books/field guides. When in doubt I pass.

Although I love traveling all over the world. And I would prefer to skip winter each year. I do love foraging in spring and autumn.

It’s my idea of an adventure, traipsing through the forest to collect things to eat.

While the Fiddlehead Capital of the World (yes this is a thing) is in Tide Head, New Brunswick, I’ve foraged fiddleheads as far west as Ontario.

They are very popular in Main, Vermont and New Hampshire.

If you have ostrich ferns (Matteuccia struthiopteris) in your forest then you have fiddlehead ferns in spring.

Fiddleheads are the uncurled frond of a fern. This is why the fiddlehead season is so unpredictable.

They are the fronds tightly wound and one day they unfold and turn into a frond.

They are found in areas with a lot of moisture, in forests and near river banks. Fiddlehead season short, three weeks at best.

While it’s usually in May, it really depends on how quickly spring comes. Sometimes it’s early and other times very late.

If you miss fiddlehead season it is possible to buy them frozen.

These fiddlehead fronds are really healthy:

In North America we mostly eat ostrich ferns (Matteuccia struthiopteris) when we talk about fiddleheads. They are called fiddleheads, because it looks like the end of a fiddle.

You can find fiddleheads all over the world known as:

They are a spring green vegetable. I think it’s somewhere it between spinach and asparagus. Others say broccoli, artichokes or green beans.

Are Fiddlehead Ferns Toxic? Can you Eat Fiddleheads Raw?

There’s a lot of debate about the toxicity and carcinogens with raw fiddleheads.

Both Health Canada and Centers for Disease Control and Prevention recommend cleaning and cooking fiddlehead ferns before eating – whether that be through steaming, blanching or boiling.

There are many kinds of local ferns. Both foxglove and bracken ferns are high risk and considered toxic or carcinogenic.

However, the kind of fern we eat is the ostrich fern fiddlehead.

Some hard core foragers insist they are fine raw and the most you’ll have is an upset stomach. But I’m not willing to take the risk.

Besides, spring plants have a raw bitter flavour before cooking. Who wants that?

How to Harvest Fiddleheads

Fiddleheads are a perennial plant. When harvested correctly they’ll return every year.

Remember to forage responsibly. That means leaving more of the plant than you take and leaving the crown.

If you harvest all of the fiddlehead shoots the plant cannot make energy that year and may not survive to the next. This is devastating as a health plant can live up to 20 years

Harvest no more than half the shoots from each crown. And you’ll have them to come back to each year.

When picking you want to be careful not to damage the crown.

Instead pinch off the shoots with your fingers about an inch above the crown.

Where to Buy Fiddleheads?

The farmer’s market is the best place to start. However, you’ll need to get there early as spring wild plants are the most popular.

If you don’t see them on a table just ask. Often times they keep the best stuff under the table or in a cooler.

How to Cook Fiddleheads

Fiddleheads sometimes have a brown paper husk, much like you’d see on tomatillos or spruce tips.

Remove the husk and soak in cold water. You’ll want to loosen the fiddleheads a bit to get out soil.  It’s best to change the water a few times to be safe.

Cooking fiddleheads is very easy. But you do need to know how long to cook fiddleheads.

Health Canada says to boil 15 minutes or steam for 10-12 minutes until tender but still crisp. If you boil them don’t keep the water as soup stock, it is VERY bitter.

Most fiddlehead recipes often start with a boil or steam to ensure there is little risk.

The most common way to cook fiddleheads is sautéed in butter. It’s a classic way to bring out the flavours of this wild plant.

However, I think it’s so popular because people don’t know others ways to eat fiddleheads.

If you look around the world, fiddleheads are:

I wanted to share these fiddlehead recipes to inspire people to use fiddleheads in more than just butter! 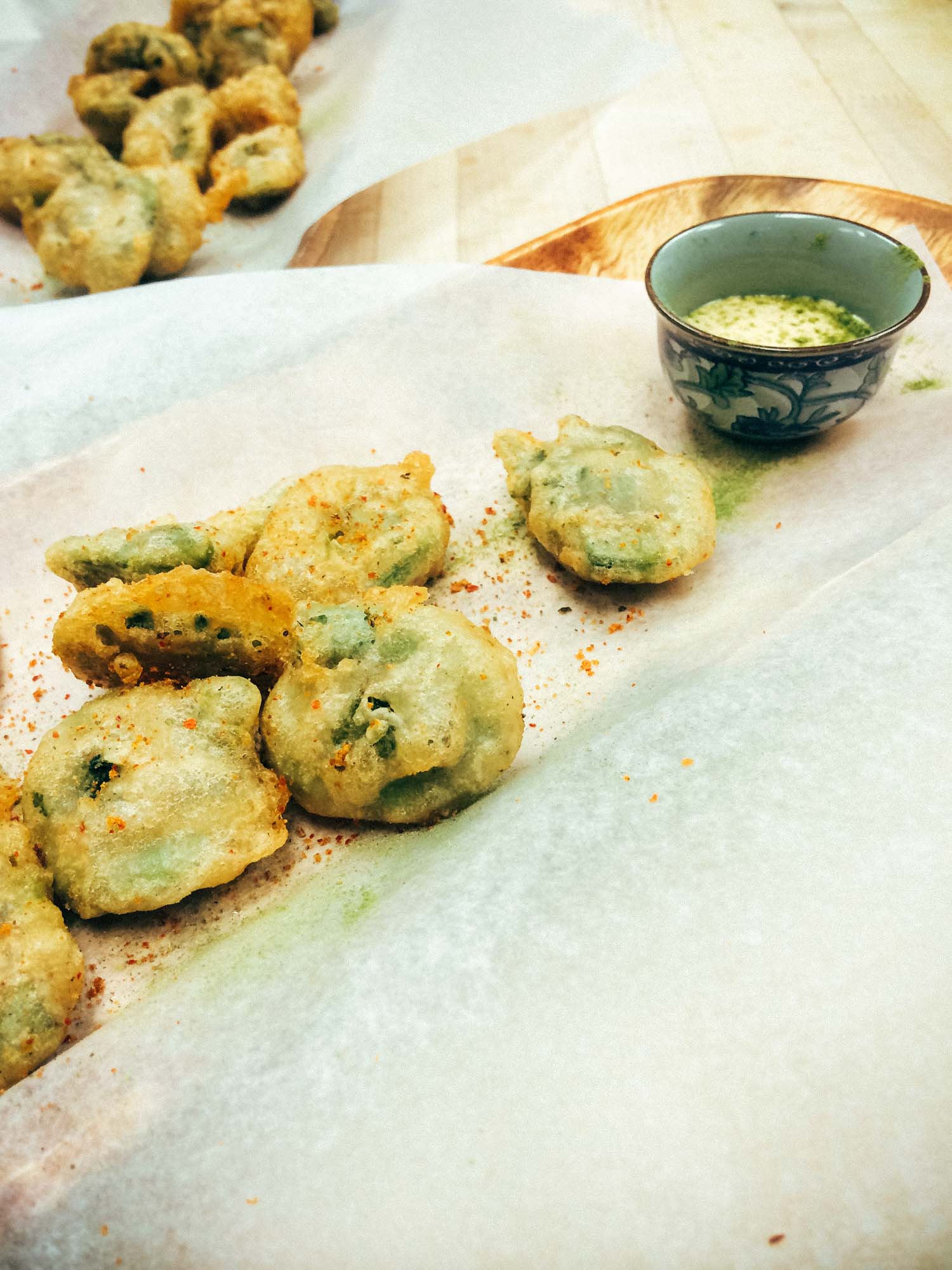 This is an old fiddleheads recipe I shot in a life that feels so long ago.

I served food at a pop-up restaurant in a dive bar and this was one of the recipes using fiddleheads.

The photos are horrible BUT this is an amazing dish.

Deep frying fiddleheads removes the bitterness and brings out an incredible creamy flavour.

The fermented undertones of kimchi just makes it a really interesting dish. If you don’t have homemade kimchi you could just substitute store bought.

With pre-made puffed pastry, this fiddlehead recipe is a breeze!

The creaminess of fontina and gruyere really compliments the complex flavour of fiddleheads.

I love the simplicity of a tart that you can make ahead and serve to guests.

If the idea of butter sauteed fiddleheads is a bit too simple for you this one adds lemon and garlic.

And frankly, who doesn’t think garlic makes food SO much better.

I love it when new vegetables appear for spring. It just changes how we eat!

This spring salad is good as a side or a meal with grilled chicken. It’s easy to make it vegan with tofu or other meatless protein. Best of all? It’s easy to prepare in under 30 minutes

Celebrate the start of the spring foraging season with this creamy fiddlehead soup with chives.

A perfect earthy flavoured soup for those cool spring evenings.

This pickled fiddleheads recipe is a delicious way to preserve the unique seasonal flavour of wild fiddlehead ferns and enjoy a healthy snack all year round.

They are a great alternative to cucumber pickles. Use them on a charcuterie table, in sandwiches, devilled eggs or in cocktails like the Canadian caesar drink or American bloody mary. 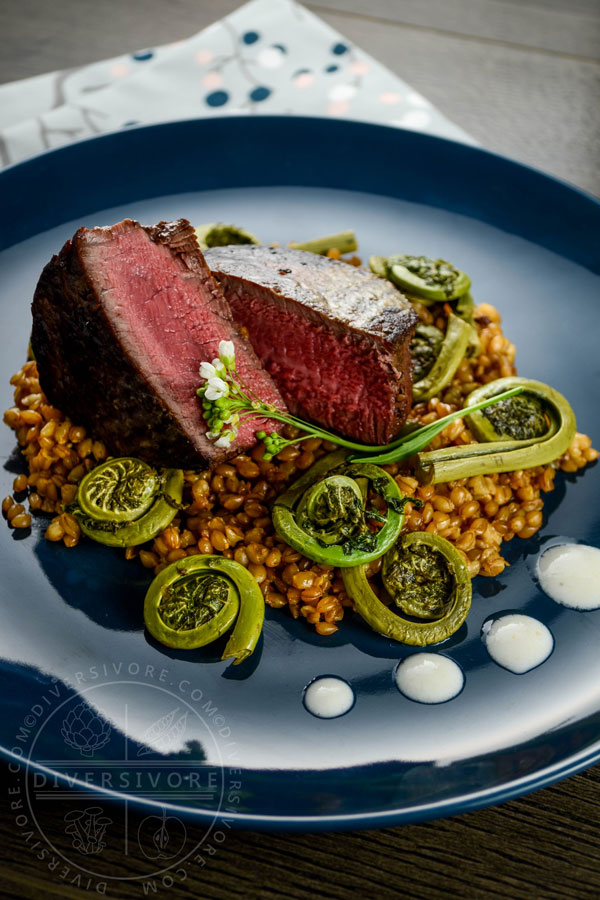 One of the more decadent fiddlehead recipes, while it does require a bit of preparation it is absolutely worth it.

In this recipe the fiddleheads are finished in butter and make for a special meal.

A great vegetarian fiddlehead recipe that is perfect for brunch, lunch and spring picnics.

It’s a wonderful dish to make ahead and serve when guests arrive.

Quiche is delicious warm but also great served at room temperature with a side salad.

This light and easy to assemble fiddlehead pasta recipe perfect for a quick lunch or supper.

It uses what you already have in your fridge and pantry so once you have fiddleheads you’re set to go!

Another great but simple way to serve fiddleheads is to use prepared phyllo dough. It gives it a light, flakey texture with the added rich flavour of gruyere cheese.

Shrimp and Grits with Fiddleheads

I love the north meets south aspect of this recipe. Southern shrimp and grits are a classic, and the creaminess of the grits goes so well with fiddleheads.

It has all the bright flavours of Italian shrimp scampi for a delicious spring recipe.

Lemon-Garlic Shrimp and Grits with Fiddleheads

This is an easy fiddleheads recipe perfect for those new to the ingredient.

If you’re going to try fiddleheads for the first time it’s best to get fantastic butter and start with one of the classic dishes. 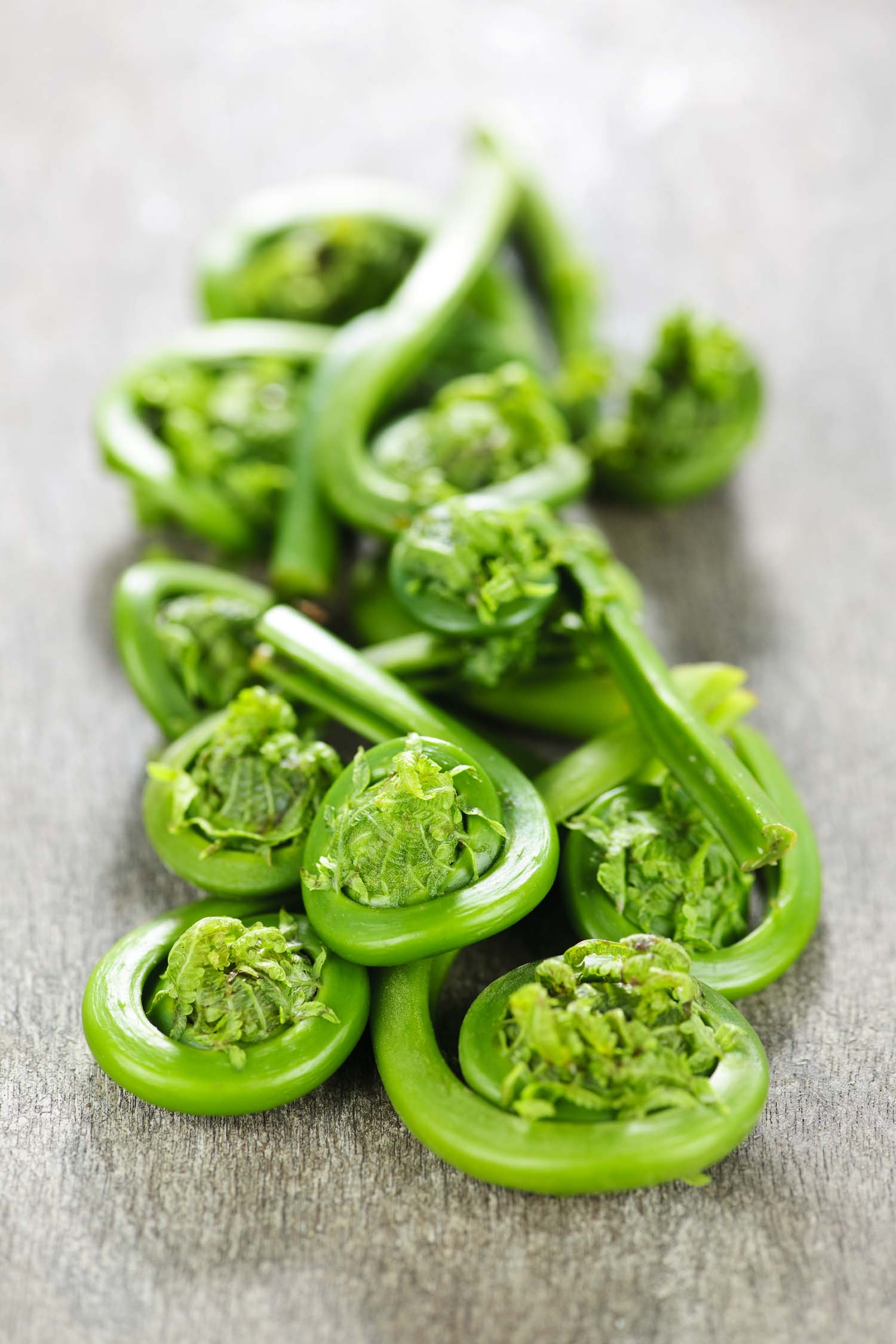 What Wine Pairs with Fiddleheads?

Green vegetables are notoriously difficult to pair with wine. Spinach, asparagus and many other greens leave a lot of people feeling stumped.

But young, bright flavours don’t need to be difficult. An easy cheat in wine is to pair food with similar characteristics.

So if you have a young bright flavour look for a wine that is similar.

Young rieslings pair well with spring vegetables. As do light rosés. I also love a good sauvignon blanc that has more grassy flavours, like those from Chile.

When in doubt. Buy a wine you love and forget about the obnoxious stress of having to pair with food.

What fiddlehead recipes are your favourite? Let me know in the comments below!