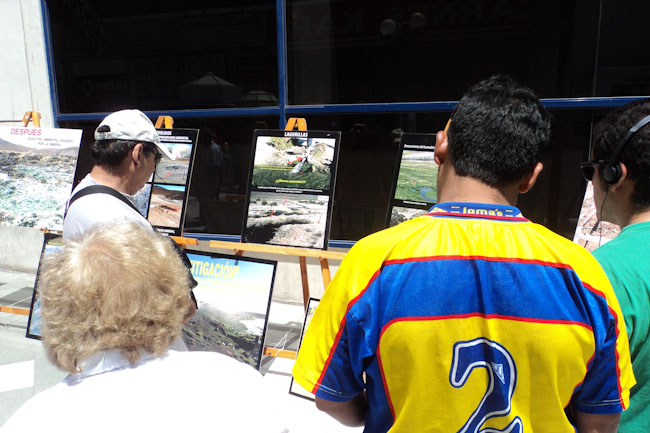 I say I’m Canadian with pride, never needing to apologize for my government or feel the urge to defend my people. I wear a flag on my backpack and I’m always warmly welcomed, hostel owners whisper that we’re always clean and polite and other backpackers say we’re friendly.

I’ve been to Vietnam, I cannot imagine what it feels like to be American visiting the country. And while the Vietnamese don’t appear to have hostility I have certainly seen it in Latin America. It can be tough to be American.

I’m not saying Canadians are perfect. I’m saying no one knows about our dirty laundry.

I arrived in Arica, Chile and was enjoying the day meandering around the city. I stopped at a display that a large group was reading from an environmental group about how mining was destroying the land around a protected UNESCO area. The photos depicted the region before and after the mining. The land was destroyed and the landscape was drying up.

But not as horrified as when I looked a bit closer and read that the mining company is Canadian. A man came over to talk to me and asked where I was from.

There are over 30 Canadian companies in Chile but the worst offender is Barrick Gold, the largest mining company in the world with an equally long record of environmental and human rights abuses including the forced relocation of indigenous villages, violence against union organizers, and environmental devastation.

It’s bad enough we’re ruining our own country with the Tar Ponds in Nova Scotia and the Oil Sands in Alberta but we’re also destroying others.

Environmental activists report Barrick’s explorations have led to the degradation of the glaciers near Barrick’s Pascua-Lama project. In 2005, the water authority in Chile issued a report a loss of 50 to 75 per cent of the glaciers in the area.

Despite protests in Chile and in Canada the Chilean government continues to allow the abuse.

The Chilean economy is strong, better than many countries in Europe. It’s used as a model for other South American countries.

But I’m starting to see the price of a strong economy.