In many countries Three Kings Day celebrates the coming of the Three Wise Men. Here in Cuenca Ecuador they recognize the holiday but have created an event that has nothing to do with it.

Today is a little bit like April Fools mixed with Halloween with a touch of carnaval.

It starts off as a normal day but once night falls people dress up, pull pranks, all with the intention of amusement. The centerpiece of it all is the night parade.

University faculties compete with themes to make you laugh, often with parodies of the recent year. Such as: Michael Jackson being ressurrected in Ecuador.

Private universities spent hours on elaborate entries and the most impressive was a humorous look at music with massive comedic tribute of popular music: 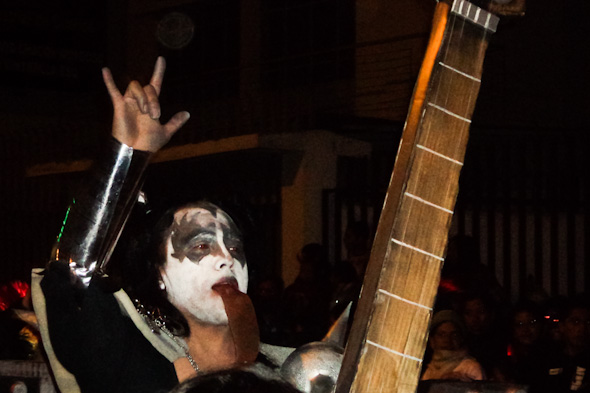 I love how some people don’t know a lick of English but can sing You shook me
all night long. 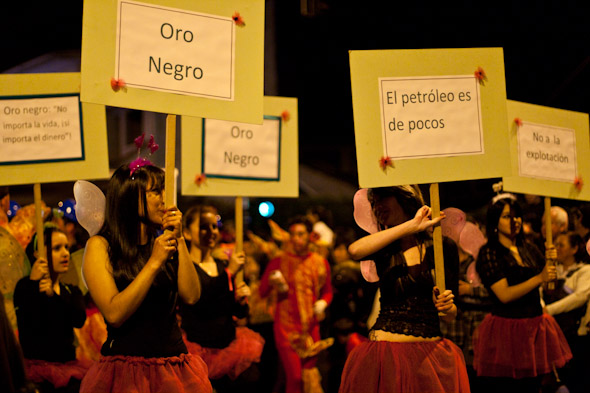 One entry that stood out didn’t make many people laugh the most but showed the danger of drilling for oil in the rainforest.

Unfortunately Ecuador depends on foreign countries to drill for oil and they had one of the world’s worst environmental disasters as it spilled oil, destroying wildlife and refused to clean it up.

If you haven’t seen the Yes Man campaign here’s the short and dirty version of it: Texaco is back, under a new name, and it wants to drill in Yusuni, a very special part of the rainforest where many of the species haven’t even been documented.

How can Ecuadorians trust a company that already created such a gigantic disaster it’s being called
The Rainforest Chernobyl. But this is on top of the minds of students, depicted by a bat with the well earned sign gringos chupa petroleo or petroleum sucking gringos.

It made me think about how we always want more money and think it will make our lives better, but what are we really jeopardizing?

What are we doing to poorer counties, tempting them with money, asking them to do things that are not in their best interest.

Even if the systems that are supposed to protect these countries don’t and Chevron/Texaco gets away with sabotaging the trial. It’s heartening to see a movement to stop the destruction.

They don’t have a lot but they know some things are more important than oil money.

It’s a lesson that rich countries should learn.