Without a doubt many will think it’s odd that a site called Bacon is Magic is writing about Passover food.

I’m not Jewish but I’ve always had such an appreciation for food during the Jewish holidays.

The symbolism and meaning behind Jewish celebration food is so interesting. I didn’t get that growing up as a Catholic although we did often eat fish on Fridays.

We had nothing like Passover so I like to learn for that one day I may get invited to a Passover dinner.

This is a list of all the things I’d like to try when one of my friends finally gets the hint and invites me over for a Seder dinner. 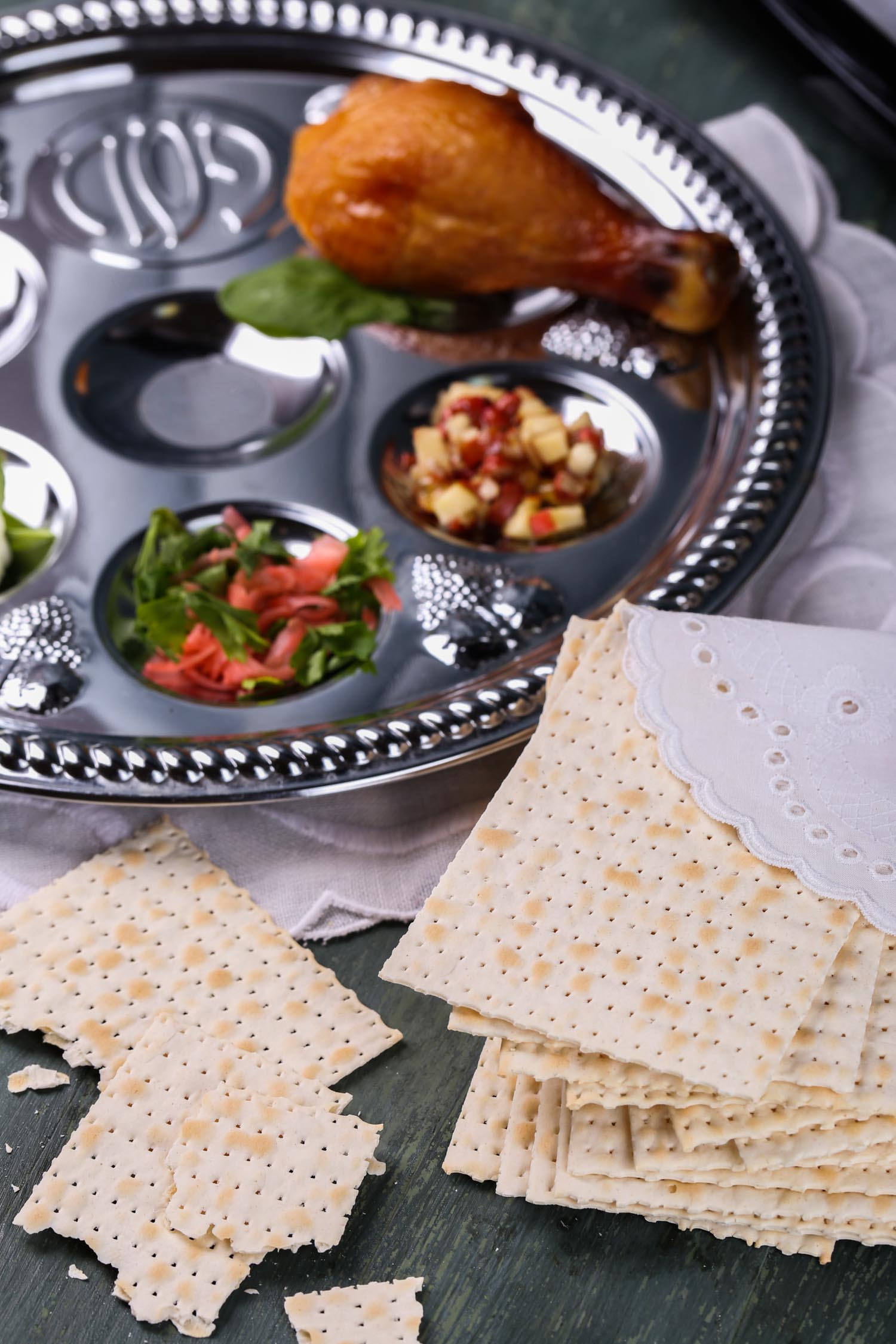 Passover remembers the Israelite’s exodus from Egypt, recognizing the hardships of slavery and celebrating the liberation.

Passover is celebrated for seven days in Israel and eight days in the Diaspora. The first night of Passover begins with a special Seder dinner. It celebrates and shares the story of the exodus using the Haggadah Jewish text.

Words from the Haggadah, prayers and food are all important elements to the Passover Seder dinner.

The story isn’t just told, it is also experienced through food. 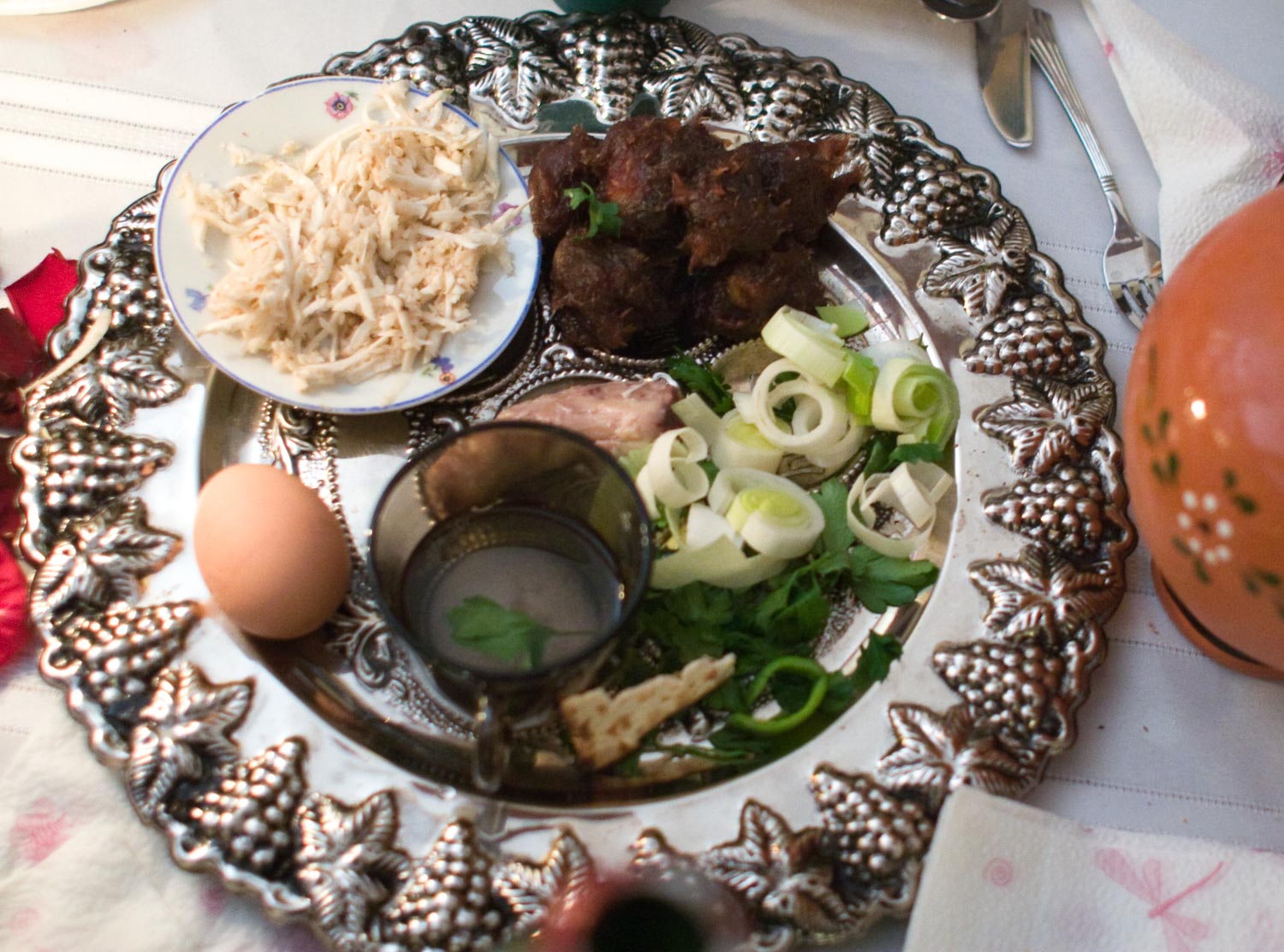 The Seder plate is the focal point during the first two evenings of Passover.

There are six traditional foods that appear on the plate. Each item represents something and has symbolic meaning.

Sedar plates vary by household. Some homes will have a fine china Seder plate that has passed down generations, with indented spots and labels for each of the ritual foods.

Others may use a paper plate that their children have decorated.

This is a great video that explains the Passover food on a Seder plate.

Known as beitzah, it is a roasted egg that symbolizes rebirth and renewal. In ancient Jerusalem it was brought to the Holy Temple as an offering known as chagigah.

It is also acceptable to use a hard boiled egg. It is dipped in saltwater and eaten during the Seder dinner.

This Passover food is known as the Zeroa, it is a lamb’s shank bone that symbolizes the lamb sacrificed the eve of the Exodus and also refers to the passage where God says “I will redeem you with an outstretched arm (zeroa).”

It is not eaten as part of dinner, and often saved for the Seder dinner the following night. 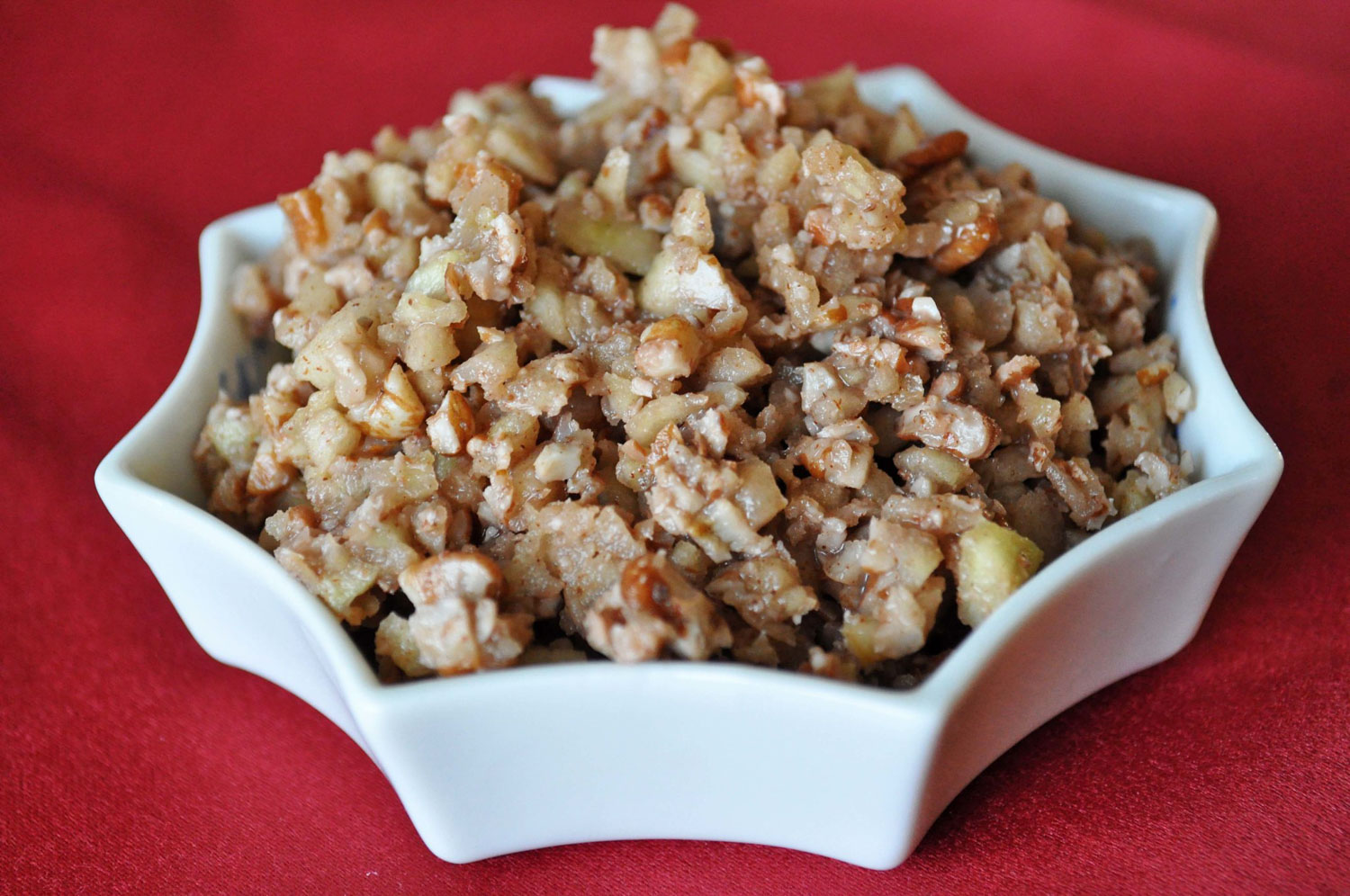 A fruit paste that symbolizes the mortar the Jewish slaves used to build the pyramids in Egypt for the Pharaoh.

Charoset recipes vary but it is a mix of dried fruit, nuts, wine along with cinnamon and other spices.

A non-bitter green that references the difficult work of the slaves. It is often parsley or celery and is dipped in salt water to symbolize tears of the Israelites.

A non-bitter vegetable, here parsley, is dipped in salted water to symbolize tears.

It is eaten after the kiddush blessing over the wine. Maror is a Passover food is a bitter herb, most often horseradish, that represents the bitterness of slavery from ancestors.

Depending on availability it could be a piece of fresh horseradish or a spoonful of it. Some homes also include a chazeret or a second bitter herb, which is usually romaine lettuce roots or endive.

During the Seder dinner the maror, chazeret and charoset are placed between two pieces of the bottom matzoh to make a Hillel sandwich as part of the Passover service. 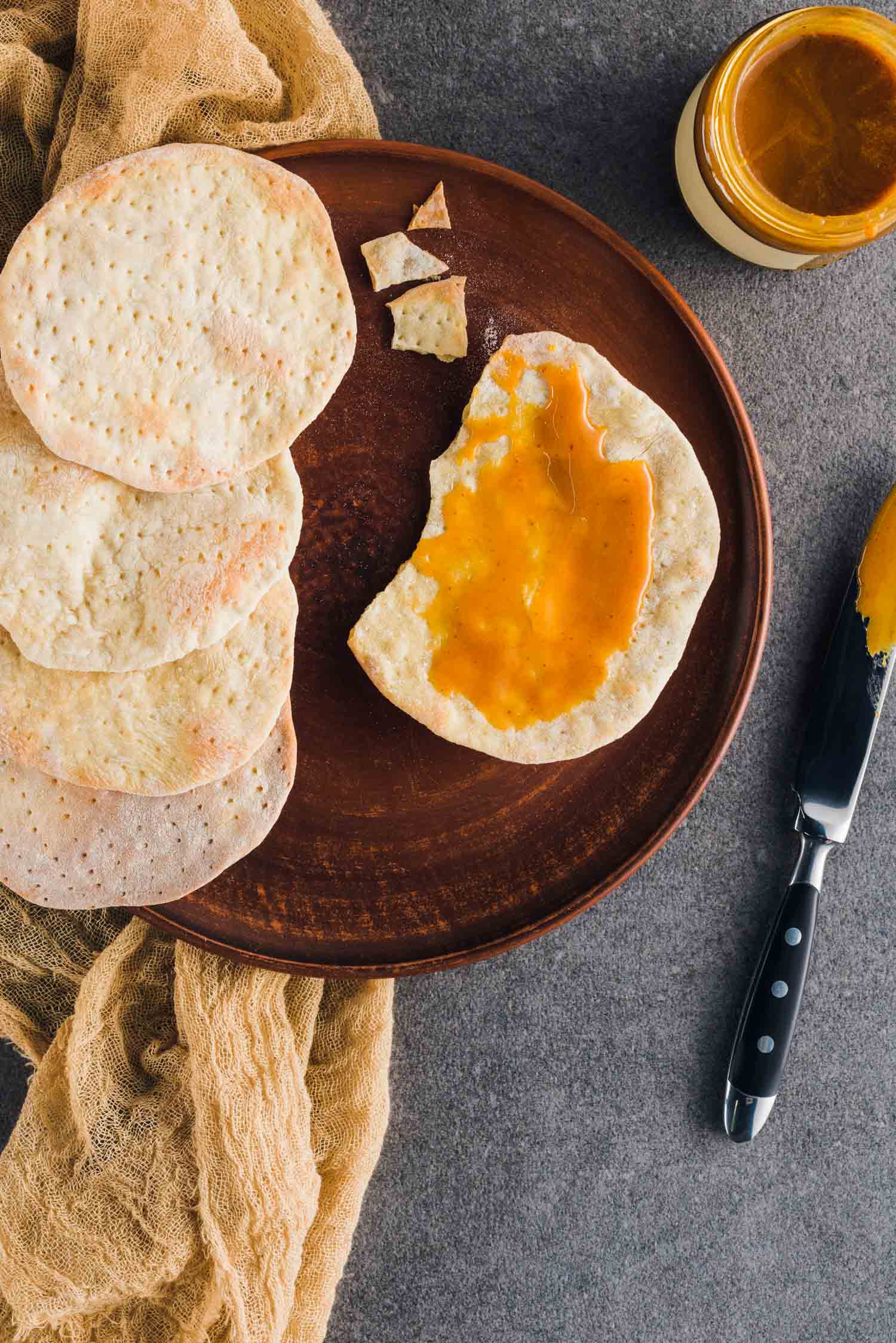 A traditional unleavened flatbread, matzoh (also sometimes spelled matzo or matzah) is common as it represents the unleavened bread eaten while fleeing Egypt.

Israelites needed to leave so quickly, they didn’t even have time for dough to rise.

It is either eaten as a flat cracker or used to replace breadcrumbs. Matzoh meal is often used in recipes to replace wheat, oats, spelt or any other bread known as chometz that would require rising and are therefore not permitted.

Although it is a very important Passover food, it does not belong on the Seder plate. Yet it does have a prominent place at the table and specific traditions during dinner.

Three matzohs are wrapped in cloth on a plate to represent the three tribes of the Jewish people – Kohen, Levi, and Yisrael. Two of these are broken and eaten during Seder and one, called the Afikomen, is hidden for children to find. The Seder is a very traditional meal with the Seder plate and other symbolic customs. However, Passover food on following evenings can be a bit more creative, provided it remains Kosher

Meals often begin with a soup, either an egg drop soup or a matzo ball soup, in a chicken soup broth.  Every recipe will be different, some matzo balls are light and airy whereas others may be quite dense. 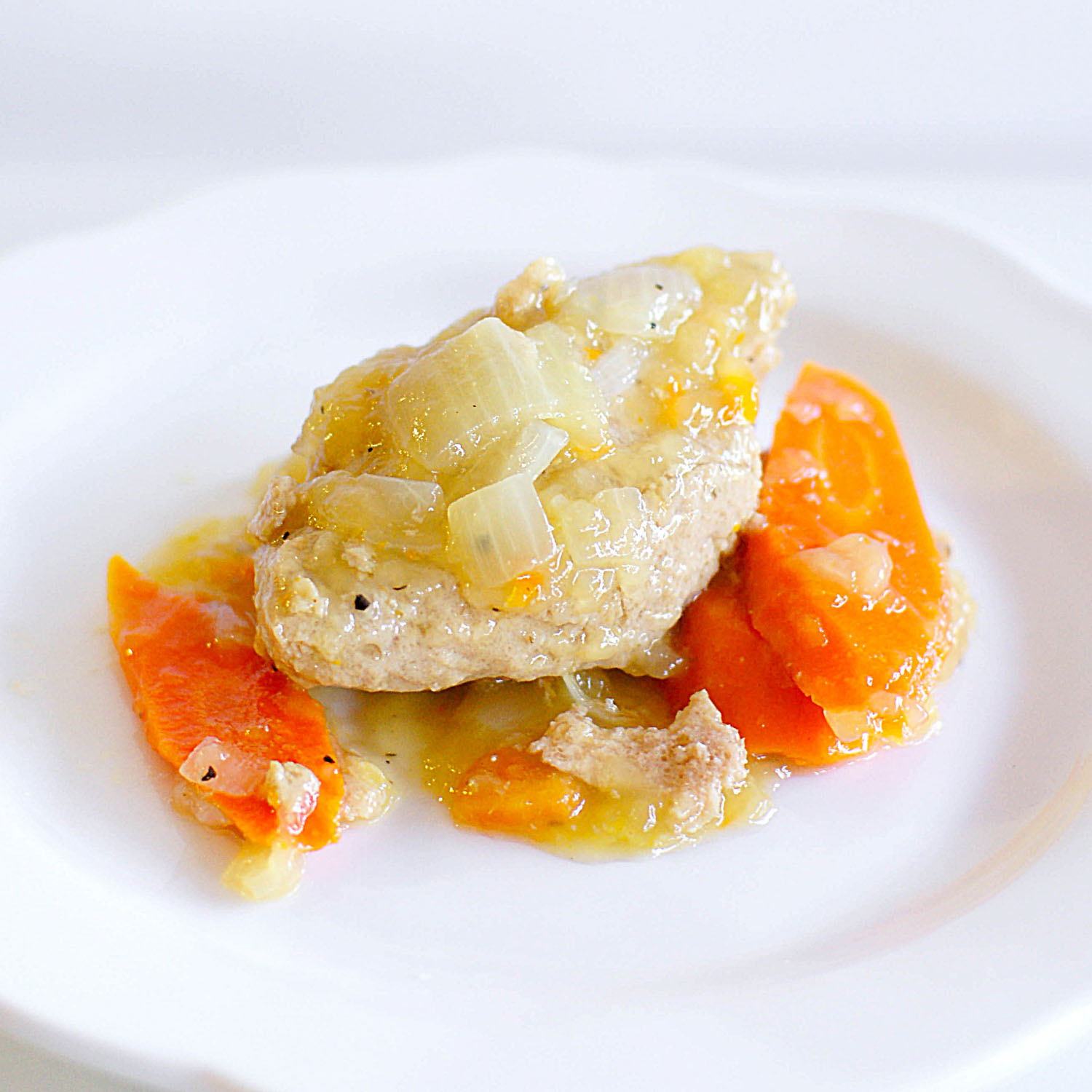 Poached fish dumplings that are often the second course of a Passover Seder dinner after the soup. It’s also a very common Rosh Hashanah food.

Sometimes called a fish meatloaf, gefilte fish is a blend of minced white fleshed fish, matzoh meal, with onion, spices and herbs. They are made into little oblong dumplings and poached.

Depending on the host, this Passover food can be sweet or savoury as the recipe varies and is historically regional. 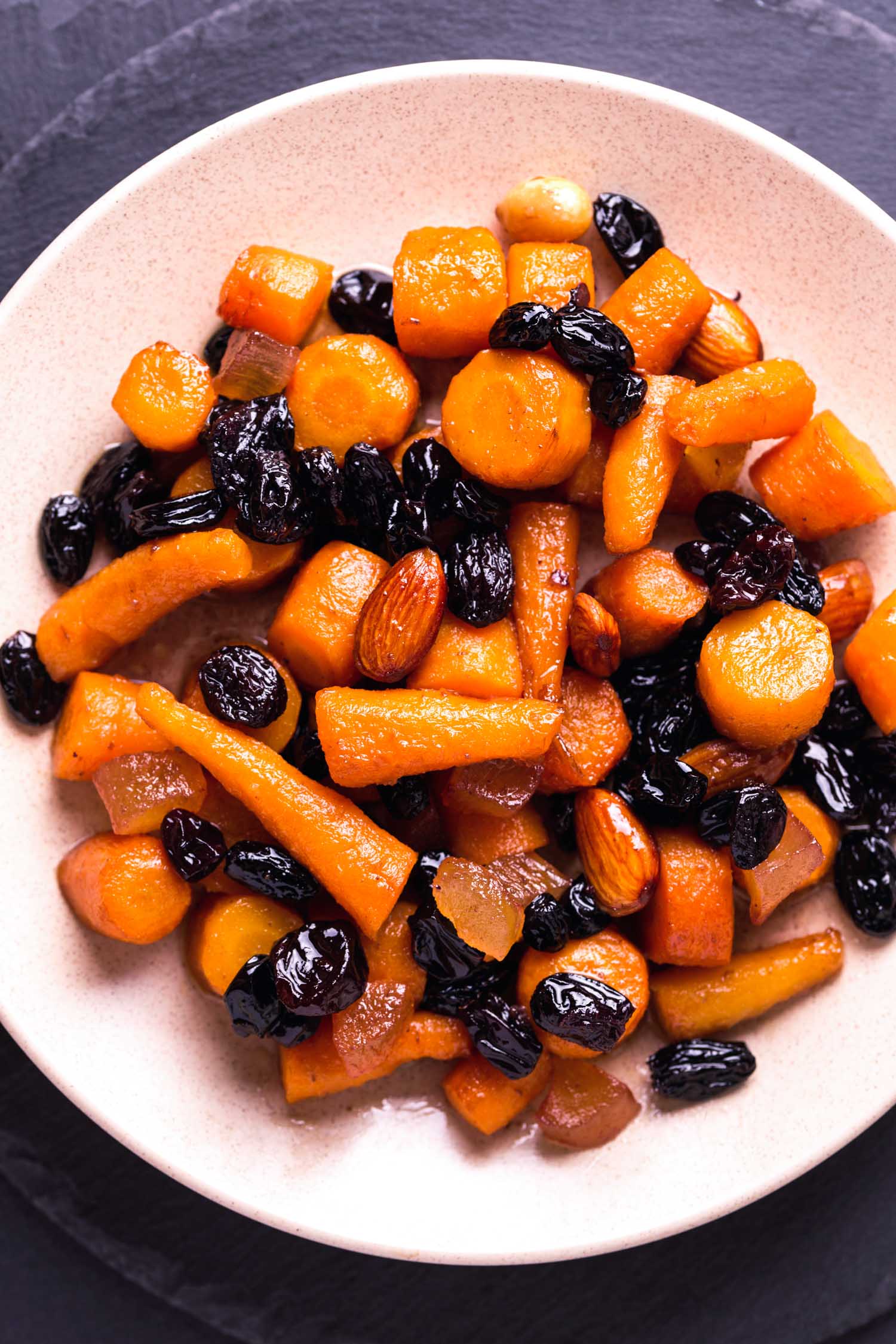 An easy sweet stew made with dried fruits, carrots and root vegetables such as sweet potato. This is very common during Rosh Hashanah when dinners often include sweet dishes.

It is cooked over slow heat and includes cinnamon and similar spices. It may also include brisket or other meat, but is commonly cooked as a vegetarian side dish. Simply rendered chicken fat, and oh it sounds amazing. Schmaltz is used in some chassidic communities in Passover as they do not use processed foods.

Chicken fat is slowly cooked over low heat and then it melts into creamy goodness. It is used for everything from salad dressing to potatoes.

While chicken fat is the most common, some use decadent duck or goose fat to make schmaltz.

What would a holiday be without some unhealthy indulgences! A common treat is gribenes, which is chicken skin and onions fried in schmaltz. A classic Eastern European soup using beets, the original recipe uses beef and dairy. To keep it Kosher, one is used both not both – most often a bit of sour cream on top.

Borscht adds colour and as a root vegetable is readily available in the Spring. The flavour is both sweet and earthy, making it a great Passover food. 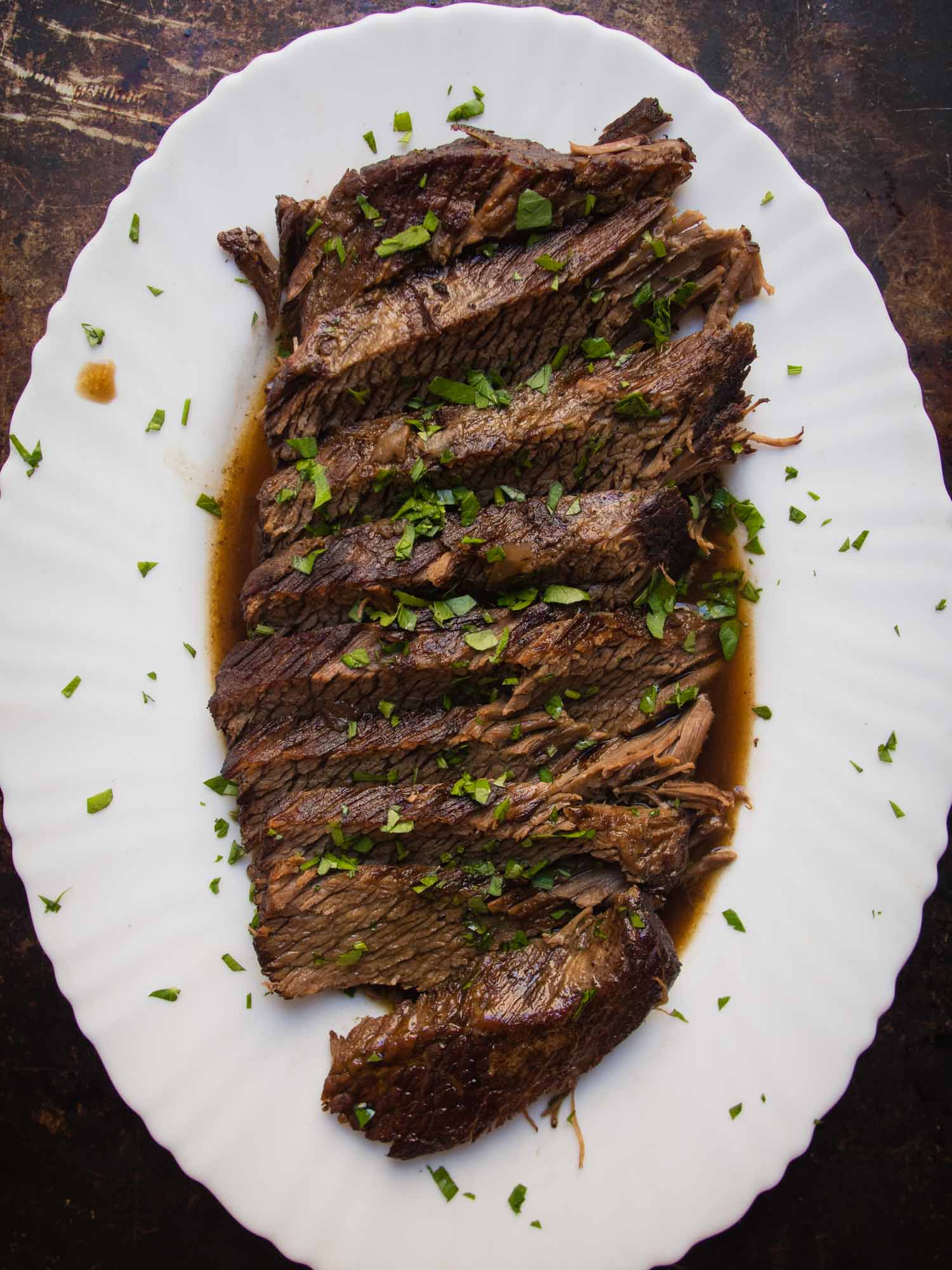 One of the most common foods at Passover. For a Seder meal it’s great to feed a crowd.

In particular sweet brisket is very common, which may mean the meat is cooked with chili sauce or ketchup and soda.

It’s also great to make ahead and slice when everyone is ready. And it’s common to buy one for twice as many people at the Passover meal to ensure there will be leftovers. Other than brisket, roasted chicken is one of the most common Passover food. it’s a great centrepiece as it’s simple to make and easily feeds a crowd.

When making chicken recipes keep in mind that with any Passover food meat cannot be combined with dairy and so oil must be used instead of butter.

It can also be cooked in the slow cooker. Here’s an easy Instant Pot turkey recipe that would also apply to chicken and does not require any dairy. 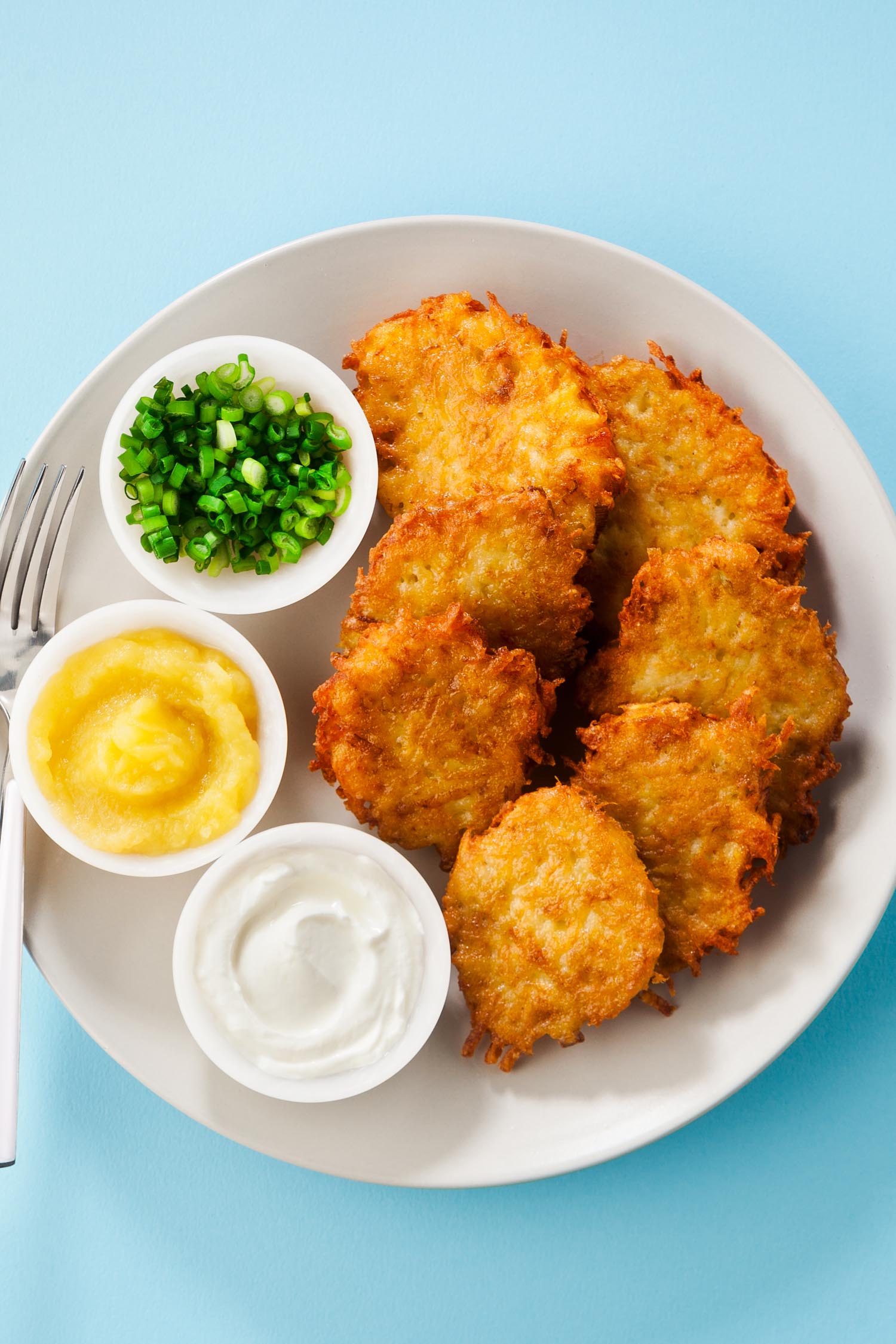 Latkes are a traditional Jewish food served during Hanukkah. To make them appropriate for Passover the flour is replaced with matzo meal.

Shredded potato, onions and egg are shaped into a pancake form and pan fried. They are absolutely delicious with a bit of sour cream. 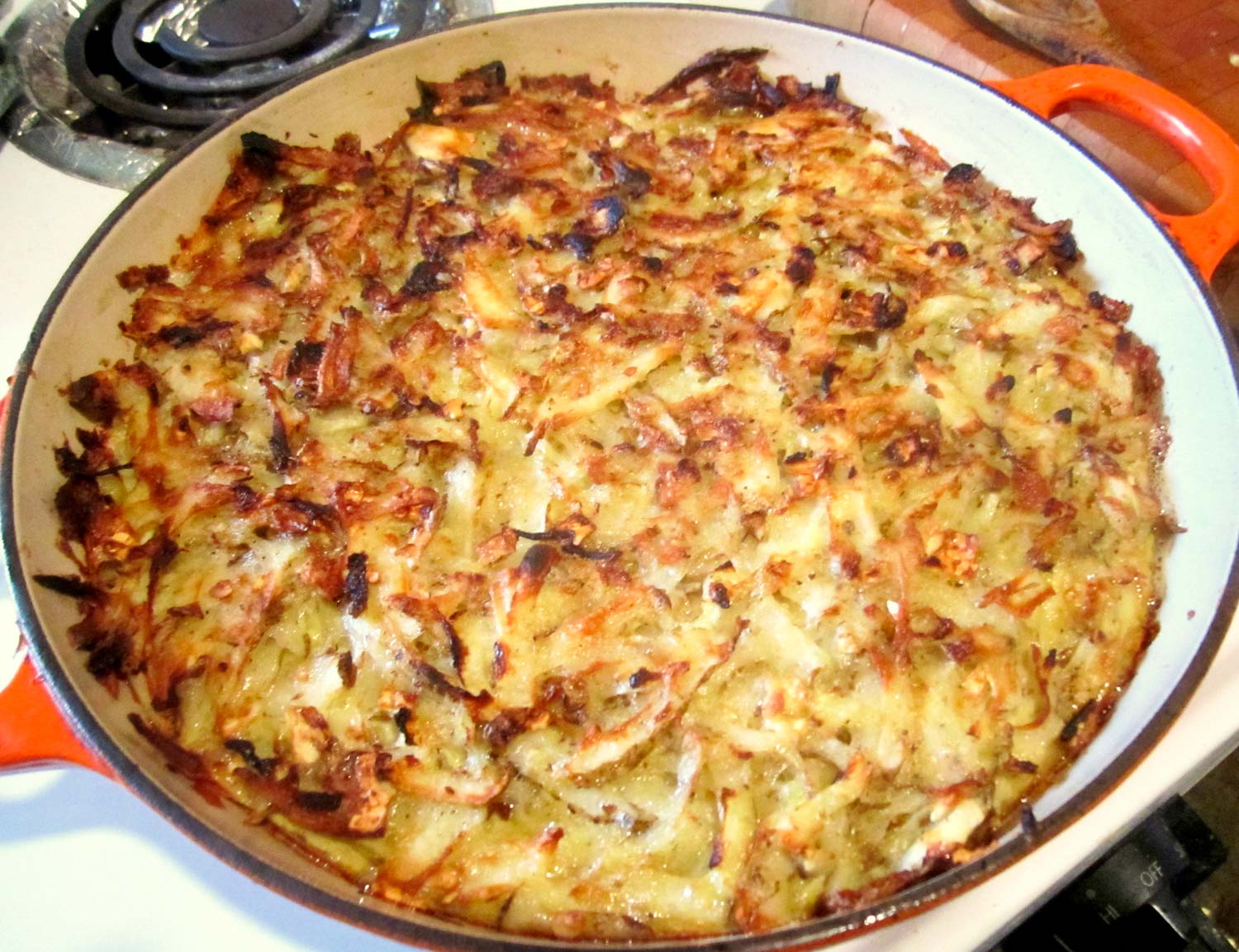 The ultimate comfort food. Passover kugel is a bit different than other sabbat kugels as flour is not permitted. In this case to make the casserole it’s a potato dish, often shredded potato with onion, egg and schmaltz.

The potato kugel is thought to be the original kugel, before rice and noodle versions.

No flour doesn’t mean no noodles.

Instead passover “noodles” are thin strips of cooked egg added to soups, such as matzoh ball. Known as lukshen in Yiddish, they are like thin egg crepes, made with potato starch. 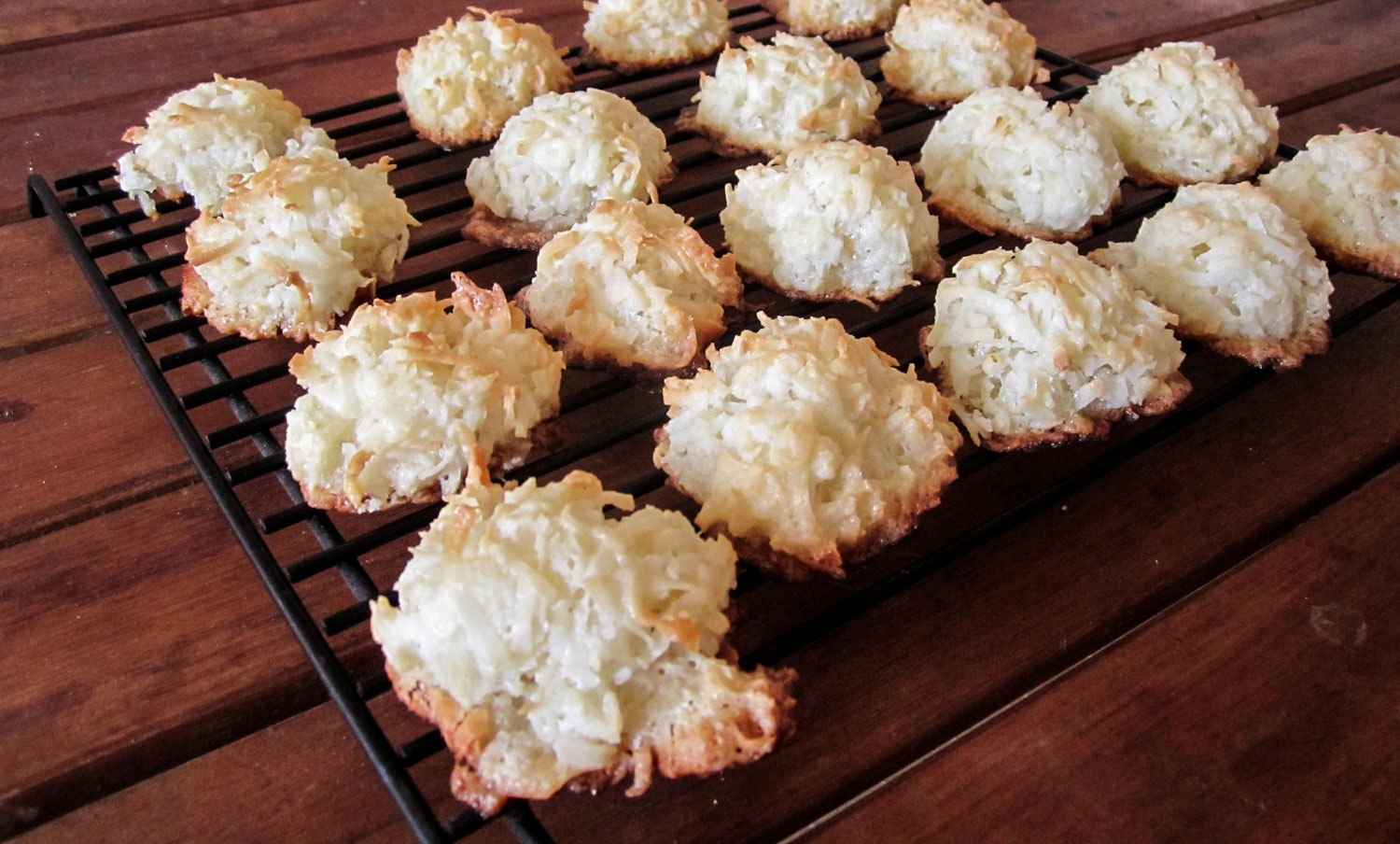 No dinner is complete without dessert. During holidays like Rosh Hashanah, there are so many delicious desserts with honey and other sweets.

But Passover desserts are a bit challenging as they cannot contain flour or rise.

It is very common to have a fruit salad, gluten free cakes and cookies are often available. Until recently coconut macaroons were probably the most popular passover dessert.

But if you can make try these chocolate toffee matzoh crack, and you’ll never feel like you’re missing out. 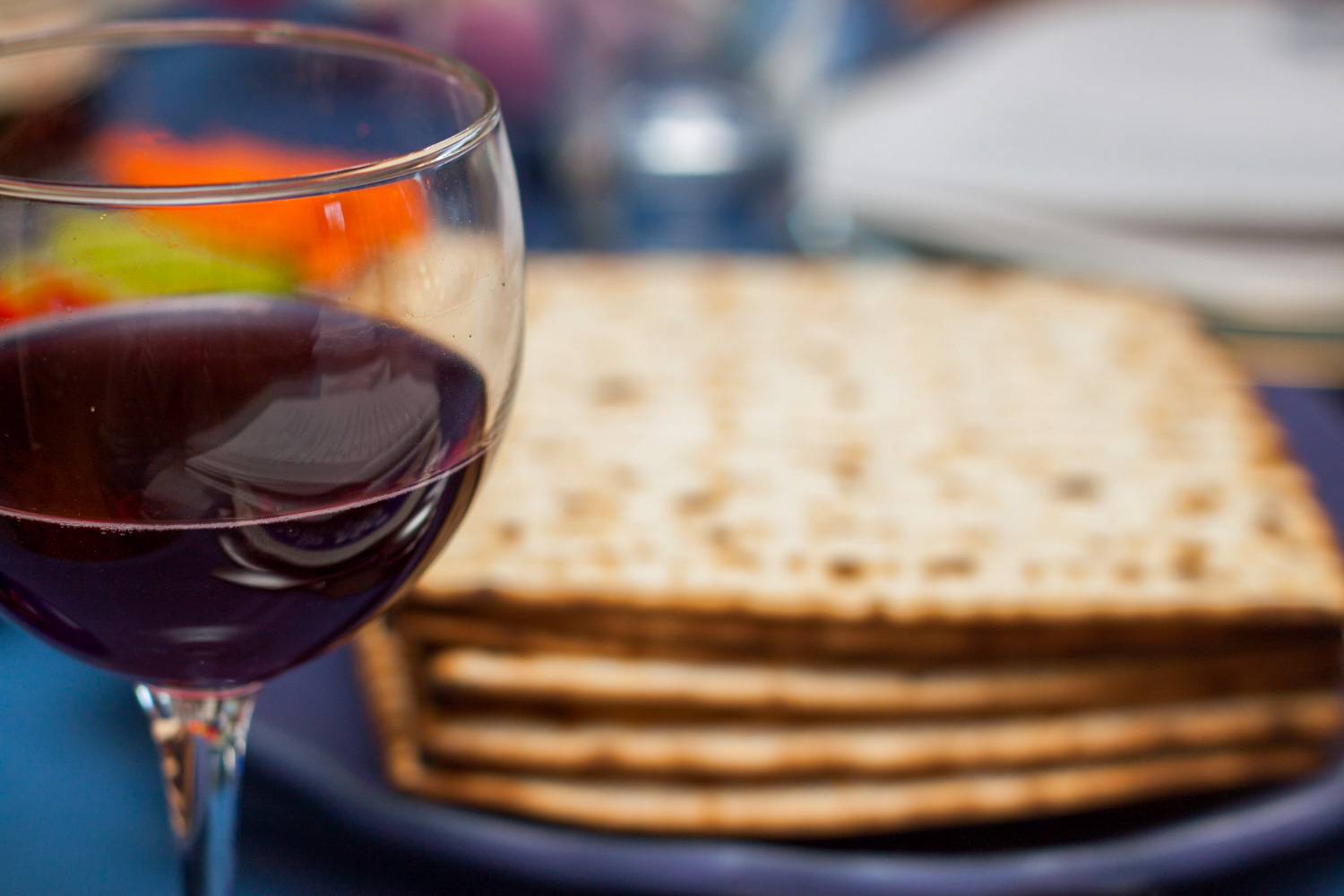 Although wine often makes an appearance at dinner during other Jewish holidays, it is especially important during Passover.

During the Seder meal, guests drink four glasses of wine, during specific points of dinner that represent each of the four promises of redemption from the exodus.

Often the front door is left open and one glass is set out for the prophet Elijah, who visits during the Seder dinner.

Depending on the host it may be kosher Seder wine, which has a reputation for being so thick you could cut through it, regular wine or also grape juice.

What other great Passover food should be added to the list? What is your family favourite?