Yes it’s possible! You can cook a Thanksgiving Instant Pot turkey with a crispy skin.

Nanny always made thanksgiving turkey growing up and she cooked it low and slow until it was so dry.

I loved her dearly but she was a terrible cook.

She could make Nova Scotia chowder and Christmas cherry balls but turkey was not her thing.

In Search of a Moist Turkey

I don’t think many people do it well, which is why gravy exists.

Toward the end of her life I took on the task of cooking Thanksgiving turkey and I have tried so many methods.

For a number of years I brined it, I once put butter underneath the skin, last year I spatchcocked the turkey.

I usually follow Alton Brown’s method of high heat to begin and reduce to low.

But there’s just something about turkey that makes me want to have lobster at Thanksgiving instead.

Or at least a whole fish?

But my mother loves turkey and so that will never happen. So this year I tried an Instant Pot turkey.

I figured if the Instant Pot Peruvian chicken turned out so well then a turkey should as well.

Using this 8qt model of the Instant Pot., which can handle a 8-9lb turkey on a trivet.

It sounds small but I usually cook 2 turkeys anyway as I prefer smaller ones than one gigantic turkey.

My family doesn’t like turkey skin (travesty, I know) so I cooked it the simplest way possible. No browning.

I put 1/2 onion, carrot, 1 celery stalk and 1 bay leaf in the bottom of the Instant Pot with 1/2 cup of water and set the turkey on the trivet.

Using the Instant Pot chicken method of 6 minutes per pound with a 10 minute NPR.

The turkey falls off the bone, I simply pushed the skin away (it’s white and unappetizing) and carved the meat onto a platter for everyone to eat.

It was so moist and flavourful.  No need for gravy – although we had it anyway.

How to Get Instant Pot Turkey Skin Crispy

I knew my nay saying friends would say the skin is one of the most special parts of Thanksgiving dinner.

So I cooked another turkey with the same method.


While it was on NPR I preheated the oven to broil. I carefully removed the turkey on the trivet to a sheet pan.

Note: I always use this digital cooking thermometer when cooking meat.

It’s less than $10 and it’s the only way to know if meat is at a safe temperature plus you don’t risk overcooking meat.

Should You Stuff Turkey?

I used to think that stuffing (or dressing as we call it) HAD to be in the turkey – that’s where all the flavour is right?

A few years ago I tested two kinds of stuffing.

One in the turkey and another in a casserole dish that I made and then poured turkey drippings over before baking – NO ONE knew the difference.

What everyone loves is the turkey dripping flavour aka fat, so we just pour it over the stuffing and cook it while the turkey is resting.

This method changed how I cooked because the problem with turkey is that it dries out fast and stuffing prolongs the cooking time.

Remove the stuffing and cook a better bird.

Although this recipe calls for cooking a whole turkey in an Instant Pot over the years I’ve been asked about cooking turkey breasts several times.

A seven pound turkey breast fully cooks for about 35 minutes in an Instant Pot.

I cannot stress how easy it was to cook the Thanksgiving turkey in an Instant Pot.

We also used the drippings for gravy.

It would be easy enough to remove the onion/celery/carrot/bay leaf and make the gravy on a low saute or move it to a sauce pan on the stove.

And the next day consider making this Cuban Elena Ruz sandwich.

If you’re using kitchen bouquet to make gravy, take a pastry brush and paint the turkey with a teaspoon or two before you put it under the boiler.

It will give it the darkness of having roasted turkey all day.

For larger or smaller turkey simply use the 6 minutes per pound rule.

Pin It: Whole Turkey in an Instant Pot 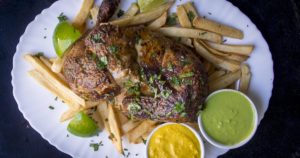 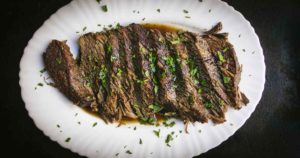 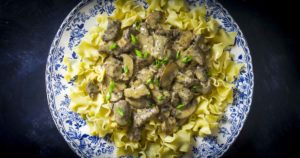