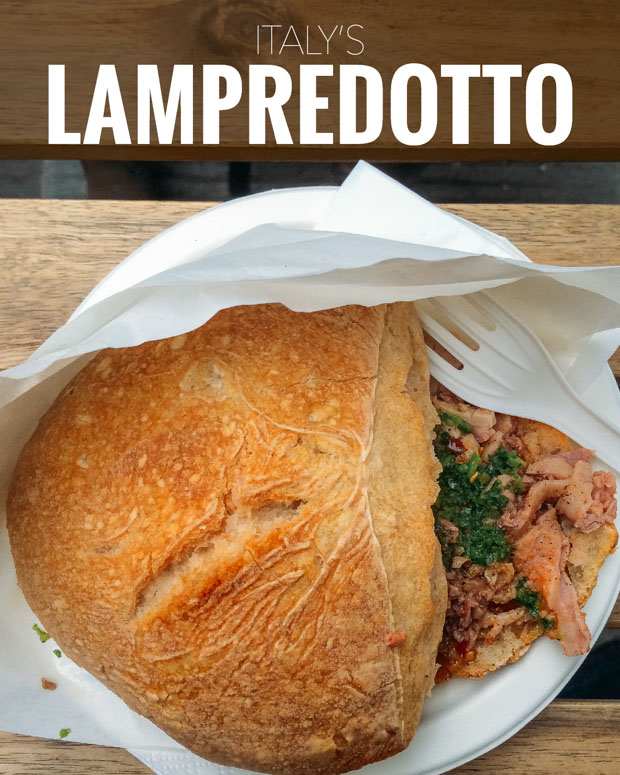 Did you know May 21st is Lampredotto Day in Italy?
In Florence one of the things we wanted to eat most was the lampredotto, here’s what Dave thought of this traditional Tuscan sandwich.

A braised stomach made from the fourth, and final stomach of the cow, lampredotto is the most popular street food to eat in Florence. Panini di lampredotto is a sandwich that unites, you’ll find bankers lined-up behind construction workers with curious tourists all looking for the same thing.

The tripe is braised with tomato, celery, parsley and onion for hours, thinly sliced and served on a round bread roll that is dipped in the cooking liquor and garnished with a choice of salt and pepper, salsa verde and chili sauce.

History of the Lampredotto

Much of Italy’s great cuisine came from the need to use every part of an animal. Like many other classics, it was for peasants or lower class workmen. Its unusual name comes from the meat resembling the lampreda eel’s mouth that once prospered in the river Arno.

Dating back to the 1400s, workman would gather for lunch near the river Arno as you could buy tripe for less than a nickel. In the 1800s, cooked tripe carts appeared, where men known as trippaio would push them around by hand and later to bicycles. Today there are modern trippai and specifically lampredottai stalls all over the city.

Where to Eat a Lampredotto

While posh hotels like the Four Seasons Florence offer their interpretation of this famous sandwich, it largely remains a street food isolated to the city limits of Florence.

While you can find lampredotto alongside other tripe sandwiches at tripe stands called banchini dei trippai  there are also exclusive lampredottai stands.

The most famous vendor is likely Nerbone at Mercato Central, which has been making the sandwiches since 1872. Another local favourite is the Trippaio de Porcellino in Pizaza del Mercato Nuovo near Ponte Vecchio, Orazio is the current trippaio but the shop was originally opened by his great grandfather and passed down through generations.

If you want to try them all check out this free iLampredotto app.