I like to do my research before traveling anywhere but I didn’t have time to check out where to eat in Montego Bay.

Fortunately Visit Jamaica flew me in to work on a sponsored program so I had confidence that we were going to great restaurants with Jamaican food.

Jamaican food is some of the best in the Caribbean, with a rich history of both immigrants and colonizers from England, Spain, Africa, India and China the food is very diverse.

Unlike Cuban food, you’ll find lots of spice and while it’s similar to Bajan food in Barbados, it has unique twists.

Montego Bay, known to locals as MoBay, is the second largest city in Jamaica. The best time to visit begins in mid-November but you’ll get great weather through April, when it begins to reach really hot and humid temperature.

There are plenty of international and local food options but I didn’t come to Jamaica to eat sushi. Yet, a girl can only eat so much food in three days.

Instead of admitting defeat I asked a lot of locals for their favourite restaurants in Montego Bay.

Like many great food spots locals will say the best food is from their mother. Not wanting me to show up on their doorstep they also offered up great options for Jamaican food and popular seafood spots.

The remaining were suggestions that arose so often from locals that I wanted to share them.

Where to Eat in Montego Bay 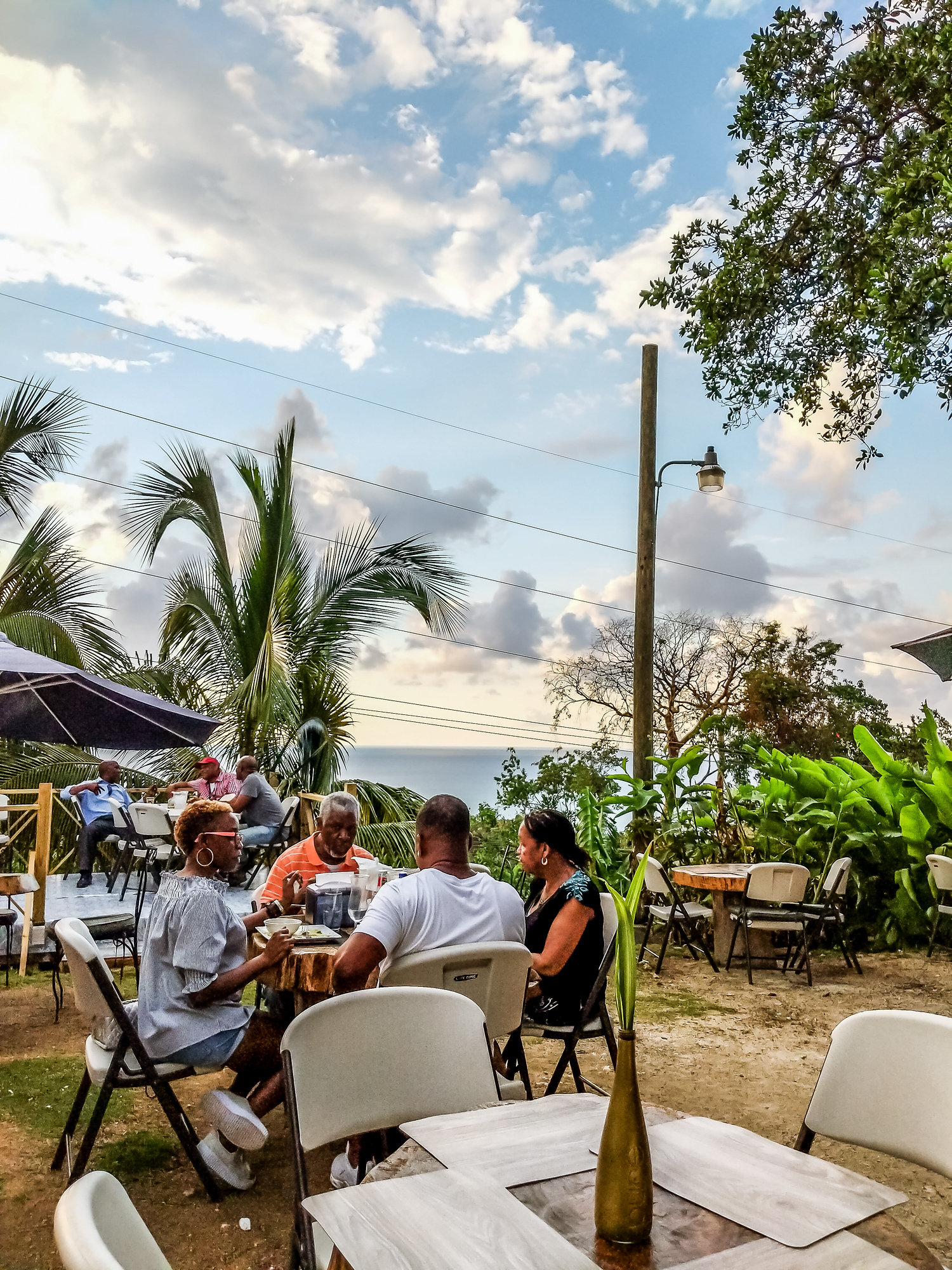 My favourite Montego Bay restaurant, it’s located just above the Strip and full of locals. Bernard ‘Peppa’ Morrison is known on the island and once worked at Chill Out Hut before opening his own place.

The menu is packed with traditional Jamaican food. The fish is so fresh you need to go pick your choice of fish. Go with a group and share and don’t forget to order the bammy, stamp and go or the oxtail.

Prices are affordable. You could easily get a main course and a drink for $10.

The atmosphere is very laid back and feels like you’re eating in someone’s backyard. Locals are very friendly and you may find yourself in a conversation with the table next to you. On Wednesday night’s there is live music. 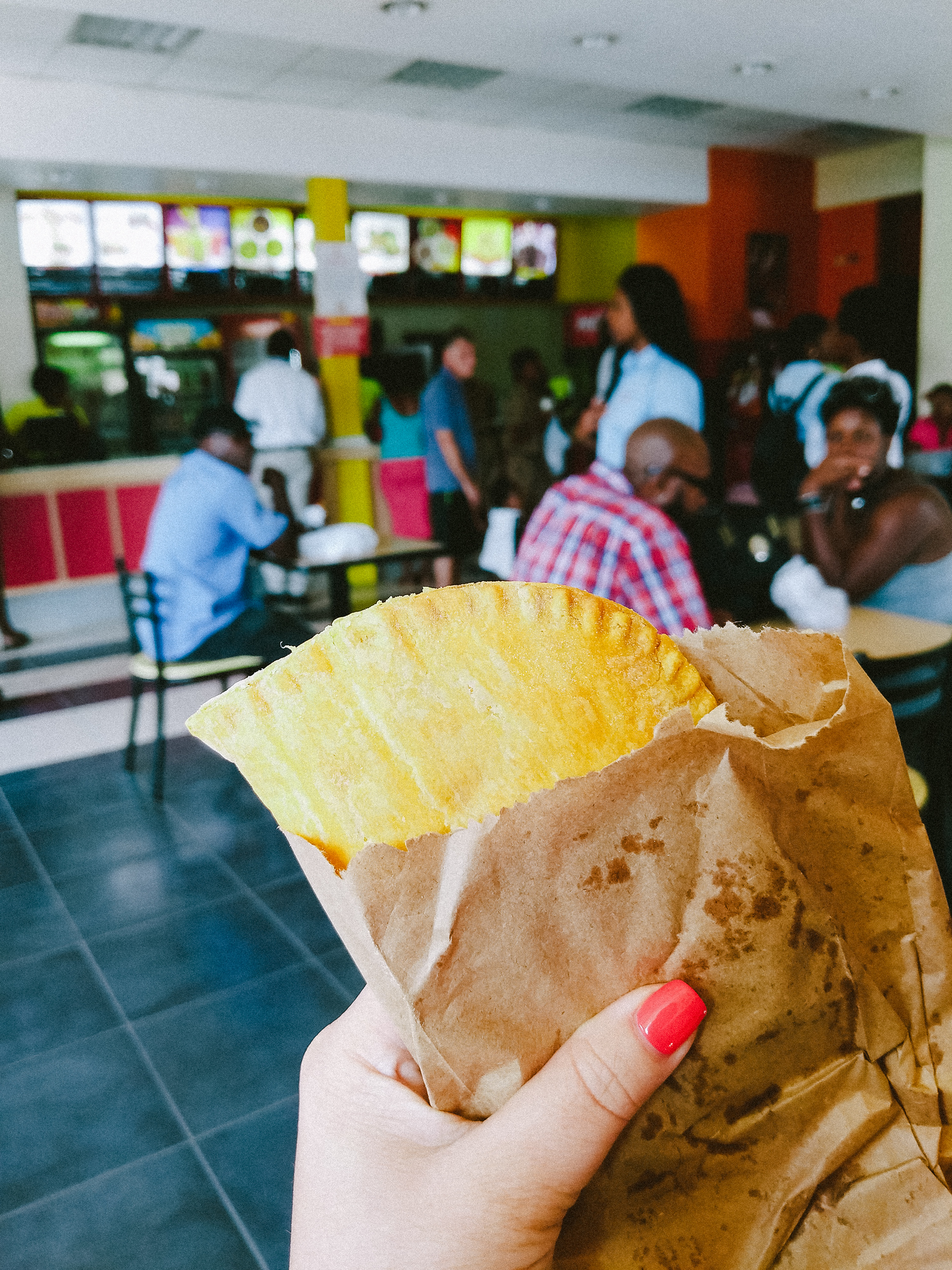 Wondering where to eat in Montego Bay to get the best Jamaican patty?

The competition is fierce in Jamaica with the top three chains being Juici, Tastee and Mothers.

Only Juici and Tastee are in Montego Bay and it’s really tough to say which patty is best.

I think Juici slightly edges out Tastee for its flakey crust. But it’s such a personal preference I urge you to try both.

Juici Patties
Locations all over the Jamaica I never thought I would recommend eating at an all-inclusive resort, especially at the buffet. However, the best aspect about this resort is the food.

Sure it is a very large buffet with lots of vegetarian and meat options. Yet the most impressive aspect is its traditional Jamaican food offerings.

From brunch through dinner you’ll find extensive options that change daily. I was so thankful to try ackee and saltfish for breakfast because I realized I didn’t like it at all.

Often resorts will give you a small taste of local flavour but RIU takes it an extra step as it is the most popular resort for Jamaicans.

Local food needs to be good and plentiful. I really appreciated this aspect as I don’t often choose all-inclusives because of the lack of local food. 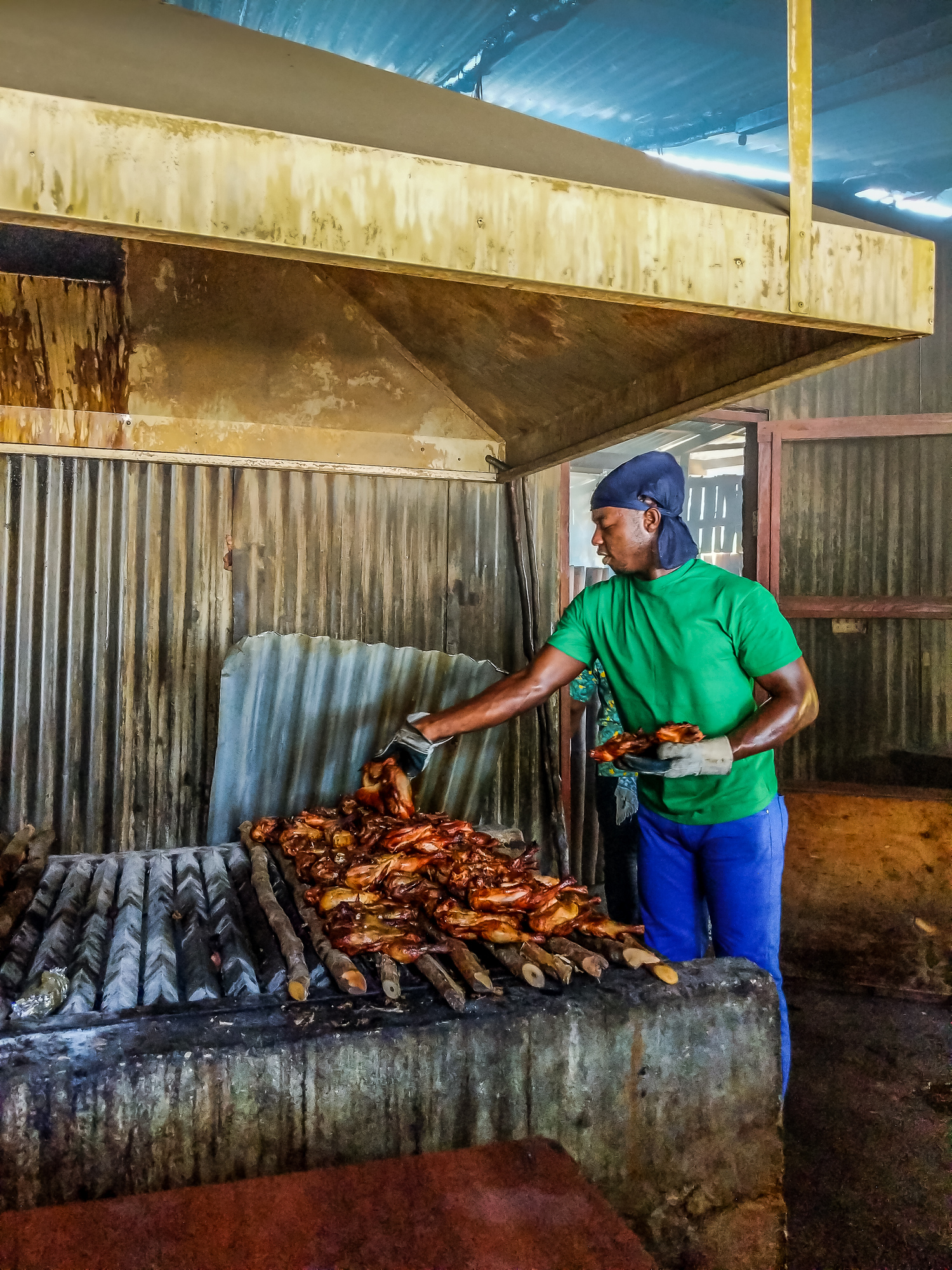 I don’t really need to tell you to visit Scotchies as it’s only every single list for where to eat in Montego Bay.

It is pretty much a mandatory and every tour bus and driver will take you here.

If you want to go for lunch make sure you arrive before the buses at noon and order the breadfruit along with your chicken if it’s in season. 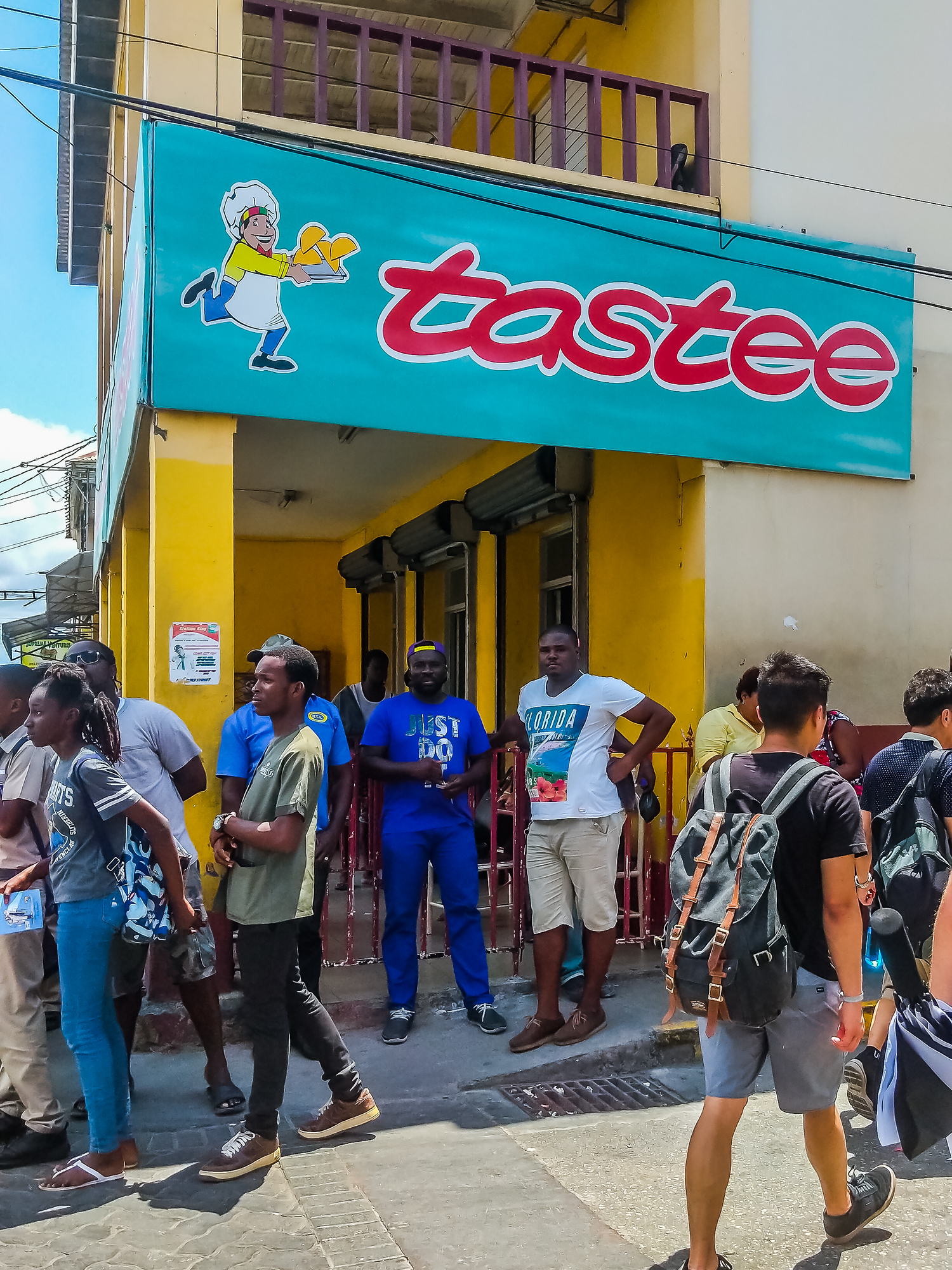 It was very difficult to choose whether I preferred Tastee or Juici.

Perhaps my patty palate isn’t sophisticated enough but as Amber from With Husband in Tow explained, she wouldn’t kick this patty out of bed even though she also preferred Juici.

For the record her husband chose Tastee.

Locations all over Jamaica

So technically not Montego Bay but close enough. The second stop on a Falmouth Food Tour this bakery is crammed with locals.

As we were attempting to eat the massive portion of a beef patty stuffed inside a coco bread we noticed men arriving and filling shopping carts with bread.

I thought the beef patty was a distant third to Juici and Tastee but oh that coco bread was amazing! I ditched the patty to save my stomach space for that fluffy white bread.

Just go and get the bread and thank me later. 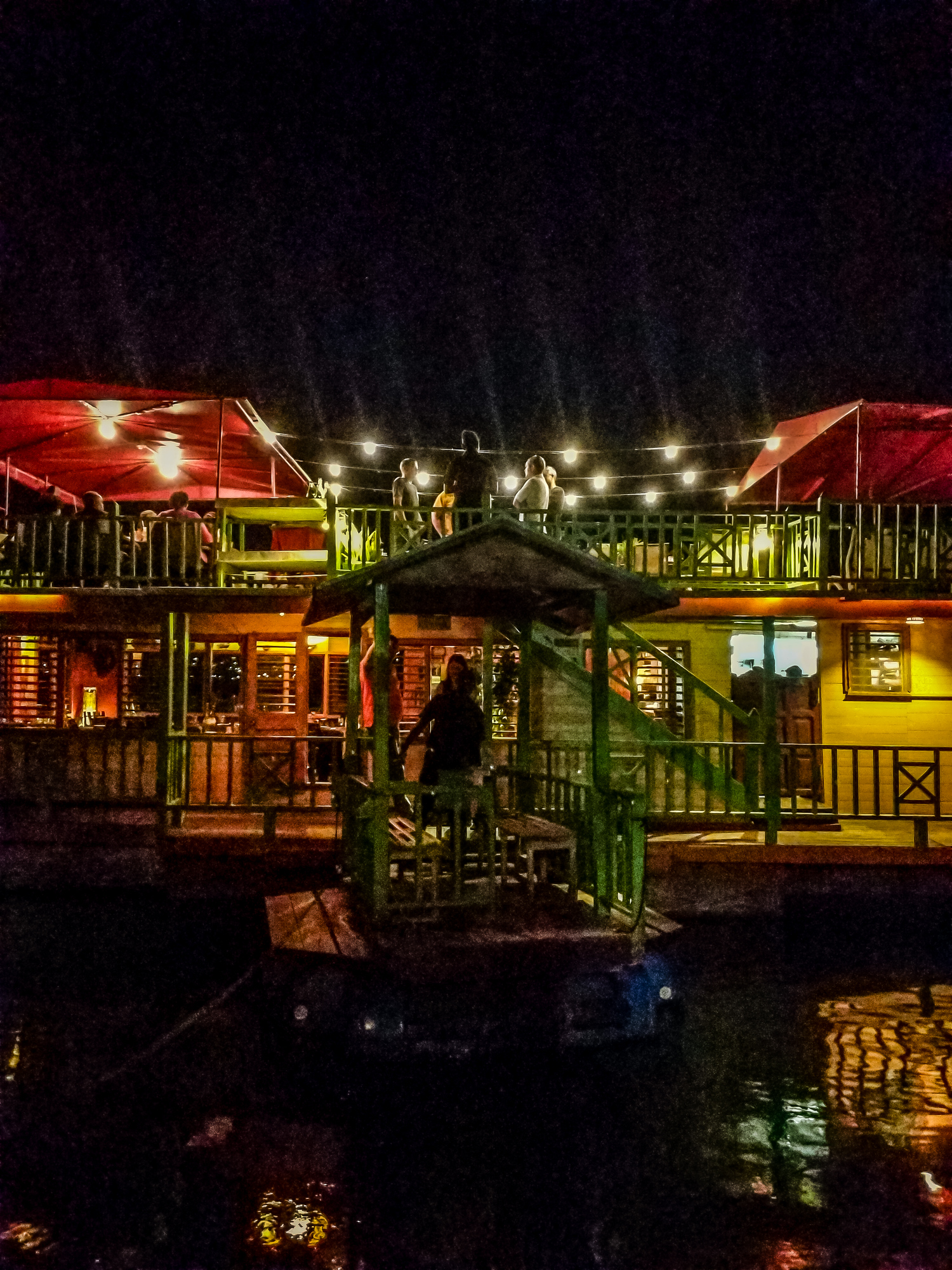 Don’t let the website with saccharin couple photos deter you from going to the Houseboat Grill. While there were couples it wasn’t so romantic that groups of friends wouldn’t dine there.

Also, it’s a unique dining experience as you need to be shuttled over on a 15 second floating jetty.

The houseboat has a long history of celebrities, Steve McQueen stayed here while filming Papillion and it was used as a green room for the 1982 Jamaica World Music Festival.

While the menu is interesting I wish there were more options with local Jamaican flavours.

However, I do appreciate that they allowed me to modify the surf and turf so that it was only surf and I could choose the shrimp with spicy scotch bonnet beurre blanc.

There’s a daily happy hour from 5:30-7pm with 2 for 1 offers on local brands. This would be an excellent location to have a cocktail and watch the sunset.

Where to Eat in Montego Bay – Local Picks

Here’s a caveat I didn’t include Margaritaville because I find it to be a tacky chain and I’d prefer something less obnoxious. But time after time locals suggested it.

At first I thought it was because there are a lot of tourists that like a generic but familiar experience, but when I turned up my nose locals explained there is a lot of Jamaican food on the menu. I’m personally not tempted but to each their own.

The Pelican has been around for over 50 years and is well loved by Jamaicans.

If you want a truly Jamaican food experience go on Sunday for the ackee and salt fish along with locals.

But warning you’ll need to arrive before church is out as the place becomes packed.

This fast food spot has a great local reputation good and is especially good for kids.

You can find all the traditional Jamaican food favourites from festival through jerk chicken with plenty of healthy options too.

If you want to have dinner and then head to a nightclub, this is the place to do it as the waterfront property offers it all. It also includes a menu that caters to both timid eaters and the more curious. Seafood and curry goat are as popular here as the burgers.

But check the hours and nightly theme as it can change wildly. And make a mental note to look for Usain Bolt who sometimes shows up.

You can’t quite beat the island vibe here. Chill Out Hut is as popular with locals as Peppa’s for its great food without the fuss.

Located on the Hip Strip, if you’re looking for a relaxed sports bar this is the place to go.

It’s popular for locals to drink or play pool so you know the food better be good. Guests rave about the steamed fish along with the cow foot rice.

Although everyone talks about Scotchies as the manadatory restaurant for where to eat in Montego Bay, there are other great jerk restaurants in the region.

You’ll need a car to get to Scotchies in the Holiday Inn Village Shopping Centre. But if you’re staying near the Hip Strip head over to Pork Pit for some of the best jerk in Montego Bay.

The ambiance is relaxed like the Chill Out Hut, just grab your food and a bottle of Red Stripe or rum punch and head to the patio.