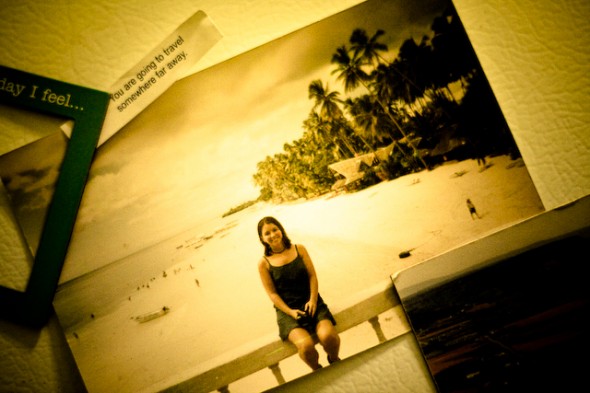 Ten years ago I finished university and was faced with paralyzing anxiety of entering the real world. Snubbing the next logical step into adulthood I applied for international internships.

After a month of rejections I called around to the NGOs that had yet to contact me with PFO letters.

One of them responded that the position had changed, was now in the Philippines, and was I still interested? If so, could I be there in two weeks?

Without hesitation I asked if three would be okay. Just to be safe I searched for images of the Philippines and saw pages and pages of beach front huts. I had no idea what Filipino food was but it would be on a beach right?

What could be better?

Three weeks later this small town girl was on a plane to live it up on the beach in South East Asia.

The above photo is of me at 23 on the first day of the new millennium.

The world hadn’t blown up. Robots weren’t enslaving us. There was no need to eat Soylent Green – yet.

I look back and I’m not sure if I was naive or fearless to just get up and go in three weeks. I had no idea what I was getting into, it didn’t matter to me, but I was about to find out.

Those 8 months changed my life. There was no one and nothing to define me. I learned who I was in unfamiliar and often strange circumstances.

I lived in the moment.

Here I am 10 years later, rather than checking off all the obligatory great job/ friends/ relationship/ apartment boxes I’ve decided to walk away from it all. Not forever, but a year or until the money runs out.

Parts of the Pig that are Delicious »