This homemade pancetta recipe is so easy you’ll be wondering why you ever spent so much money buying it!

They say that you learn something from every relationship, and I would definitely agree with that.

Early on I learned from my ex how to make pancetta, in just 60 seconds.

He even made this video below for me so that I could do it on my own.

The relationship lasted four years and I learned a lot from being with a chef as well as opening and running a restaurant.

I also learned an incredible amount about curing meat, something I had always wanted to do but was so intimidated.

RECOMMENDED CHARCUTERIE BOOKS
Charcuterie by Michael Ruhlman
In the Charcuterie: The Fatted Calf’s Guide
Charcuteria: The Soul of Spain

I was touring Prince Edward Island restaurants and visited the restaurant he just opened, Terre Rouge.

I was blown away by the charcuterie board that I couldn’t say no to his invitation to see the curing chambers in the back.

While in his kitchen I confessed my secret desire to make my own charcuterie.

He told me it was much easier than I thought and I would come to learn the secret was pink curing salt.

He first started in his fridge and then bought an ordinary bar fridge and started curing meat there.

After watching the video I was able to make pancetta on my own – with some help from him.

The relationship is over but that skill I’ll take with me and share it with you.

But I must share this disclaimer that I am far from an expert and am only sharing what I have personally learned.

Pancetta is one of my favourite cures because it’s so easy anyone can do it.

Often called Italian bacon, pancetta is cured pork belly. While it is the same cut of pork, it is salt cured with spices then air dried.

What is the Difference Between Pancetta and Bacon?

Although pancetta is often called Italian bacon they are made differently. Pancetta is dry cured with salt. However, bacon is wet cured by brining or injecting and must be cooked.

Some people say that the difference between pancetta and bacon is that pancetta is never smoked but that’s not really true.

American-style bacon is difficult to find in Italy and so often an English translated menu will say bacon when it really means pancetta.

Can You Eat Pancetta Raw?

Yes. It is common for Italians to eat pancetta raw on its own, something we never do in North America. It has been cured or preserved and can be eaten.

Can I Substitute Bacon for Pancetta?

Yes. They are both cured pork belly. However, as they are cured differently bacon tends to be greasier. But if it’s cooked crispy it gives great depth like pancetta.

Whole muscles are a great way to start curing meat because they are less dangerous.

Salamis have lots of little crevices for bacteria to get trapped.

While charcuterie seems cool, remember bacteria can be deadly so you need to be careful when preserving meat.

This is also why making pancetta is a great place to start – it’s cooked after it is cured.

Why Do We Use Salt to Cure Meat?

Virtually every food group can be salted to preserve them.

Most fish (avoid shellfish) and almost every kind of meat can be preserved through dry curing.

This is due to the chemical response of their proteins mixing with salt causing an exchange of moisture.

Water leaves the muscle, is replaced with salt, which dehydrates it.

Salt makes aging meat safer because it reduces the water content of the meat and creates an inhospitable for bacteria to cause rot.

Sodium nitrate and nitrite are two common food preservatives. When used in food production they can control bacteria growth.

But when consumed they can be dangerous to our bodies.

Both are normally occurring chemicals that our bodies rely on. Spinach and celery are loaded with them and both are now being used as additives in curing.

Our bodies convert nitrates into nitrites inside our stomachs everyday to control bacteria. The same process is happening within a salami.

Lactobacillus bacteria feeds on the sugars in the sausage and produce acid and nitrites work to keep harmful microbes from growing most importantly controlling botulism.

They also help to preserve the colour of the meat (salami, beef brisket).

There has been a lot of research on nitrites obviously the concern was carcinogenic and cancer.

But it has been found that the levels found in food are not extremely harmful if consumed in moderation.

All of these salts are interchangeable. Many prefer pink salt but others use Prague Powder 1 and 2.

In Europe they still use potassium nitrate in the form of salt peter.

Most muscles don’t require pink salt to prevent botulism, as they are dry cured and surface has been exposed to salt for extended periods of time.

Pancetta is a brine that starts as a dry cure.

Over the cure time as it pulls moisture from the belly it becomes a wet cure that can be re-distributed over the belly to help it cure.

On average the belly will stay in cure for 3 days per 500gr of pork.

After this the pancetta can be rinsed of cure and rolled up and tied and hung to air dry out of direct sunlight.

It can be hung flat and not tied but with a hook or string through its corner. I prefer flat over rolled pancetta.

Traditional the pancetta recipes are crusted in cracked pepper.

This historically deterred bugs from eating the meat while it cured. Bugs hate the pungency of black pepper.

The original recipe for pancetta is made to be cooked and eaten. But the flat ones can be dried 4-6 months and can make an excellent accompaniment to a charcuterie board.

How Much Salt Do I Need?

Whole muscles should be cured by weight and the salt should be measured also by weight.

For example for a 5lb pork belly requires a quarter cup of salt -2oz – plus flavouring and nitrates.

How Long Do I Need to Cure Pancetta 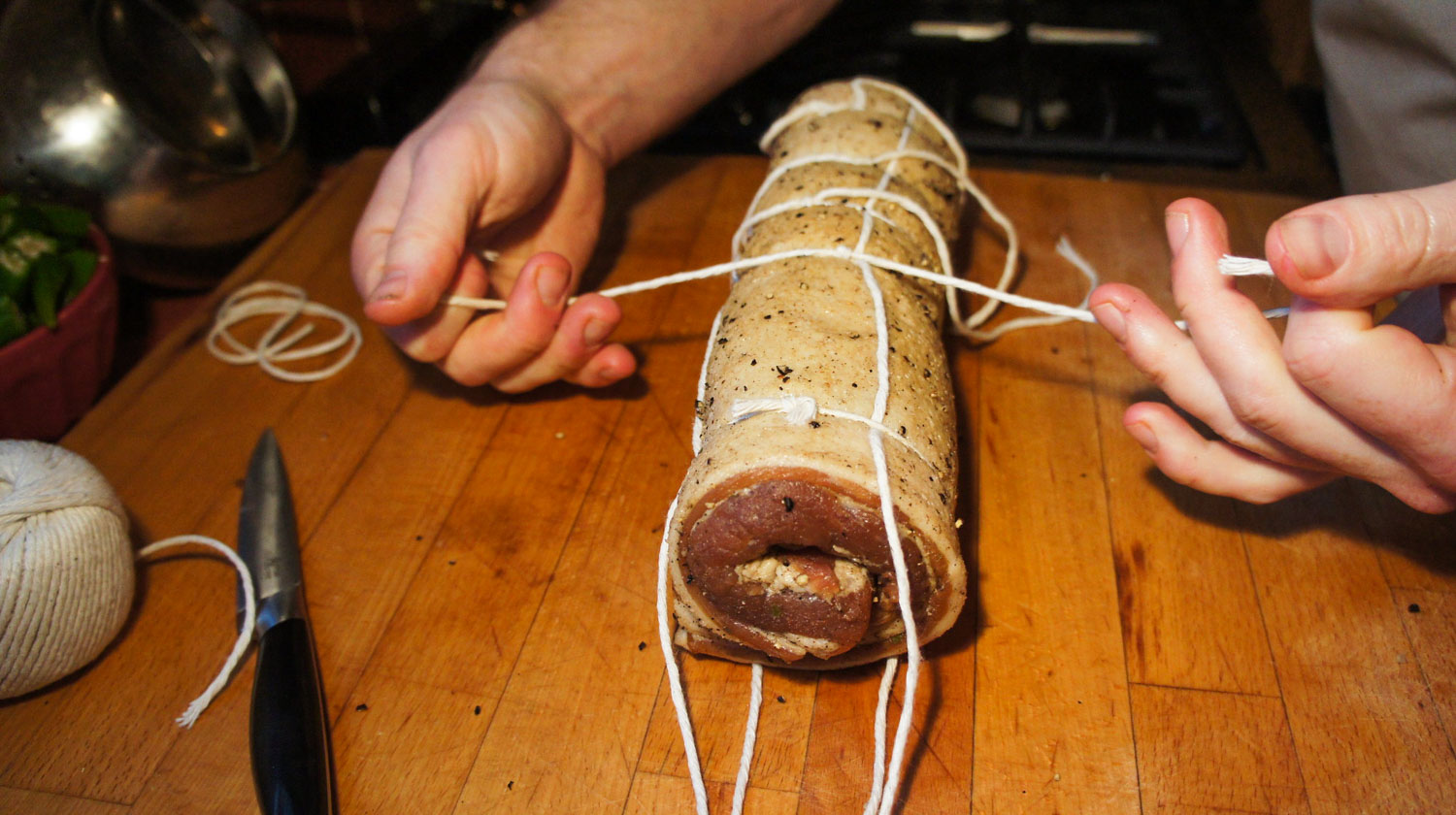 Note: I prefer my pancetta flat, instead of rolled, it’s also easier for air to circulate around the meat.

Pin it for Later