Rice, cooked in coconut milk with beans and spicy pepper, Caribbean rice and beans is on the Caribbean slope of Costa Rica.

I had already warned Rease that I was armed with a list of 30 things to eat in Costa Rica over the next eight days. She wasn’t surprised as we both wanted to eat traditional Costa Rican food.

However, Caribbean rice and beans weren’t on my list because I thought that was gallo pinto.

Gallo pinto is the national dish of Costa Rica as well as Nicaragua. However, Rease was confused when, speaking in perfect Spanish, people in San Jose would respond she must try “rice and beans.”

Why would they respond with this dish in English? Why didn’t they say she should eat gallo pinto? We knew what it was.

Because in southern Costa Rica, rice and beans is a different dish.

It is not gallo pinto. It is white rice and red beans made with coconut and spicy Panamanian pepper.

You can find this dish throughout the Caribbean, in particular it’s very common in Belize, Honduras, Jamaica – where it’s better known as Jamaican rice and peas

Food in southern Costa Rica uses a lot of coconut and a bit of mild spice to flavour its food.

This makes it one of the more interesting cuisines in Central America.

Like Mexico, there is always a bit of hot sauce as a condiment if you want to spice things up.

One of the great things about Caribbean rice and beans in Costa Rica is that it is completely meatless. It’s a great option for vegan and vegetarians as long as chicken or meat broth is not used.

When we arrived in Puerto Viejo we had just enough time to get a welcome drink at Banana Azul, and change in time for a cooking class.

I had reached out to Lokal Travel to take the food tour of Puerto Viejo.

I reached out to Lokal Travel because I prefer to work with local providers to ensure that the money I spend when I travel impacts the community.

However, sometimes it’s hard to find local providers on the ground and to spend the time to research whether they are reputable.

I really like Lokal Travel’s approach to provide local, sustainable options for travelers by matching them with local providers.

You can read more about their selection process here. 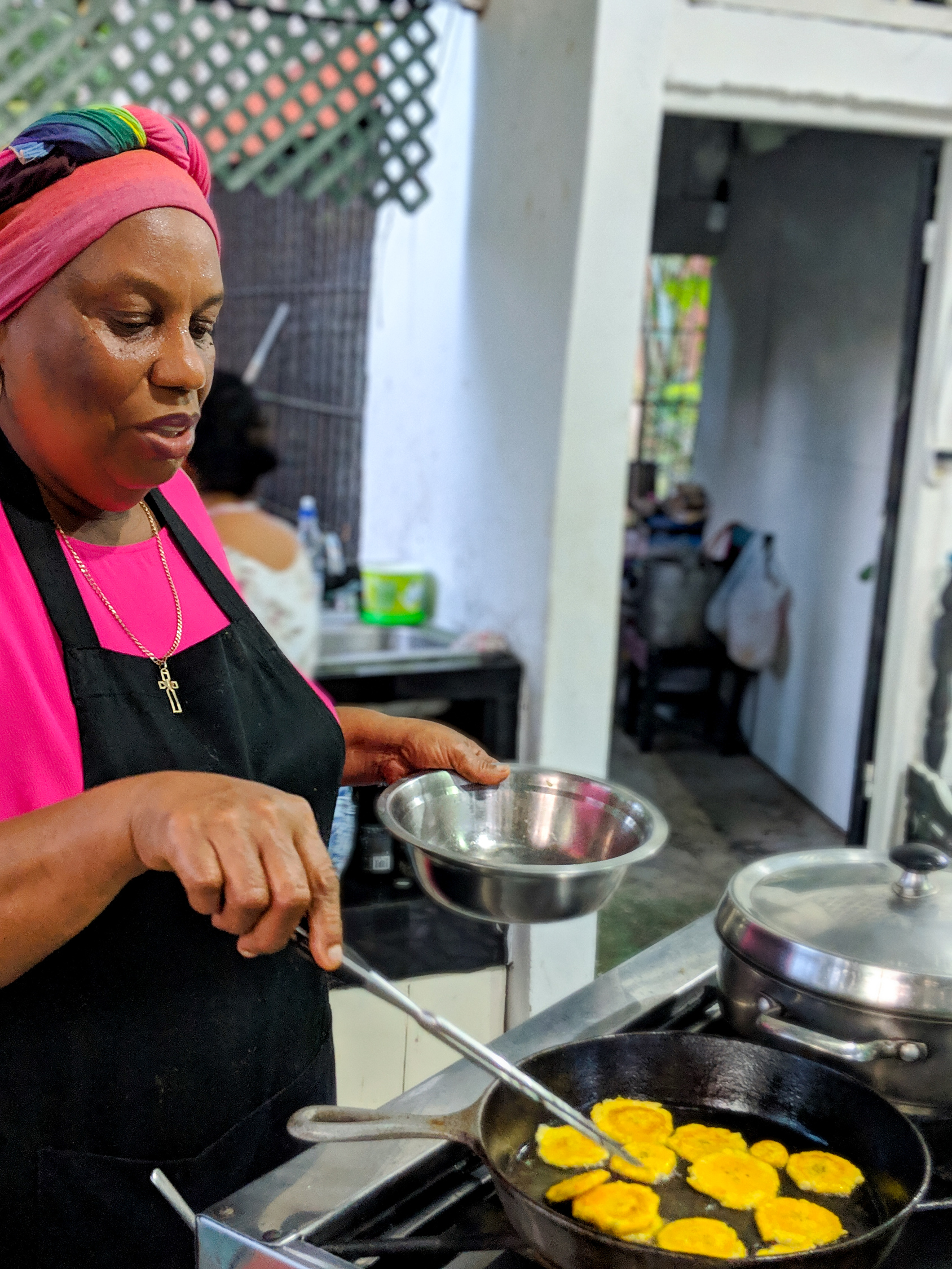 Unfortunately it wasn’t available on our visit but they did offer to host us for a cooking class with Elena at her home.

It was our first day and ended up being one of our favourite experiences.

Elena once owned a restaurant in Puerto Viejo but as she’s now 70 she’s decided to settle down, but only a little. For the last eight years she has been teaching cooking classes.

In the last five years she’s focused most of her energy teaching local kids how to cook because, like everywhere else in the world, in Costa Rica it’s not a skill parents are passing on.

She spends her time also going to community meetings reminding parents that if they are cooking they should have their children in the kitchen with them.

This was more of a demo class than a hands-on cooking class. Elena explained she made some of the things beforehand so people didn’t grow tired of cooking after two hours.

It also meant we had more time to talk to her about the town, and of course I wanted to know where to eat in Puerto Viejo.

The great thing about Elena is that she doesn’t mince words, and is honest about the situation with restaurants in Puerto Viejo.

Almost all of them are foreign owned. Few locals were cooking Costa Rican food in restaurants.

We later saw that this was an understatement. We avoided northern Costa Rica because we thought we would avoid the tourist traps.

But it seems over recent years traditional sodas have been replaced with yoga studios, hipster clothing joints, vegan and gluten-free cafes and others offering burritos and dollar shots.

Even more reason to eat Elena’s Tican food. This is a rare opportunity.

In addition to coconut beans and rice, Elena showed us how to make Caribbean chicken, fried plantains aka patacones and a simple salad dressing.

How to Make Coconut Milk From Scratch

As an interactive demo one of the most interesting things was learning the traditional way to make coconut milk.

Elena uses a hammer to open the coconut instead of a machete. She says she “likes her hands and wants to keep them.”

She then showed us how to separate coconut meat from its shell – spoiler…it’s really hard. Rease was pretty good but I struggled, despite Elena’s encouragement that I did a good job – I’m sure that’s what she tells all the kids.

I could barely do it. She also showed us a traditional coconut grater that they once used to make coconut milk.

Today it is simply for decoration. It takes too long and can destroy someone’s hands if they aren’t careful.

While Elena makes everything from scratch I’m going to use canned coconut milk for this recipe. It’s definitely not as good. But it’s also much easier.

How Spicy is Spicy?

There is a very mild spiciness in this rice and beans dish that complements the cool coconut flavour.

This makes it as hot as a habanero and it’s cousin, the scotch bonnet pepper.

However, it is difficult to find in North America. So you may need to look for a scotch bonnet pepper or whatever spicy pepper you can find.

You cannot substitute hot sauce. The recipe uses the pepper whole to get the complexity of the fruitiness AND spiciness of the Panamanian pepper.

If you want to be authentic and use the real deal you can buy these seeds to grow your own.

This Caribbean rice and beans recipe is really flexible.

Elena used a Panamanian pepper. Don’t worry if the idea of putting the equivalent of a whole Scotch bonnet pepper terrifies you.

It’s not as spicy as you think. The pepper is cooked whole because the the seeds which are the spiciest part of a pepper.

Elena says even though the Panamanian pepper is 18 times hotter than a jalapeño pepper, it is perfectly acceptable for the timid cook to start with a jalapeño.

But really trust me, it’s not a spicy dish.

This recipe also uses red beans. Feel free to use what you have on hand such as black beans, kidney beans or pigeon peas.

What to Serve Caribbean Rice and Beans With

We ate this dish with Costa Rican Caribbean chicken, patacones and salad. It’s a great side dish for lots of fish and various meats.

Pin it: Coconut Beans and Rice