Learning Ecuadorian slang has been one of my biggest challenges in Ecuador. Thankfully I’ve been picking up more and more in Cuenca.

As I learn more Spanish I see that it’s not so much about picking up proper tenses and verbs but understanding how the locals speak.

In Colombia I felt like I had progressed ten-fold when I finally understood the colombian slang words I could not find in my dictionary.

In Ecuador I’m picking up more nuances and while many of these words are not unique to Ecuador, there are some things you should know.

The Beginner’s Guide to Ecuadorian Slang 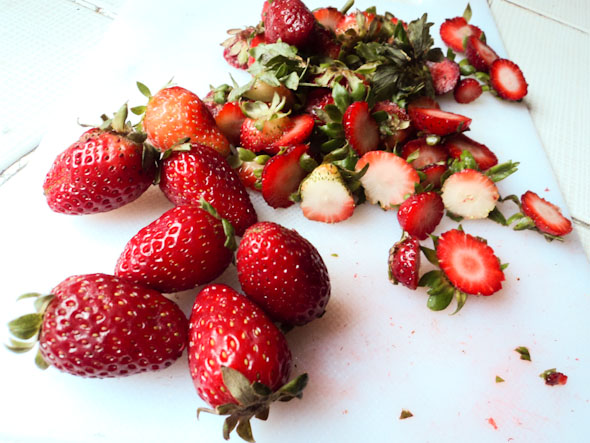 One of the first things I noticed was that my strawberry yogurt was no longer called fraisa but now frutilla.

Turns out the story is a bit more complicated than a simple word swap.

In Ecuador frutilla are considered the native strawberry. But even Ecuador isn’t immune to massive globalization and fraisa is now being used to describe the monster strawberries we’ve grown accustomed to.

So even if you forget to use frutilla, the ladies at the market will know you want strawberries.

I had heard this many times and wondered why the girl at the tienda was telling me I was very friendly. Turns out it is also used as an expression to mean much appreciated.

This is one of my favourite because, like most gringos, I’m trying to be polite as possible which means saying gracias upwards of 50 times a day. I’ve been told to stop doing that.

But now when the bus driver helps me put my backpack on or someone gives me directions, I’ve learned that muy amable is the way to politely say thanks.

This is used throughout many Latin American countries when speaking with older women.

However, you need to be a bit careful in Ecuador as it is not a synonym for señora.

Doña is used to politely address the woman at the fruit market but you would not use this to address others.

I heard some people who had traveled from Argentina addressed the hostel owner as doña. Unfortunately in their effort to be polite they were actually offending her.

Social status and class is still very much part of Ecuadorian society. Vocabulary among Ecuadorians often signals as to what social class an individual is from.

Just as in English words often identify your upbringing and education.

THE MOST UNDERRATED CITY IN THE ANDES:
Loja Ecuador

This is really tricky ground as every country has its own definition. In some countries only little girls are señoritas but in other cases, such as Ecuador it reflects your marital or civility.

So one day an elderly lady may call me señorita but if I’m eating lunch with a male companion I become señora.

When in doubt, use señora as a sign of respect.

And finally when you’re just hanging out having some drinks these Ecuadorian slang phrases may help:

Chuta – damn, shoot
Esta pleno – it’s fine
Buenaso – really good
Chachos – jokes
Estoy limpia – literally I’m clean but here I’m broke (Coastal slang)
Farra – party
Me ves la cara de gringa? – I have the face of a gringo? a.k.a  Are you trying to rip me off?
Andate a la verga – Get the hell out
Buena carne –  Good meat, used to describe someone you’re attracted to (Coastal slang)
and my favourite…
Huevada – bullshit

Ecuadorians are very forgiving to foreigners

So if you forget to formally address someone as usted and use tu or use a word that doesn’t reflect their social status they will attribute it to your novice Spanish rather than a personal insult.

But it’s always good to learn how things should be done properly as it will reward you in kind.

What about you? What Ecuadorian slang words have you learned that made you feel like you fit in a bit more?