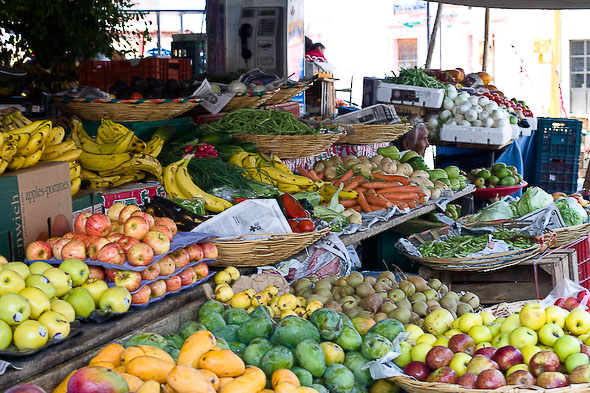 There is so much Mexican fruit that I had never tried before I visited. There are a million different kinds of mangoes here and everything is served with at least one lime.

Oaxaca should mean land of tropical fruit because you can’t walk a block without chili-topped sweetness.

But I’ve been in Mexico a month and learned there are also many fruit I have never seen so I gathered the courage to go to Le Merced market to buy a bunch.

I wanted to try to talk to the vendors to learn how to eat them.

More commonly known as guava fruit and while I’ve had the martini and fruit juices I’ve never had one whole.

Guavas have a firm texture like a pear but taste similar to a tart mango. They are perfect for road trips as they don’t seem to bruise easily.

Known as jocote in English although I’ve never heard of either.

The size of a kiwi, they taste similar to a nectarine with hints of sweet apple but like every fruit, can be eaten unripe with salt.

Also known as sapodilla and it doesn’t look like much. If it hadn’t been for the woman at the market I would have thought it was a potato.

ALSO READ: 21 Exotic Fruits to Try Around the World

When I ate it I knew I had tasted the spicy, gingery fruit before and after a quick wikipedia search I realized it was a berry.

This is also a common Filipino food native to the Philippines so it’s likely that I ate it 10 years ago.

The trees only bloom twice a year and the berries are amazing.

Native to the mountains and was very peculiar. While it looks like an orange pear, when you pick it up it feels hollow.

It’s similar to the sweet tasting passion fruit; the pulp is full of hard seeds blackish, surrounded by a gelatinous coating.

I’ve since learned the translation into English is pomegranate snot/mucus – not really the most appetizing fruit after all.

The gratifying thing about learning about all of the different fruit in Mexico was that I did it in Spanish.

I couldn’t understand everything but I think I’ve graduated from responding with the equivalent of a toddler’s Spanish to that of a pre-schooler.

« Have you met Whatsherface?
Where to Eat in Oaxaca? »