These Honduran drinks are a fun bucket list to achieve when traveling Honduras.

One of the things I loved traveling overland through Central America was how food and drink evolved from north to south. Some drinks and juices would be the same, evolve slightly and new ones would appear.

Now after visiting more much of the Caribbean I can appreciate Honduran drinks and food so much more,

In Honduras drink and food reflects its culture and history. Like much of Latin America it has deep influences from Spanish colonialism but is also heavily influenced by the Caribbean culture on the coast.

But it’s much more than beautiful Caribbean beaches and Spanish food.

It also has a very important influence of immigrants from Africa and and the indigenous Lenca population, which exists in Honduras and El Salvador.

Honduras isn’t just a country to pass through. But let’s get to the most common question:

Can You Drink the Water in Honduras?

It’s advisable to avoid drinking tap water in Honduras. The first time I traveled through I used this Steripen and it was fantastic.

Since then I now travel with a Lifestraw Water Bottle and I’m looking at a Grayl bottle, which other travel bloggers rave about.

If you can’t find bottled water there are lots of local soft drinks with fun flavours like Tropical, which is a banana drink and Refresco de Nance, which is a common Honduras fruit and Costa Rican fruit where it’s also called nanzi.

It is a traditional drink made with ground maize (corn) mixed with cocoa, agave or honey and cinnamon, vanilla and a variety of spices. But everyone has their own recipe and pinol recipes can vary widely.

Pinol is an ancient drink that comes from the Nahuatl word pinolli, which means cornmeal.

It’s often compared to a thinner oatmeal and is considered a hearty and nourishing drink.

It is still made today, often ground with a mortar and pestle in rural areas. In urban areas it’s more common to just buy the ground powder and add water. 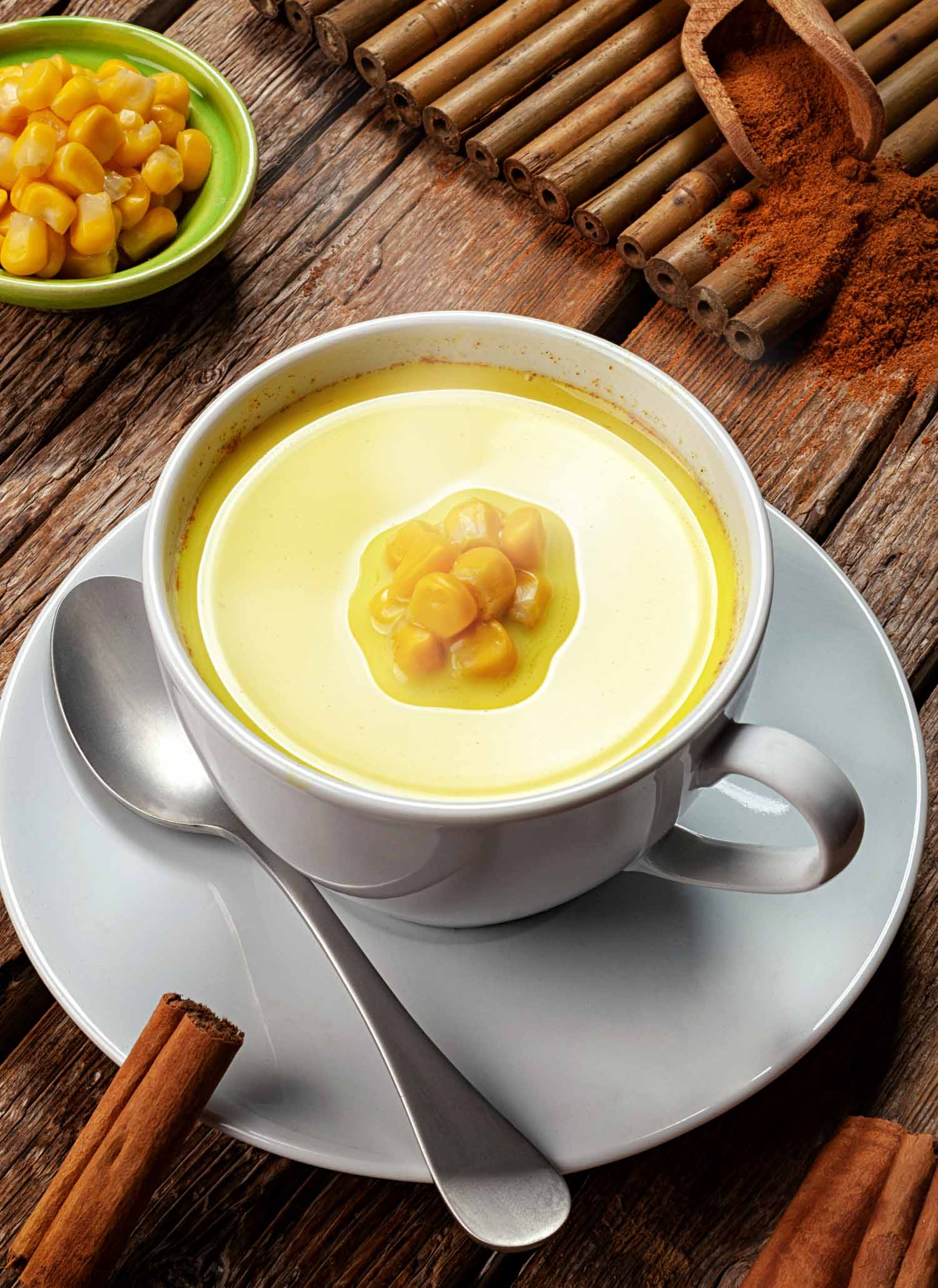 If you’ve spent any time in Latin America you’ll recognize atol de elote. It’s one of the more common traditional drinks in Mexico and that’s because it comes from ancient Mayans.

In other areas it may simply be called atole and may be a rice drink or made with wheat. But this Honduras drink is made with maize or elote, which is corn.

It’s a warm sweet drink in Honduras made from pureed corn mixed with sugar, cinnamon and spices.

It can be served at breakfast, is popular to buy late afternoon from street vendors and is sometimes it’s served cold as a dessert.

One of the most famous Honduran drinks, coffee here is exceptional

Honduran coffee was once used as a blend but now is considered one of the best in the world. Like Cuban coffee, it is primarily Arabica beans.

There are also six varieties, the Lempira being the smallest and most difficult to find. It was once ranked the best coffee in the world so almost all of it is exported.

Like most coffee in Latin America it is almost always served black with far more sugar than you would expect. So you may want to order your sugar on the side if possible.

Although the Spanish colonialists brought horchata to Latin America, the horchata recipe in Honduras can be quite different.

In Mexico and neighbouring Guatemala it is a rice drink mixed with sugar, vanilla, cinnamon and other spices.

Instead horchata is made with morro or jicaro seeds along with milk and sugar.  It is also common to find it made with sesame seeds, cashew nuts and almonds.

One of the most popular Colombian drinks, this is sugar cane juice!

It is called guarapo in Cuba and Colombia, where street vendors also have the entire pressing machine on site.

If you like they’ll serve you a freshly squeezed glass of sweet sugar cane juice.

Not surprisingly, it’s pretty sweet. I think it’s best to get the smallest size possible or to bring some extra water to mix into it.

Translating to salad water, it uses seasonal fruit to basically make what we know as a fruit salad into a drink.

It’s also a very common drink in El Salvador where is often called refresco de ensalada. Think of it like a non-alcoholic sangria juice.

It’s like a drink and a snack all in one! 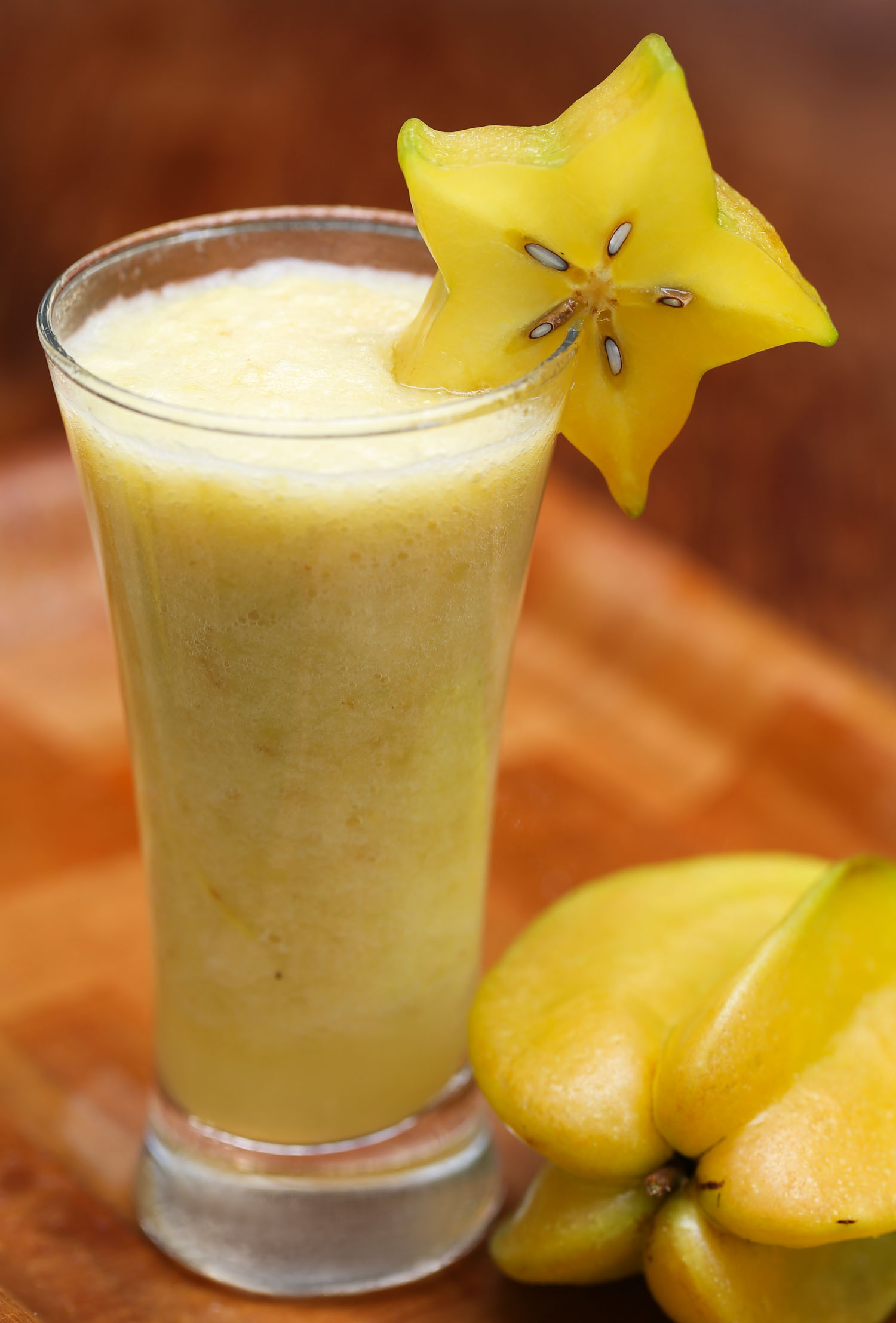 One of my FAVOURITE things about traveling through Latin America is ALL the fruit juice.

Honduran drinks are full of local fruit flavour and there are so many options.

While aguas or refrescos means straight fruit juice mixed with a bit of water and unnecessary sugar, a licuado signifies that the fruit is mixed with milk or yogurt along with ice.

You can get licuados made from one fruit or many. These drinks in Honduras are easy to find in markets and lots of shops will specialize in making licuados.

I always ask that they don’t add honey or sugar in it because they can get pretty sweet.

It looks like a milk shake but it has no milk!

Batidos are very similar to licuados but do not include milk. Instead they are fruit mixed with oats, wheat germ and sometimes granola along with ice.

They have that creamy smoothie consistency but are dairy free, which is perfect for vegan travelers or people who want to try something different.

Because of the oats and other options I think it’s great breakfast option as it’s quite filling.

This is very different than batidos, which are popular Brazilian drinks but often include alcohol.

One of the most refreshing Honduran drinks, local beer tends to be what you get in other Central American countries with light lagers and German-influenced flavours.

There are four main beer brands in Honduras:

And they are all brewed by one company – Cerveceria Hondureña. Who also happen to own Coca-Cola and a bunch of other popular drinks in Honduras.

But craft beer lovers need not dismay! Ten years ago some craft breweries started popping up:

Other Craft Beer in Honduras

Chicha is a common drink throughout pre-Colombian America (Central and South America) and has been made for centuries.

It is a fermented alcoholic or non alcoholic drink in many Latin American countries, often prepared for holidays like Christmas and Easter.

The most commonly known chicha is the Peruvian drink chicha morada, which is made from purple corn.

Chicha is made by fermenting maize or yuca, often adding honey to help fermentation. This popular Honduran drink may have other fruits added to it.

Both the nance fruit and pineapple are common in Honduras to made chicha de piña or chicha de nance.

Coyol wine is made in regions from southern Mexico down through to Costa Rica. It is made by fermenting the sap of coyol palms.

Vino de coyol is also known as chicha de coyol, the tree is cut down to drain the sap, which ferments in the sun for up to a week.

In Honduras small shops sell bottles of coyol wine and some street vendors in rural areas will sell it in recycled plastic water and soda bottles.

It’s a cloudy drink in Honduras and doesn’t look like wine at all but more like a moonshine. While it has a low alcohol content, people tend to drink a lot of it. Hangovers from vino de coyol are brutal so go easy on it.

There’s a lot of folklore attached to it, some day if you drink it one day and spend the next day in the sun you’ll be drunk again from the sun.

A Latin American country, Honduras has substantial Caribbean influence, especially from the Garifuna culture, which originated from St. Vincent island in the Caribbean.

It’s a long and complicated history, but the French and English battled for the islands and the Garifuna people were unwilling casualties in the battle of land which belonged to them.

Eventually in the late 1700s the British shipped Garifuna people with darker skin to Roatán island.

Today there are descendants in Belize, Guatemala, Mexico, Nicaragua and many moved to the United States.

If you can only have one Honduran drink on your visit it should be guifiti, also known as giffity, giffidy and geffidee.

This iconic Honduras liquor is a firey blend of medicinal herbs, botanicals and spices and may have local honey.

It is made both commercially and at home with up to forty ingredients so recipes vary.

But this Garifuna liquor often includes chamomile, anise, all-spice, cloves, garlic and guaro that is fermented in sunshine for up to eight days.

It is a traditional drink that is believed to be a medicine for a number of ailments. You can find it at festivals and Garifuna bars along the coast.

Also known as aguardiente in South America, guaro is distilled sugar cane and in the rum family.

It’s a clear liquid that is the national drink in Costa Rica and can be shot straight or used as a mixer, similar to any other spirit.

It has a slightly sweet taste and lower alcohol content (30%) than vodka is often replaces it in typical vodka drinks.

Known as as rompope in Mexico and crema de vie in Cuba, it is essentially eggnog.

This Honduran drink is made during Christmas in Honduras and may be served with guaro, rum or made without alcohol.

It’s believed that the recipe is directly from a convent in Puebla, Mexico.

This hot pineapple punch is also common during festivals and important celebrations.

It reminds me of canelazo, an Ecuadorian drink with sugarcane, fruit and aguardiente.

But really is more like a warm piña colada punch.

This Honduran drink is made with pineapple, light rum, cinnamon, cloves, all spice, sugar and coconut milk. It’s not commonly sold all year round unless it is a special occasion. 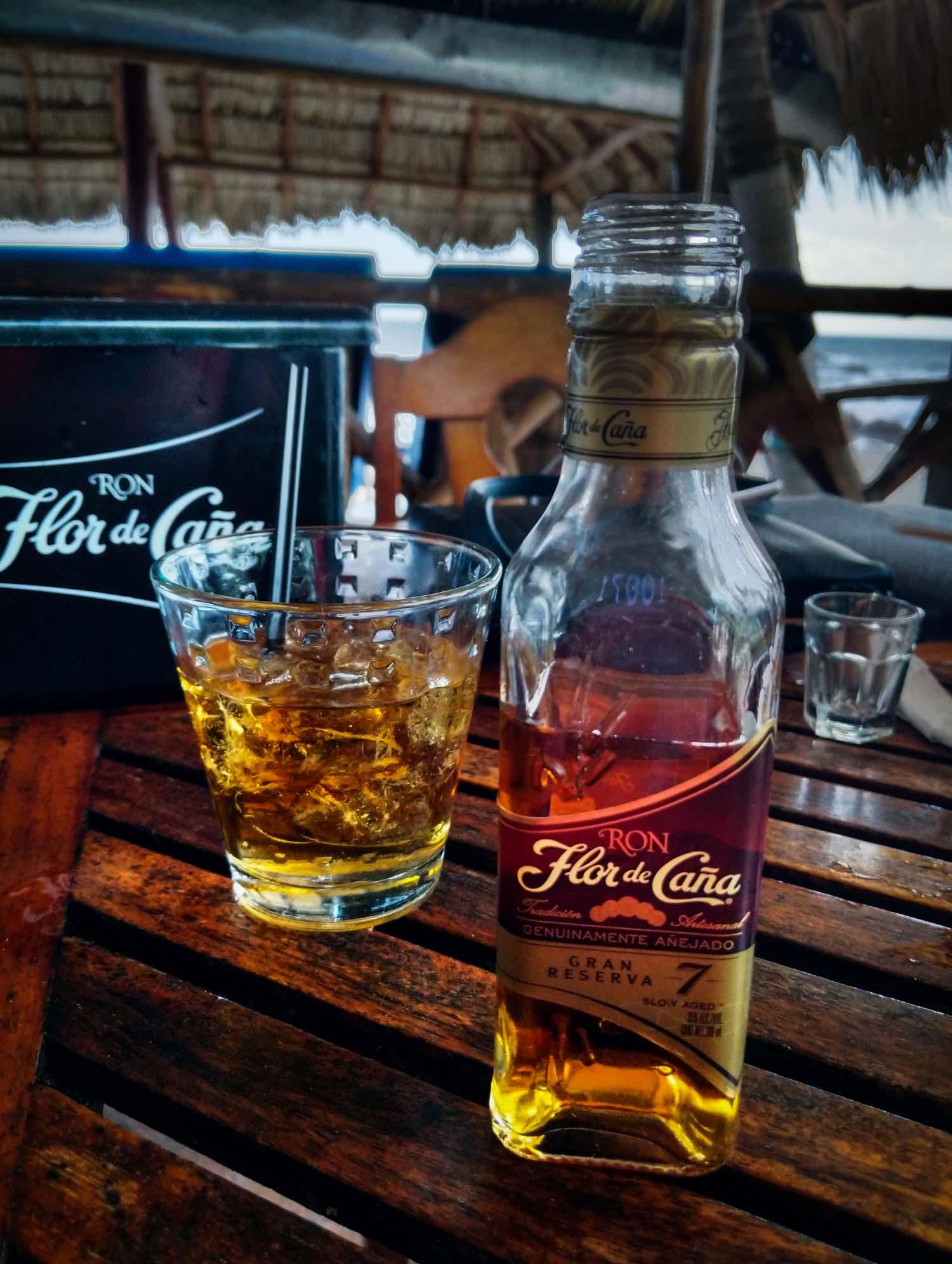 Flor de Caña is known as a Nicaraguan rum, but its secondary distillery has been in Honduras for decades.

Its name means sugarcane flower and it is the rum of choice across Honduras for both cocktails and drinking straight.

If you’re looking for a 100% Honduran rum check out the Roatán Rum Company or Pirates Grog Rum both on Roatán island.

It is absolutely impossible to visit Roatán island without seeing this Honduran drink on any menu.

This cocktail is named after the lizard that is found all over the island that locals call Monkey La-la and the Jesus Lizard because it can walk on water before eventually sinking.

40+ BEST:  Cocktails Around the World

That’s what this Honduran cocktail will do to you. You have a few thinking you are ok and then you’re done for the day.

There is no singular Monkey La La recipe as every bar makes it differently. It is a base of piña colada with more sugar and a bunch of alcohol blended with ice. Generally it includes:

Pin it: Drinks in Honduras