These Honduran desserts will make you want to jump on a flight to Honduras.

When people describe world class cuisine they often forget Latin America. Sure Mexico gets rave reviews but then it seems like everything else is forgettable until you get to Peruvian food.

I’ve heard more than a few people say that food in Honduras isn’t that special.

But I think the real issue is that they expect all of Central America to taste like Mexico.

But Honduras has a different history from Mexico. Yes it was colonized by the Spanish, but it is also heavily influenced with Garifuna cuisine, something you won’t really see in Mexico (more on that below) and Caribbean culture.

So a Honduran dessert you see on this list may also be found in the Dominican Republic, the Philippines, Colombia…and yes some are also found in Mexico.

So instead of thinking Honduras isn’t as spicy or complex as Mexican food, start embracing Honduras.

And Honduras desserts are a great place to start!

As many recipes in Latin America are similar, Honduran recipes are often described as Hondureño or catracho, which means Honduran-style.

Catracho is the nickname for Hondurans, which was given to them by Nicaraguans in the mid-1800s as both countries were fighting American William Walker’s military expeditions.

Honduras’ efforts were led by brothers Florencio and Pedro Xatruch. Nicaraguans called Hondurans initially the “Xatruches,” then catruches, and finally catrachos. More on that here.

Technically a children’s sweet treat, these Honduran desserts are loved by everyone.

Rice pudding may be one of the world’s most famous desserts. It spans around the world from Spanish influence so you’ll find it as one of the most popular Peruvian desserts, Ecuadorian desserts and it’s also a common Filipino food.

Arroz con leche is served a bit differently in Honduras. It is a common Honduran dessert at parties and large gatherings and is prepared as a casserole dish and then spooned out.

Arroz con leche is often served hot but can also be served cold. It gets its sweetness from condensed milk and and is usually topped with cinnamon, nutmeg or cloves.

It may have raisins in it although technically this would be called Arroz con Leche y Pasas,because for some reason you need to warn people that raisins (pasas) are in the dish.

A simple homemade Honduras dessert made with ingredients everyone has in the house. It’s so easy you’ll want to make it at home.

Bananas are sliced in half and put into a baking dish, then topped with butter, brown sugar and cinnamon.

It’s a quick dessert in Honduras, as it only takes 5 minutes in the oven until very ripe bananas brown.

Baked bananas are common in homes throughout Central America and the Caribbean. Recipes can vary, may use a touch of rum or milk and may be topped with cream and shredded coconut.

The first time I saw carrot cake in Honduras I thought the cafe was making gringo food for tourists. But it isn’t the case at all, it really is a traditional dessert in Honduras.

And perhaps it’s not surprising as it uses very common and economical ingredients. Carrot cake in Honduras uses a typical recipe you’d find at home.

However, in areas closer to the coast it may also include coconut flakes.

Brought over by the Spanish, this is another Honduran dessert that is found all over Latin America. They are especially popular during Christmas in Ecuador.

It’s a popular sweet street food with vendors heating large vats of oil to drop in small balls of dough.

It’s basically a doughnut, but you eat them fresh, sprinkled with a bit of sugar. It may be one of the best doughnuts you ever eat.

The name literally translates to coyol fruit in honey, not surprisingly this is also a common sweet Guatemalan food, where the coyol fruit, which come from palm trees, also grow.

The honey is not honey but a syrup made with panela (unrefined sugar cane) and water. Like most Honduras desserts, it also includes cinnamon, cloves and some recipes use other spices like nutmeg.

Coyol en miel is very common during Semana Santa, the holy week leading up to Easter.

A staple dessert in Latin America, flan is made differently depending on the country.

In Honduras, flan is often made similarly to Cuba. However, some home cooks prefer the Mexican-style flan with cream cheese.

On the coastal areas it’s very common to find coconut flan, it’s a must try dessert in Honduras.

Let’s not forget all the amazing fruit in Honduras!

You can find it cut up on the street, sold as fruit salads and offered for dessert.

There are so many types of fruit in Honduras I dedicated a post to just that – you can indulge in a fruit bucket list because it’s healthy.

I also like it because it’s a good reason to talk to locals. Sometimes I arrive in a city and want to know where to find something like guava fruit only to discover that it’s out of season and I’ll have to return.

Honduran oatmeal cake is traditionally gluten-free as it does not use flour.

If someone asked me to suggest the most common sweet Cuban food I would definitely say guava jam.

And as Cuban food and Honduran food have so many similarities in history and cuisine I was not surprised to find it here.

It is very easy to make, boil ripe peeled guava until fruit is soft. Strain them to remove seeds and boil with sugar and lime juice until it has the consistency of jam.

It’s often used on top of desserts or also in pastries.

Honduran desserts are very easy, this is made with lime juice, eggs and condensed milk. In Honduran limes are the big ones we know but key limes.

It’s also a common dessert in Nicaragua, as it’s so easy to make.

Condensed milk and egg is combined until smooth and then lime juice is added and the mixture is put into a pastry shell and baked until firm – about 10 minutes.

This is one of the least healthy Honduras desserts so consider it a special treat.

Good Honduran cooks never throw anything out, and macheteadas is a great example of this. It uses the leftover baleada flour and turns it into something sweet.

It is basically a deep fried pancake then topped with a bit of syrup. It’s oh so good with a coffee.

Simple but delicious coconut bread this is a common dish throughout Latin America on the coast. It’s also very popular in Brazilian cuisine.

It may be made as rolls or a loaf of bread, and sometimes includes shredded coconut on top.

Pan de coco is common on Roatan island with Garifuna women calling out “Pan de Coco” to potential buyers as they balance a pail of coconut bread on their heads.

It’s not too sweet and somewhat similar to the Hawaiian food, Portuguese sweet bread. But Honduran pan de coco includes coconut milk to give it a mild coconut flavour.

It is also made in the Philippines because of its shared Spanish colonial past, and served as a sweet with tea.

However, in Honduras pan de coco is usually served as a roll with a meal or a snack with coffee. 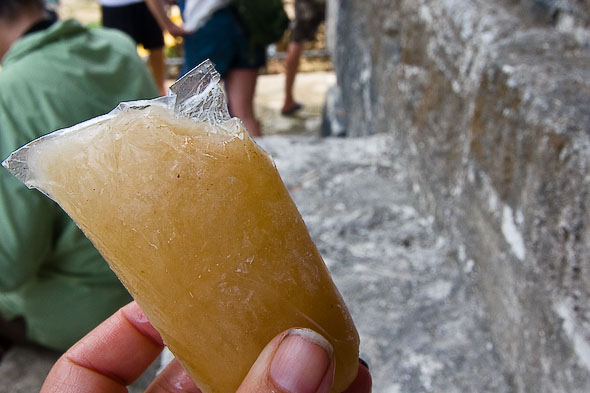 The original Freezies, these sweet treats cost only a few sense and are a great way to cool down.

Simple to make, fruit juice is put into a baggie, tied up and frozen.

PEssentially the Honduran version of popsicles. They are pylon shaped because the fruit juice is put into a cone-like cup (think stryofoam coffee shape) with a popsicle stick.

As they aren’t formal popsicle molds, the stick is never in the centre but off to the side – it can be awkward but just go with it.

Like Mexican paletas, they are becoming more popular and so some shops use molds. But I have a strange fondness to the awkward ones from street vendors.

Quesadillas in Honduras are not the same as the food in Mexico, instead it’s one of the most popular Honduran desserts at Christmas time.

It is a sweet pound cake made savoury with cheese. It is also commonly eaten in El Salvador.

The type of cheese varies, some modern recipes call for parmesan or Grana Padano, whereas others use local Honduran cheese.

Somewhat like flat skinny donuts but more like a corn based version of Italian biscotti, rosquillas are savoury with cheese but also sweet Honduran snacks.

It is common to eat rosquillas for breakfast, often dunking in coffee.

The originated in El Viejo Nicaragua, an area known for sugar cane production and close to the border with Honduras.

Similar on concha bread in Mexico, semitas are an afternoon sweet bread to eat with coffee.

It’s about the size of a kaizer roll, but much much sweeter.

Very common in Garifuna cuisine, these coconut milk bars are an easy recipe to make.

Personally I think they are best to share as they provide a quick sugar high, but the crash comes quickly too and you’ll need a nap. 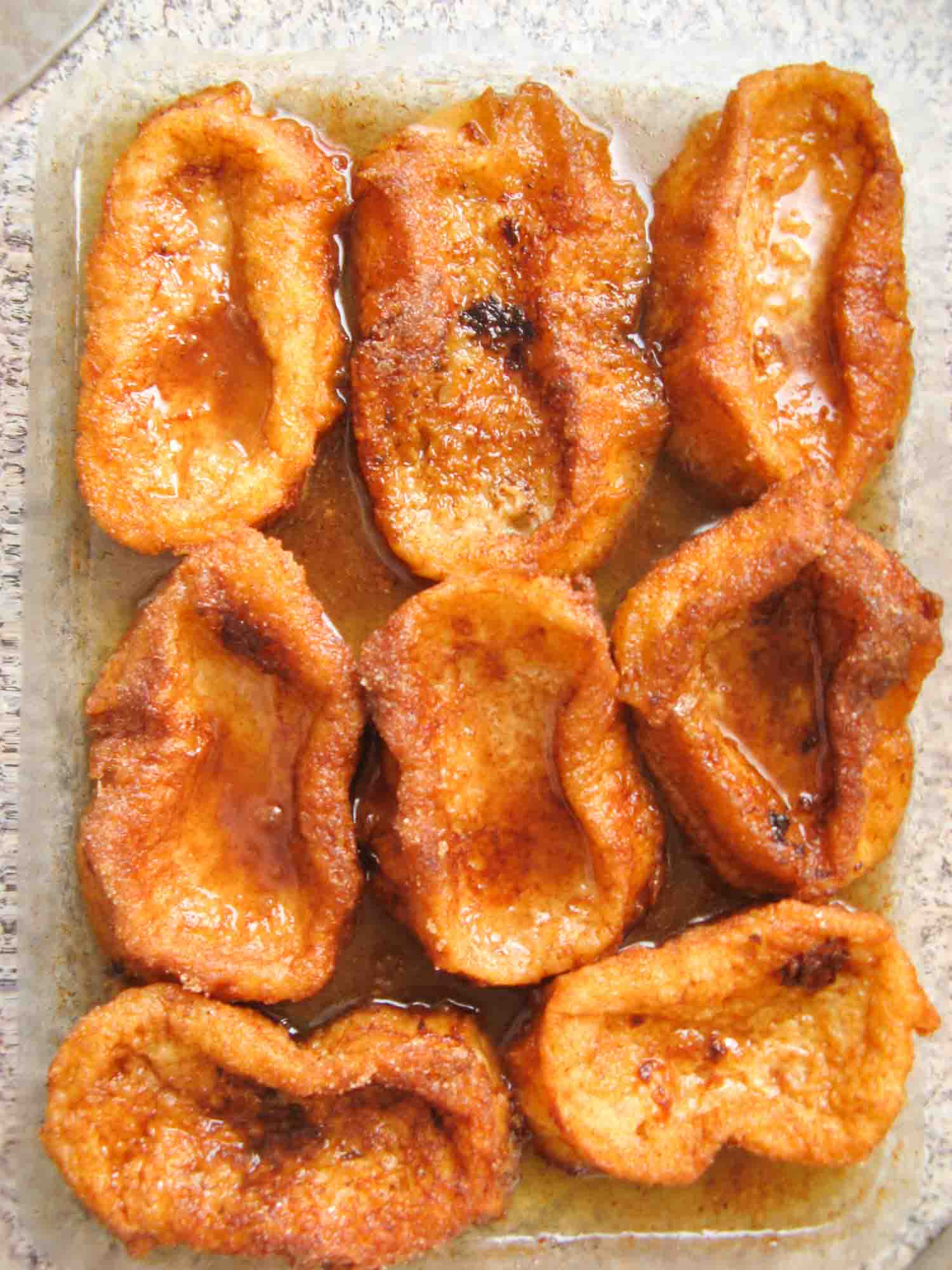 While many people say these are ladyfingers in syrup, I think it’s better to describe it as Honduran-style French toast fingers.

To make them you soak bread or pound cake in a syrup with spices (cinnamon, vanilla etc), dip in egg to fry and drizzle with more syrup.

It is very common to eat torrejas in Honduras for Easter and Christmas.

It can be very polarizing as the cake is soaked in milk and if you didn’t grow up with it then it seems odd to eat a soggy cake.

But this Honduran dessert is so popular you can find it throughout Latin America as a standard dessert in restaurants.

In Honduras tres leches it is often topped with whipped cream and a bit of coconut.

Yucca or yuca is also known as cassava in English and is a very common root vegetables in Latin America and the Caribbean because it grows so easily in all soil.

In Honduras it’s a staple crop so it appears in many Honduras desserts.

Honduran Yucca Cake is made with grated yucca and looks like a crustless pumpkin pie and has similar spices.
Because of the yucca it is a very dense cake and often has a sweetened condensed milk sauce poured on top.

You definitely need to leave room for dessert if you want to tackle this beast.