Lohikeitto is a creamy Finnish salmon soup with a rich but delicate flavour.

Also known as laxsoppa in Sweden, I first tried Finnish salmon soup while in Porvoo, Finland. I was crazy enough to visit Finland in the winter.

I’m Canadian so the weather in Finland is exactly the same as Canada so it wasn’t so bad.

And it was an amazing adventure, locals showed me the Kallio neighbourhood in Helsinki, where you can find the cheapest drinks.

I bared it all in one of the oldest Finnish saunas, and somehow I decided to be brave enough to leave a sauna and jump in a winter lake in Tampere – here’s a video with my winter swimming.

But one of the best days was hanging out with Kaisa and her friends in Porvoo.

It’s a small city less than an hour outside Helsinki and while tourists flock there in the summer, it’s not common to see them in the summer.

Kaisa invited me over to lunch and I spent the day getting to know her friends. It was a really special time. We also cooked together…well she cooked, I watched.

But she made lohikeitto for lunch, a traditional Finnish salmon soup.

It reminded me a lot of home as I grew up in the Maritimes eating cream-based chowders and soups.

And although it’s been years since I have seen Kaisa and her friends.

I remember that day, and the soup like it was last week.

One of my Finnish friends in Canada told me that Finnish people were standoffish, but I found it quite the opposite. 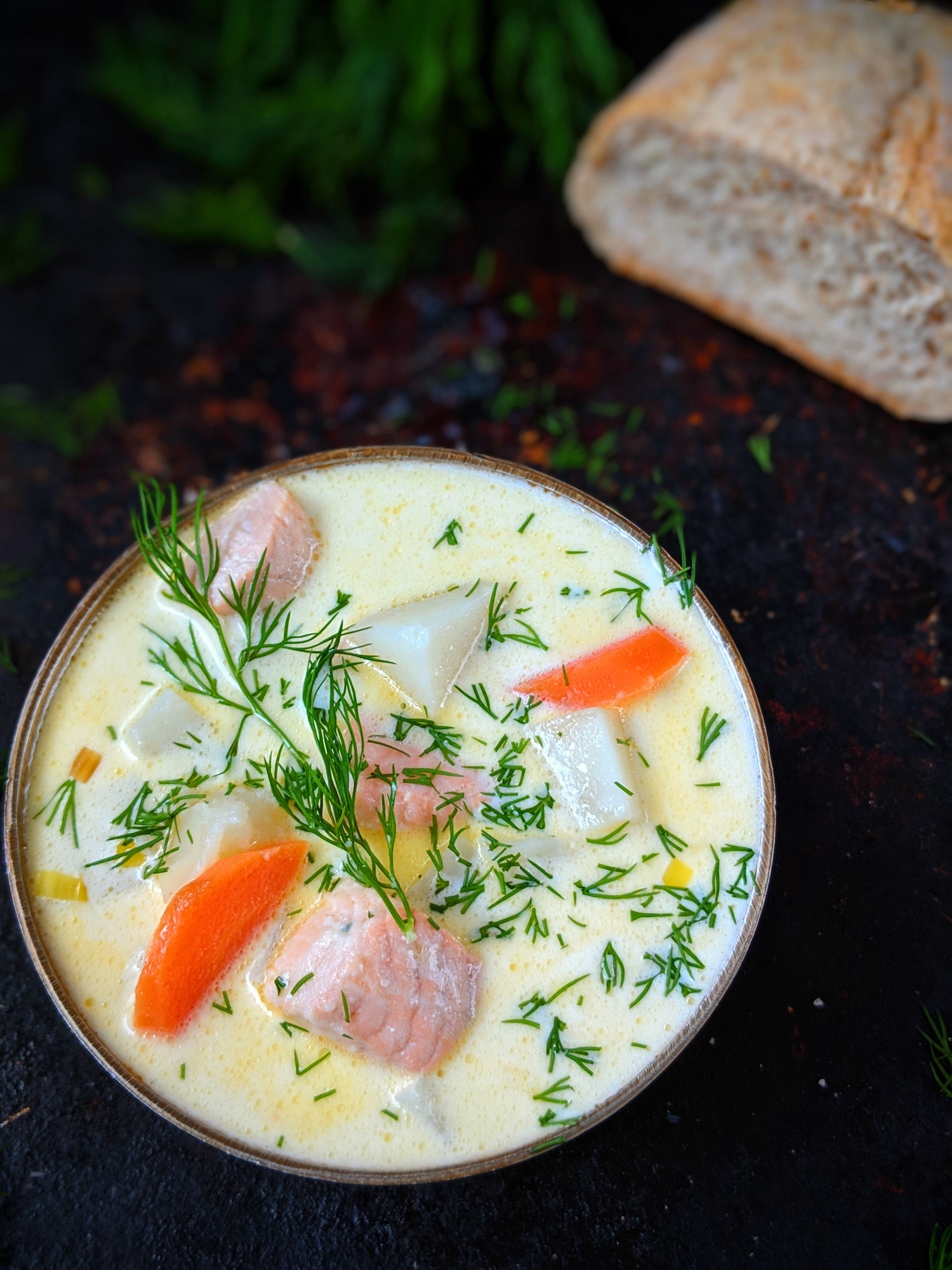 What is Nordic Food?

Canada never gets any praise for its gastronomy.

True, we’re not sexy Scandinavians, but we are also a nordic, or northern country. And when I read recipes for nordic food I almost always think of a similar Canadian dish.

We also needed to pickle and preserve fish, meat and berries in the warm months to survive the cold ones.

While Finland is famous for reindeer, Canadians have great caribou and our venison is amazing.

But Canada is so big that we can never really agree on the identity of our national cuisine.

It once meant you were likely to get burgers or pizza.

So I love reading Nordic cookbooks like Scandinavian Comfort cookbook for inspiration. I want to eat everything in the Fire + Ice cookbook.

They remind me that sometimes they best recipes are the ones we’ve been making for generations.

What Kind of Salmon is Best?

I used wild pink salmon in this recipe.

There are few things that I will not eat as long as they aren’t endangered species.

However, as a rule I try not to eat Atlantic salmon. It is a species that has been over farmed for so many years because as consumers we want cheap food.

The demand was so high Atlantic salmon farming was introduced to the Pacific Coast and some escaped pens and now they exist on both coasts.

But this is bad as their presence has harmed the wild salmon population with their diseases. In fact they were once so diseased they farms used antibiotics on them.

Although antibiotic usage has decreased I’d still rather not eat Atlantic salmon.

In a perfect world, I’d make this dish with rainbow trout. A freshwater fish that is sustainably farmed. It has the pink flesh that makes this dish beautiful.

Getting technical the name for this dish becomes Kalakeitto which is a more generic fish soup, not specifically salmon.

Do I Really Need to Use Fish Stock?

I see many fish soup recipes call for fish stock. Growing up in a Maritime province I never saw anyone use a fish stock.

Later moving to Toronto I found stock in fish markets and it was always so expensive.

Here are four options for this soup:

How to Make Lohikeitto Healthier

While most of the ingredients in this Finnish salmon soup are healthy, wild salmon has lots of good fat and is good to eat. However, it becomes a bit calorie dense as it requires a cup of cream.

If you want to lighten up Lohikeitto you can use milk in place of cream., But you cannot use 1% or skim milk. Homogenous milk at 2% milk fat is the lowest you can go.

Otherwise the milk will split.

Technically at 2% milk fat you should be able to freeze this creamy soup. But I’ve never had the opportunity to do so as everyone eats it. 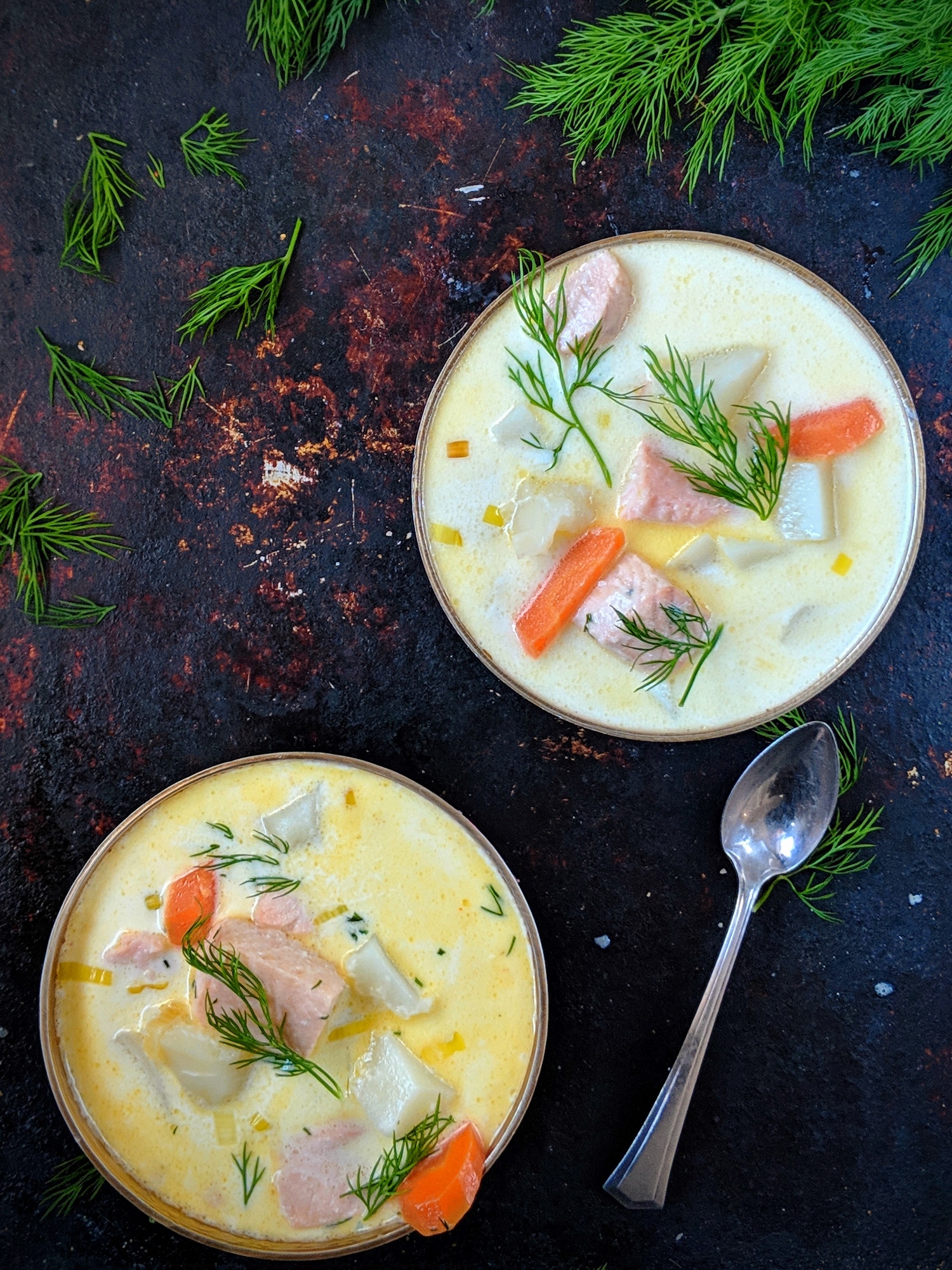 I could not believe how creamy and rich this Finnish salmon soup could be with only 7 ingredients.

I do think it gets better with time so make a big batch and so you can also eat some the next day.

Variations of the Lohikeitto Recipe