I have spent SO much time in Playa del Carmen over the past few years. There’s been rapid development but despite growth it still has all its great street food options along with new Playa del Carmen restaurants.

It has all the things you want to make for a great sun holiday with so many things I love about Mexico. As a solo female traveler I’ve never felt unsafe in Playa.

I prefer Playa del Carmen over Cancun. Neither are century old towns in the Mayan Riviera like Valladolid, Merida or Felipe Carrillo Puerto.

In fact it was only a few decades ago that Playa was basically a jungle. But the beach is beautiful so it started with clearing land for two small streets in town. And now it’s one of the biggest tourist destinations for Canadians.

The one distinction between Cancun and Playa del Carmen is how they were formed. Cancun has a hotel zone where all of the resorts are guarded in an area specifically for tourists.

All of the restaurants, clubs and fake market are for tourists.

To get into Cancun, the city where people live, you need to take a bus. It’s not handy.

But in Playa the hotels are in town. So if you stay in a resort on the beach you just exit. Quinta Avenida (Fifth avenue) has the same tourist junk as Cancun.

And as Playa was a city that was created in the last 5 decades you have a lot of people from all over Mexico.

That means there are Playa del Carmen restaurants featuring food from Mazatlan, Sinaloa and so many other regions. Below are my favourite restaurants in Playa del Carmen at a variety of price levels from budget level taco carts to more upscale options.

All of these are within walking distance in town, and with an exception of a couple they are below the highway. Because I really don’t want to drive anywhere for food! This was one of the first Playa del Carmen restaurants I visited way back in 2012. It was the original location in Playa. Today they have three locations as well as in other cities.

An open air restaurant under a large palapa, this a modern Mexican restaurant with riffs on traditional Mexican antojitos with favourites like shrimp tacos, tostadas, ceviches, cocteles and of course aguachiles.

Dishes are so colourful, light and tasty. You cannot go wrong with the shrimp tacos. And be sure to try all of the various sauces on the table.

Food prices are reasonable for food but be careful with the cocktails as it’s easy to rack up a large bill if you have more than a few.

Menus are available in both English and Spanish. Most wait staff speak excellent English. 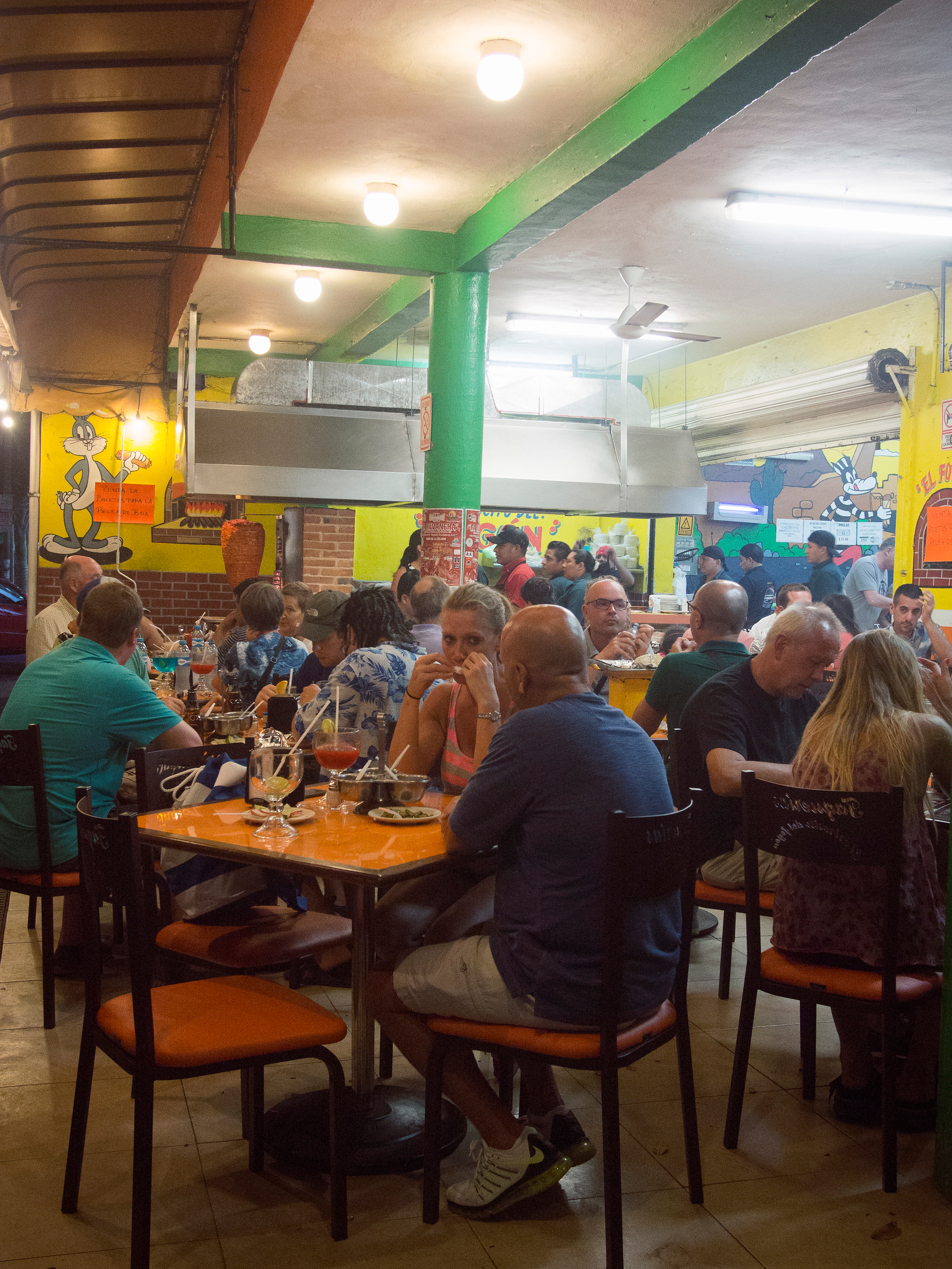 My secret litmus test if I’m going to trust someone’s recommendations for Playa del Carmen restaurants is their opinion on El Fogon.

No doubt they are the most popular taco restaurant in Playa del Carmen. But I have no idea why this is.

They have three locations in Playa and they are always busy. Known for their al pastor and tourists wait in lines – long lines. Just to eat here.

So if you tell me it’s the best I’m going to assume you also think steak in Argentina is the best. Because you don’t want to admit it’s all hype.

But If there’s no line you should definitely pop in. I’ve been a few times and the pastor is fine. But it’s not even the best I’ve had in Playa.

I thought I was crazy but I have asked a few street vendors their thoughts and everyone seems to agree that they are good but not the best.

They open at 6pm so if you eat early it’s a great spot as there is no line. But if there’s a line I have some other options for you that are just as good. 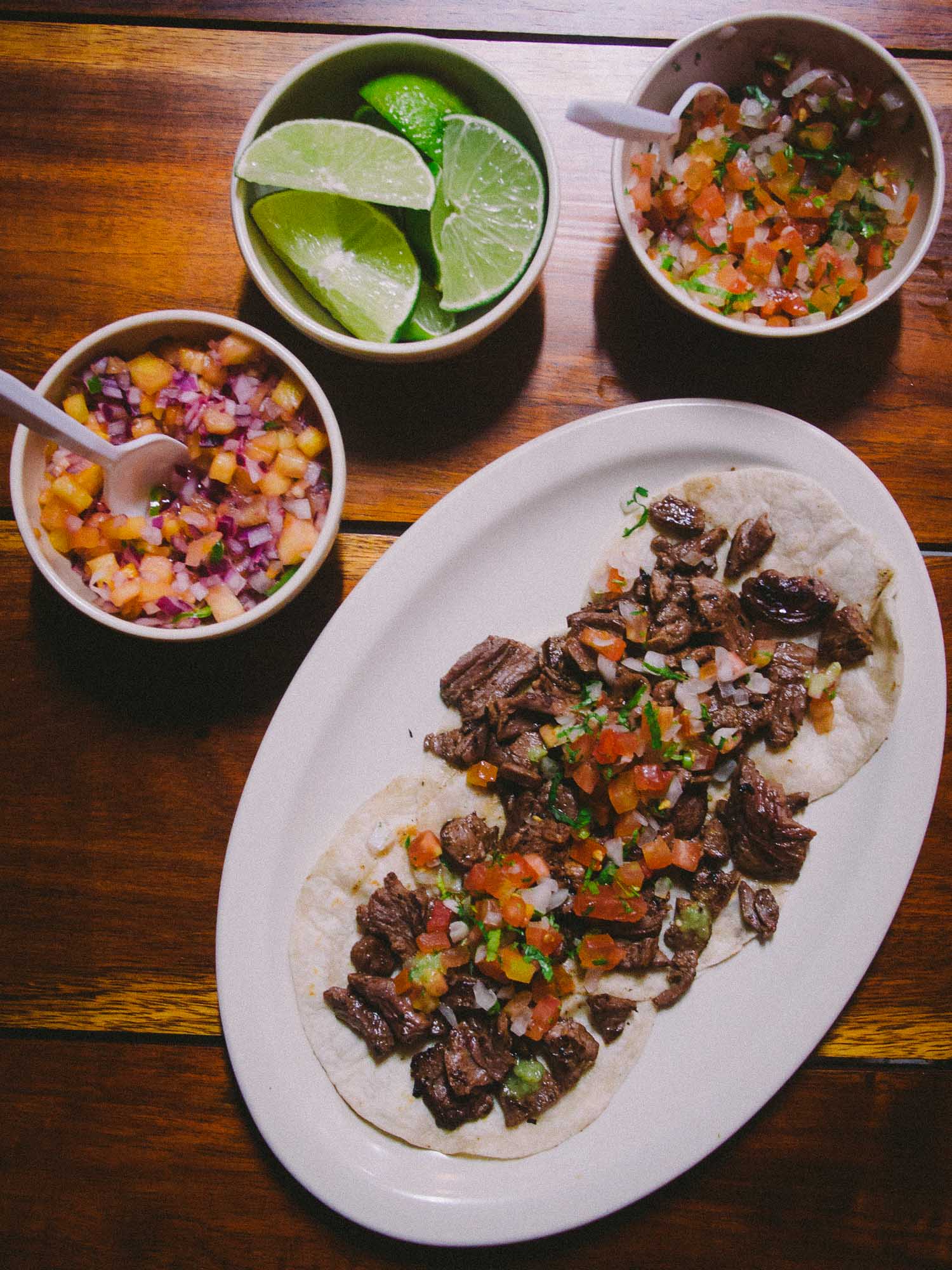 The other, newer taco restaurant in Playa del Carmen. People debate whether it’s the best or El Fogon.

Like El Fogon it also has three locations. In fact, they are often a few storefronts away from each other.

But don’t worry they also have al pastor if you want to compare.

I prefer Don Sirloin. I’ve taken people from one spot to the other and everyone preferred it as well. The tipping point may be one important thing…pineapple jalapeno salsa.

It makes everything so bright and spicy…but not too spicy.

Tacos are so cheap you can judge for yourself. If you do, let me know in the comments below which one you liked best!

Of the three locations I like the one on Calle 38 best because they have outdoor seating in the back. The others are open air concept 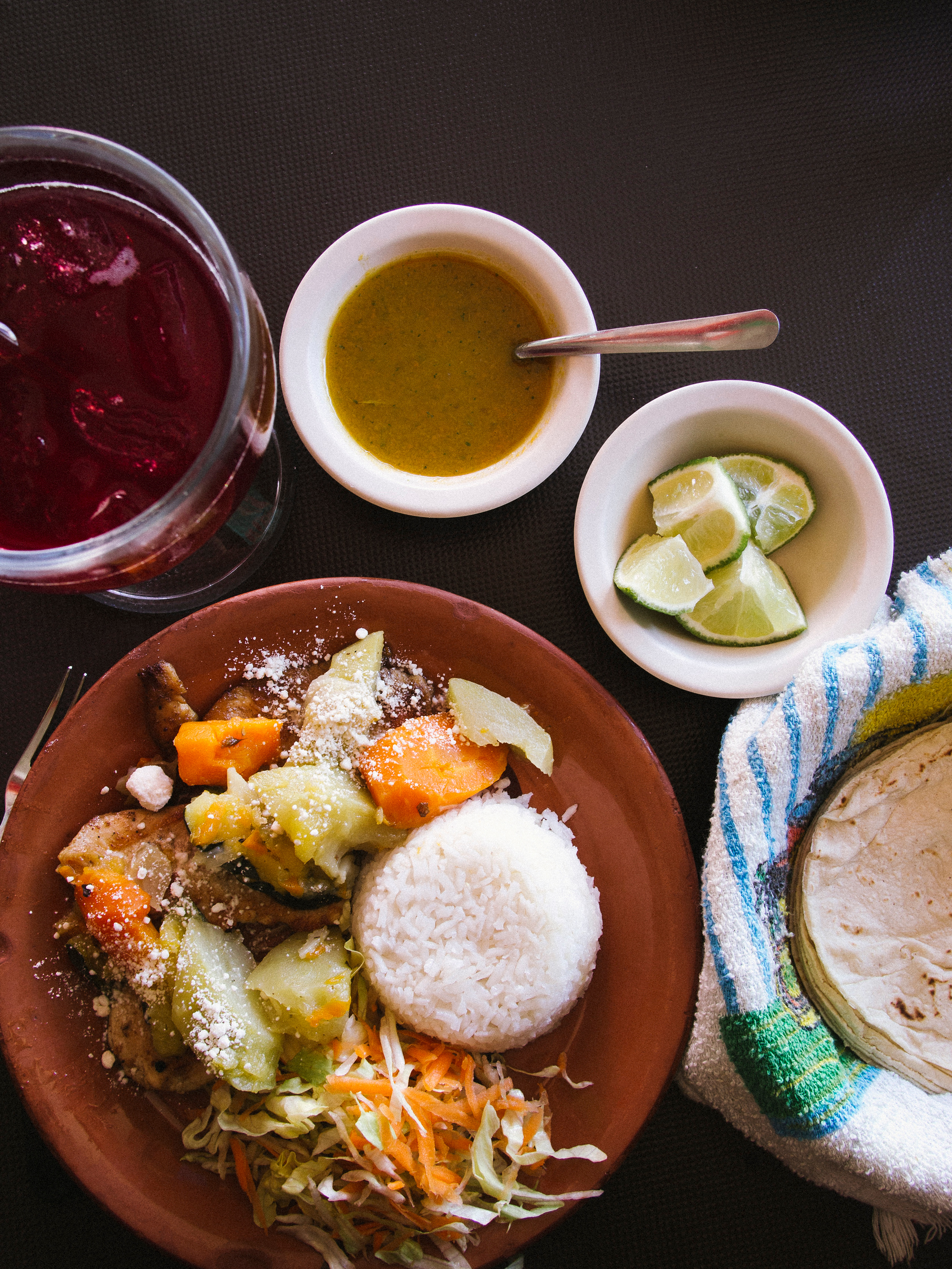 I’ve eaten here for lunch more than anywhere else in Playa because it’s just good home cooking at an amazing price.

If you’re on a budget in Mexico the comida casera is your best friend.

Also called comida corrida or menu del dia. It is a set menu that usually includes a soup, agua fresca (drink) and hot plate for only a few dollars.

I can’t eat a lot at once so I bring a tupperware container with me, put the rice in, top it with the soup broth and whatever I haven’t eaten.

This chicken breast a la plancha with squash, carrots, slaw, jamaica to drink, soup to begin and a side of tortillas and soup to start was 2.75USD

You’ll see a lot of locals here, especially cab drivers on their break. I try to go early or a bit late to miss the rush. 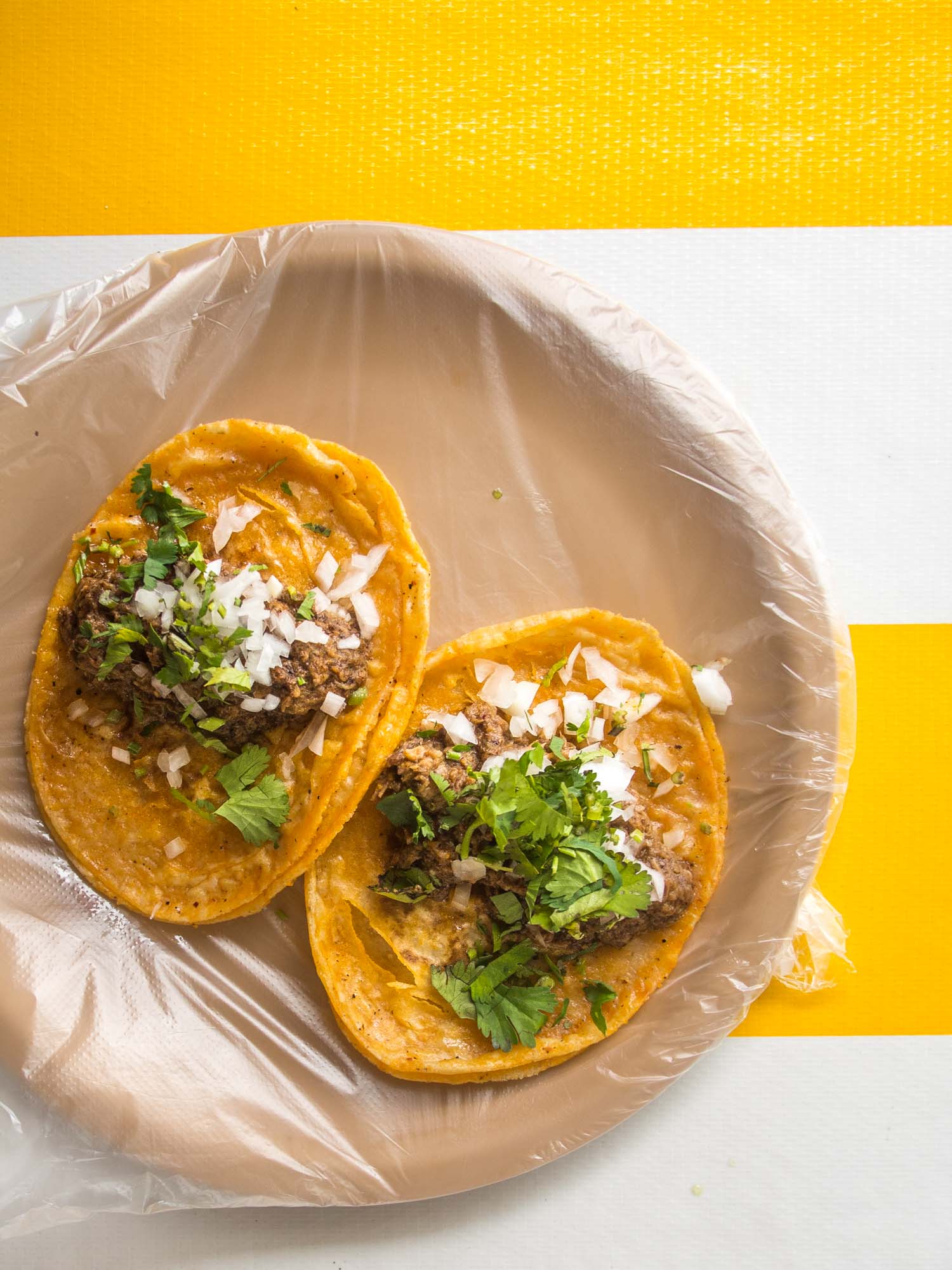 One of my favourite Playa del Carmen restaurants serves only two things – birria and consome (clear broth soup). It does these things so well it’s often full and locals stream in for pick-up orders.

The soup is great but I go for birria, spicy stewed beef topped with onion and cilantro. It’s a simple bub rich flavour as they stew the beef for hours.

The first time I talked to the owners about birria, as I’ve had it in Ecuador and it was goat. He confirmed that birria  was once goat in Mexico as well. But goat are not easily found in the Yucatan Peninsula it evolved to become a beef stew.

It’s worth walking the five blocks from the main drag in Playa del Carmen as there are so many great restaurants on this strip.⠀⠀⠀⠀⠀⠀⠀⠀⠀
⠀⠀ 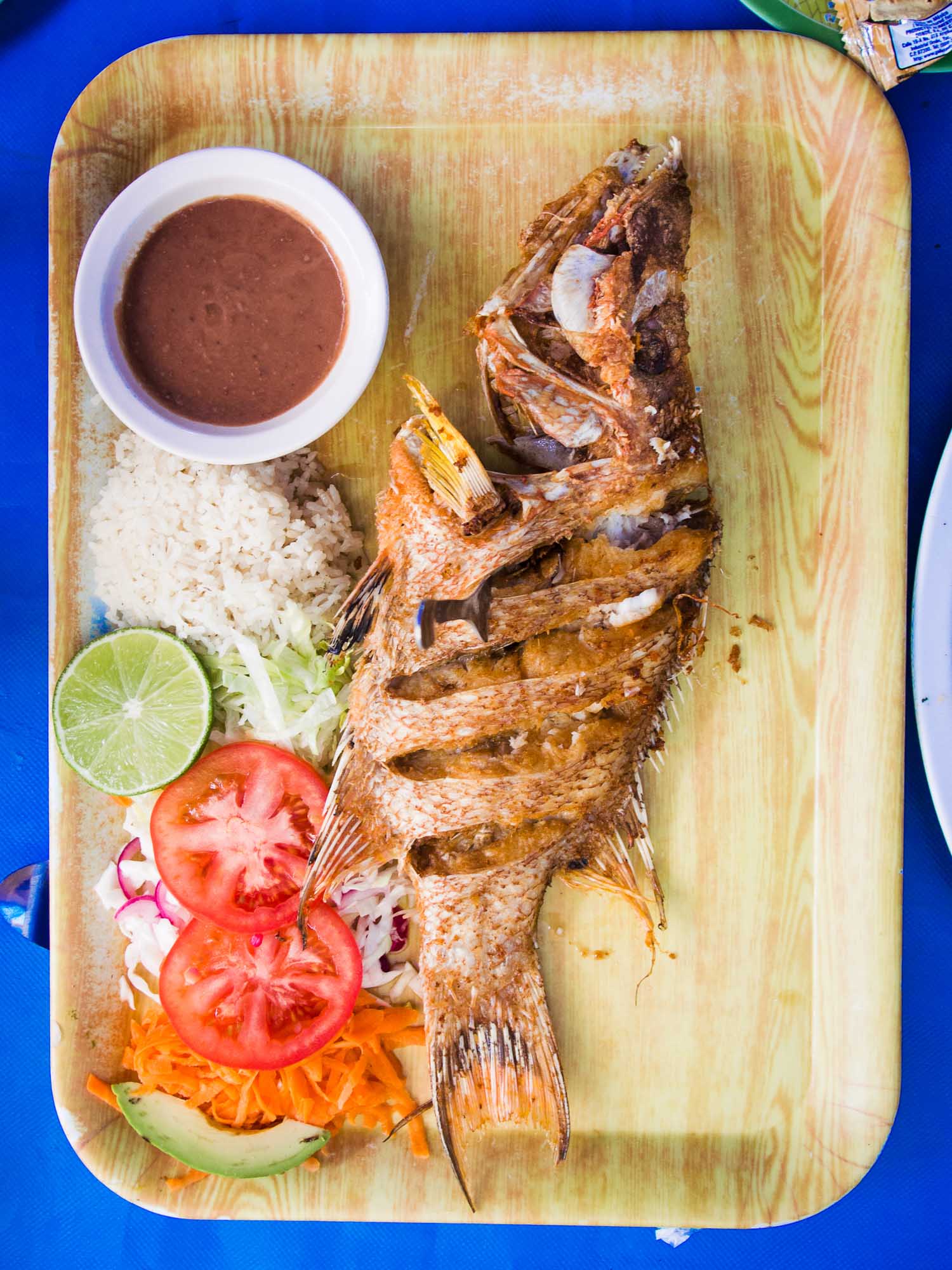 Although El Pirata is just around the corner from touristy Ave Quinta it’s still known as a great seafood spot. ⁣

They sell fish wholesale and will cook it for you for 20 pesos more, which is a bargain. ⁣

The first fish they brought for us to inspect didn’t have the clearest eyes so we asked for a different one which was much less expensive and fresher eyes.⁣ Don’t be afraid to ask to see more.

Because it’s so close to Quinta there is a rotation of musicians playing for tips. Average tip is no more than 20 pesos. Some are amazing and others are aspiring karaoke singers at best.⁣ 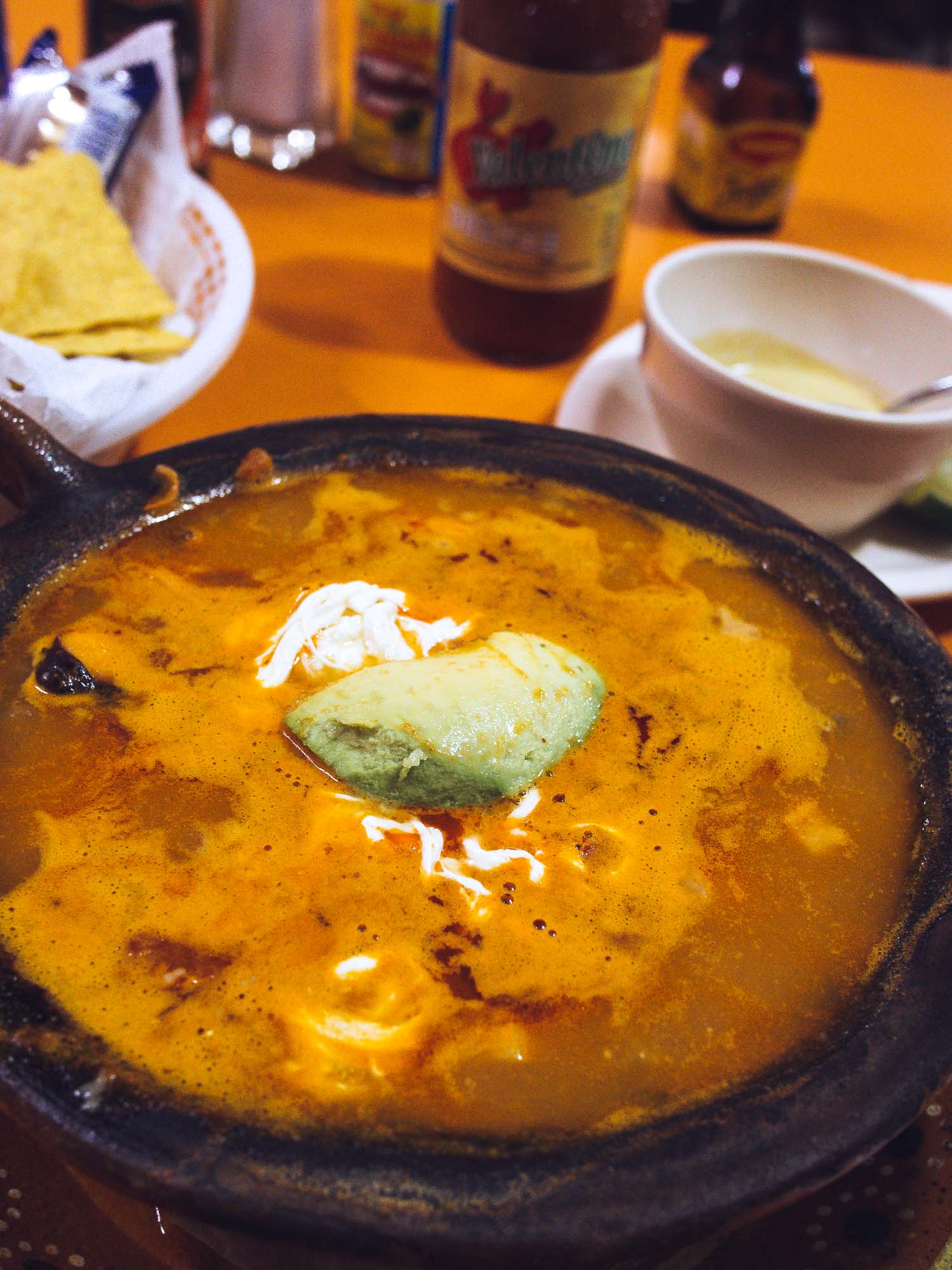 Considered one of the best seafood restaurants in Playa del Carmen, it is always filled with locals.

But the most well known dish is the very hearty cazuela camerones con queso (above), which is a shrimp stew with cheese. Even the small is quite large so it’s best to split and also try another lighter dish. 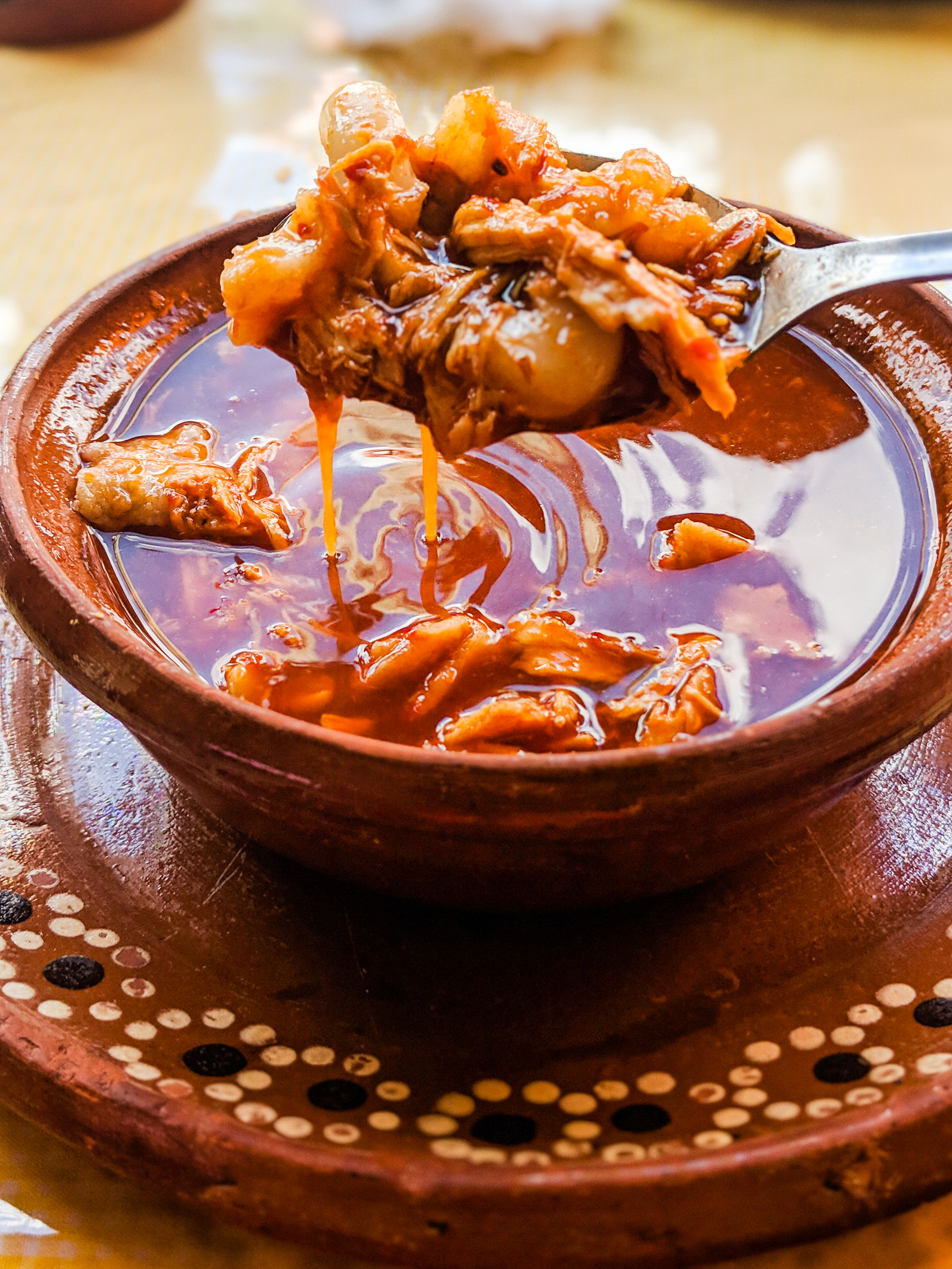 Another restaurant that specializes in just one thing – pozole.

This is one of many authentic Mexican Playa del Carmen restaurant’s that you’ll find on 30th Avenue, which is less than a ten minute walk from 5th avenue and next to the big supermarkets.

It has traditional Mexican food favourites but most people go for the red pozole, which is a hearty stew with hominy (white corn), pork or chicken, and a spicy chile broth.

It’s served with a tower of condiments – radishes, onion, cilantro, lime, tortillas. You personalize it as you see fit.

You’ll love it so much you’ll want to make pozole at home. 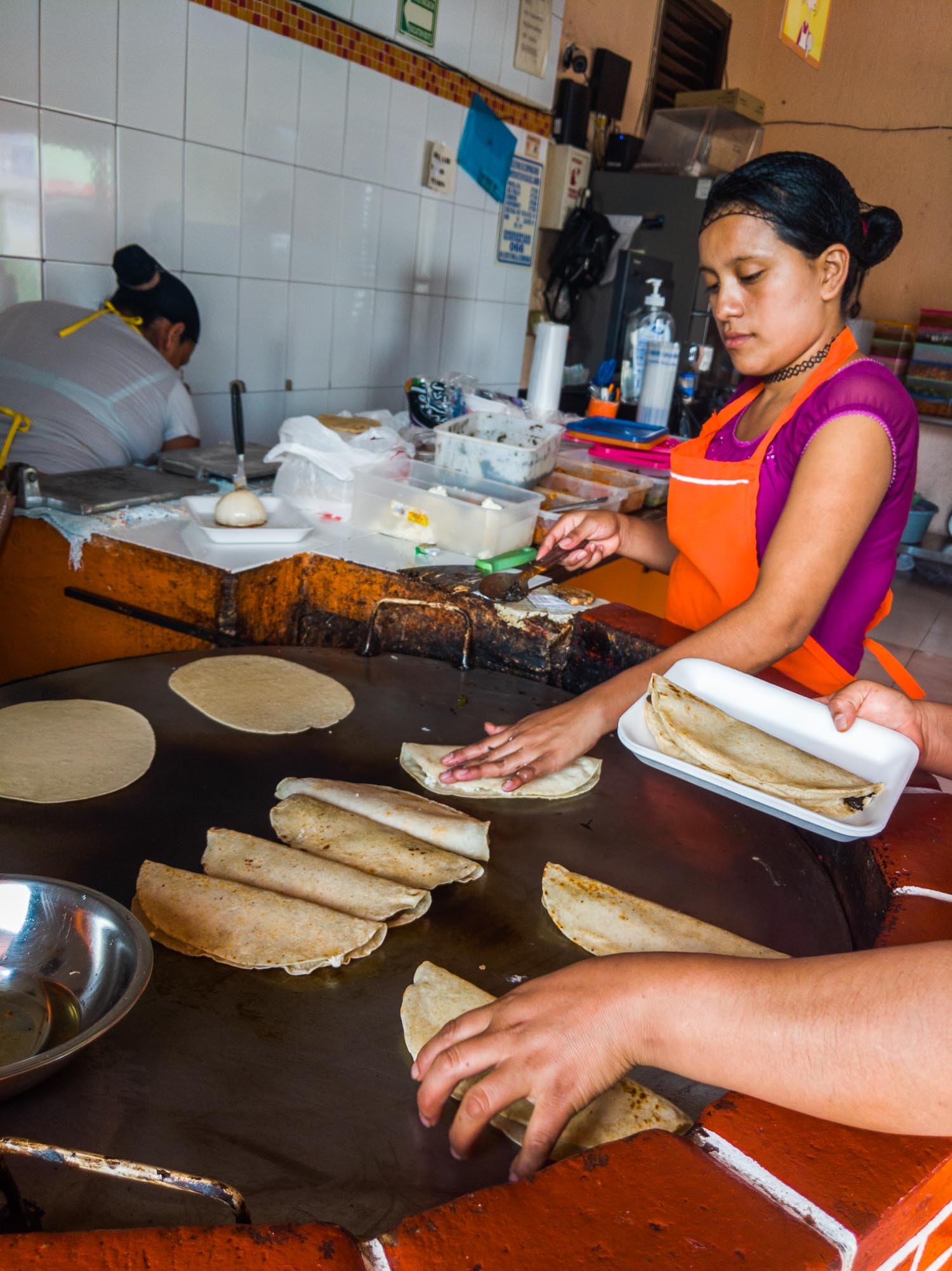 If you’re craving a snack this is the best chain is the best place to go because it doesn’t feel like a chain restaurant in Playa del Carmen.

You’ll find them all over the city, Las Quekas specializes in quesadillas for about a dollar each.

These aren’t just tortillas with cheese. You can choose chicken tinga, chorizo, beef or great vegetarian options like zucchini blossoms, mushroom or huitacoche (corn smut – sounds terrible but it’s worth it).

It’s a fantastic budget option and I often stop in for one…or two mid-afternoon when I need a snack.

Las Quekas
30th Avenue, Between 32nd and 34th St across from the Mega supermarket

Pin it For Later: Restaurants in Playa del Carmen 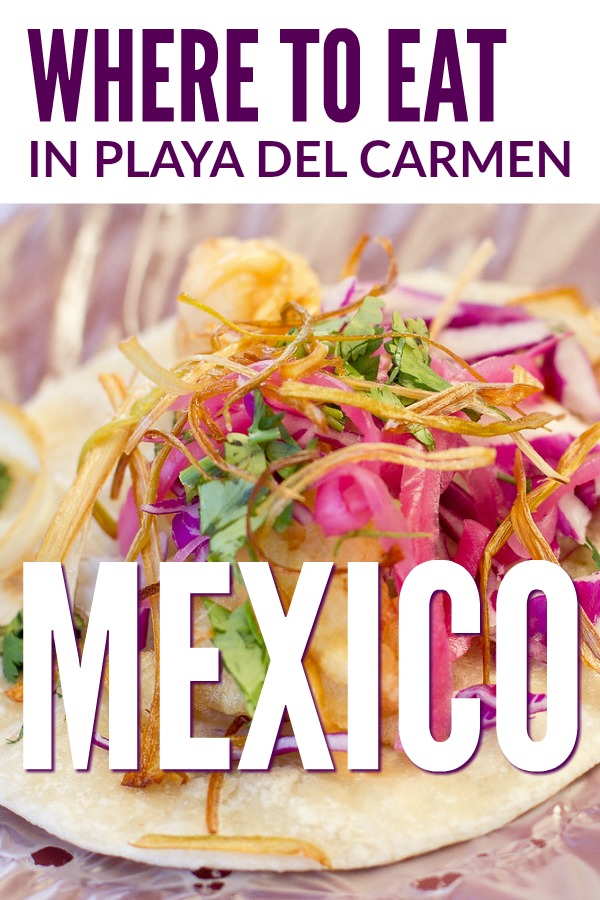 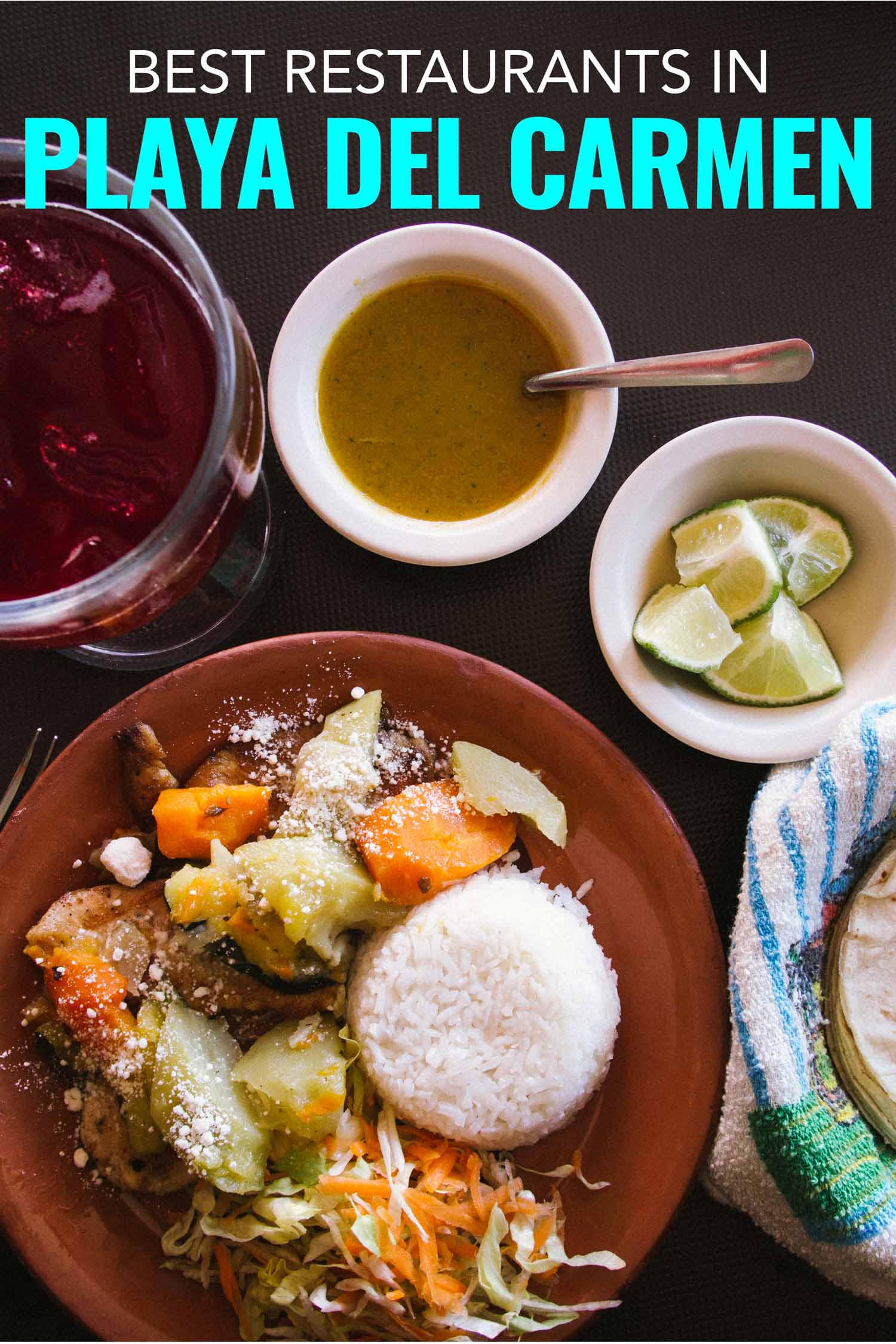 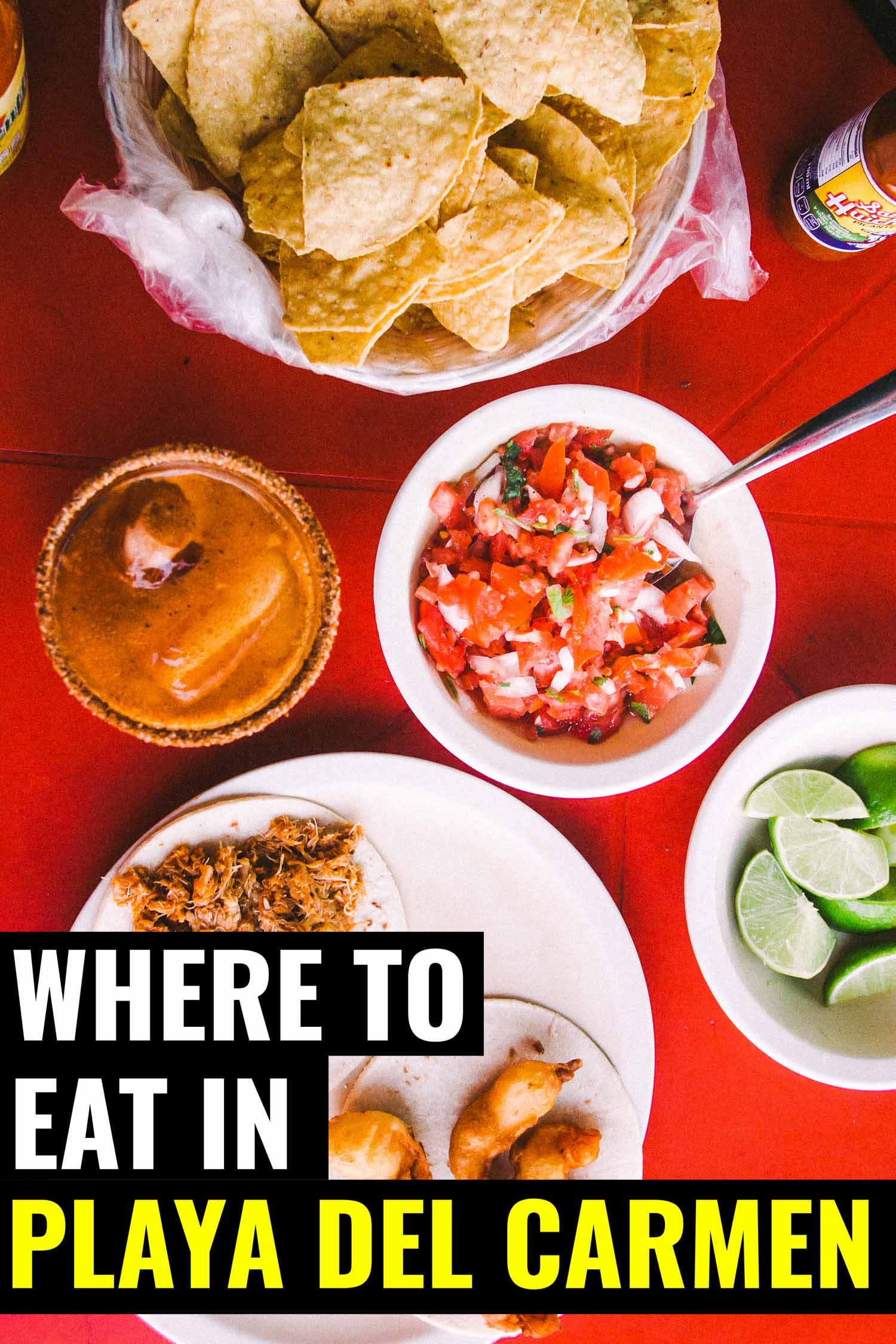 Map: Where to Eat in Playa del Carmen