The zombie cocktail may be a spellbinding hit at Halloween but it was actually named because it turns the person drinking it into a zombie.

I don’t love Halloween. I think the secret to a good Halloween is liking to dress-up. But for me it just shines a spotlight on two of my biggest faults 1) lack of creativity and 2) procrastination.

Every year I say I’m going to remember a great costume from the year before and use it the next year.

And so my Halloween highlights include being Rainbow Bright as a child – thanks Mom! 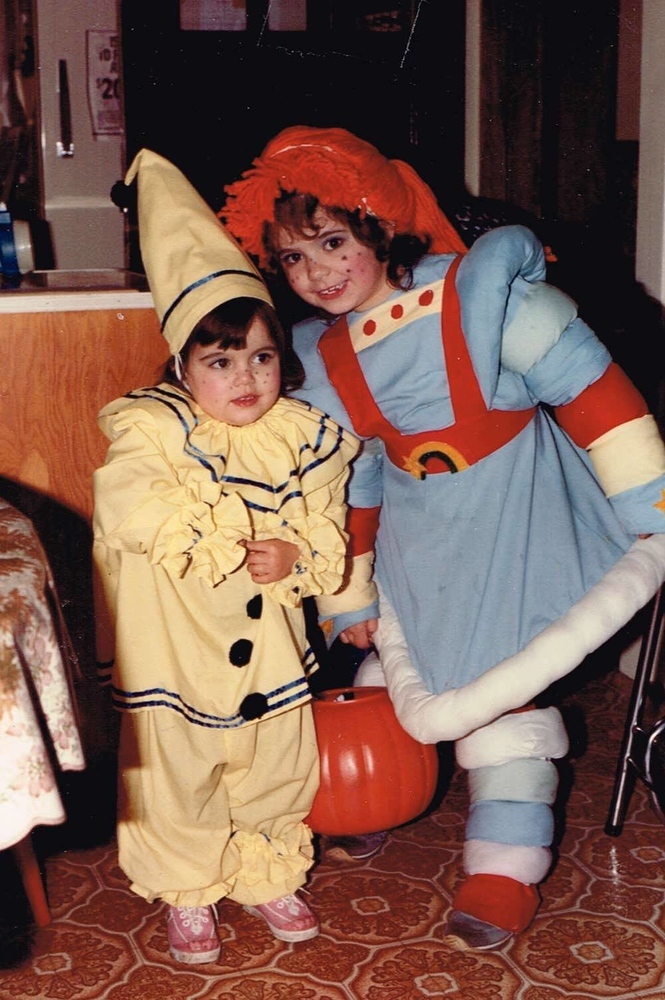 Followed by many years of lame costumes including book nerd, bumblebee, police officer – thankfully I didn’t lower myself to sexy cat.

And the last year was over a decade ago when I was She-Ra Princess of Power.

Only because my friend John John loved Halloween so loved much he not only made his own Goth Brooks but also my complicated superhero costume.

I decided that was my peak. There was nowhere to go but down so I retired from costume wearing.

I like the idea of Halloween. I like haunted houses and pumpkin walks. But Halloween seemed to be missing one key fun element of holidays.

Yesterday I received this Zombie cocktail recipe in my email and it piqued my interest.

Was it just some lame attempt from Bacardi to exploit Halloween as a reason to drink an orange drink with rum?

It turns out this zombie cocktail has been around for eighty years!

This post isn’t paid for by Bacardi, since researching classic cocktails in Cuba I’ve become fascinated with how drinks have evolved over the years.

Who Invented the Zombie Cocktail?

The story of the Zombie cocktail is as crazy as the drink.

Ernest Gantt, was a traveler, a bootlegger and a businessman. In the 1930s he moved to Hollywood, changed his name to Donn Beach and opened the restaurant Don the Beachcomber.

It was one of the restaurants that launched the Tiki craze.

His restaurant was filled with Polynesian tiki decor, complete with a thatched roof, tiki torches, statues and of course tiki cocktails that promised to protect you from harm. 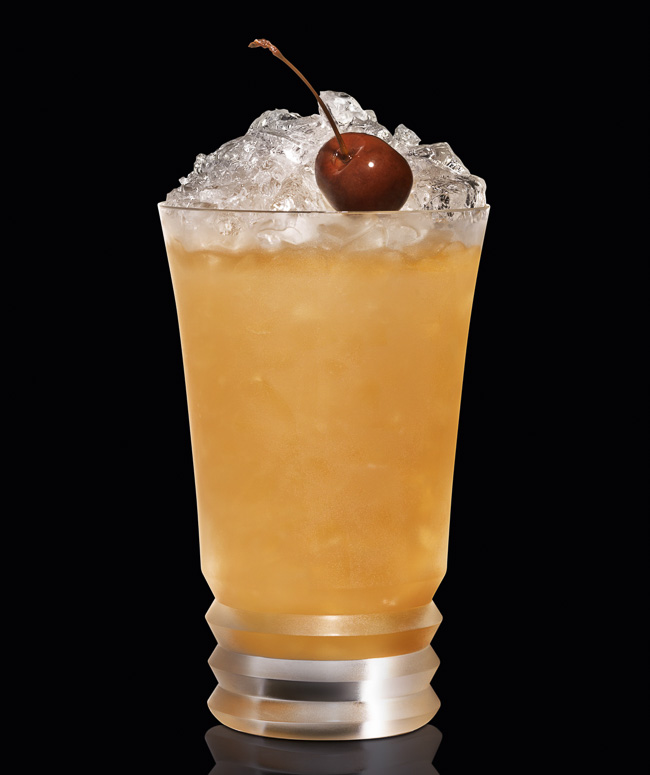 Don was known to use cheap spirits from the Caribbean. And so he was generous with how much alcohol was in his drinks.

The Zombie cocktail was a generous 4oz pour of rum along with high sugar fruit juice and Bacardi 151 rum floating on top.

It is a dangerous combination as the fruit juices masks the potency of the rum.

The Zombie cocktail legend says that one of Donn’s customers came in hungover and needed help getting through a meeting. And so he concocted this cocktail.

But the customer returned days later to complain because the cocktail turned him into a zombie!

Later in 1939 at the New York World’s Fair he debuted the Beachcomer Zombie cocktail at the Hurricane Bar. However he had a rule that a customer cannot be served more than two.

But the zombie tiki drink wasn’t his only claim to fame. Donn continued to invent classic tiki cocktails including the Tahitian Rum Punch and the Navy Grog.

No one really knows the original Zombie cocktail recipe. Bar owners never shared their recipes because of fierce competition in the Tiki Bar scene.

At the bar he made the syrups himself. As well, he wrote coded recipes for his bartenders so they could not leave knowing the recipes.

Even today bartenders would have difficulty identifying classic Tiki cocktail ingredients. They often included multiple fruit juices, syrups and rum which is tricky.

But also, recipes changed over the years. And so the Zombie cocktail he was using in the 1950s was different than what he used in the 30s.

This opened up many interpretations of the drink. Yet always with the essence of a Zombie cocktail simply being a tropical fruit juice blend with lots of alcohol.

It is somewhat similar to the rum punch in Barbados.

ALSO READ:
What to Drink in Barbados

Or some say it wasn’t falernum but a cinnamon simple syrup. No one knows for sure.

The basic formula for a Zombie is both light and dark rum, with the option for a 151-proof rum to float on top. It must also have fruit juice.

While the original likely had papaya, pineapple and lime, modern Zombie cocktails use a variety of tropical juices from orange to passionfruit.

It’s also made in batches for parties to serve as a Zombie punch. In this case I think it should include more fruit juice. Unless you want the party to go off the rails. 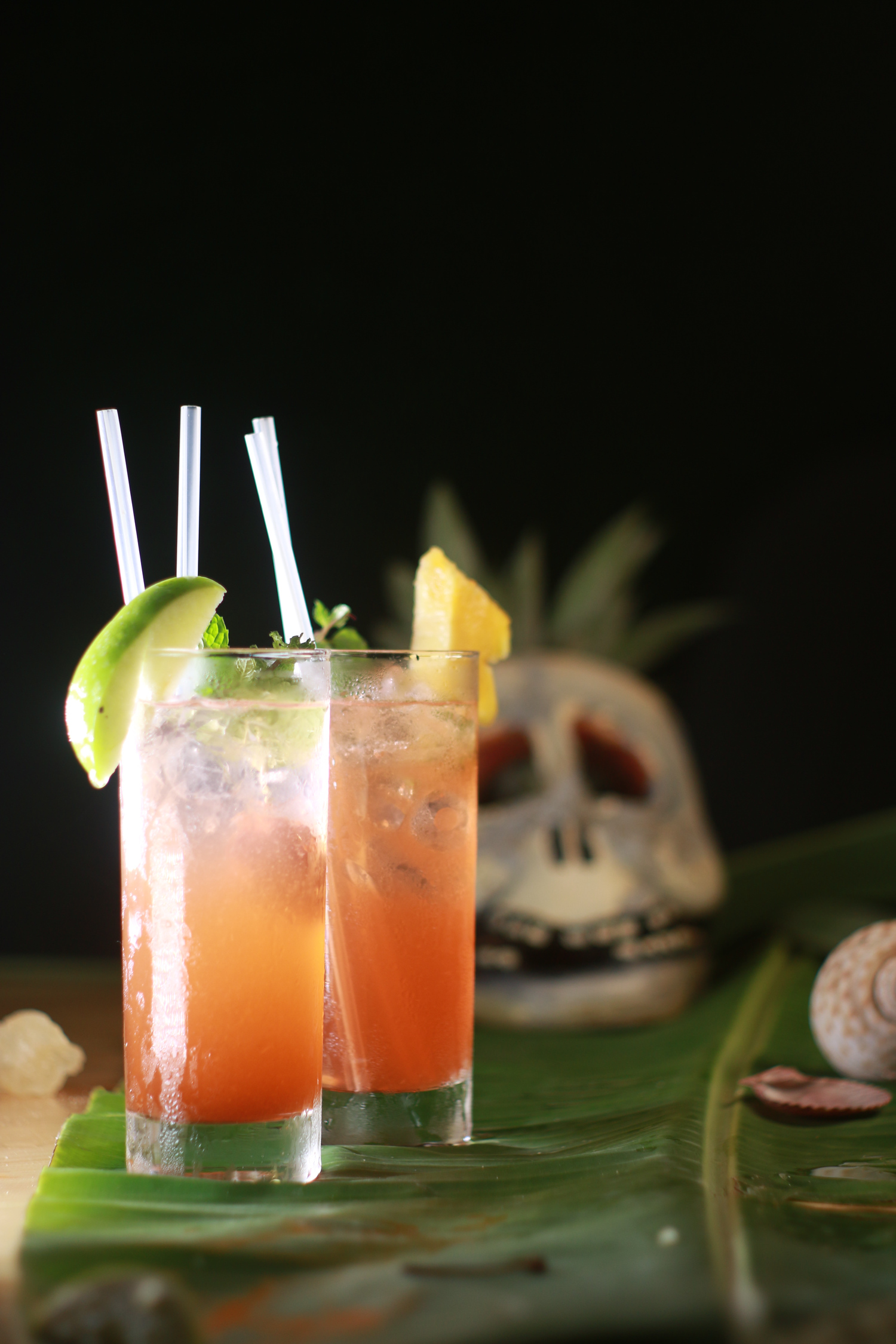 I prefer a cocktail recipes that uses mostly ingredients I already have. So I like the more simplified versions of the Zombie.

Simple syrup sounds intimidating but really it’s quite easy…or rather simple. Over medium-low heat put equal parts of water and white sugar into a saucepan and stir.

Once the sugar has dissolved into the water remove from the heat and let cool. Easy peasy! 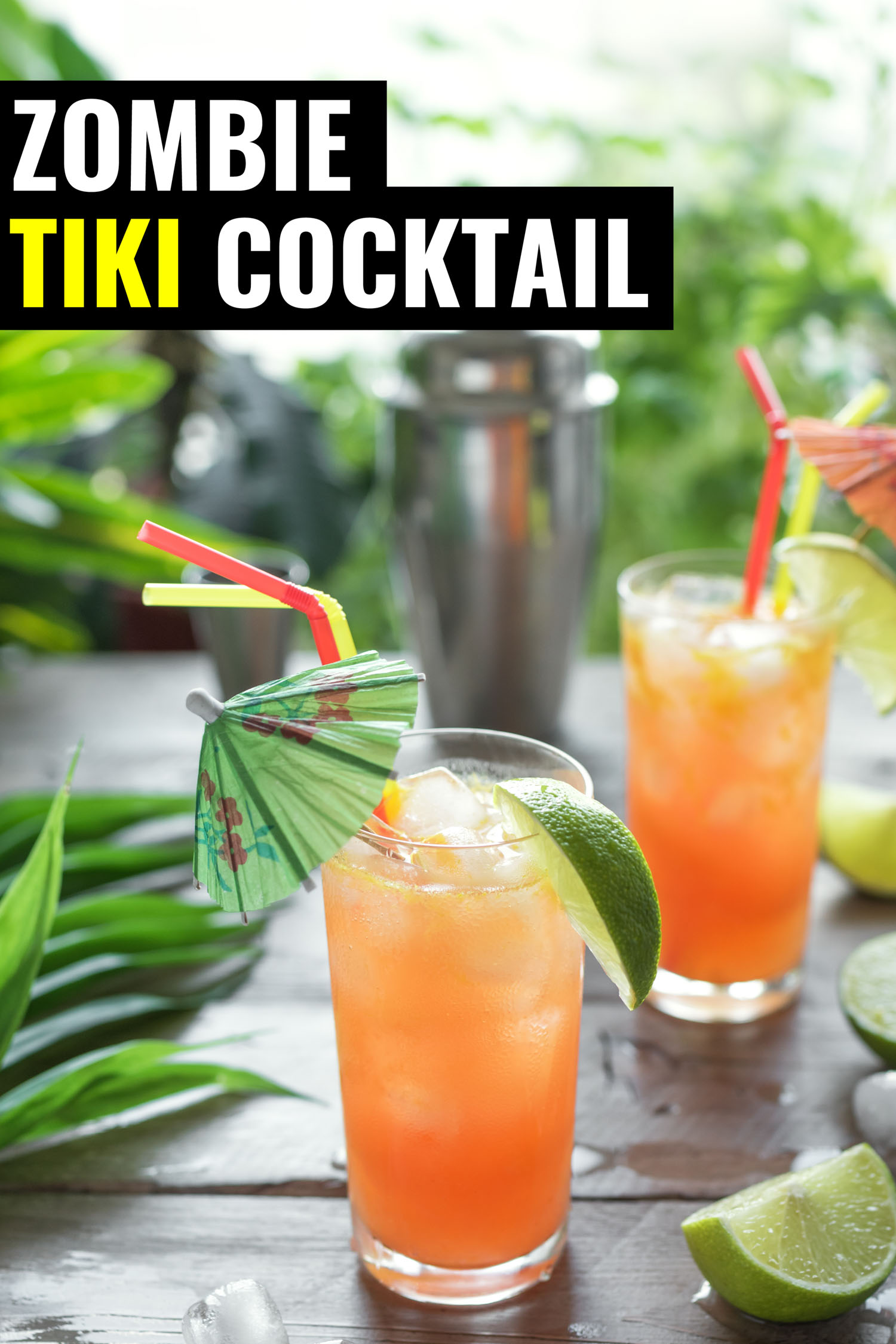 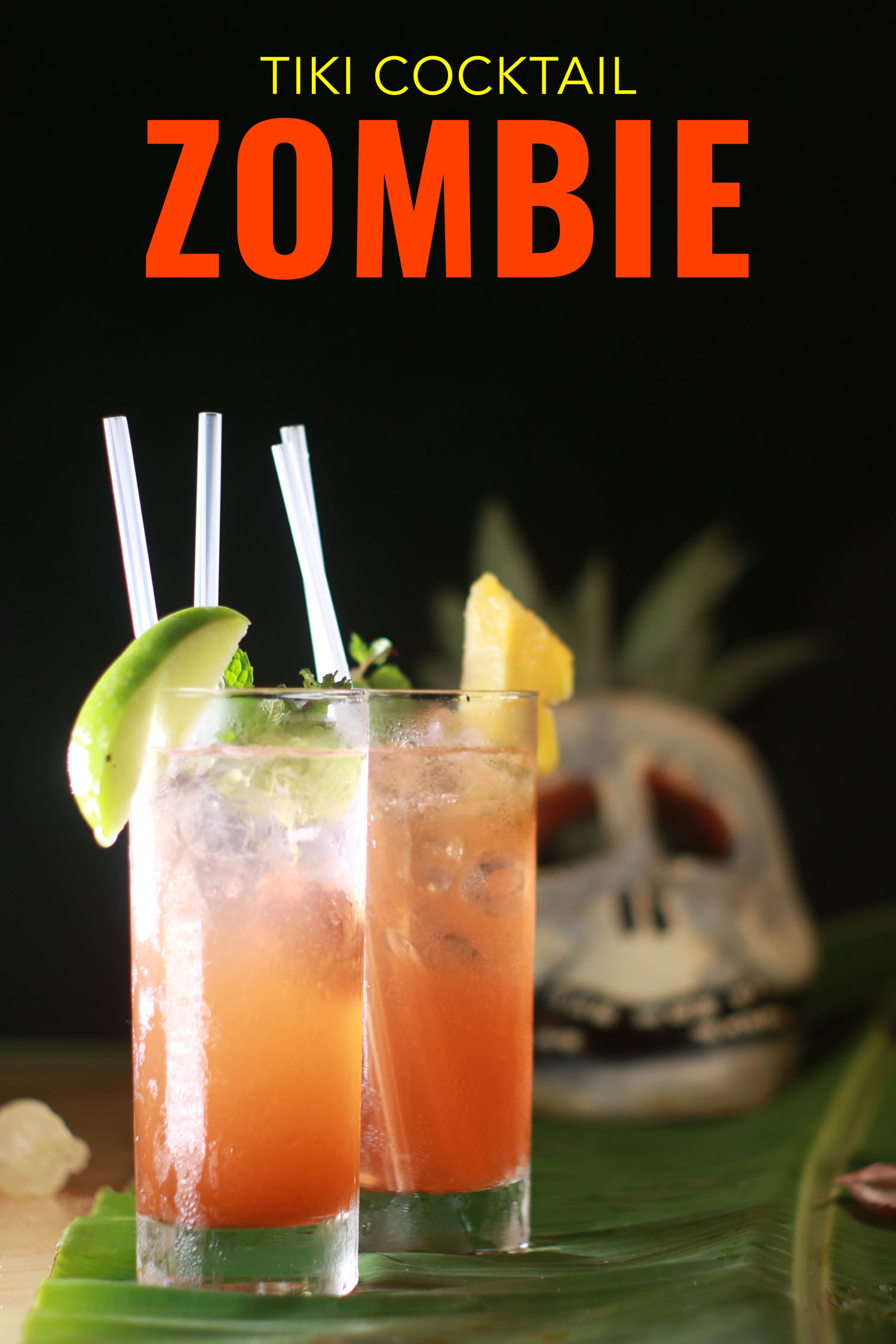 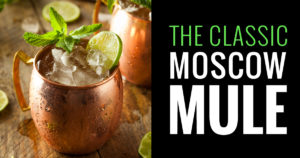 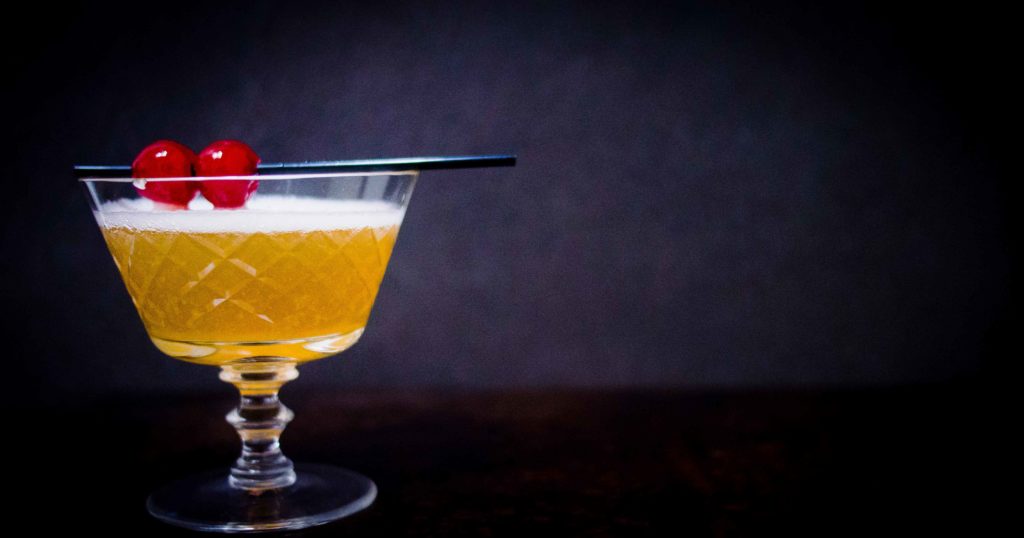