I won’t lie, when I first arrived in Chile I wasn’t blown away by Chilean food. I had just come from Peru where even vegetarian food in Peru was spectacular.

But when I asked Chileans what the most famous foods were they often shrugged and said “sandwich?”

You have got to be kidding me. A sandwich is the height of Chilean cuisine?

Obviously I was asking the wrong people because Chile has a long history of incorporating various immigrant culinary cultures with its own fantastic seafood, pork and beef.

There are so many more things to eat than just sandwiches!

What is Chilean Food?

Chilean food has been influenced by many different cultures over the years.

From the native Amerindians to the Italians, Arabs, and Germans, each culture has made a lasting impact on the cuisine that can be found there today.

Along with many other Latin American countries, the Spanish arrived in Chile in the mid-1500s bringing many fruits, vegetables, and animals with them.

The Amerindians influenced Chilean cuisine with their use of corn in the majority of dishes.

The combination of the Spanish and Amerindian cultures formed the basis of the corn heavy diet of the 21st century.

German immigrants came in 1848 introducing rich pastries and cakes to the Chilean people. Around the same time, Italian and Arab immigrants also made their presence felt by bringing their unique styles of cooking.

ALSO READ:
21 Exotic Fruits to Try Around the World

Respectively, the Italians brought different kinds of pasta and meat products along with frozen gelato to be mixed with Chile’s unique fruits.

While some dishes include aji or chile peppers, Chilean food is similar to Argentinean food, and is generally not spicy – at least not compared to Peruvian food or food in Mexico.

Some people think Chilean food is bland, which is why you need to become familiar with all the delicious sauces.

It’s mostly because of the different immigrants that came to Chile over the years.

The Arabs imported different spices and herbs that were to multiply the varying combinations of sweet and salty flavours.

Then in the late 1800s, British immigrants even introduced “teatime” which continues to be a popular tradition in modern-day Chile.

Chilean dishes are a unique blend of varying cultures and customs.

Whether you try a dish that has Italian or German roots, Chile’s take on the dish is sure to make it one of a kind.

Traditionally a summer dish, the name is derived from the cranberry beans, sweet corn, and pumpkin that make up the stew.

It is served hot and can include herbs such as cumin, basil, or oregano in addition to onions.

It is a hearty Chilean pot roast type stew generally made with beef or chicken, and can include potatoes, pumpkin, rice and a number of other vegetables.

The stock procured from the boiling of the ingredients is traditionally eaten first before the meat and vegetables.

This South American dish holds a special place in Chileans’ hearts and traveling to Chile is not considered complete without trying this delicious delicacy.

A mainstay of las fiestas patrias – their independence day, empanadas de pino are typically baked, although if you’re feeling particularly decadent you can try it fried.

It can include tomatoes, onions, chili peppers, cilantro and is generally topped with olive oil.

Who doesn’t love a good barbecue?

THE ART OF THE:
Argentinean Asado

A tradition that is known for the food as much as if not more than the social festivities.

This is a common way to gather with friends on Sundays and for special occasions. 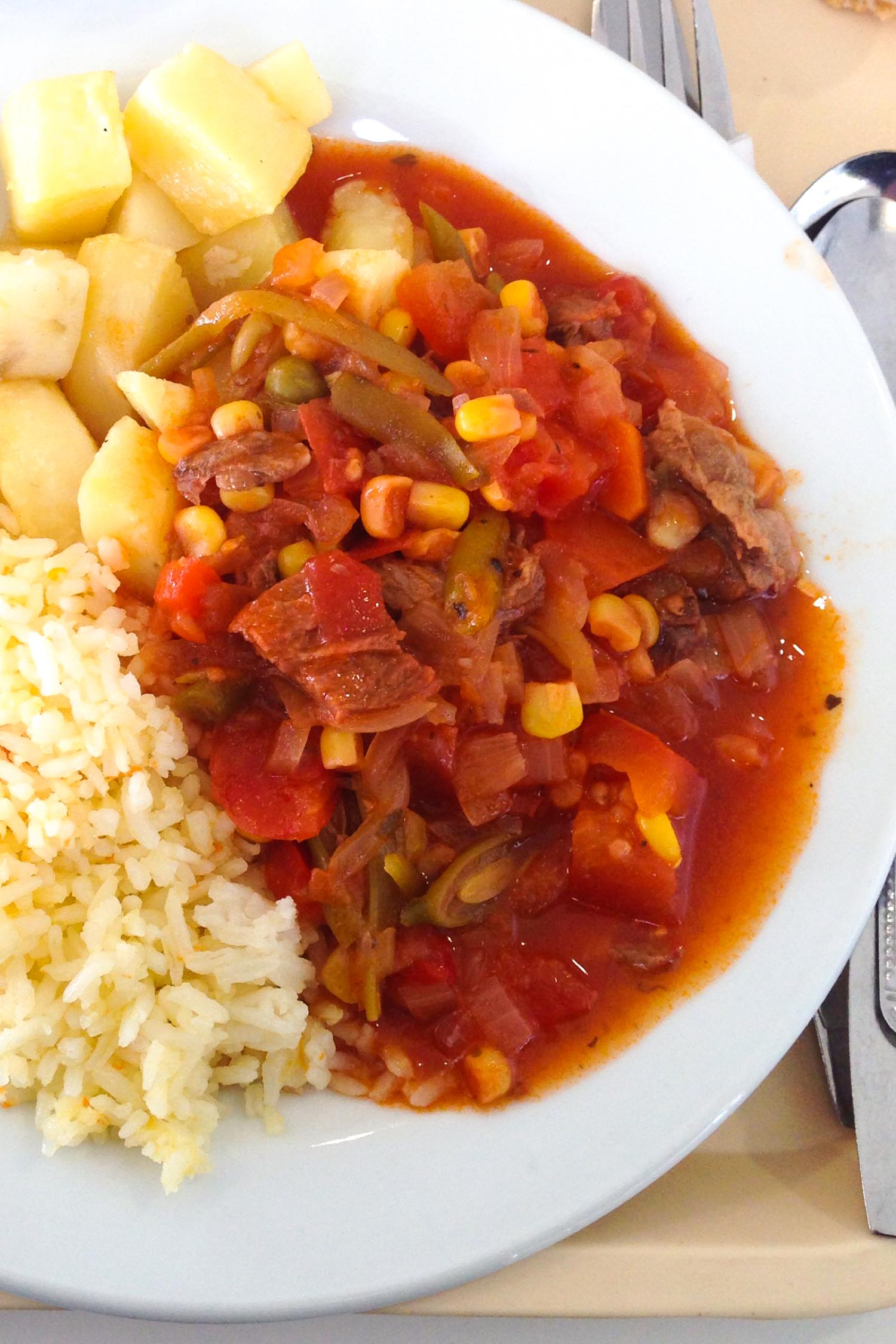 A combination of corn, tomatoes, and beef served over either rice or mashed potatoes makes up this Chilean dish.

Normally served during the summer, it can be topped with fresh parsley and garlic cloves. 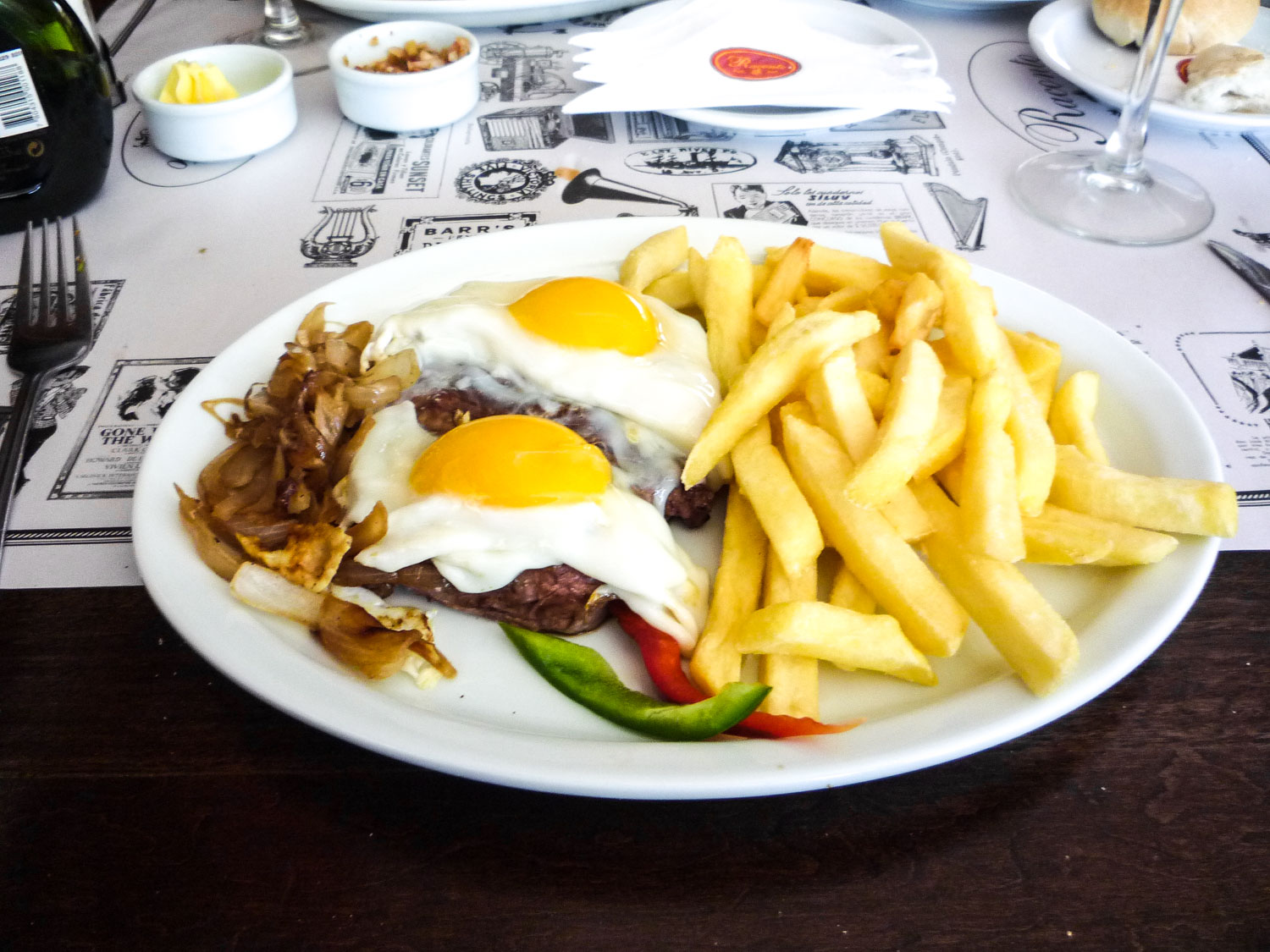 Roughly translated as “poor man’s steak”, this popular dish in Chile is a unique mixture of ingredients that would not appear to go together at first – steak, eggs, and french fries.

However, the interesting combination makes for one hearty meal that will surely fill you up.

Chile’s take on the ever popular pork rinds originating from Spain but most beloved in Latin America.

This Chilean food is occasionally served with a side of meat and homemade bread. 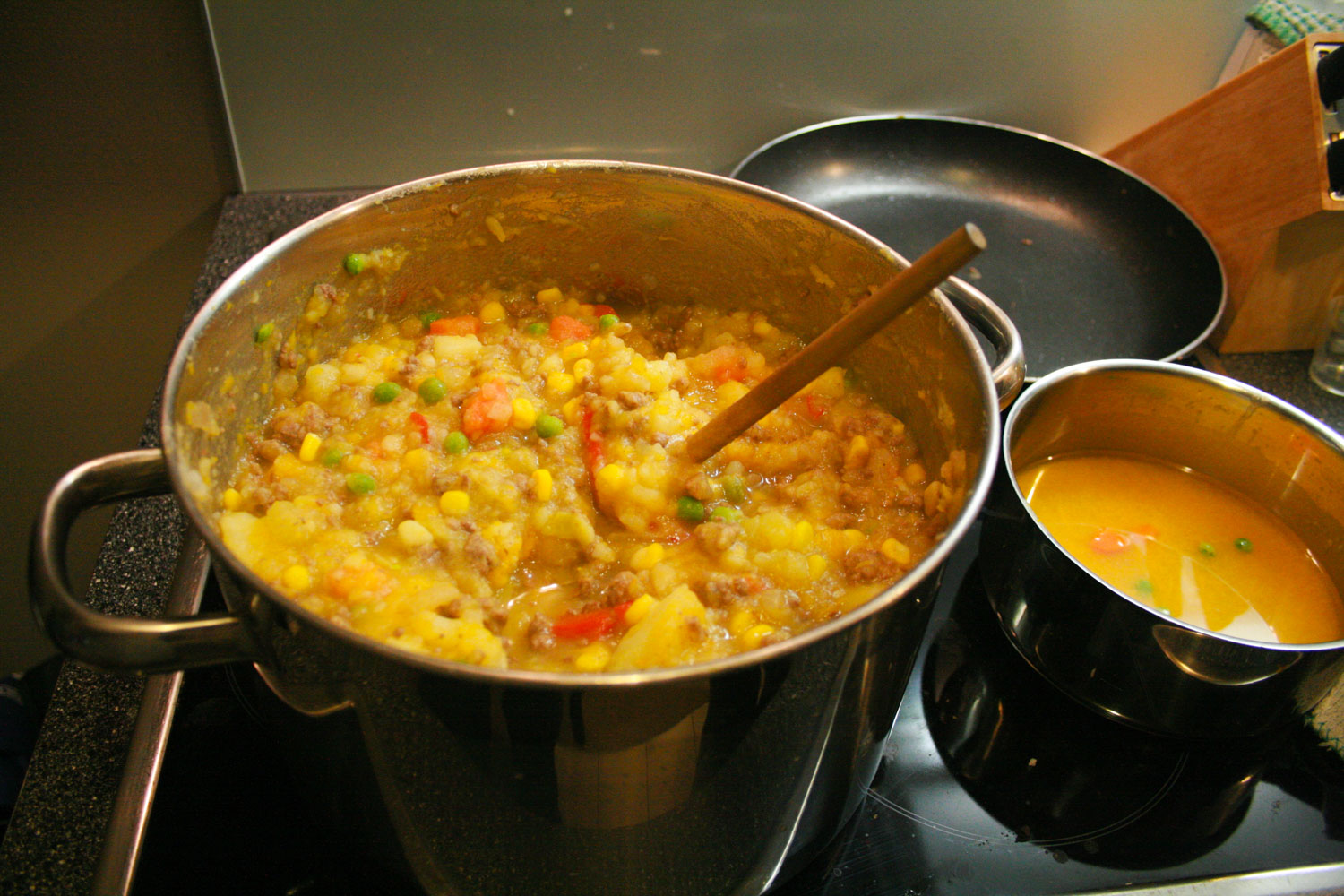 One of the unique Chilean dishes traditionally made with salted llama. However, it now consists of ground beef or jerky.

In Chile, the stew includes potatoes, white corn, onion, and pumpkin while paired with a fried egg for good measure.

South America’s take on a traditional Italian dish, a piece of meat is marinated, breaded, and fried– similar to chicken parmesan.

You may also find it as milanesa in Argentina or lomito in Uruguay.

Although, Chile’s version is topped with a fried egg instead of tomato sauce and served with a side of fries not unlike bistec a lo pobre. 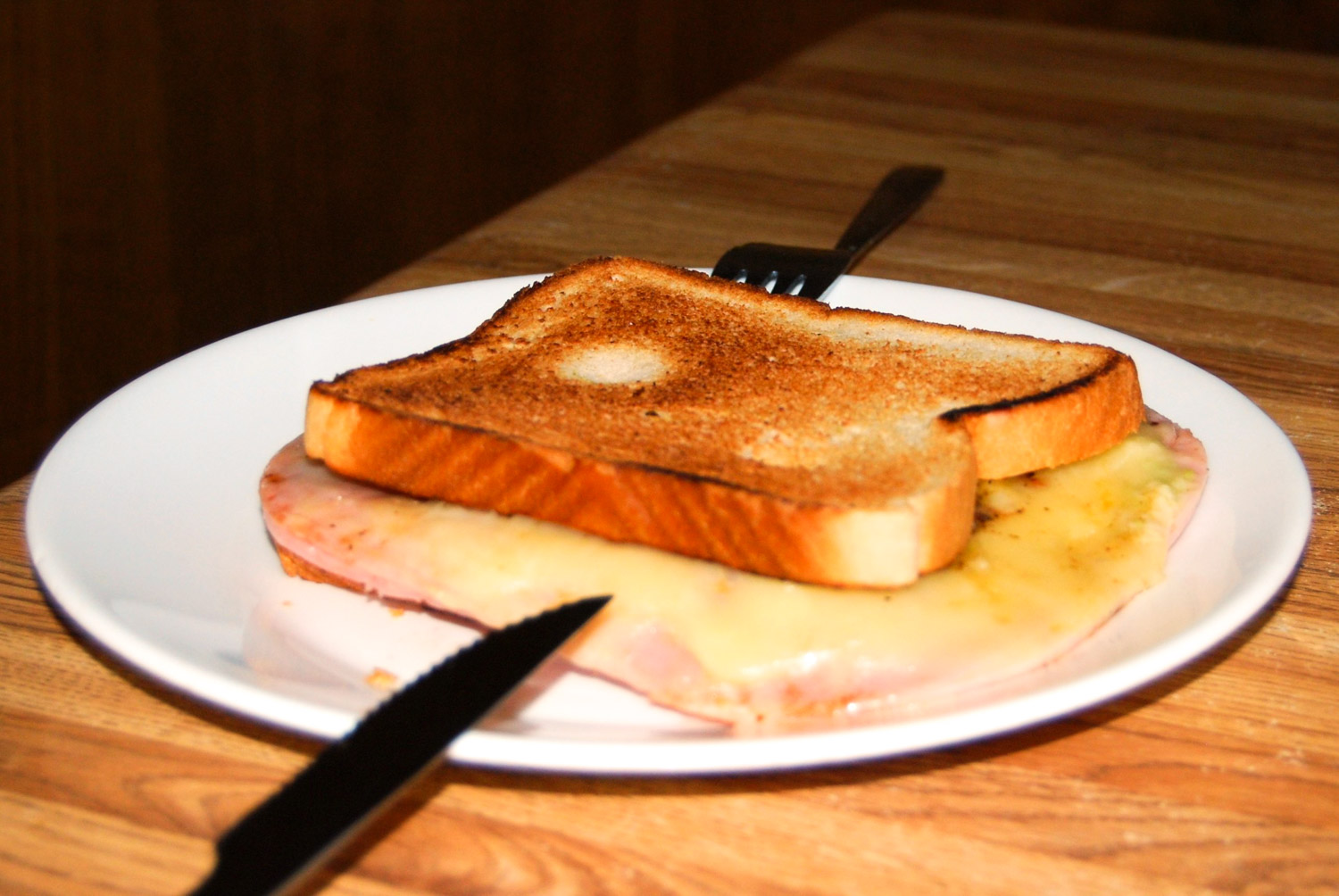 He found his cousin’s sandwich of beef and cheese hard to eat so he replaced the beef with ham and the rest was history.

Just like the barros jarpa, this Chilean food is made with beef instead of ham. This chilean food is served on white marraqueta bread topped with pebre sauce.

MAKE IT AT HOME:
Pebre Recipe

Churrasco-style steak or lomito-style pork is used for the meat of a chacarero.

It is served with tomatoes, green beans, chili peppers and mayonnaise on a roll. While it’s not traditional, a little mashed avocado is fantastic on it as well.

39 BEST:
Sandwiches Around the World

This famous Chilean sandwich can be found in fast food restaurants around Chile.

Time Magazine even named it one of the 13 most amazing sandwiches the world had to offer in 2015. This Chilean dish uses congrio dorado, a cusk-eel found off the coast of Chile.

It’s actually a very filling fish stew. Onion, garlic, cilantro, carrots and peppers are all boiled along with the fish.

The boiled eel is then served with a mixture of the vegetables, stock, and garlic. 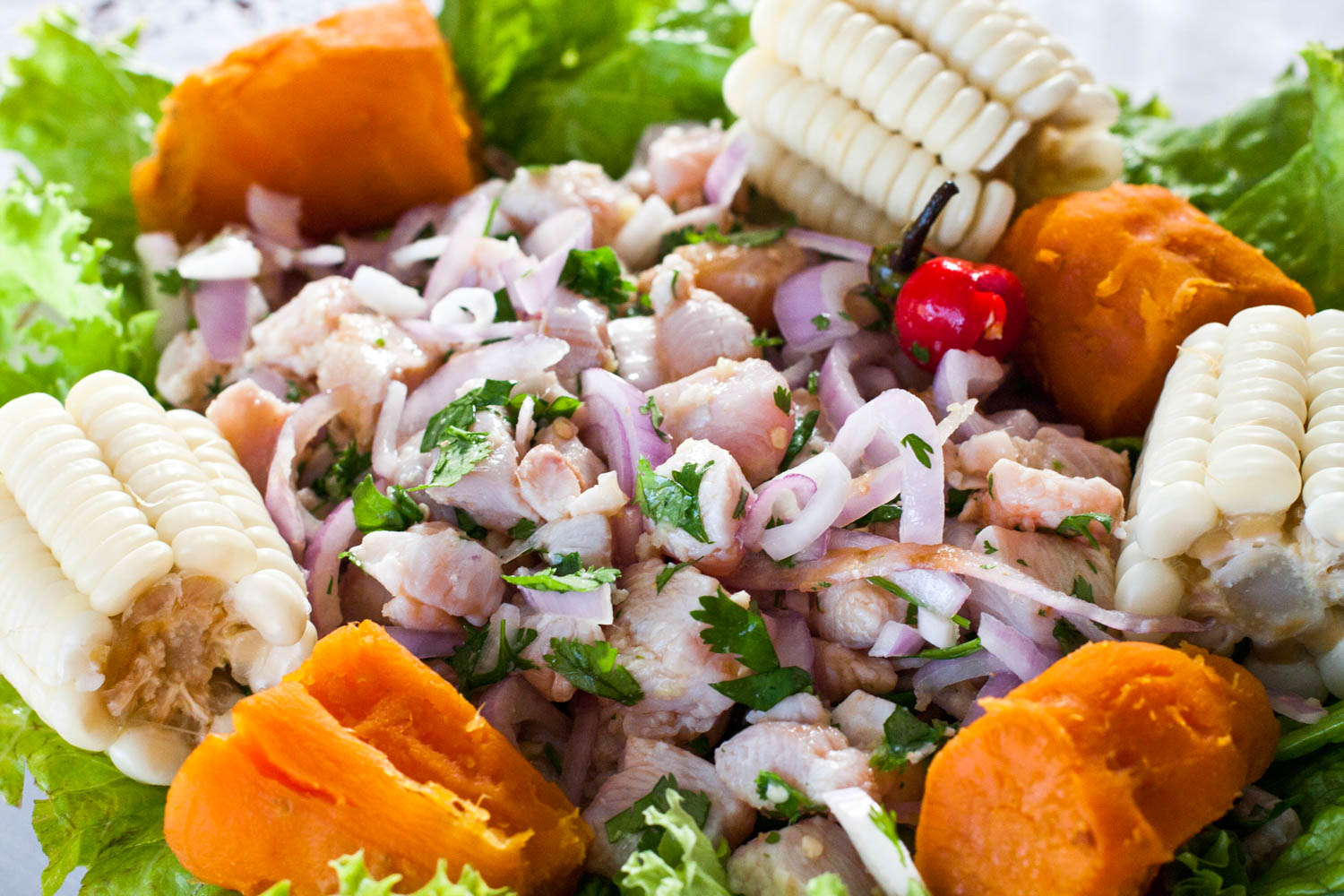 Chile and neighbouring Peru share some traditional dishes. While they battle over who first invented the pisco sour, there’s no doubt that ceviche belongs first to Peru.

But every country does it differently!

Chileans usually choose halibut or Patagonian toothfish from southern Chile for their choice of fish and it is not rare to find grapefruit juice, mint, and cilantro in the marinade.

This world-famous dish can be served with various types of fish. There are many recipes as it can be eaten either raw or cooked as it is with Ecuadorian ceviche.

However, in Chile the fish is typically marinated with lemon or lime juice as well as other spices such as ají chile peppers. 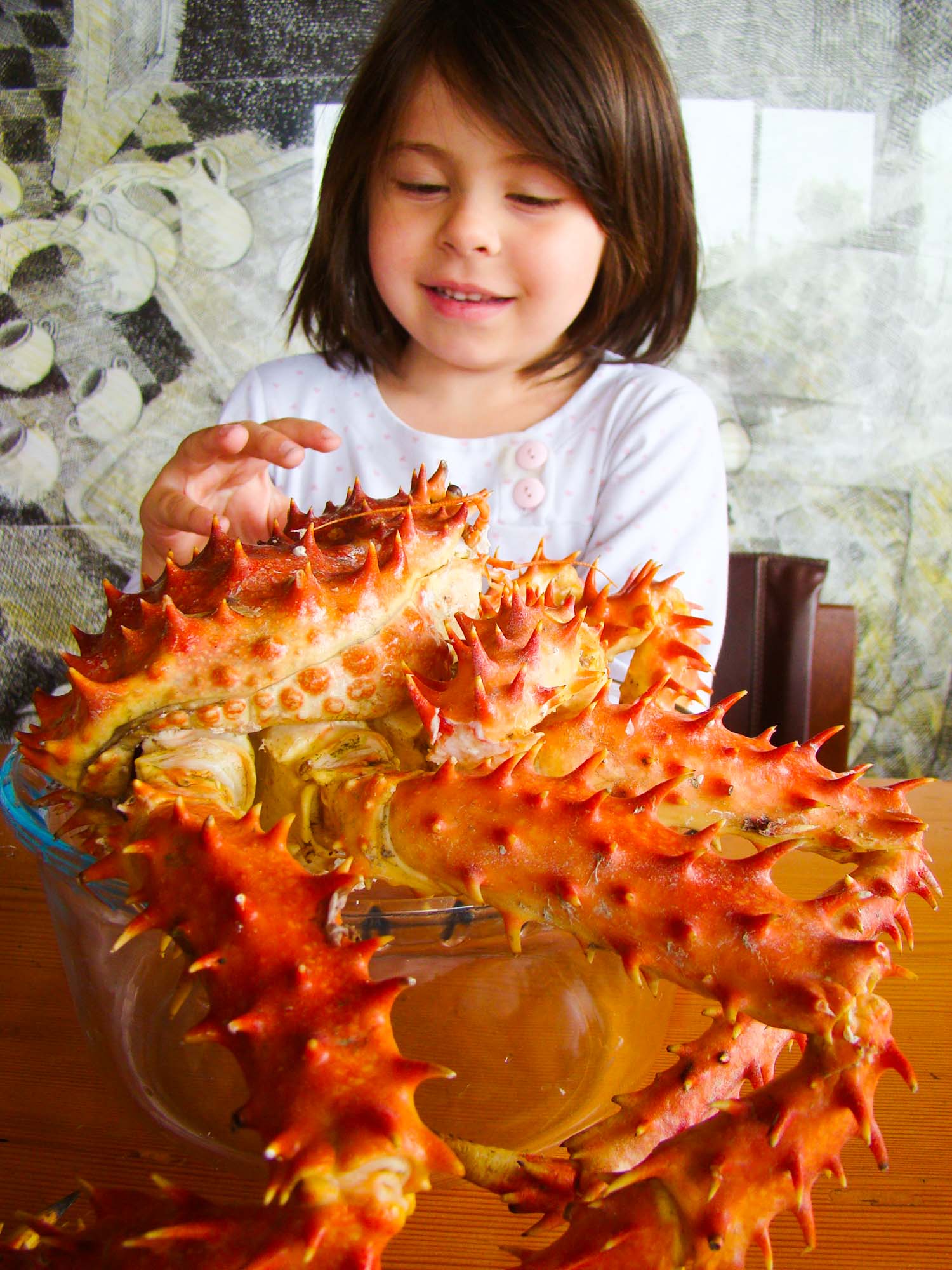 Found off the Pacific coasts of South America, this unique species of crab is a must for seafood lovers and an integral part of Chilean cuisine.

Whether you try chupe de centolla, a crab stew so thick it eats like a gratin, or simply devour it with fresh lemon or lime, it is sure to please! 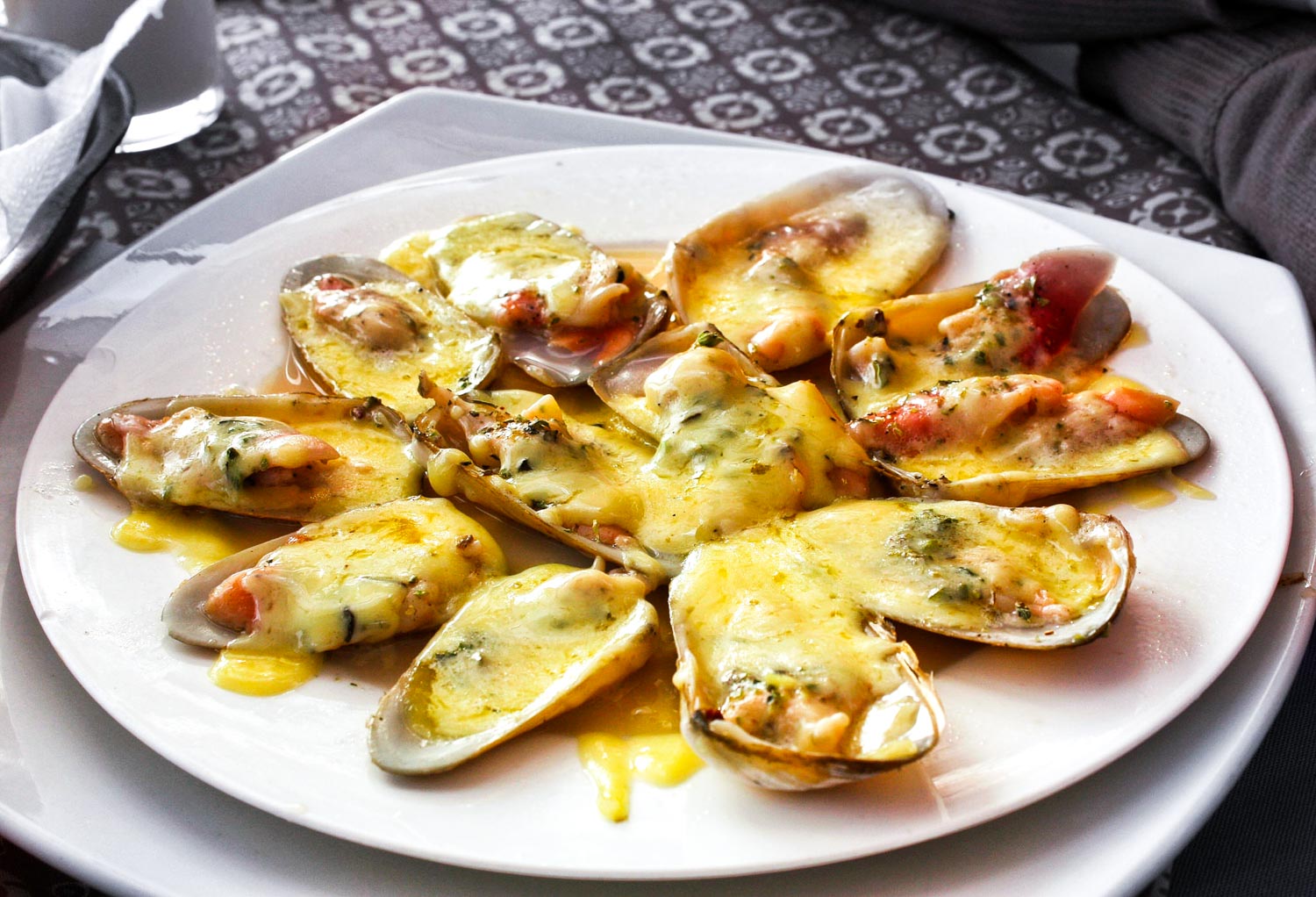 One of my favourite Chilean food, machas are a native saltwater clam found along the coast of Chile.

For this dish, clams are marinated with butter, white wine, garlic a little lemon and parmesan cheese then baked to perfection.

You may also find this dish using razor clams. 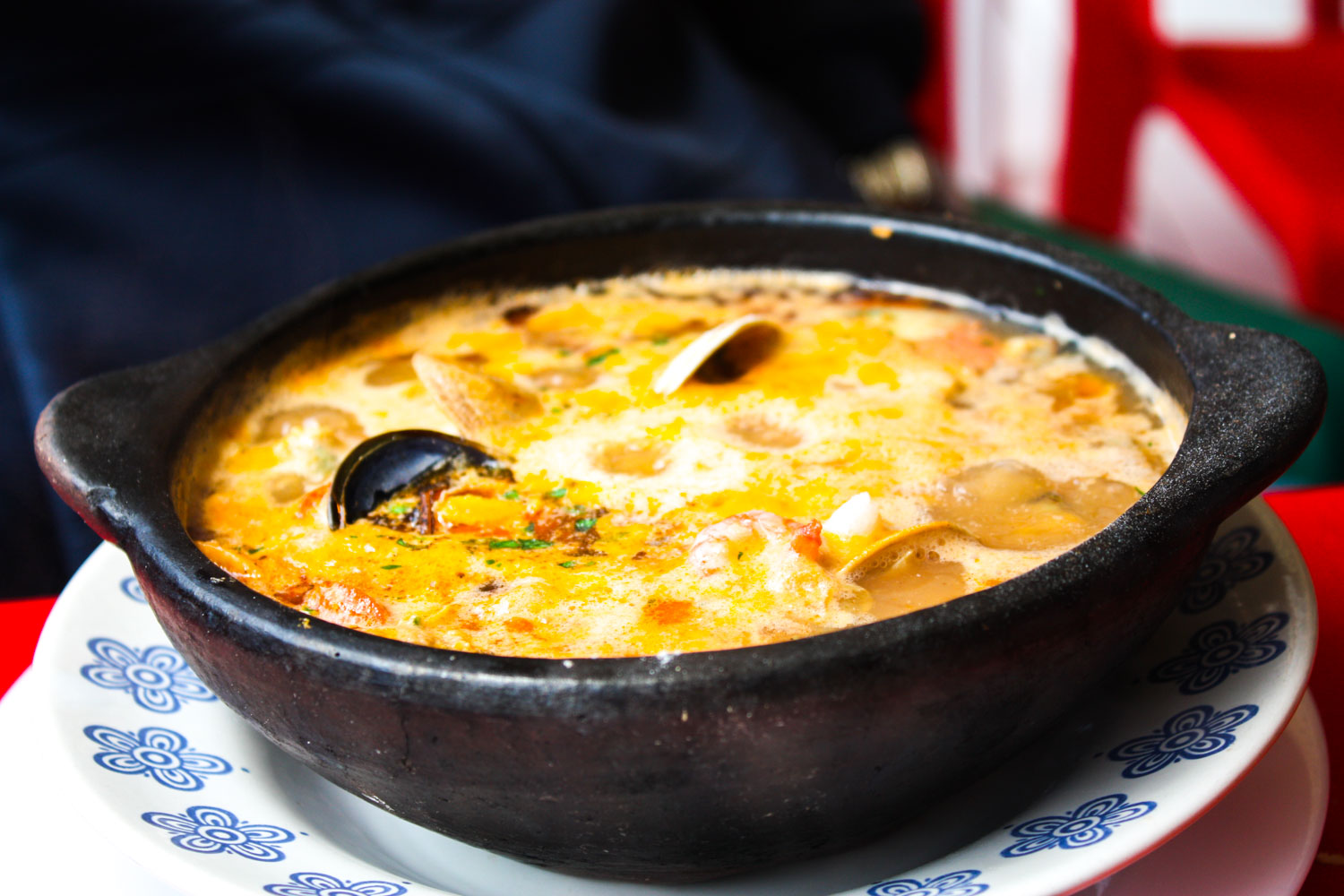 Served in a paila or earthenware bowl, this Chilean seafood soup is light and refreshing.

Various fish and shellfish can be used such as shrimp, eel, and clams to make the stock base seasoned with paprika and parsley.

Onions, tomatoes, and other vegetables can then be added as well to this delicious soup. 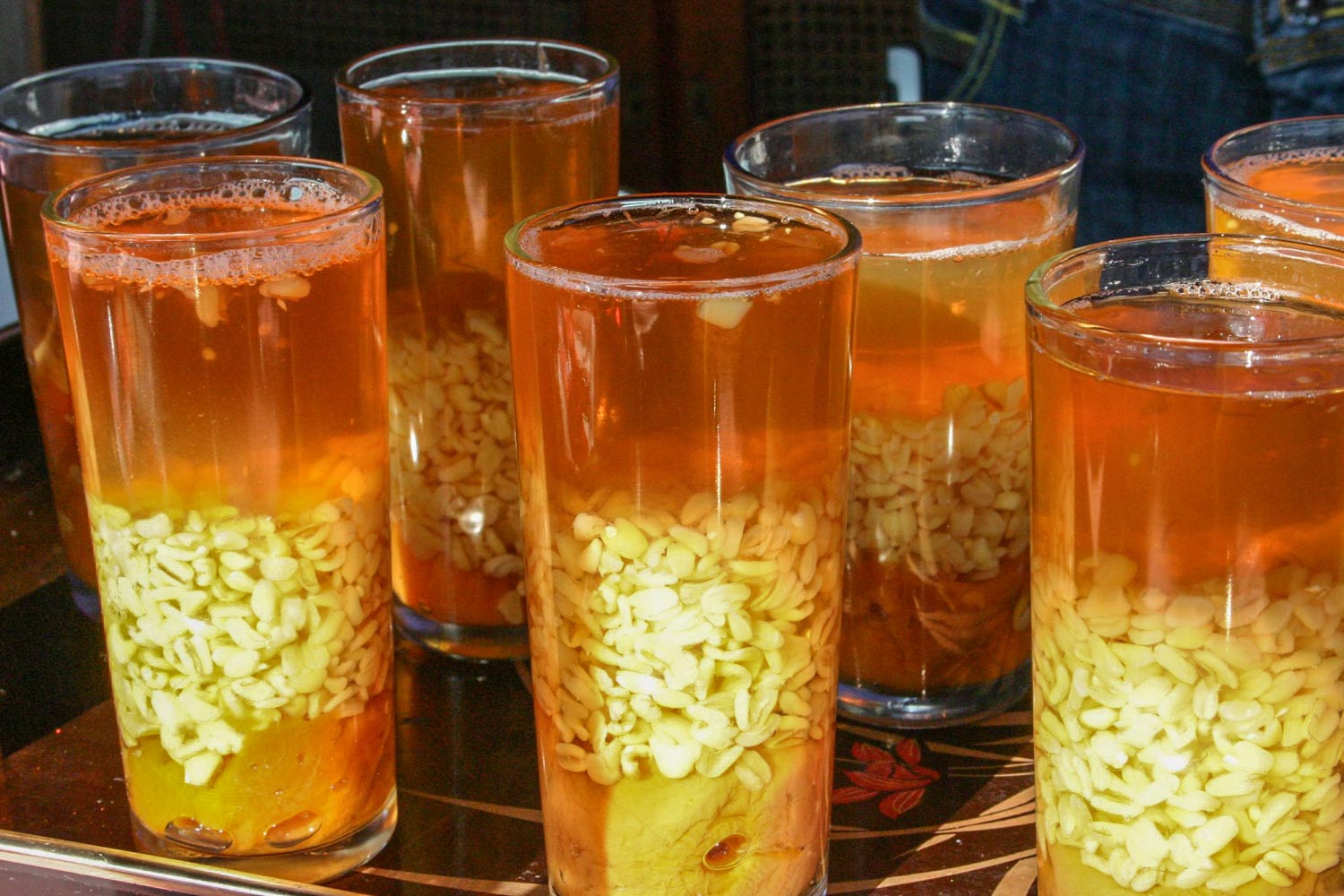 Like most places in Latin America, Chilean cuisine involves lots of great sweet treats but I think these Chilean desserts will surprise you.

Mote con huesillo is a sweet tasty explosion of flavours.

This Chilean summertime tradition can be found on most street corners during the warmer months.

A non-alcoholic beverage, it is mixed together with a huesillo (dried peaches) nectar, then cooked in sugar, water, and cinnamon.

Finally, it is mixed with fresh cooked husked wheat and served cold.

Another summertime delicacy, this sweet dessert originated from southern Chile.

Made with quince, a tree which bears pear-like fruit called pome.

It is mixed together with sugar and Chilean guava berries for a nice fruity treat. 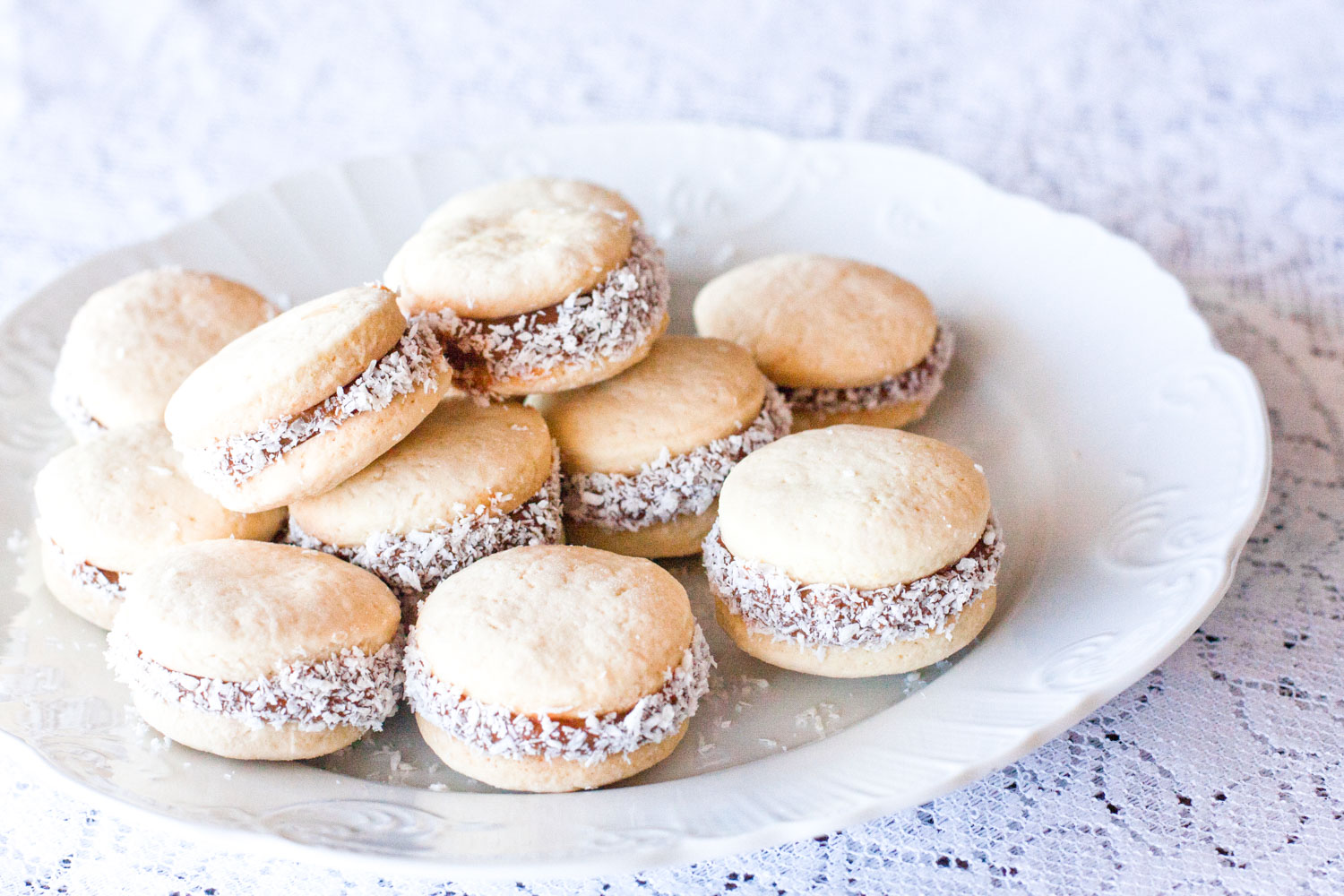 This is a cookie that is most famous as a food in Argentina, but is very common in Chile as well.

It is often coated in dark or white chocolate for which it got the Oreo nickname.