Nicaraguan food is more than rice and beans. Nicaragua is a country that has a wonderful variety in its cuisine.

Particularly in the coastal regions of the country, there is a distinct Caribbean influence in many of the dishes.

There is a great emphasis on making use of the local ingredients that are commonly available here, especially coconut.

Nicaraguan food was unexpectedly good and yet different from other Central American countries.

Along the coast you’ll notice some similarities to Jamaican food.

Immediately I noticed that refried beans were replaced with gallo pinto, and cabbage and yucca were much more prevalent.

Although McDonalds and other American fast food chains exist in some towns, locals are still eating traditional Nicaraguan food and it’s inexpensive and easy to find.

If you are planning a trip to Nicaragua, then here are some of the great foods and drinks that you should seek out to get an authentic taste of the country.

Tamales are a famous part of Mexican cuisine, but this version is found in Nicaragua and Honduras, and is made with a corn dough, then stuffed with pork, potato, pepper, tomatoes and onion, along with distinctive seasoning.

They are corn-based like Mexican tamales but they are not homogeneous as each bite may contain a number of ingredients from green peppers to olives, raisins and chiles.

I was excited to see the Nicaraguan take on tamales, I previously dedicated an entire post about them.

This Nicaraguan food originated in the Matagalpa region in the north of the country.

It is a type of tortilla that is made with young corn.

It has a sweet and thick dough that is cooked in banana leaves and then served with the local crumbly white cheese.

Plantains are common in this part of Central America. Tajadas are simply slices of plantain that are cut either horizontally or vertically and fried.

This Nicaraguan food can either be served with a little white cheese as a snack, or can be a side dish in the main meal.

They are often sweet in Nicaragua.

Very similar to tajadas, tostones are usually prepared with plantains that are not yet ripe.

These green plantains can be sliced or pounded before they are deep fried, and have a more savuory tasty than the sweeter tajadas.

A mixture of rice and beans (appearing above in breakfast), most Nicaraguans eat this almost daily and it is considered a national symbol.

It’s delicious but I ate this so often that after a few weeks I asked if I could have my rice and beans “separado”  for some variety.

Usually eaten as a Sunday meal, vaho is made with beef, plantains and yuca chunks.

It is cooked in banana leaves, and topped with a fresh salad of cabbage and tomato.

With a Caribbean coast and a Pacific coast, seafood plays an important role in much of the country.

Rondon is a stew that is prepared with a variety of different fish, along with peppers and vegetables that are cooked in a spicy stock prepared with coconut milk for a creamy sauce. 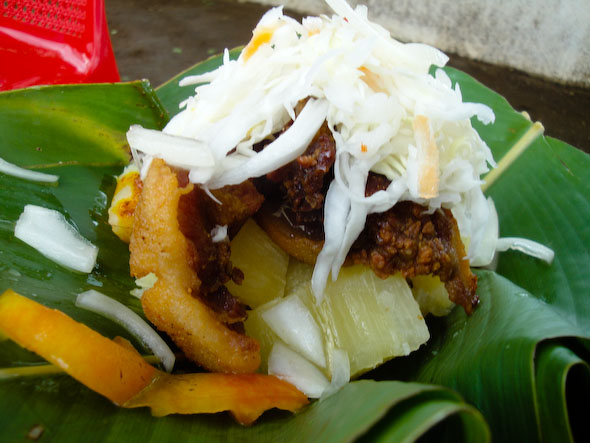 Originally from Granada, you can find this everywhere from street vendors to house parties.

Traditionally a plate is covered with a part of a plantain tree leaf, then topped with yucca, pork, topped chicharrón (fried) and a salad of cabbage and tomato salad.

Although I’m a pork lover and pork on pork sounds amazing, I have to admit I don’t really like chicharrón as it seems too salty and crunchy.

Combining a grilled piece of meat, usually skirt steak, with a green chimichurri sauce made with parsley, garlic, oregano and white vinegar.

This is very tasty and popular dish for visitors and locals alike.

Hardly unique to Nicaragua, but they do make a mean hamburger and for a dollar its hard to pass one up on the streets of Leon.

Oscar insisted there was only one good place to eat them, which was actual steak as the ground beef ones are often mixed with filler; but whatever that filler is, it’s tasty.

This dish is believed to have originated among the indigenous population of the region. It is very similar to the Cuban food ropa vieja.

It is made with sour oranges, tomato, pepper and achiote which creates a thick meat stew with a tasty sauce.

Found in most former Spanish colonies, this Nicaraguan food was originally brought over from Spain as a way of utilizing meat offal.

Similar to menudo, a popular food in Mexico, mondongo is a rich stew made with tripe.

It also uses cassava and sour orange, while it is often served with avocado and a tortilla.

Originally from León, it’s a simple dish but so tasty that restaurants are dedicated to selling only quesillos.

They say that the best are found on the highway between Managua and Leon, but I had them and did not notice a difference from those sold on the street in Leon.

A piece of cheese (which is named quesillo) is placed on a tortilla. Pickled onions, cream and salt are added to the top.

My advice would be to ask for “poco crema” as they are unnecessarily generous with the cream.

You can also get these rolled up and in a plastic bag, as we did for my 33rd birthday, a nice added touch was the chile sauce our vendor added which cut the excess cream flavour.

Rosquilla are lovely little sweet snacks that are made with masa flour. These little donuts are made with the local cheese queso seco added to the dough.

They are baked twice to give them a crunch, and they are excellent for dipping in the wonderful local coffee.

A popular fast food that is essentially marinated meat on a stick.

Carne pinchada is usually prepared in both beef and chicken varieties, and is marinated in a beer or wine sauce.

It is an indulgent treat, particularly during festivities and popular events.

A healthy Nicaraguan dish made with diced lean beef, onions and peppers.

This mish mash of meat and vegetables is given a generous squeeze of lime juice for a hint of citrus.

It is usually prepared alongside white rice and kidney beans.

This is one of the great dishes of Latin America, and in Nicaragua it is prepared with strips of beef that are cooked on the grill.

It is often at the heart of outdoor family meals and events in the country.

Although in Cuba they swear Cuban drinks are the best because of local rum, Nicaraguans would disagree.

Some of the best cocktails around the world are made with Nicaraguan rum.

Nicaraguan Flor de Caña, which has been around since 1890, is known as some of the best rum in the world.

And little known fact, it’s also one of the most popular Honduran drinks, as its second factory was built in Honduras over 50 years ago.

Only found on the Caribbean coast of Nicaragua.

This unique drink is made by boiling and mashing plantains, and combining the pulp with coconut water and a little sugar to make for a fresh and delicious drink.

One of the most popular beers in the country, it’s a simple easy drinking golden lager.

This is a traditional Nicaraguan drink that is made with sweetened cornmeal and cacao.

Pinolillo can be prepared fresh, but is most commonly purchased as a powder, which is then mixed with either milk or water.

Without sweetener many people trying it for the first time will find that the taste is quite bitter. 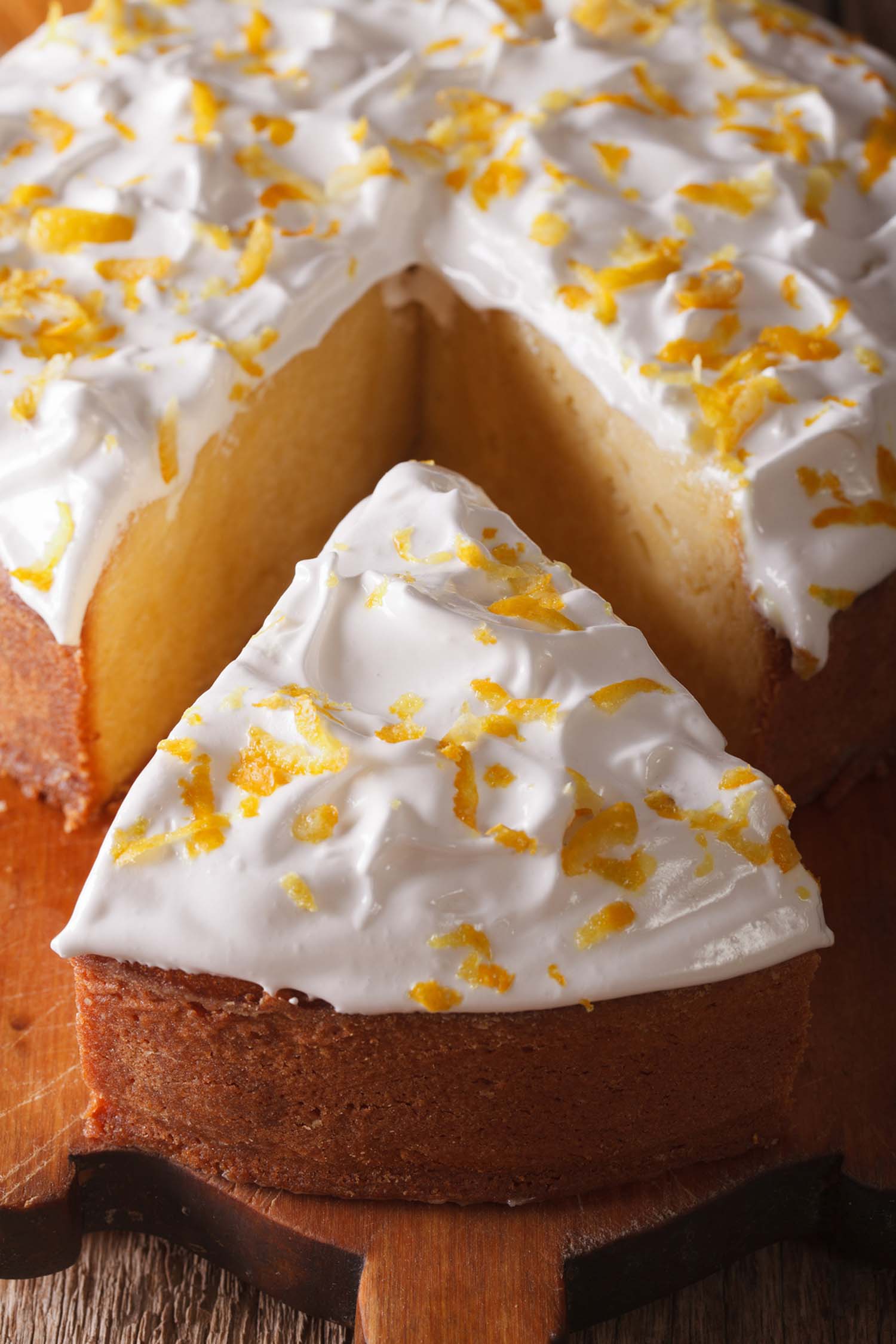 Here are some of the most popular Nicaraguan sweets. You can also check out this longer list of Nicaraguan desserts.

This is a dessert that is found in many areas of Latin America, is a common Peruvian dessert.

Made with condensed milk, evaporated milk and whipped cream. This Nicaraguan food is great for dairy lovers, and makes for a very sweet and moist cake.

The Nicaraguan version is a traditional recipe, similar to flan in Cuba.

Spanish speaking countries often have adopted the former colonial power’s love of custard as a dessert.

Here in Nicaragua, atolillo is the local variety, where eggs, milk and sugar are combined with cornstarch, and then flavoured with cinnamon and vanilla for a simple and delicious dessert.

Corn is one of the key ingredients in Nicaraguan food. This corn bread is sweet and moist. It often has a hint of cinnamon included in the dough.

A traditional Nicaraguan dessert that is a favourite with children and adults alike.

It is made with coconut and yuca that is sweetened and thickened with dulce.

It is formed into balls and cooked and then covered with grated coconut or sweet wafer crumbs.