Colima doesn’t get a lot of attention for its culinary side, perhaps it’s too close to the powerhouse of Oaxaca, which often steals the foodie spotlight. But there are so many things to eat in Colima.

It is in prime territory to have fantastic eats. It’s influenced by its neighbours in Michoacán and Jalisco.

But also its location in between two volcanoes and the jungle means land is fertile with plenty of sugar cane and coffee plantations, bananas, coconuts and plenty of exotic fruits.

While seafood is more common on the outer areas of the state, you’ll also find great pork and corn here. Colima food is varied and also great value.

Local restaurants are called “Cenadurias,” which means a place to have cena or dinner.

I love how everything just makes sense in Mexico.

But what also makes food in Colima so interesting is that it has a 3000 year culinary history.

Think of bit sized versions of tostadas so they are great for a snack or to share, as you’ll find 6 sopitos in small Colima restaurants for as little as 35 pesos.

Named after the city of Tuxpan in Jalisco, these tacos are only available for breakfast. Similar to canasta tacos they are steamed, then filled, folded and topped with sauce.

ALSO: 27 Awesome Things to Do in Colima Mexico

At the spot I visited you could but meat for 10 pesos. Chicharron, bean or potato tuxpeños were 9 pesos.

Whereas my 11am craving for orange soda was a relatively expensive 14 pesos but well worth it.

Known as flautas or taquito in other regions. These Mexican antojitos are rolled tortillas that are filled then deep fried and served in a sauce.

You can find these tacos everywhere.

Not unique to this region, you’ll find them as street food in the Yucatan and other regions.

Tortillas are deep fried and topped with bean puree, pork, veggies and salsa.

I visited Colima for the ATMEX conference and a local restaurant served this special tostada.

It was their interpretation of the local white posole on a taco and it was delicious but WOW that hot sauce was hot!

I almost always try a bit of hot sauce on the side before I put it on food and the one time I broke this rule I nearly burnt my lips off.

Fortunately local beer cooled it off.

The one above is with cueritos de cerdo, or pickled pork skin, which is very common in Colima.

Yet, it’s not for everyone, the texture is what you would imagine of pickled pork skin.

If you don’t care for it don’t worry sopes gordos also have other toppings.

Similar to what you will find in other regions of Mexico, these corn tamales are steamed in banana leaves.

The flavour is unique as pork lard is used along with local chihuilines fish from the river.

Deep fried pork skin is served in a red or green sauce. I had this dish for breakfast at Colima City bus station on the way to Manzanillo.

Let’s face it, pork rinds and refried beans aren’t the healthiest breakfast but I was full for hours. It’s a must try.

Another dish influenced by Jalisco. This is an ancient stew made with corn, chiles, garlic, tomato and is often with chicken. It’s the ultimate comfort food. 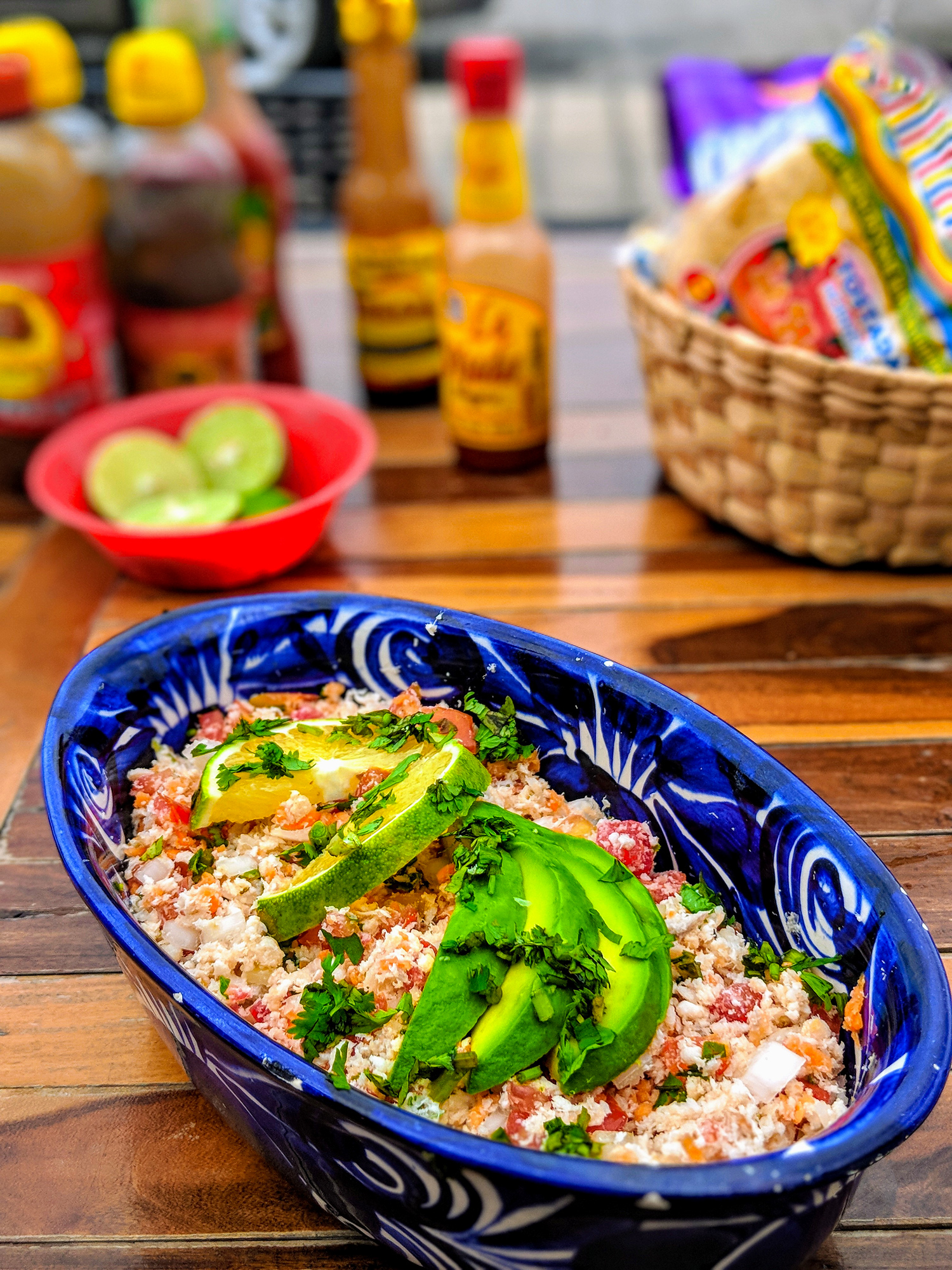 Ceviche is Colima is different than other regions as it uses ground fish that is marinated in lime juice and then drained producing a dry-style ceviche.

It’s often with dorado (mahi mahi) or red snapper but it can be made with any local fish.

It’s so common to make that seafood vendors often provide the ground fish for locals to buy so they don’t need to finely chop the fish themselves.

Manzanillo is almost famous for its smoked fish ceviche, another dish I’ve never seen anywhere else in Latin America.

I know you’re thinking, just how many pork stews can one small state have? But the truth is that they have many.

This pork and vegetable stew tends to be quite mild on its own, leaving diners to spice it up themselves with their own hot sauce.

It’s a filling meal served with rice and pickled onions. 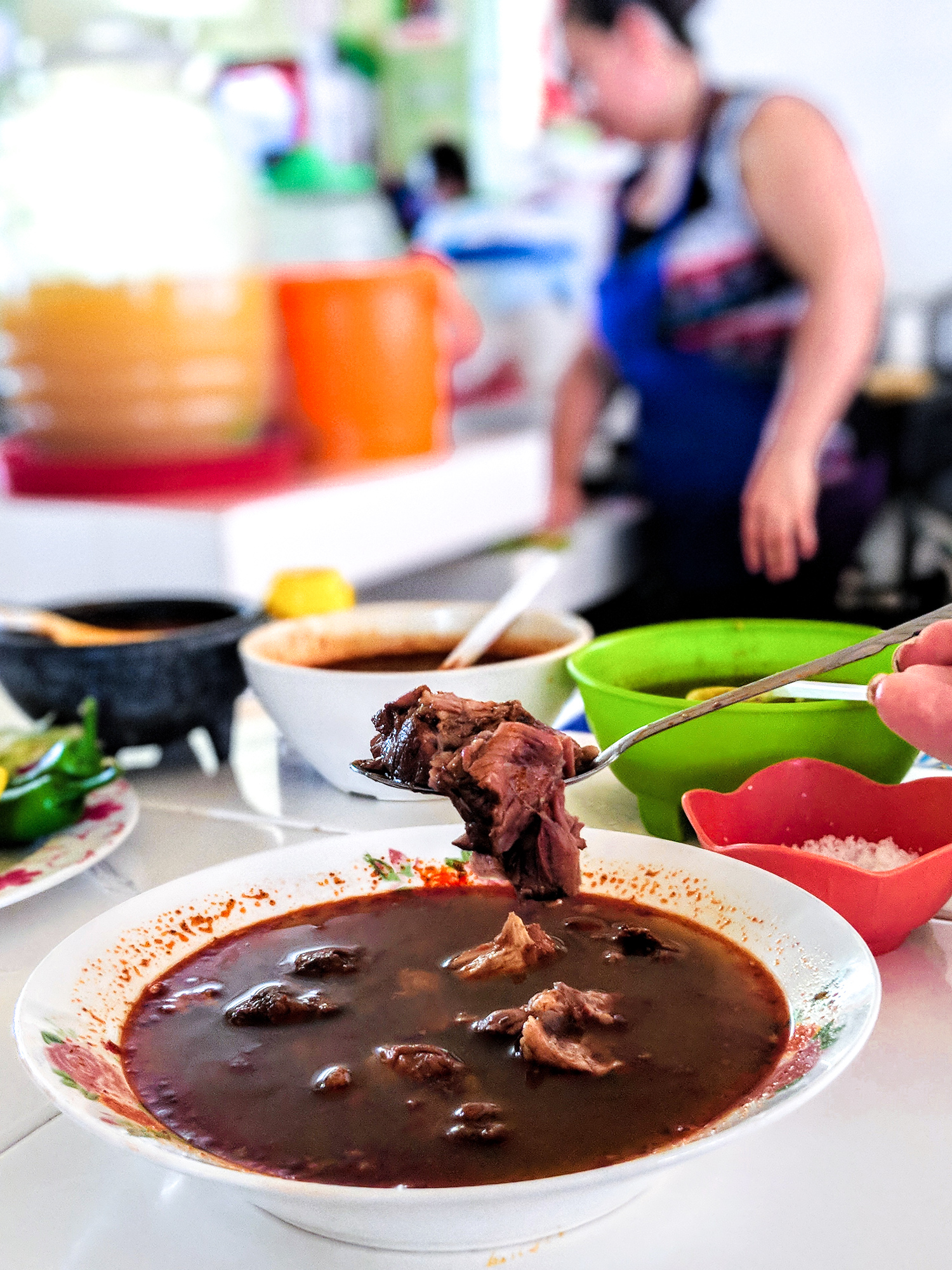 This light goat stew is found throughout Latin America and many regions in Mexico.

It is most famous in neighbouring Jalisco. In Colima it is also made with beef, when goat is not available.

I ate this at the Mercado Constitucion just a couple blocks away from the main square in Colima City.

On the menu they clarified that it was birria de res, or a beef birria.

Translates directly to beef in its own juice. This beef and vegetable stew is in a light broth.

A specialty of Colima, it is a dry white pozole, which has practically no broth.

Like other types of pozole (red, green and white – conveniently the colours of the Mexican flag) it uses hominy.

But in this case the hominy is cooked well done and appears to be mashed or pureed. It is topped with pork, lettuce, onion and radish.

Colimense food seems to be rare as I couldn’t find a recipe in English and there are only a few in Spanish.

Most of the Mexicans at ATMEX who were from Mexico City has never heard of this local Colima food.

This is a true Colimense recipe.

I know this description doesn’t sound appetizing but it is the ultimate comfort food. If you crave bangers and mash you will love this dish.

LEARN: How to Make Red Pozole

Often a late night or Sunday afternoon dish throughout Mexico, it’s not for the queasy as it’s a cow stomach (tripe) soup.

Mexicans swear that it will fight hangovers, which is often why some menudo restaurants in Colima open in the wee hours of the morning and run until noon.

One of my favourite things to eat in Colima and something I had before.

Pork is marinated in coconut vinegar, spices and herbs and then cooked in a clay cazuela pot with chiles.

It may appear similar to birria, but this is a true traditional Colima food. I ate this at Fonda el Meson in the Mercado Obregon in Colima City.

Highly recommended as the food was great and the women working were so sweet to me.

Slow cooked pork leg served in a spicy sauce. It’s most commonly found outside the city where pork is plentiful.

Although this pork leg is not unique to Colima, it is common in more rural areas.

This dessert is a famous Argentinean food but Colima has its own take on this sweet cookie by using local ingredients such as coconut, honey, peanuts or pineapple.

Soft fruit candies made from coconut, banana and other local product. You can find them on the street or in shops as a gift basket.

They are similar but a bit different from cherry balls.

While they are famous in Colima, and common Peruvian desserts, you can also find them in other Latin American countries, such as Brazil, Colombia, Dominican Republic and Venezuela.

Unlike traditional savoury empanadas, dough is stuffed with local tropical fruit puree and then deep fried and tossed in sugar.

While flan is common throughout Latin America, this one a bit more creamy and more similar to cheesecake.

A local custard dessert that is sometimes compared to creme brulee and crema Catalana, Jericallas were supposed invented in Guadalajara.

Legend says that a nun from the Jérica region in Spain created this recipe.

She worked in a orphanage and was concerned the children were not eating properly.

So she started creating a flan with eggs, milk and sugar – which children adored but also gave them more protein and calcium.

Sadly one day she burned the flan but children didn’t mind – thus creating this sweet treat.

What to Drink in Colima Mexico

Of course eating so much delicious Colima food I also needed to try traditional drinks in Colima, and thankfully there were so many.

A drink made with corn with a bit of vanilla and cinnamon.

A thicker drink made with what looks like chia seeds, but is actually chan which is more similar to a type of sage.

You can usually find this on Medellin street in Colima City.

The unique flavour in this drink in Colima comes from a base of fermented corn, molasses, cinnamon, salt and lime over crushed ice.

If you’re looking for something a bit stronger this traditional cocktail uses mezcal with local flavours such a tamarind, pomegranate, peanut or coffee.

This alcoholic drink uses sap from coconut palm trees are fermented then topped with toasted peanuts.

Colima is home to a couple local craft breweries. Cervecerias are also common if you’d like to try a wide variety of beer.

In the capital, Colima City, Hotel Ceballos, has a fantastic rooftop bar overlooking the plaza with plenty of options.

An alcoholic drink that ferments sap from local agave plants.

What Colima food have I missed? What other things do you love to eat in Colima?