A food haven, here are the best downtown Charleston restaurants that locals recommended.

Charleston has always been a food town but it didn’t come to the forefront of great American food cities until the critical acclaim of Chef Sean Brock’s Husk.

The spotlight on Sean Brock shines so bright it leaves other downtown Charleston restaurants in dark shadows.

And that’s a shame because there is so much amazing food to eat in this city.

Charleston is much more than just one restaurant so if you can’t get a reservation at Husk there are many other amazing places to eat in Charleston.

Charleston is the second most popular wedding destination next to Las Vegas and it’s not surprising at all.

Downtown Charleston is beautifully colourful and its vibrance is reflected in its citizens.

Charleston may contain the friendliest locals in America.

People who pass by on the street say good afternoon and cyclists on sidewalks ask how you’re doing.

Restaurant service is always polite and it seems to be a born and bred characteristic of Charlestonians.

But it’s also why there is a pineapple fountain on the waterfront as it’s a sign of hospitality,

That said be careful when you cross the street.

I don’t believe pedestrians have the right of way and locals jay walk with extreme caution.

I say this because you’ll need to walk plenty, three meals are not enough in the Holy City.

Harold’s Cabin is most talked about because Bill Murray is one of the investors.

But the real reason to go is their vegetable-forward menu which includes the “forage board.” It is a charcuterie style vegetarian board. I loved everything about Harold’s Cabin.

Harold’s Cabin is located outside the downtown core and is more of a neighbourhood restaurant.

Fantastic service in a laid back atmosphere. I loved sitting at the bar and meeting locals.

It’s very easy to get caught up in the newest/hottest restaurant but FIG has been around for 14 years in Charleston and was cooking local food before it was trendy.

It’s still considered amongst the best downtown Charleston restaurants and you’ll find a lot of cooks here after their shift.

While they don’t take reservations at the bar it’s worth eating here as you’ll find the most interesting dining companions.

With great spins on traditional dishes with local ingredients like Carolina gold rice and benne seeds.

Don’t worry that sitting at the bar means less meaningful service as the bartender, Andrew, knows how everything is prepared. 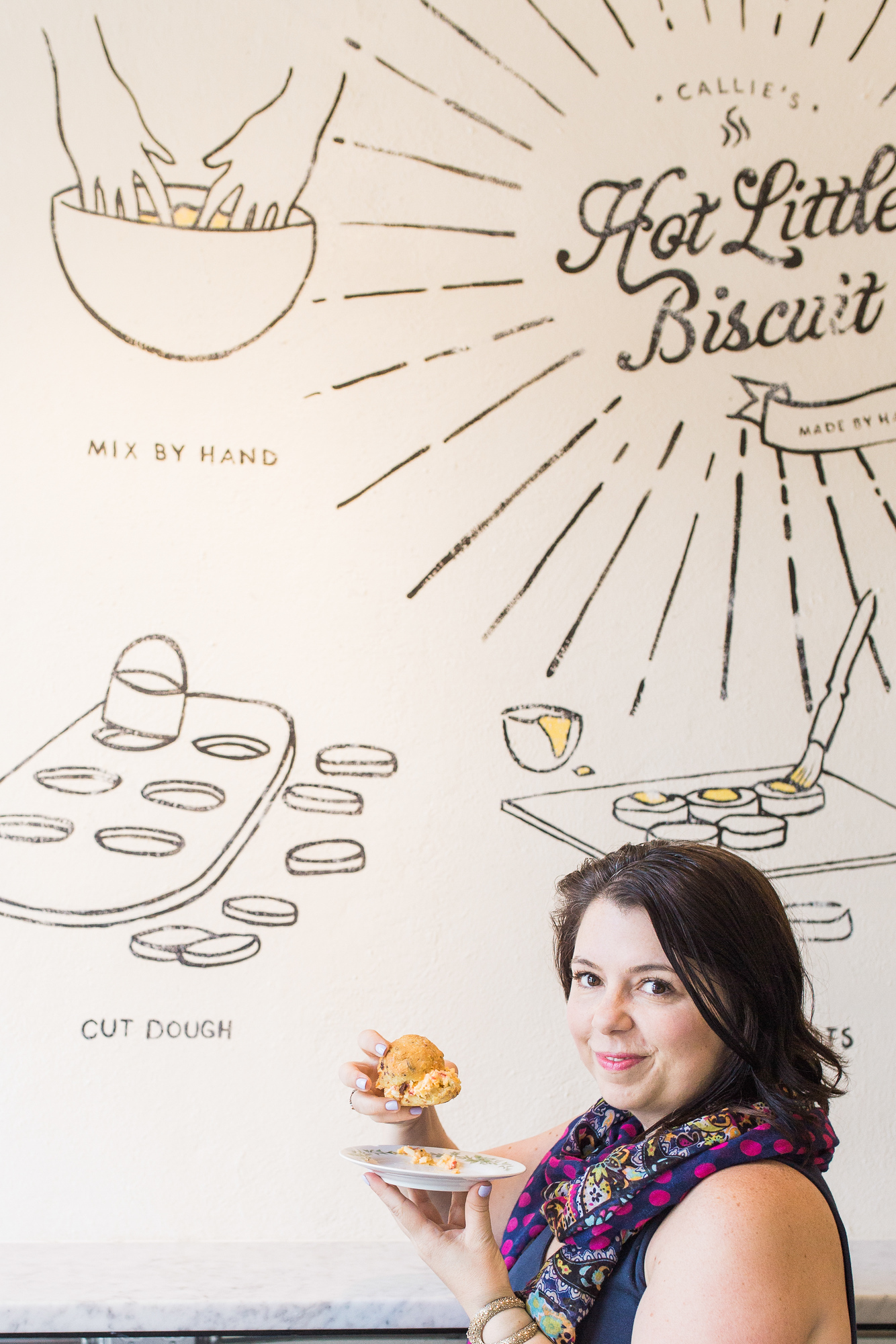 Calli is famous for her frozen biscuit dough, but this biscuit shop takes it to a new level with fillings, sandwiches and flavoured butter.

You must buy two but these dense pockets are perfect to share as a snack. I chose the chive and cheddar, with the pimento cheese butter – because when in the South you must be pimento.

Callie’s is packed on weekends but also open until 2am to soak up some of the craft beer you’ve been drinking.

Far from a hidden gem, this kitchen has been covered in everything from the New York Times to Saveur.

dIt’s a 20-seat cabin with 20 white plastic seats and tables but no one comes from the decor.

The tiny kitchen is prompt and guests rave about how this is the best fried chicken they’ve ever had.

The location was once out of the way and so it offered delivery.

Times have changed, the Butcher and Bee and Edmund’s Oast moved across the street and now North Morrison Dr is now fashionably known as “NoMo.”

You’d be surprised at how servers deftly maneuver 26 seats in this tiny space.

The four seats that look into the kitchen are on a first-come basis but there are also 12 seats at the bar, some overlooking the shucking station.

LEARN: How to shuck and oyster with a hockey puck.

167 Raw is definitely the new hot place in town and while there’s a full raw menu most patrons oddly seemed to order fried goods while I was there.

While Monday is as busy as Friday one of the servers told me the best chance at seating without a line is Tuesday between 3-5pm.

The Artisan Meat Share was originally a charcuterie CSA for the area and evolved into a sandwich bar/deli in 2014.

The cures were originally a side project by Chef Craig Deihl, not wanting to discard secondary cuts while learning whole animal butchery.

LEARN: How to Make Pancetta at Home

The original philosophy of using the whole animal continues as fried pork skin (chicharron) is also available in addition to cured salamis, whole muscle and mortadella.

If you aren’t in the mood for meat check out house specials like the hot fish sandwich.

I didn’t jump on the cupcake bandwagon but I dig a doughnut every now and then.

Dough is made in house and it’s never frozen so if you show up late like I did you may miss your favourite flavours.

The apple bacon strudel is fantastic. I also took a chance on the vegan doughnut, who knew vegans couldn’t eat doughnuts – sadly it was more like a muffin, sorry vegans!

Husk was good but not great. Everything was cooked well, service was great, the interior was lovely.

There was nothing to complain about but also nothing to rave about and perhaps that’s why I found it disappointing.

I learned that it’s not a restaurant that locals often frequent but instead busy with tourists wanting to try a nationally acclaimed restaurant.

Appealing to a mass audience is difficult but they do it well with so many great reviews. If I had to do it again I would pass.

Although Dixie Supply Bakery Cafe was featured on Diners Drive Ins and Dives it has a simple no frills exterior so most tourists pass by without knowing it has some of the best food in the city.

The tomato pie is gorgeous.Slices of fresh heirloom tomato and cheese, it’s light enough for the Charleston heat but comfort food so delicious you’ll want to make it at home. 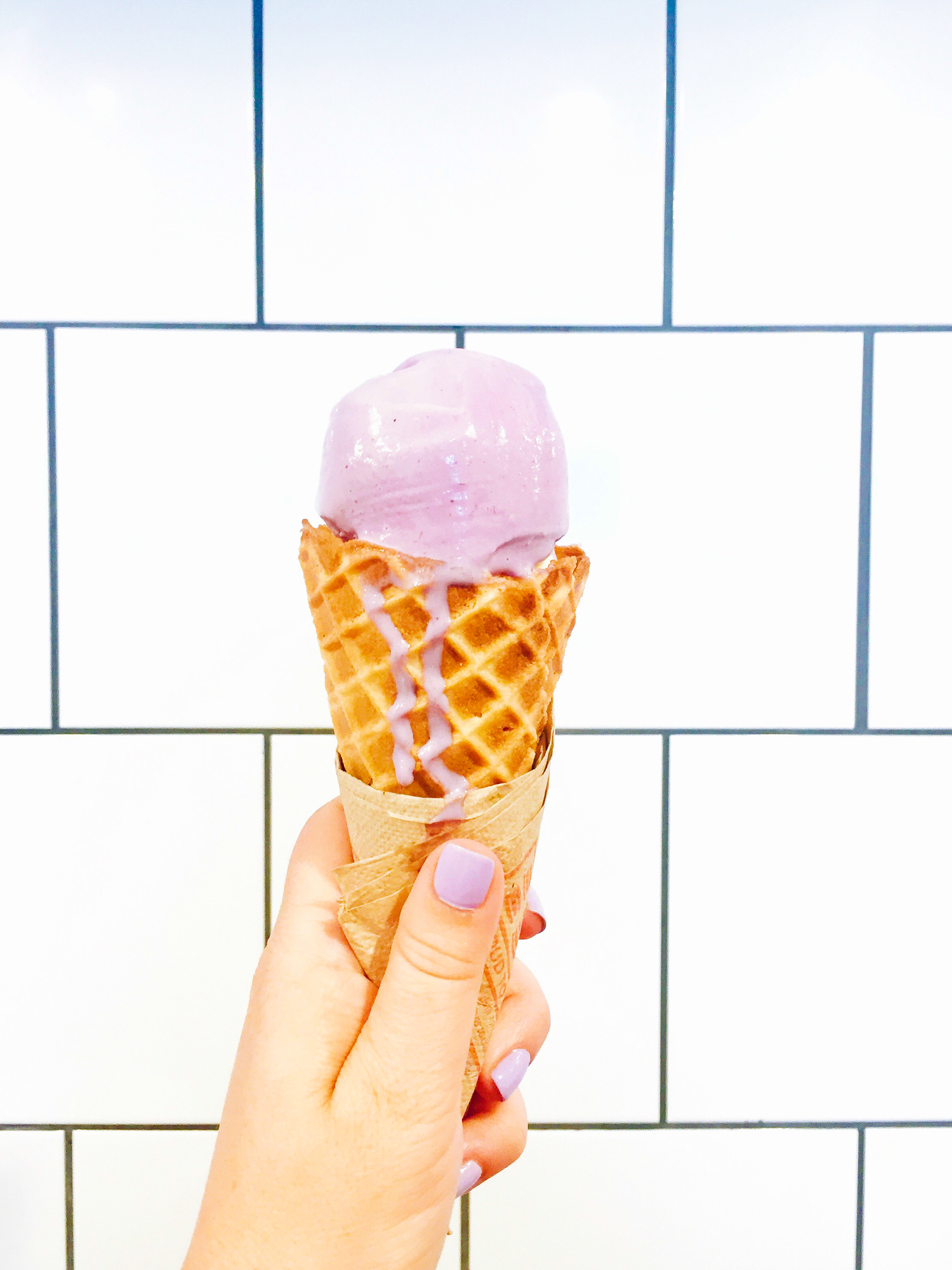 While it’s not a local business, this instagrammable treat fits right in on trendy King St, just doors down from Glaze and across from Callie’s Hot Little Biscuit.

I chose the wildberry lavender because it matched my nails but was treated to a childhood throwback –  fruity pebbles flavour.

Underneath was sun popped corn, which blew my mind.

Located in an old garage, Leon’s has all the charm you want in a restaurant that is a 15-minute walk outside the downtown Charleston restaurants core.

It is a peculiar blend of oysters and fried chicken with champagne on the menu and rosé on tap.

Charred oysters are a great choice, served with toast and thoughtful muslun-capped lemons.

I wanted to love the freshly shucked oysters but 4 of 6 were still partially attached.

I would still return and chalk it up to the shucker having an off afternoon.

Part of the same restaurant group as Chef Sean Brock’s Husk, I nearly cancelled my reservation as I thought the menu looked similar to Husk and I was looking for something more adventurous.

But the menu is deceiving as McCrady’s is its own distinct restaurant.

While it initially feels like formal dining, the sound system blares a mix of music that ranges from hard rock to A Tribe Called Quest.

Food is interesting but service isn’t too fussy. I highly recommend the forest floor if it’s available. 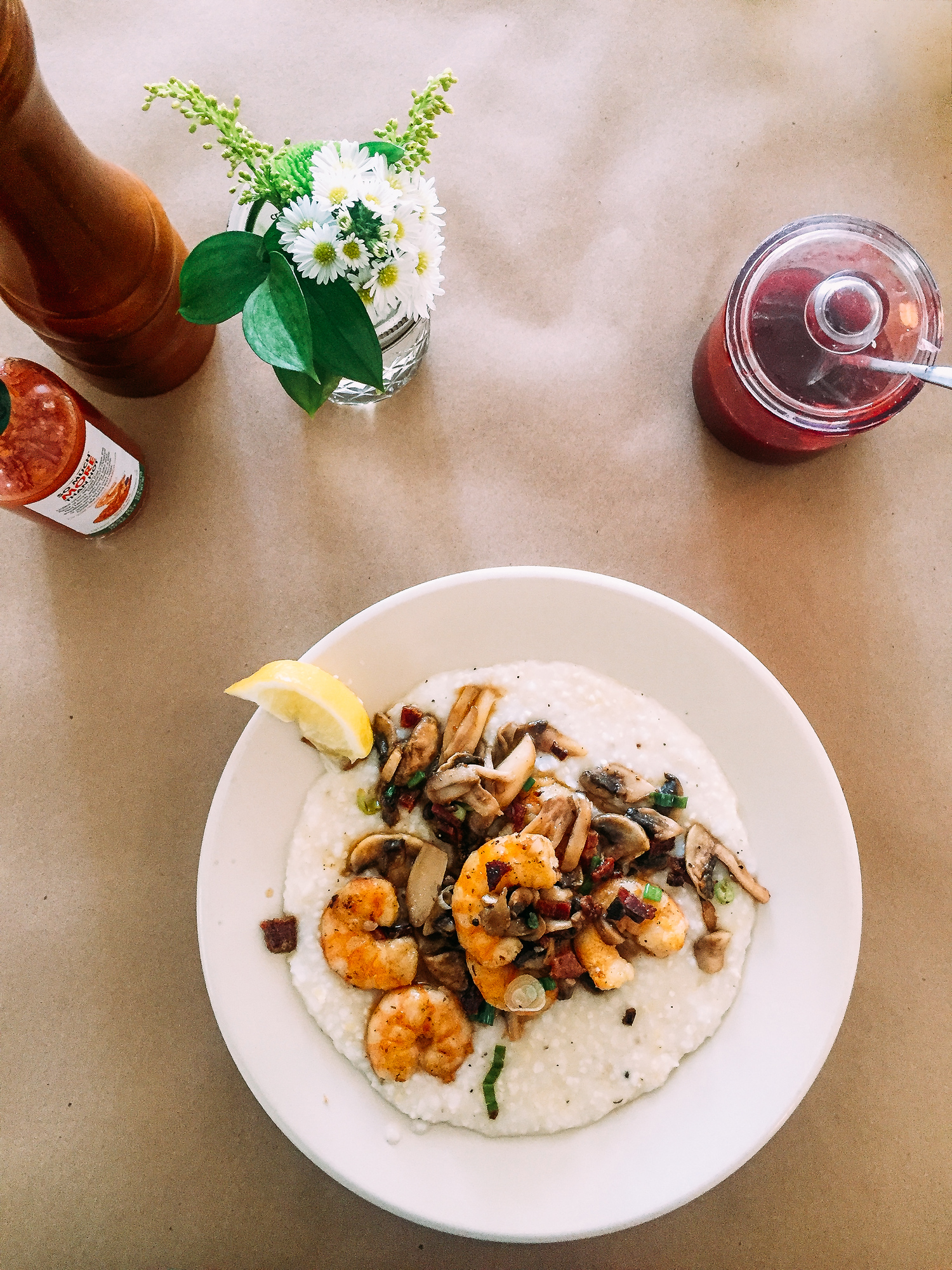 The Homing Grill is a bright, love cafe with both tourists and locals from the neighbourhood.

The “thing” to get her is the Charleston Nasty Biscuit with fried chicken, cheddar cheese and sausage gravy.

I opted for the lighter (?) shrimp and grits with scallions, mushrooms and bacon.

You’ll want to take a walk afterwards as the food is filling.

A few years ago laws changed so that breweries could also house a place to drink. This spurred massive growth in craft brewing in Charleston.

Edmund’s Oast is the largest, most prominent brewery in Charleston servings its own craft beer as well as many other local beers.

It also has a great happy hour and makes everything from scratch, including house cured meat.

This brewery could be included on this downtown Charleston restaurants list for the food alone.

Established independent restaurants I went to many restaurants that are currently getting a lot of hype but my favourites were the local tried and true.

On my next visit I’d like to visit more of the mom and pop type shops that aren’t trying to be the best in America, just to cook great food for locals like they’ve always been doing.

Everything in the West Ashley Without a car I stuck to downtown Charleston restaurants but I heard of so many great restaurants in West Ashley including the Glass Onion.

The Ordinary Oysters are found all over Charleston but I heard from several people that the best were in this new seafood restaurant that is in a former bank.

Big thanks to Click Chick Photography for taking me out one afternoon for photos and being such a great tour guide, I wouldn’t have discovered Dixie Supply Bakery without it!

What best downtown Charleston restaurants did I miss? Where should I go next time?

Disclosure: We created this downtown Charleston restaurants guide in a paid partnership with Visit the USA; however they did not dictate editorial. They simply arranged for my flight, hotel and allowed me to go wherever I chose. I researched and booked all of these great places on my own and I’m happy to recommend them.

Want more city guides? Check out where to eat in these American cities.

Where to Eat in San Antonio