Not a fan of flan? This Cuban flan recipe will change your mind – and it’s naturally gluten-free!

The truth is that I’ve never really liked flan. I’ve eaten it in Spain and throughout Latin America but it’s usually because I’m at someone’s home and don’t want to be rude.

But really it’s usually a water mess drowning in syrup.

But Cuba changed all of that. And it’s because the Cuban flan recipe is different, which makes it delicious.

If you’ve been following along throughout the years I profess to dislike dessert.

It’s true I’d rather cheese or another glass of wine instead of something sweet.

But of course I love creme brulee, who wouldn’t love that cooked custard with the crunchy top.

It’s basically the same recipe but with a smooth creamy brûlée.

The Cuban Table: A Celebration of Food, Flavors, and History
A Taste of Cuba: A Journey Through Cuba and Its Savory Cuisine
Cuban Flavor: Exploring the Unique Places, People, and Cuisine

It doesn’t matter where you go, a restaurant always has flan. The best Havana restaurants make it themselves because it’s such an easy Cuban dessert.

I’ve been looking for a Cuban flan recipe for a while, but had never made it.

During my Cuba Explorer tour I opted for a private cooking class in Trinidad.

It was an amazing way to spend the way as I learned how to make so many delicious things.

Because it was a private class I was able to choose what Cuban food I wanted to make for an appetizer, main and dessert.

I knew right away I had to learn how to make Cuban flan.

The History of Flan is Far from Boring

Okay I understand that not everyone cares about the history of food.

But I find it so fascinating, especially when you see some dishes in multiple countries.

In a sappy way I think it shows that we are far more alike than we think.

You may have thought that flan was a Spanish dish and the conquistadors brought it to Mexico, Cuba, Brazil and Costa Rica.

But you can also find flan in Vietnam, France, India and Japan – although by different names of course.

Flan is as old as Roman times, and in fact they think flan is actually a Greek recipe that the Romans borrowed.

Back then the Greek were known to be far better cooks than the Romans.

At that time flan was not the sweet Cuban dessert we’ve come to love. It was actually savoury and made to eat with meat, and often eel.

Back in medieval Roman times they said it was an aphrodisiac.

Maybe that’s why Latin Americans are so lovely.

Spanish nuns are credited with turning it into a tasty sweet dessert.

It’s an affordable and simple recipe, and it turns out the world loves plain custard with caramel on top.

Flan is basically a caramel custard that is cooked and cooled.

It is the base recipe, from which basically any flavour – savour or sweet, can work.

The base of it is so easy that everyone was shocked I had never made one at my casa in Havana.

Especially as the flan Cubano version only uses 5 ingredients.

Names for Flan Around the World

And in England flan is a totally different dessert that looks more like a tart. 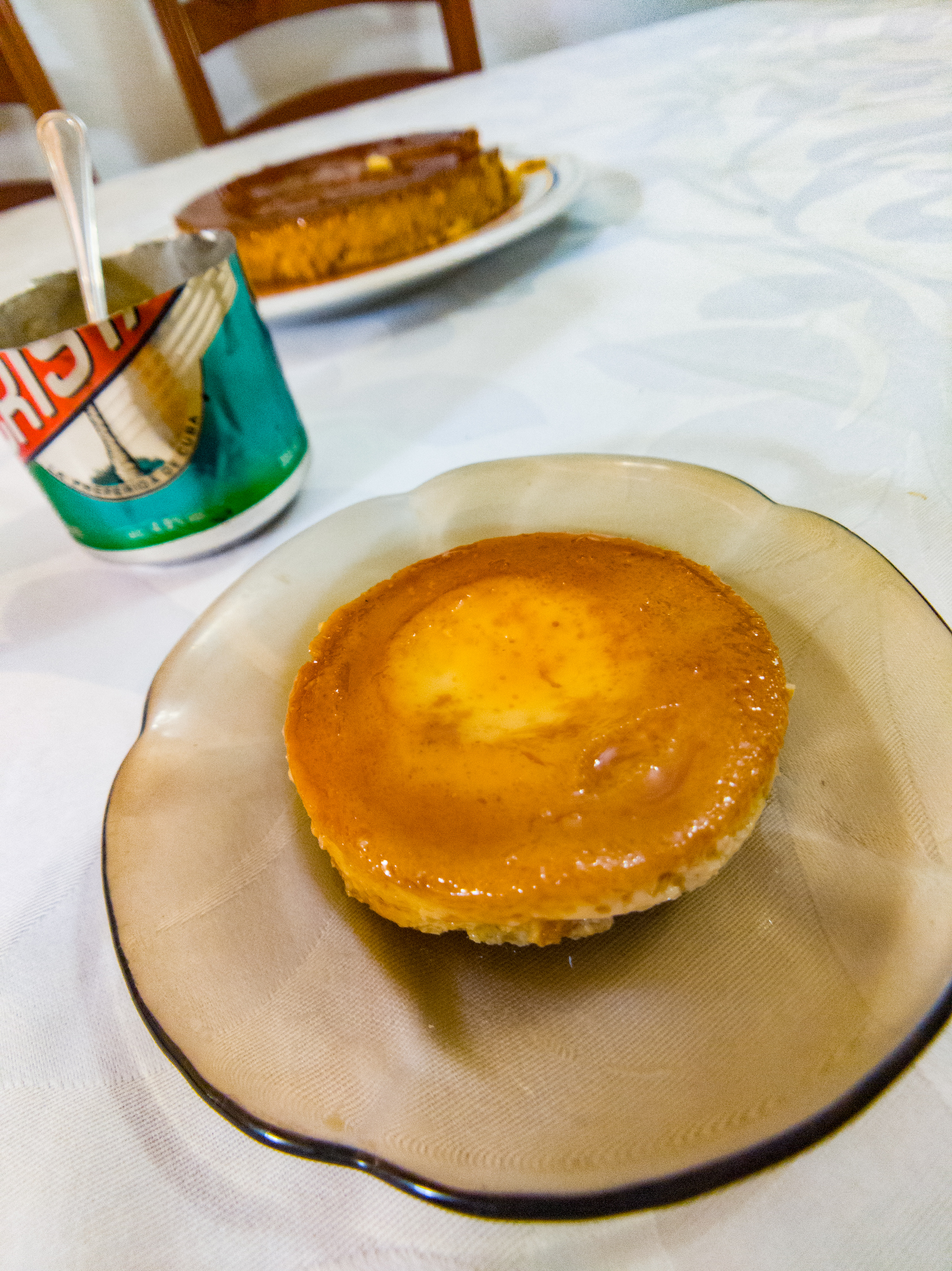 Why Cuban Flan Recipe is Better than Mexican Flan

What initially endeared me to Cuban flan was not the recipe but how it was served in the streets.

While Cuba doesn’t have the best recycling program but Cubans are amazing at reusing.

Being based in Cuba means I’ve seen this first hand. Once I was at the Havana beach with friends and we didn’t have cups to drink rum – no worries!

A friend took the can of beer he just finished, cut it in half and folded down the sharp sides.

So when I saw beer cans at a local restaurant in Havana I needed to know why!

When someone orders a flan they just tip the can over onto the plate.

It may also have eggs and may have a texture more like cheesecake than flan.

Often times this is called a flan de queso or cheese flan.

Part of the reason flan around the world is so different is the availability of ingredients.

Cuban food is different because of the struggles with keeping a steady availability of fresh ingredients.

You can get cream cheese in Cuba, but it’s not always available. Also, milk is a prioritized ration for children in Cuba.

So while you can find it, it’s not always easy.

But this is where the Cuban recipe for flan wins – because the custard is thicker and creamier.

It’s an easier flan recipe because it never has the opportunity to curdle like fresh milk-based flan.

I’ve always felt that flan in other countries was too light, sometimes rubbery?

This isn’t the case in Cuba.

If you’ve never used canned milk before, you need to know the difference because buying the right ingredients is crucial.

The Difference Between Condensed Milk and Evaporated Milk

Curiously I have seen some recipes from the United Kingdom reference condensed milk and evaporated milk as substitutes for each other.

They are both forms of milk preserved in a can and have lost 60% of their water volume.

They both have a shelf life of about one year.

However, they are different.

The confusion is that in some countries evaporated milk is sometimes called unsweetened condensed milk.

Evaporated milk is regular milk that is vacuum processed so that 60% of its water has been evaporated while maintaining its nutrients.

Evaporated Milk Substitute: To create one cup of evaporated milk simmer 2.5 cups of 2% milk until it is one half the volume. Allow to cool.

Condensed milk is milk combined with sugar, then heated until about 60% of the water is cooked off.

It is very sweet.

In fact, if you cook a can of condensed milk, you can turn it into the Argentine treat dulce de leche.

As condensed milk is sweet from sugar and evaporated is not they are not equivalents.

Condensed Milk Substitute: Heat 3/4 of white granulated sugar for every 5oz of evaporated milk to create a substitute for condensed milk.

I didn’t realize how simple flan Cubano was until I took the Cuba Explorer Tour with Intrepid Travel.

It was 10 days touring the country, and while I’ve been based in Havana I haven’t seen lots of the country.

Most people don’t realize that but it’s by far the largest country in the Caribbean. So while I have a good sense of Havana, the country is so much more than that.

But I’m getting off topic, back to the Cuban flan.

I sat in Milagro’s kitchen while her family taught me how to make 6 or 7 dishes and of course the classic Canchanchara cocktail.

But when they showed me that the Cuban flan recipe was mostly just putting ingredients in a blender and baking it I was blown away.

How could this smooth creamy delicacy be so simple?

Well it’s not entirely easy peasy. You do need to learn how to make the caramel but it’s not as difficult as it seems.

How to Cook Caramel

The most delicious part of Cuban flan is the caramel that tops the cooked custard.

If you’ve never made caramel before be warned that it does take practice to understand what is caramelized sugar and when you’ve burnt it.

Once the sweet mixture looks like a caramel brown it is done. It may slightly smoke, at that point you know you’re done.

There are two ways to make caramel. Often referred to as wet and dry. Wet is easier but I learned the dry method and it wasn’t that hard.

How to Cook Caramel Without Water

Shake the pan gently every so often. And it will begin to brown and caramelize.

After 6-8 minutes it will look like amber maple syrup or peanut butter. If it reaches the smoking point you know you’re definitely done.

Do not let it burn as the caramel will taste bitter.

Place your caramel in the mold and tip it back and forth to coat the bottom. Let cool.

The same method as above but with a tablespoon of water sprinkled over top the sugar.

Do not stir, but shake the pot and the water It helps you decide how caramelized you want it to be as the water evaporates.

But this is not necessary.

Back to the flan. It is cooked in many ways in Cuba depending on what the household has in the kitchen.

Some people don’t have ovens so they cook it on the stove top with a bain marie.

A flanera is a traditional flan cooking pan. It’s not necessary but it does make it easy.

If you live in Miami it’s easy to buy a flanera, but outside it’s not as easy so thankfully there’s this one on Amazon.

But if you don’t plan on becoming a flan professional there are many other ways to cook it including:

There are a million different types of flan de leche around the world. I’ve had it with green tea, lavender and even pumpkin spice.

There are many variations with Cuban fruit. One of the most common flan variations is orange.

And some people also serve it with local Cuban fruit.

1. Over medium-low heat, add white granulated sugar directly to a thick bottomed pot. Shake the pan gently every so often.

2. After 6-8 minutes it will look like amber maple syrup or peanut butter.

3. Place your caramel in the mold and tip it back and forth to coat the bottom. Let cool to room temperature

3. Pour into cooled flan pan or ramekins. If using ramekins, place them in a baking or casserole dish with high sides. Pour hot (not quite boiling) water around the ramekins then add the flan into the ramekins and put into the oven.

4. Place in oven for 35-40 minutes or until done. The centre should jiggle slightly and if you insert a toothpick it should come out clean.

5. Cool on counter to room temperature and then put in fridge.

6. Keep them in cooking vessel until ready to serve. Take a sharp knife to run around edge of flan to loosen from pan. Place a plate over top and flip over to plate. Shake the plate a bit to loosen a bit more before removing pan/ramekin.

Pin it For Later: Flan Cubano