These crispy Instant Pot carnitas are such a great idea for groups and parties. Serve them on tacos, soft buns or on its own.

What I love about traditional Mexican recipes, especially Mexican pork recipes, is that Mexicans know how to cook for a lot of people.

Every Sunday in Felipe Carrillo Puerto I went to a friend’s house where he and his extended family spent all day preparing food, eating and drinking.

Sometimes by the time we sat down to formally eat, we had already eaten so much all day I wasn’t even that hungry.

But you had to eat because the main dish had been cooking all day. In this case it was usually being cooked underground in the backyard in a pib.

It is cooked until it is so tender that it can be shredded with two forks and then served in a variety of ways.

But unlike cochinita pibil it doesn’t have the typical Mayan flavouring of achiote. Both slow cooked pork recipes are great – just different flavours.

What I like about Instant Pot carnitas is that it’s a great make ahead dish so it’s perfect for entertaining.

You can cook the pork in the Instant Pot the day before and half an hour before everyone arrives you throw them in the oven to crisp up.

It’s really a great dish for a crowd or smaller appetizer Mexican antojitos.

But I’d be hard pressed to name my favourite Mexican pork recipe. I don’t have children but it feels like naming my favourite child.

They’re all good in different ways. 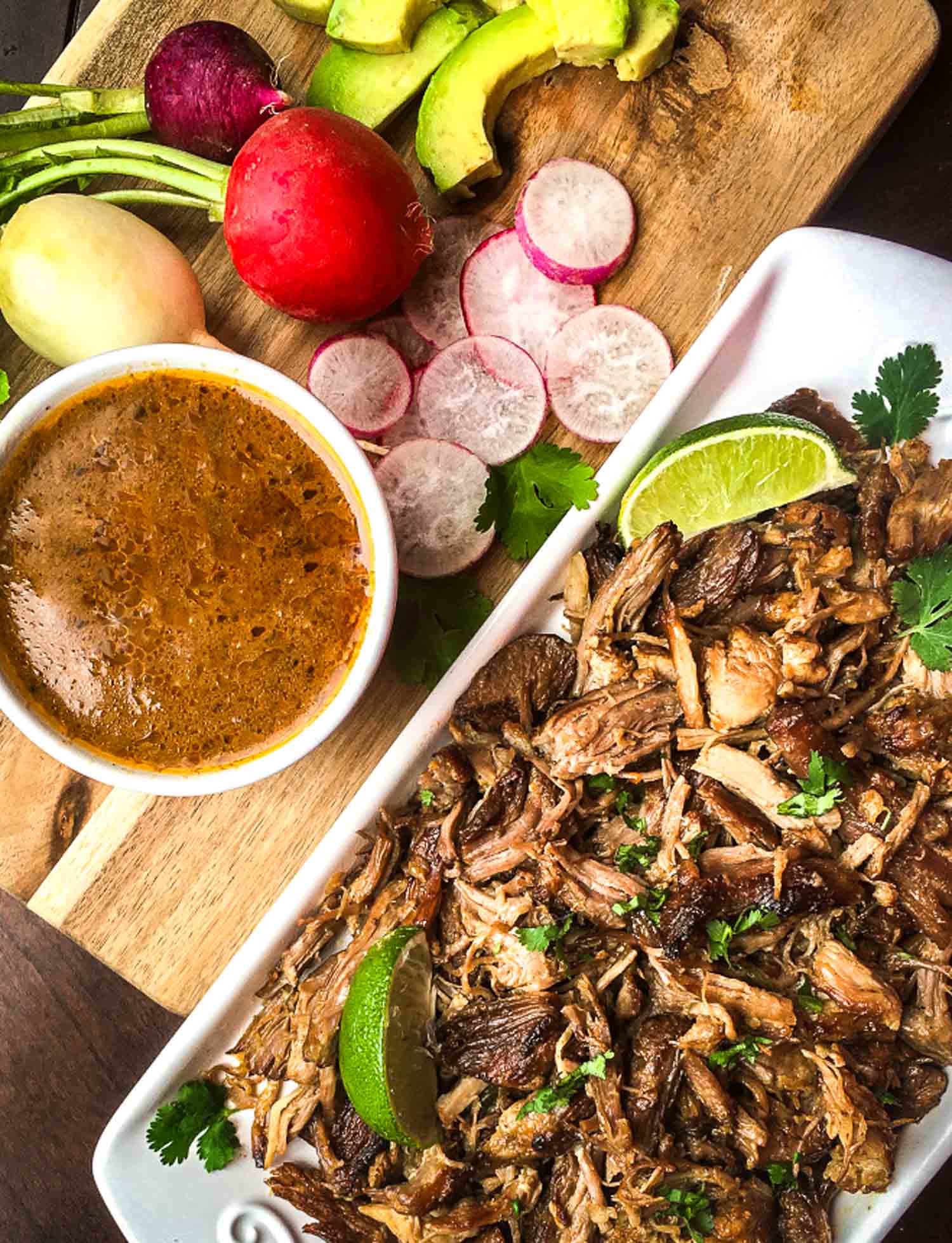 Is this an Authentic Pork Carnitas Recipe?

I think it’s important to tread a fine line between being authentic and not having to buy a bunch of ingredients to try a recipe for the first time.

Using an Instant Pot is modern authentic. Traditionally carnitas are slow cooked in a copper pot.

Sure it’s the best way but who has time for that? Pressure cooker carnitas are perfectly acceptable.

Mexican cooks are masters at using pressure cookers. I cook with this affordable Instant Pot.

It isn’t the newest but I haven’t found a reason to upgrade in the last three years for buttons I know I won’t use.

30 DISHES NOT TO MISS:
Food in Mexico

Generally both Mexican and also Cuban food call for sour orange, or naranja agria which is Sevilla orange juice.

You can buy it here or substitute a mix of orange juice with lime to get a sweet sour flavour – which is what I have done in this recipe.

Carnitas recipes vary from house to house, some people use cinnamon or bay leaf as well.

How to Use Leftover Pork Carnitas?

The great thing about this recipe is that pork carnitas can be used so many different ways in:

How Long Do Carnitas Last in the Fridge?

Can I Freeze Carnitas?

Yes, it’s best if you know how much you want to freeze in advance so you can set it aside before you put it under the broiler as you can broil it later.

Put into an airtight container with some of the cooking liquid to keep it moist.

It will last for up to three months.

What if I Don’t Have an Instant Pot?

You can cook it in a slow cooked for 6 hours in low and broil in the oven. Or you can cook in a dutch oven in a 300F oven for 5 hours.

I’m team corn tortillas, I love the flavour they give when they are warmed. But I am also aware they aren’t perfect.

They are a bit more fragile and can break, which is why they are often served doubled up.

Flour tortillas don’t have the same great corn taste but they are a bit more durable. So I say it’s up to you!

Do I Really Need to Brown the Pork?

Sautéing the pork in the beginning does help to create flavour early on with the boneless pork shoulder. But so does crisping it up at the end on a baking sheet.

It’s a nice additional step but I really debated whether I should remove it to make this recipe easier and you can still have delicious crispy carnitas.

One of the easiest Mexican pork recipes that makes perfectly shredded pork carnitas. They are keto, paleo, Whole30 and gluten free diet friendly.

This means, unless you have vegans and vegetarians show up, they are perfect for a party, barbecue or picnic.

Start in the pressure cooker to make it tender and juicy then finish in the oven to make the best crispy pork.

Serve with pickled onions, pico de gallo, guacamole and all your favourite sides.

If you’ve made this Instant Pot carnitas recipe let me know what you think in the comments below!