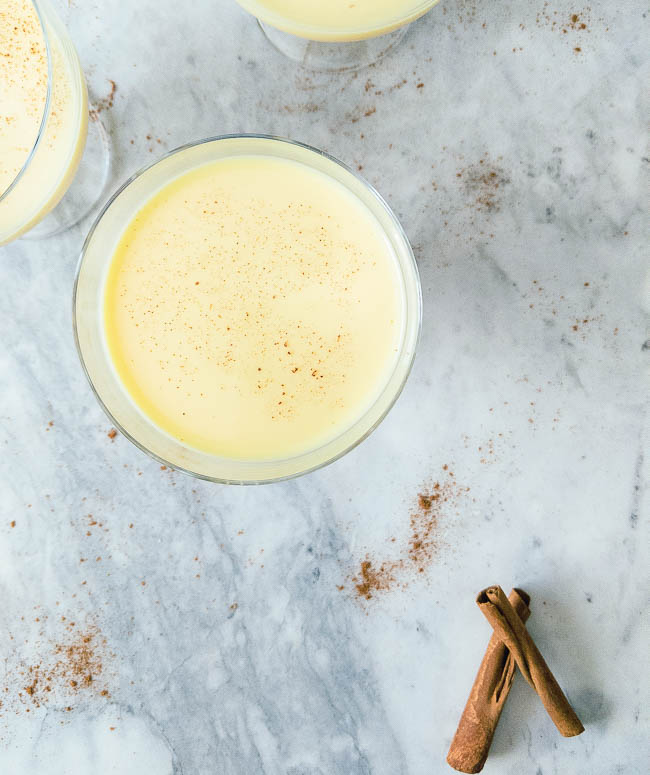 Crema de vie is a Cuban eggnog recipe and great way to spice things up at Christmas.

This year I’m staying in Havana until December 19th then heading home to the Maritimes for Christmas for traditional goodies like my Nanny’s Christmas cherry balls.

But I’m hoping to catch some of the festivities and I’ve been told it’s possible to find crema de vie well in advance.

The crema de vie cocktail was one of the things I was looking forward to most.

There are so many Cuban cocktails, but this is one is most common at Christmas and New Year’s Eve.

I couldn’t wait so I asked my friend for a crema de vie recipe in hopes I could master it in advance!

What is Crema de Vie

Also known as Creme de Vie. Although it literally translates to cream of life – it’s a bit of a peculiar name because crema is Spanish and vie is French.

But Cubans pronounce it crem-a deh vee-eh. How this happened I have no idea.

The best way to describe it is Cuban eggnog. It is served as an aperitif after dinner, in either shot glasses or small stemmed glasses.

Eggnog first appeared in England in the late 1800s when it was common to drink warm milk and eggs during cold weather, although often with brandy or sherry.

It’s most likely that the Cuban drink emerged from the Spanish invaders adding Cuban rum to their local nog drink.

It is also likely why similar drinks exist in other Caribbean countries like the cremasse in Haiti, coquito in Puerto Rico and rompope in Mexico as well as Christmas in Ecuador.

While each one varies slightly they all have a base of egg, dairy, spirit and sugar.

Crema de vie is a type of eggnog that is made during Christmas.

Although you may see it at some Havana restaurants, it’s more often something made at home.

It is often given as a present in a decorative bottle.

Interestingly, Christmas was once banned in Cuba. It existed before the revolution but then disappeared when Cuba became an atheist country.

Christmas only became an official holiday again in Cuba in 1995 just before the Pope visited.

So for a younger generation the holiday is completely new.

My friends still do not celebrate. They will have dinner with their family but no turkey, Christmas tree or presents.

Even at New Years, many tourists are confused as to why there’s no big party and that’s because most Cubans will stay at home instead of going out.

Cubans approach drinking in a way that I haven’t really experienced in other countries.

Although they make some of the best cocktails in the world, it’s much more common to go out and order a bottle to share.

And if you have a bottle of rum at your house it’s only polite to ask friends dropping in (and they do drop in often) if they’d like a drink.

That’s what made me so curious about this Cuban eggnog, not so much the actual recipe but how it’s shared during the holidays.

How to Make Crema de Vie

If you’ve ever been to Cuba you know that Cubans have a sweeeeeeeeeeeeet tooth.

Everything from Cuba Libres to Cuban coffee has far more sugar than you were expecting.

Crema de vie is no different as its ingredients include a substantial amount of sugar AND sweetened condensed milk.

It also includes rum, which I think is much needed to cut the sugar – even though ironically rum is made from sugarcane.

You can use whatever brand of rum you like white or dark. I think a spiced rum adds a nice touch.

In Miami, the exiled Cubans are loyal to Bacardi rum, which was also exiled after the revolution.

But for my crema de vie I’m using Havana Club as that’s what I often have at my apartment in Havana.

While this recipe can be easily made as a virgin cocktail it does contains raw eggs.

It is not recommended that young children or pregnant women consume raw eggs and you should always use the freshest eggs you can find.


How to Make a Simple Syrup

Over medium-low heat put equal parts of water and white sugar into a saucepan and stir.

Once the sugar has dissolved into the water remove from the heat and let cool. Easy peasy!

The key to this recipe is low and slow with the blender. You want to mix it thoroughly but it’s not necessary to beat the ingredients.

ALSO READ: The Best Christmas Cookies Around the World

Some people swear it lasts months as the rum acts as a preservative for the eggs.

While people have been drinking crema de vie Cubana for generations I haven’t and I don’t want to risk it.

This makes a large enough batch to take to a party but leave with an empty bottle.

Over medium-low heat put equal parts of water and white sugar into a saucepan and stir.Once the sugar has dissolved into the water remove from the heat and let cool.

In a blender, gently mix eggs.Add evaporated milk and condensed milk and gently blend until smooth.

Add simple syrup, vanilla and rum and gently blend until mixed through.   Garnish with ground cinnamon and/or a cinnamon stick. (optional)

Have you had Cuban eggnog before? If so let me know if my crema de vie recipe is similar to yours!

« A Beginners Guide to Cuban Coffee
How to Make Lardo »